The streets and shops are being spruced up with pine trees and tinsel. But for many Russian families, there will be precious little to celebrate this New Year. In Barnaul, a Siberian industrial city 1,800 miles east of Moscow, schoolteacher Tatiana Saveleva will be buying few presents for her family. In October Tatiana's husband, Dmitry, an engineer at a local railway repair factory, saw his and other employees' pay slashed by a third. By November the plant had switched to a four-day workweek. "A lot of people are suffering," Tatiana says. "It's all negative." 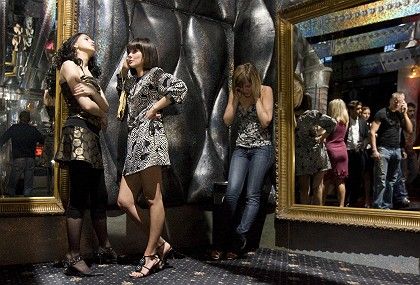 The party might be ending for Russia's oligarch elite.

Russians of all ages and classes are struggling to understand the krisis. "It has spread to the regions much faster than could be expected," says Andrei Kuznetsov, a strategist at investment bank Troika Dialog. "Companies are complaining of low demand, payment arrears, and limited financing."

That's a sharp change from just a few weeks ago, when the Kremlin played down talk of a systemic problem and most Russians assumed the downturn was mainly an issue for Western economies. Then the freezing of international credit markets exposed the heavy dependence of Russian banks and companies on Western loans. Russia is also being hammered by the fall in commodity prices: Oil, gas, and metals account for some 80 percent of exports.

In a recent survey by Ernst & Young, a third of major companies in Russia said they were planning job cuts, while 11 percent had already made them. On Dec. 1, TNK-BP, an oil company 50 percent-owned by BP, revealed that it was eliminating 390 of its head-office staff and leaving 200 job slots unfilled, equivalent to around 19 percent of head count.

The World Bank expects Russian growth of just 3 percent next year, while others warn the economy could shrink. In November, Russia's Purchasing Managers' Index of business activity was just 39.8 percent, the worst level ever in the index's 11 years of existence. Yes, worse even than in 1998, the year of Russia's colossal financial meltdown.

Could history be about to repeat itself? In the space of just four months, Russia has burned its way through $150 billion (€117.5 billion), a quarter of its total reserves, to support the ruble. Although the government has been pumping cash into the banks and has extended $50 billion in emergency credit to large companies, the package is doing little to kick-start lending.

As the ruble slides, Russian banks, companies, and households are converting their cash into dollars. The capital flight may force a precipitous devaluation of the currency. "The markets have concluded the ruble is at the wrong level," says Rory MacFarquhar, chief economist at Goldman Sachs in Moscow, who sees a 20 percent fall in the currency. A sharp devaluation would recall 1998 and risk an even more dramatic deterioration in confidence.

Is there any hope? "It's not going to change anyone's desire to be in Russia in the long term," says David Thomas, president of Volvo Cars in Russia. A lot depends, however, on factors outside of Russia's control, not least the price of oil. For families such as the Savelevs, the bleakness of the New Year may linger.