People like Brian Coulton aren't exactly the most popular figures in the financial industry these days. Politicians, in particular, aren't particularly keen on him and his ilk either. Coulton, the European chief analyst for the ratings agency Fitch, was largely responsible for the downgrading of Spain's credit rating late last month. It was a move that once again sent stocks tumbling in New York and the euro down against the dollar.

Coulton doesn't accept any of the blame. "We performed our assessment, and that's it," he said tersely. The reason for the downgrade, he added, is concern that the austerity program announced by Spanish Prime Minister José Luis Rodríguez Zapatero on the previous Thursday would throttle economic growth. He declined to comment further.

In the midst of the euro crisis, the highly indebted countries are embroiled in a grotesque dilemma. The rating agencies will punish them if they don't get their gigantic mountains of debt under control. But the same agencies will also downgrade them if the governments impose austerity programs to reduce their debts.

In this sense, the crisis is feeding the crisis, as a downward spiral gets underway. Many critics blame the major rating agencies, Moody's, Standard & Poor's and Fitch. "Whatever you do, you're doing it wrong," says Gustav Horn, head of Germany's Macroeconomic Policy Institute, referring to the countries in question. Berlin economist Michael Burda criticizes the timing of the Spanish downgrade most of all, which couldn't have been worse.

In the United States, where the rating agencies are based, they have long since lost their aura of infallibility. The agency that supervises the markets, the Securities and Exchange Commission (SEC), as well as dozens of companies and private individuals, have filed damage suits against the rating agencies for having failed entirely in their assessments of billions of dollars worth of investment vehicles backed by subprime mortgages.

Because the issuers of the toxic securities paid for their ratings, the agencies constantly found themselves in a conflict of interest. "We rate every deal. It could be structured by cows, and we would rate it," a rating analyst wrote in September 2007. Meanwhile, investors blindly trusted the overly rosy assessments, which contributed greatly to the eruption of the financial crisis.

Last Wednesday, two prominent industry leaders appeared at a Congressional hearing in Washington, D.C. In addition to Moody's CEO Raymond McDaniel, investing legend Warren Buffet, in his role as a major shareholder, attempted to downplay the blatant mistakes that were made. "The entire American public was caught up in a belief that housing prices could not fall dramatically," Buffet said under oath, calling it a "mass delusion." He said that he too was wrong.

But even if the ratings agencies have taken a beating since the financial crisis, an alternative rating system is not yet in sight. Credit ratings are still an important decision-making factor in the global web of financial transactions. Be it banks, insurance companies or investment funds, all of them manage a large portion of their investments with a view toward three letters: AAA, the highest rating. Should a country's credit rating falls below a certain threshold, many investors in those bonds, pension funds, for instance, have bylaws requiring them to sell. If the securities are on banks' balance sheets, regulators require more equity capital as a safety cushion.

As such, ratings often work like gasoline when poured on a fire. Countries lose billions when their credit ratings are downgraded. Investors pull out, causing bond prices to fall. And even though the bonds are then cheaper, they continue to provide the same annual interest, thereby increasing yields.

The effect means that governments have to pay more to borrow money. Spain, for example, will be facing much higher interest rates now when it seeks to refinance €16 billion worth of bonds which mature in July. The higher interest rates, in turn, makes borrowing riskier and makes the country more vulnerable to further downgrades, which in turn leads to even higher yields -- the beginning of a vicious cycle.

These concerns have prompted European Union Internal Markets Commissioner Michel Barnier to seek stricter controls on the three ratings agencies. Under his bill, the new Paris-based EU regulatory agency for the securities industry would also regulate the three ratings agencies, which has been the responsibility of national regulators until now. Barnier's proposals also call for a tightening of competition among the agencies. Issuers, like banks or financial companies, would be required to make all ratings information public, not just the information that relates to commissioned ratings.

Of course, the Frenchman's proposals only apply to securities that are used to package and resell loans and mortgages. This is where the EU Commission sees the greatest need for action, based on the experiences of the financial crisis. Ratings of companies or governments, on the other hand, would not be affected.

To break up the de facto US oligopoly, the French camp also advocates the establishment of a European ratings agency. In a recent interview with the German financial daily Handelsblatt, the governor of the French central bank suggested installing private credit insurers like Euler Hermes or Coface as new providers. "They have the knowledge and the relevant experience," said Christian Noyer, "and they even have to pay when the ratings are wrong."

Noyer's proposal was well received in Berlin, mostly because market leader Euler Hermes is a wholly owned subsidiary of Munich-based insurance giant Allianz. Its database contains information on about 45 million companies around the globe. Using this information, the company can calculate the probability of default and the corresponding insurance premium for almost every shipment in the world.

The question is whether the credit insurers will operate more reliably than the US agencies, and whether they will calculate credit risk in a different way, thereby solving the Catch-22 dilemma of debtor nations.

In fact, Euler Hermes has not yet downgraded Portugal, Spain and Greece in its internal country analyses. "However, we are working within a much shorter time frame than the ratings agencies," says CEO Wilfried Verstraete. He notes that 80 percent of the loans Euler Hermes insures mature within six to nine months.

Verstraete doesn't know yet whether Euler Hermes will get into the ratings business. Although internal teams have been addressing the issue since 2002, the market hasn't been ready so far. Verstraete believes that the current discussion over a European ratings agency is much more serious than it was two years ago.

"There is enough public pressure to bring about a change," he says, noting that many are now chafing at the three US agencies. The key question, says Verstraete, revolves around who will pay the bill for incorrect assessments. "We are liable for wrong decisions with our own capital, which is a completely different incentive system than with the ratings agencies," stresses Verstraete.

In his view, a credible business model can only function if investors, rather than the companies themselves, pay the ratings agencies to rate the securities that they hold.

Of course, the notion of competition isn't the only motivation behind the French campaign for a European rating agency. Many a politician and professor sees Moody's and the other two agencies as a US instrument of power. Rudolf Hickel, an economics professor in the northern German city of Bremen, believes that the ratings agencies are incorporated into the "system of interests" of the American financial sector.

Do the agencies act as a beachhead for Wall Street? And by downgrading the ratings of European governments, are they even deliberately providing the ammunition for American euro speculators?

"The accusation of American influence on European ratings is absurd," counters Alexander Kockerbeck, who is charge of analyzing two major economies, Germany and Italy, at Moody's in Frankfurt. According to Kockerbeck, a rating committee that decides whether to downgrade a country's debt by majority decision consists of "about 15 analysts from all regions of the world."

Economists like Kockerbeck can only partly understand the criticism of the ratings agencies they work for. They want nothing to do with their counterparts from the toxic assets departments, who were singing the praises of packaged subprime mortgages before the financial crisis. They like to point out that country specialists use fundamental analyses and not fly-by-night models to arrive at their assessments. They also have fewer conflicts of interests with which to contend. For image reasons, the agencies usually prepare country ratings at their own expense. Only a few governments, including some in Eastern Europe, commission ratings.

The wave of speculation against Greece was "triggered not by the ratings agencies, but by Greece itself," Kockerbeck says sharply. In the past, the country provided false information about the size of its deficit. When its real debt was revealed, the markets reacted with suspicion, which in turn made borrowing more expensive for Athens. "Based on the new numbers, our debt formula logically indicated a lower rating," Kockerbeck coolly explains.

The Moody's executive does not believe that governments face a rating dilemma. The causality is not that simple as is sometimes argued, he says. "A government's austerity plan is one thing, while its implementation is another," he says. If a country's economy suffers as a result of austerity measures, Kockerbeck explains, the costs of borrowing relative to government revenues will change in the medium term. For Kockerbeck, the consequence is clear: "We have to take this into account in a rating."

In his written rationale for the recent downgrading of Spain, Fitch analyst Coulton presents similar arguments to those of his counterpart at Moody's. But he apparently doesn't believe that those who are affected will be more insightful in accepting his assessment. To be on the safe side, Coulton isn't planning to vacation on Spain's Costa Brava this year. "I'm flying to Asia," he says. 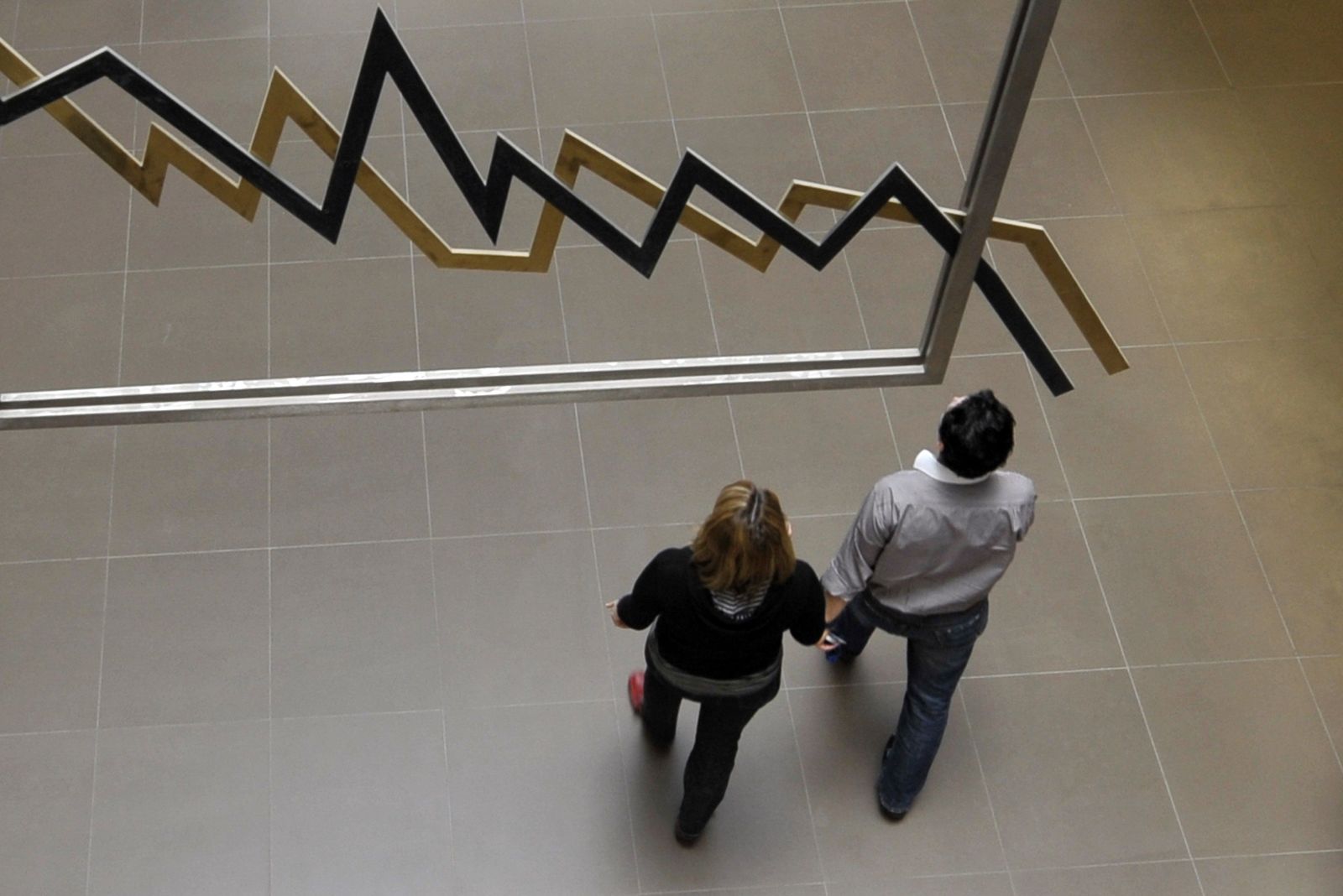 Ratings agencies have not been kind to European countries as they struggle with massive national debt.