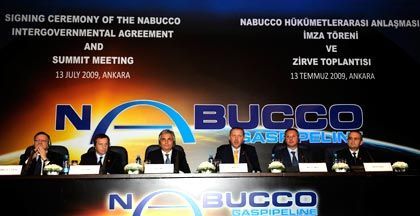 The negotiations dragged on for years but finally on Monday the Nabucco deal was sealed. Four European states and Turkey have agreed to build a pipeline across their territories in a bid to reduce energy dependency on Russia.

The prime ministers of Austria, Bulgaria, Hungary, Romania and Turkey gathered in Ankara to put their signatures to the Nabucco pipeline project, which aims to pump natural gas into Europe from the Caspian Sea via Turkey and the Balkans, thus bypassing Russia. The 3,300 kilometers of pipeline should become operational by 2014 and will have a capacity of 31 billion cubic meters of gas a year by 2020. The project will cost an estimated €7.9 billion ($10.9 billion.)

The European Union is backing Nabucco and EU Commission President Jose Manuel Barroso, who was at the ceremony, described the project as of "crucial importance for the EU's and Turkey's energy security."

He voiced his confidence in the viability of the project, saying "I believe this pipeline is now inevitable rather than just probable."

One of the key stumbling blocks has been the issue of which countries are actually to supply the gas. Azerbaijan is regarded as the primary provider but Turkmenistan, Iraq, Egypt and even Iran have also been mentioned as possible future suppliers.

Even though last month Azerbijain caused some jitters among Nabucco proponents when it cut a deal with Moscow to export gas to Russia from 2010.

On Monday, Iraqi Prime Minister Nouri al-Maliki who was in Ankara for the meeting, indicated that his country might be able to supply 15 billion cubic meters of gas. Iran is another possible source, although the political tensions between Tehran and the West make it unlikely that Iran will supply Europe's energy needs any time soon.

The Nabucco project will be in direct competition with Russia's South Stream project which will carry gas from Russia to Western Europe via Bulgaria. Russian energy giant Gazprom is also planning another project North Stream, which will run directly from Russia to Germany under the Baltic Sea.

The EU is keen to avoid a repeat of the energy crisis that occurred in January of this year when many European countries had to do without gas after deliveries of Russian gas were suddenly halted due to a price dispute between Moscow and Ukraine. Nevertheless Nabucco will have a marginal impact, as it can only carry around 5 percent of Europe's consumption.

Turkey meanwhile is looking at the project as an opportunity to revive its flagging hopes of eventually joining the European Union. Turkey's Prime Minister Recep Tayyip Erdogan said that the pipeline "will elevate Turkey to a significant position" for European energy security and Barroso praised Ankara's role in the project, saying it could open the door to a new era in relations between Turkey and the EU and beyond."