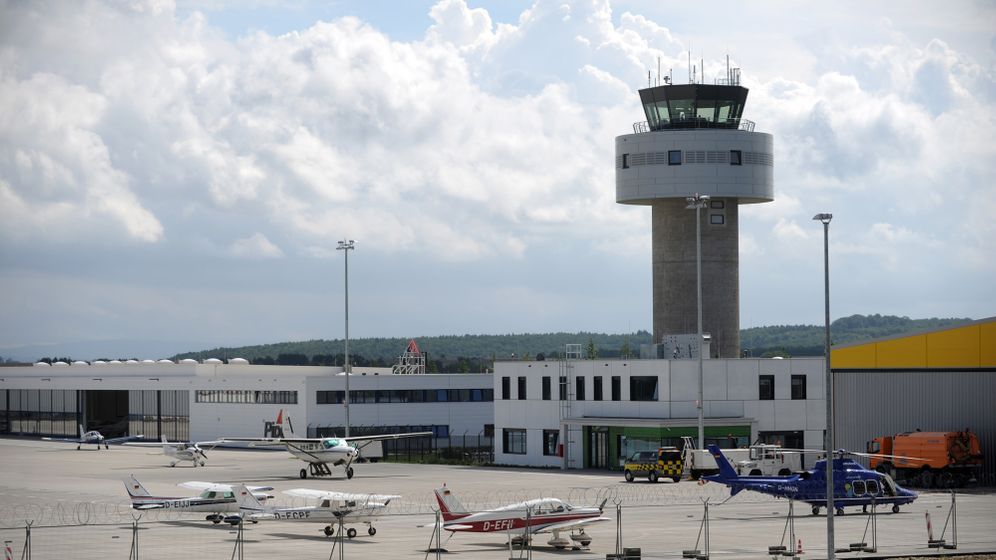 Photo Gallery: An Airport Fails to Get off the Ground

Maria Anna Muller smokes a Gauloise cigarette as she drives a black VW Touareg across the property. "It's just not true that nothing is happening here," she says.

Muller is the CEO of Kassel Airport GmbH. To her right is the brand new Kassel-Caldren Airport, which opened in April. There's a lot of asphalt, a small tower and a terminal. Muller proudly points to the new sewage facility built just for the airport. There's not much going on today. The pilot of a small jet practices takeoffs and landings and two private Russian aircraft are waiting on the tarmac for their passengers.

This is a normal day in Calden, where the €270 million ($372 million) airport has fallen into a sort of winter sleep only half a year after opening. There hasn't been a single scheduled passenger flight here since October. Local flying schools and a few private jets account for the few flights being processed.

The last major aircraft to land here was an Air Berlin jet chartered by the German government to transport Syrian refugees. The next planned commercial flights will commence in the spring, when a few holiday flights will offer service from Kassel. But even with that small amount of business, profitability is far from being achieved at this regional airport.

Muller says the airport has around 140 employees who also have to be paid during slow periods. She says many unemployed people got a second lease on life when they were hired and trained by the airport. For the time being, however, service personnel who would normally be working at the check-in counter have gone on vacation or are receiving additional training. But neither of those options will be enough to bridge the five months of near inactivity. Muller estimates the airport will have a loss of €6.6 million by the end of the year.

'We Have Plenty to Do Here'

When asked how workers are dealing with the situation, Muller responds: "We have plenty to do here," though it will take a while for business to grow at Kassel-Calden. "We just need more time."

Muller doesn't like it when people bad-mouth the airport, which she also considers a personal attack. The airport has already been subjected to numerous jabs -- from newspapers, television crews and politicians. It was even the butt of a joke on the German version of "Who Wants to Be a Millionaire?" The host said not a single person needed the airport.

Indeed, Muller is being forced to defend an airport that a few politicians insisted on building in the northwest of the state of Hesse despite countless warnings and against all reason, given the ease of access to major airports like Frankfurt in the region. Muller says repeatedly that the future will be better. She notes that Turkish Airlines has announced it wants to offer flights from Kassel-Calden. Besides, the airline industry is experiencing tough times, she says. Prior to heading the Kassel Airport, Muller was the CEO of the Rostock-Laage in northeastern Germany, another airport that has been spilling red ink for years.

Muller points to the runways and the grass between them. She begins listing all the things that need to be done here. The grass needs to be mowed, the snow removed, the lamps on the navigation lights must be tested. And rescue drills must be conducted to ensure her staff are prepared for disaster.

Sitting in the backseat of Muller's Touareg is Lars Ernst, the head of security and operations at the airport. He says the airport is legally obliged to be ready for operations at any time of day. But this also creates a dilemma for the facility, because it means it has to act is a full-fledged airport even when very little is going on.

Ernst's job is also to ensure that his staff have multiple skills. This means that the airport fire department staff potentially also have to mow the lawns or manage control corridors along the airport's fenced-in perimeter. "This allows us to make more efficient use of our staff," he says.

Ernst moved to Kassel with his family from Bremen, where he also worked at the airport. He says he was pleased to take on the challenge of building something new, and expected the airport to have a slow start, though perhaps not quite this bumpy.

The security operations manager says he and his colleagues like working for the airport and firmly believe in its prospects for success. "Our friends crack jokes about us because we work here," says Ernst. "It's not always easy."

Alexandra Khosravani operates the airport restaurant Up & Away together with her husband. Without any scheduled flights at the moment, the restaurant is primarily drawing walking groups, pensioners and other visitors from the region. They also make ends meet with birthday parties and other events, like the Christmas market the airport terminal hosted on Dec. 1.

All the negative chatter about Kassel-Calden Airport gets Khosravani down, too. She says her friends sometimes ask her why she bothers to drive to work in the morning. "That hurts," she says. She enjoys it here.

8 Bilder Photo Gallery: An Airport Fails to Get off the Ground
Teilen Sie Ihre Meinung mit