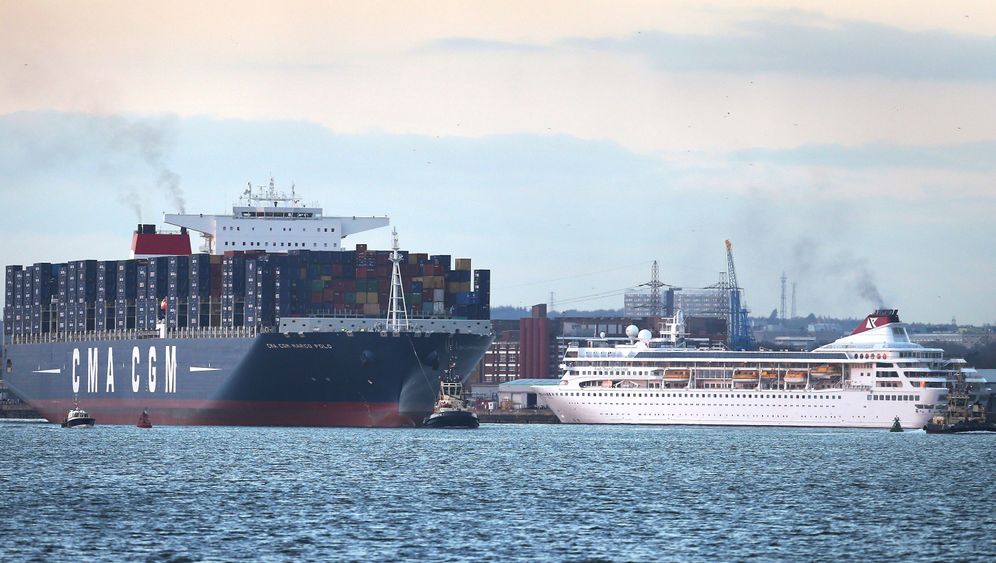 The residential areas along the banks of the Elbe River in Hamburg are among the city's most desirable neighborhoods, home to established merchant families. The views are magnificent, but sometimes the air quality is not.

Outdoor furniture and windowsills are often coated with a black, oily residue. The affected residents can only take comfort in the fact that they are being subjected to the excretions of an industry that has made Hamburg rich.

Ships are the dirt eaters of our mobile society, and although their contribution to global pollution is only minor (see graphic), they are a nuisance on a local scale. Their diesel engines burn heavy oil, the dregs of refineries. "It's more like a thick mush than a liquid," says Christoph Brockmann, vice president of the Federal Maritime and Hydrographic Agency in Hamburg. The highly viscous material has to be heated to 50 degrees Celsius (122 degrees Fahrenheit) so that it can be pumped through the fuel lines and into the engine.

Out of the chimney then comes the muck. Brockmann has a few photos on his mobile phone showing ship smokestacks emitting plumes of black and yellow smoke. Black is soot and yellow is sulfur. "These photos are ugly," says Brockmann, "we don't want that anymore."

Brockmann, who has a degree in oceanography, says that one of the drivers of change is an epochal switch in ship fuel from heavy oil to natural gas. It is the greatest possible leap the spectrum of hydrocarbons offers -- from the dirtiest to the cleanest fossil fuel. Fortunately, diesel engines tolerate both.

Transportation Minister Peter Ramsauer also wants this change. On Friday, he attended a presentation involving the testing of exhaust gases from a Caterpillar ship engine in Warnemünde, a seaside district of the northeastern port city of Rostock. The six-cylinder engine generates about five megawatts of power and can be switched from heavy oil to natural gas while running. The output remains the same, but pollutants disappear almost completely. Sulfur dioxide and soot levels sink to almost zero, while nitrous gases are reduced to about 20 percent.

Natural gas is actually usable on ships in its densest storage form, liquefied natural gas (LNG), which is cooled to -160 degrees Celsius and liquefied. In Scandinavia, some ferries are already operating on LNG. And Brockmann estimates that the freighters commonly used in the Baltic Sea could be operated with LNG with only minor reductions in cargo space.

Ramsauer is already talking about an "LNG National Action Plan," and German gas company Linde formed a joint venture last year with Hamburg ship fuel provider Bomin, to develop LNG infrastructure around the major ports in the North and Baltic Sea region. The first planned locations are in Hamburg, Bremerhaven and Rotterdam.

But the terminals will probably look deserted in the harbors for a while, because the German Ship Owners Association isn't exactly thrilled about the initiative. An expert report calls the use of LNG "desirable for the sake of the environment" and "technically feasible," and yet it also describes it as "(still) economically unattractive." Translation: Are you people crazy?

According to calculations by the Ship Owners Association, the costs of building a ship would increase by 15 to 20 percent, or a number in the high single-digit millions, above all due to the costly tank system.

But by January 2015, the ship owners' calculation could lead to different results. That's when new nautical exhaust regulations come into effect that, while not directly promoting ships operated with natural gas, will make the use of oil-based fuel drastically more expensive.

The International Maritime Organization (IMO) has declared the North Sea and Baltic Sea an "Emissions Control Area." Starting in 2014, the maximum allowable sulfur content in fuel, currently at 1 percent, will be reduced to only 0.1 percent for ships sailing in waters between the English Channel and the Baltic states. This practically takes heavy oil off the table, because a significantly purer refined product -- marine gas oil, which is chemically similar to the diesel fuel used in cars and is more expensive than heavy oil -- will be needed to satisfy the new requirement.

Highly polluting heavy oil currently costs about $600 (€450) per ton in most ports, while marine gas oil goes for more than $900. Large freighters consume up to 10 tons of fuel an hour, while ferries consume about two tons. For the ship owners, who have been operating in a permanent crisis since 2008, the ban on heavy oil is a serious blow.

Life-Threatening for the Shipping Industry?

"Someone should have looked at the price lists," says Hanns Conzen, managing director of the Lübeck-based shipping company TT-Line, which operates six ferries between Germany and Scandinavia. The IMO's verdict, which came at the request of the countries bordering the North and Baltic Seas, including Germany, is "life-threatening," says Conzen.

Fuel accounts for up to half of total ferry operating costs, depending on the length of the route, and more than three-quarters of costs for freighters. Conzen expects the new rules to add €2.5 million a year in additional costs per ship, which will ultimately be reflected in ticket prices. His most important cargo consists of haulage contractor trucks, which will immediately take the land route if it turns out to be cheaper.

The new pollution control measures in shipping channels could have a highly undesirable side effect, by shifting truck traffic back from the water to roads -- not exactly good for the environment.

Conzen feels forsaken by transportation policy. His fleet is still relatively young, and ferries have an average serviceable life of at least 40 years. Retrofitting the ferries for gas technology is virtually impossible, because of the lack of space in the engine rooms on ferries, which are designed to maximize cargo space. A retroactive tank installation would be all but unpayable.

A Solution for the Future

Not even Conzen disputes that LNG would be the solution for newly built ships. Natural gas has been getting cheaper for a long time, compared to crude oil, and commodities experts expect this development to continue. The price of liquid gas is already significantly lower than that of expensive marine gas oil and, in some regions -- in the United States, for example -- it is approaching that of heavy oil.

In addition, a ship owner who has invested in LNG no longer needs to fear additional action plans or other environmental initiatives relating to undesirable substances in exhaust gas. But marine gas oil emits soot and nitrous gases. The IMO will undoubtedly turn its attention to marine gas oil in the future.

Passenger ships, in particular, would benefit from the elimination of soot, because the exhaust gases are directly harmful to passengers. The German Nature and Biodiversity Conservation Union recently examined 20 cruise ships to be launched in the coming years. "For health reasons," the experts concluded, "taking a vacation on any cruise ship is not advisable at this time."

As a sign of goodwill AIDA Cruises, the worst of the polluters, recently laid down the keel on a new generation of ships, which can now operate with liquid gas, in addition to oil.