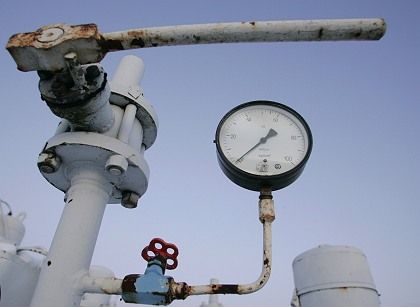 The arrow of a pressure gauge points to zero at a Ukrainian gas compressor station.

It has become a New Year's tradition: With the clock inching closer to midnight, Russia and Ukraine trade threats and accusations as talks over the next year's gas contract come down to the wire. The two neighbors squabble over the price Ukraine will pay for Russian gas, and the tariffs Russia will pay Ukraine for the use of pipelines that cross its territory, sending Russian gas to Europe.

Only once before did the situation get so dire that Gazprom, Russia's state-run gas monopoly, followed through on threats to turn off the taps. That was in January 2006, when Russia sought to hike prices sharply in the wake of the Orange Revolution that ushered a Western-leaning government into power in Kiev. But once again this year, Gazprom cut all gas to Ukraine on New Year's Day, arguing that Naftogaz, Ukraine's state-run gas company, had failed to pay its gas bill in full and that talks on a price for 2009 had stalled completely.

What's behind the dispute? Gazprom maintains that the conflict is purely commercial. In fact, both economic and political considerations are at play in both countries. That makes it likely the fight will drag on for several days or longer, in contrast to 2006, when the neighbors found a resolution within three days. Coming less than five months after Russia's heavy-handed war with Georgia, the dispute will surely raise questions about Russia's intentions toward its ex-Soviet neighbors, as well as its ability to reliably supply gas to Europe. The European Union imports about a quarter of its gas from Russia, and 80 percent of that amount travels through pipelines that cross Ukraine. The conflict with Ukraine also comes at a time when Russia has been trying to increase its sway among global oil and gas players, regularly attending OPEC meetings and floating the idea of setting up an OPEC-style group for the global gas industry.

The stakes are high. "There is potentially a lot more at stake here than just money," says Chris Weafer, chief strategist at UralSib, a Moscow investment bank. "Russia needs to win the PR war on this issue as much as it needs the higher price." Russia, he says, needs the EU to help fund new projects in the Arctic and East Siberia, costly because of the difficult conditions but necessary to boost Russia's lagging production. "Russia will not be able to do that alone and will need the EU both as a customer and an investor," Weafer adds.

Both Russia and Ukraine have been hit hard by the global financial crisis. Ukraine is one of the few countries that appealed to the International Monetary Fund for help, taking a $16 billion loan in November. Its currency has lost half its value since September, its economy is in deep recession, and thousands face layoffs as its mining industry grinds to a halt. The government, plagued by infighting between President Viktor Yushchenko and Prime Minister Yulia Tymoshenko, is paralyzed.

This state of affairs hasn't been lost on Russia, whose own miracle has been jeopardized as the financial crisis spreads to the real economy. The country's markets have lost three-fourths of their value since August. Industrial production slowed by 8.7 percent in November -- the most since the 1998 financial crisis. And the ruble has lost over 15 percent of its value in a managed devaluation that has squandered over $160 billion in foreign reserves since mid-November. Russian officials expect economic growth, which averaged 7 percent over the past five years, to dip to 2 percent this year.

Gazprom itself is mired in debt, and was recently included on a list of companies eligible for a government bailout. Its shares, which once valued the company at over $300 billion, making it the world's third largest, have fallen 76 percent since the financial crisis hit in September.

Eager to distract an increasingly worried population from the problems at home, Russia has filled the airwaves of state-run television with anti-Ukrainian propaganda. Yearend programs wrapping up 2008 gave equal coverage to political discontent in Ukraine as to the war with Georgia. One program ran a 10-minute profile of a Ukrainian man who spent the last year building life-sized dolls of Yushchenko and Tymoshenko and placing them in coffins. For its part, Gazprom has appeared eager to capitalize on Ukraine's political instability to get a better deal.

This year's row began in December, when Gazprom accused Naftogaz of failing to pay a $2 billion debt for gas delivered in 2008, precluding the start of negotiations on a contract for gas delivery in 2009. Naftogaz disputed the debt, finally caving in on Dec. 30 and taking loans from state banks to cover the payment. On New Year's Eve, Gazprom acknowledged that Naftogaz had transferred the payment to RosUkrEnergo, a middleman gas trader it half owns, but the funds had yet to appear on the company's accounts in Moscow. Further, Gazprom charged that Ukraine still owes $600 million in fines. Gazprom has also accused Naftogaz of threatening to siphon gas meant for Europe if the dispute wasn't resolved.

Naftogas has publicly denied Gazprom's allegations. But in January 2006, the company did tap pipelines destined for Europe to cover its own shortfalls in the midst of a harsh winter. Supplies dipped across Europe, sparking a loud outcry that pushed Kiev and Moscow to solve the dispute quickly.

This time around, Europe is better prepared. The economic downturn means less demand for gas, and most countries have built up storage capacity and reserves to last through a short disruption. If the dispute drags on for weeks, however, those supplies will run out. Britain, for example, has storage to weather a complete cut in supplies for 10 to 12 days. France and Germany could last as long as two months.

On Jan. 3, Gazprom said it had boosted supplies to Europe through three alternate pipelines that bypass Ukraine. But countries in Eentral and Eastern Europe are already feeling the crunch. Romania has registered a 30 percent decrease in supply since Jan. 1 and shipments to Poland have dropped by 11 percent. Bulgaria says it is missing out on 10 percent-15 percent of its daily gas delivery. "If the Russian side does not provide more gas (to EU member states) than at the moment, then in around 10 days there could be very serious technical problems," Yushchenko's energy adviser Bogdan Sokolovsky warned at a briefing in Kiev on Jan. 3. While Ukraine argues that it has slightly reduced the flow of gas to maintain pressure in its network. Russia says that its neighbor is stealing gas meant for paying customers in Europe and plans to take Naftogaz to international arbitration court in Stockholm.

The Czech Republic, which took over the rotating EU presidency on Jan. 1 and has its own tense relationship with Russia, has called an extraordinary session of EU envoys on Jan. 5 to address the crisis. But few analysts expect the dispute to be resolved quickly. No talks between Gazprom and Naftogaz are scheduled. And Gazprom has increased the price it wants Ukraine to pay from $250 per thousand cubic meters to $418, compared to the price of $179.50 it paid in 2008. Ukraine says it can pay as much as $235, but only if Russia agrees to pay more in transit fees for sending gas to Europe. Gazprom argues that Ukraine's leadership has failed to forge a unified position so that it can approach the negotiating table with one voice.

Eventually, Gazprom hopes to solve its annual problem with Ukraine by shipping gas directly to Europe. The company has grand plans to build pipelines that would send gas straight to Germany and through the Balkans to Western Europe. But the economic downturn has cast doubt on these projects. That means Europe will be getting much of its gas via Ukraine for years to come--once Russia agrees to turn back on the taps.