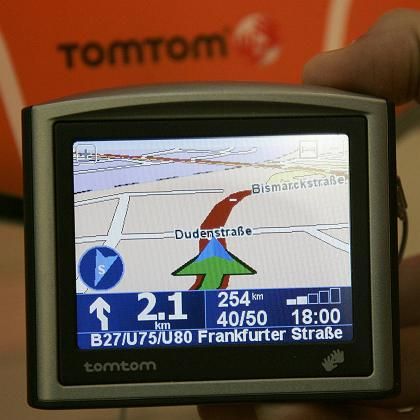 It's early on a gray, rainy Monday morning in Amsterdam. The highway to the city's Schiphol Airport is already a mess, as accidents, road closures and detours trigger traffic jams -- one after the other.

This is the perfect time for Luciën Groenhuijzen to be demonstrating his new secret weapon against gridlock. Groenhuijzen's motto -- when it comes to traffic -- is: knowledge is power.

"There must be a three-kilometer-long traffic jam after the bridge," he says. And, indeed, there is. Traffic starts slowing to a crawl the minute we exit the tunnel. Groenhuijzen is clearly pleased. He could have taken the exit just before the traffic jam ahead, if it weren't for the fact that he is here to demonstrate the astonishing capabilities of his new service called "High Definition Traffic."

Attached to his windshield is a handy navigation device with the awkward-sounding name "One XL HD Traffic," which has been available on the Dutch market for over a month.

Taking Back Control over Traffic Chaos

The only thing this miraculous little device has in common with the usual mass-market navigation systems on the shelves at consumer electronics stores is the cover. Instead of an installed digital card, the "high-definition" navigation system uses a fully networked, dynamic card. The data on the card is updated once every three minutes when it is downloaded from the mobile phone network. The information it emits is more like a constantly changing satellite image than a conventional map.

With a few clicks, Groenhuijzen pulls up a map of Amsterdam on the monitor. A red, worm-like image appears periodically on individual streets, indicating a traffic jam. The worm turns yellow when stopped traffic starts moving again, albeit slowly. It disappears when the traffic problem is cleared up. Then small warning symbols start appearing along the edge of the screen, indicating gusty side winds. 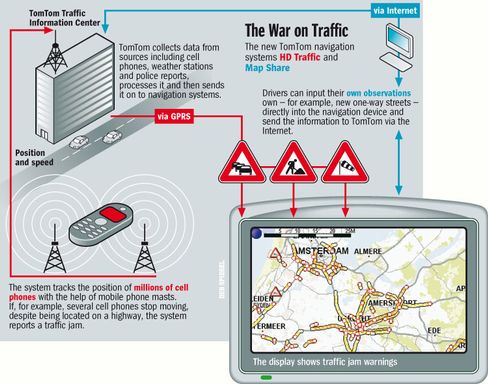 Anyone who stares at the screen for a while and follows the pulsing of the metropolitan area and the comings and goings of weather and traffic from a seemingly omniscient vantage point might be reminded of a virtual-reality game like SimCity. This is precisely the sense of empowerment Dutch company TomTom wants to sell its customers. "We want to give control back to people stuck in traffic chaos," Groenhuijzen says.

Other navigation devices also offer up-to-date traffic jam warnings under the brand name TMC, but they are actually often selective and not up-to-date. In most cases, updates with TMC are based on the same information as radio traffic reports.

TomTom, on the other hand, uses a completely new gridlock warning technology: the motion patterns of mobile phones. Mobile wireless company Vodafone constantly monitors where its phone users are at any given time. It now transmits the data -- in anonymous form -- of millions of Dutch customers to TomTom for analysis. The principle is simple: If a large number of mobile phones are moving along a highway at a snail's pace, there must be a traffic jam.

The mappers who assemble the electronic traffic atlas work in the Traffic Control Center at TomTom headquarters on Rembrandtplein, one of Amsterdam's most popular squares. "On a normal Monday morning, we analyze hundreds of incidents and 900 kilometers (560 miles) of traffic jams," says Groenhuijzen, pointing to four giant screens depicting the traffic situation throughout the Netherlands.

While the government agencies that produce traffic reports monitor only 2,300 kilometers (1,430 miles) of roads, Vodafone's mobile phone locating system covers 10 times as much, including quite a few regional roads and feeder roads. Government and private traffic warnings, along with weather reports and other information, are then thrown together, and the whole package is transmitted to customers on the road via the mobile phone network (GPRS). So far, the system is only available in the Netherlands, but it will soon be introduced in Great Britain.

The new service marks a paradigm shift for TomTom. In the past, the company only sold devices. But now that dozens of competitors have entered the market, prices have plunged. As a result, the company is expanding its business to include services. The new One XL device costs about €400 ($588), which includes a year of traffic warning service. After that, customers pay a monthly fee of €10 ($14) to continue using the new high-definition navigation system. If they don't pay the fee, the device becomes an ordinary navigation tool that still takes them from point A to point B, although without accounting for traffic.

A major shake-up is taking place in the navigation industry. Finnish mobile phone manufacturer Nokia now installs satellite receivers in many business-oriented mobile phones and upgrades them to function as navigation devices. Navigation is serious business for mobile phone manufacturers, as Nokia revealed in October when it announced plans to buy Navteq, one of the two major manufacturers of digital cards, for more than $8 billion (€5.5 billion). TomTom will soon follow suit when it buys Tele Atlas, the other leading digital mapping company.

"For us maps are not rigid data sets, but extremely dynamic, almost alive," says Peter-Frans Pauwels, one of the founders of TomTom. "Our concept is called 'Navigation 2.0.'" TomTom's hotline has long fielded thousands of calls from customers complaining about inaccurate maps. Now Pauwels hopes to turn the problem into a source of profit. Starting this summer, customers who discover a map error can correct it directly in their device and transmit the correction automatically to TomTom.

The system is called "Map Share." Borrowing the concept from Wikipedia, the collective Internet encyclopedia, the system enables TomTom to use each map-user as a potential cartographer, with the difference being that TomTom owns the corrected maps.

But what happens when someone, hoping to reduce traffic noise outside his apartment at night, decides to report his street as being blocked on the digital map? A team of employees from a dozen nations works on the top floor at TomTom headquarters to prevent precisely that from happening.

Each month, the company receives roughly 80,000 suggested changes from users. TomTom's analysts carefully examine the plausibility of many of the messages. The work is paying off: In recent years, for example, 25,000 intersections have been converted into traffic circles throughout Europe. "It used to take one to three years until a correction reached the customer," says Pauwels, "but Map Share has enabled us to finally close the feedback loop."

One question remains: Will these innovations eventually be capable of preventing traffic jams altogether? "No," Pauwels quickly says. If he is sure of one thing, he says, it is that "we can contribute to better capacity utilization of the road network. But we don't solve traffic problems; we just help people deal with them more intelligently."