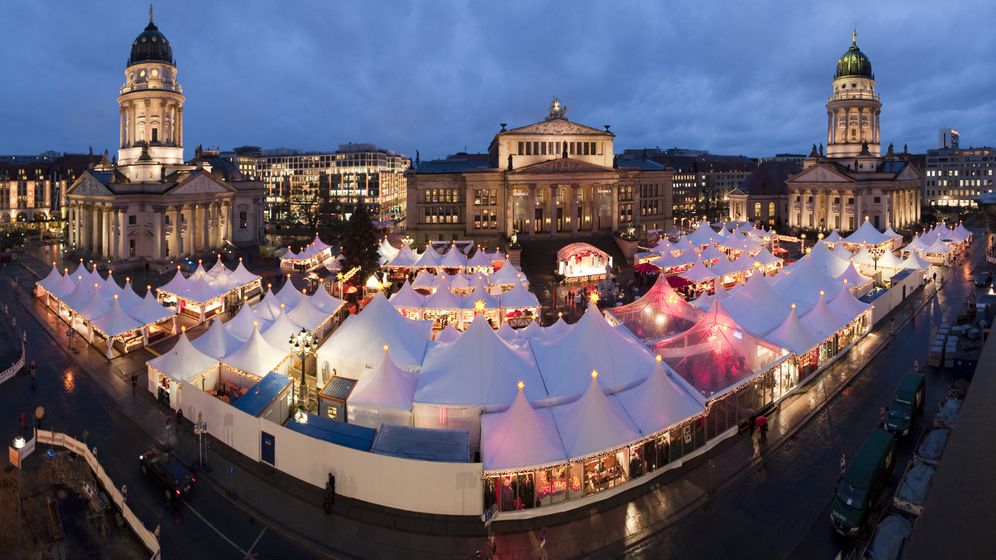 Gerd Tönnesch spends 11 hours a day holding a racoon in his hand. He gets paid €1.30 ($1.90) an hour for his job at a local Christmas market. He lets the racoon crawl up his arm and snap at the hand of an 11-month-old baby. The baby laughs and grandma joins in on the fun, buying the hand puppet for €25. But even if Tännesch spent the whole day selling puppets, there's no way he could afford a furry toy of his own. "I would have to work until I was dead," he says.

Tönnesch is 65 years old, and though he does receive a pension, at €570 a month it isn't enough for he and his wife to get by on. To make ends meet, he is working for a plush toy company. He earns €400 a month manning the stall at a Christmas market, despite a long day that begins at 10 a.m. and doesn't end until 9 p.m. and a seven-day working week. His wife visits his stand almost daily and helps out with the work. Though Tönnesch is being exploited, he claims to not see it as such. "It's wonderful to hear children laugh" he says, smiling. "We love this work." Tönnesch has asked that his real name not be used in this story in order to prevent possible repercussions by his employer.

Tönnesch is an extreme case. The stallkeeper industry association BSM estimates that some 188,000 people work at some 2,500 Christmas markets across Germany. Even if most aren't subjected to dumping wages, they still exist -- just as there are high earners, market leaders and idealists. The Christmas market, after all, is a microcosm of the German business world: The decisions are made by influential private individuals, industry associations and politicians. So who is better equipped to operate the Christmas markets -- the state of private operators?

No one knows exactly how much revenue Germany's lucrative Christmas markets generate, but industry groups and analysts believe the figure hovers somewhere been €3 billion and €5 billion. Visitors to the markets spend an average of €27 to €30 per person. The money goes to to the merchants, but also to other businesses somehow connected to the markets, like taxi drivers, public transporation and hotels that profit from the industry too. Officials in Munich recently estimated that the city's popular Marienplatz market is responsible for pumping €175 billion into the local economy.

'I Can Only Be Reflective When the Cash Register Is Ringing'

Hans-Peter Arens sells roasted ham in Dortmund, and his son works a few stands away, where he serves one of the main staples of German Christmas markets: mulled wine, which is called Glühwein in Germany. Arens is the fourth generation in his family to work as a Christmas market seller. Even as a kid he played in the stall where his family sold roasted almonds.

"We never enjoyed Christmas, even when we were children," he says. "I know that the church encourages reflection, but I can only be reflective when the cash register is ringing." Today he's the president of industry association BSM.

As is the case for Arens, the Christmas season is decisive for the incomes of most of the families working at the markets. Business at the Christmas markets is responsible for half of all income, he says. In addition to running the industry association, Arens is also one of the organizers of Dortmund's popular Christmas market. As such he holds a true position of power, since it is up to him to decide who gets a stand in the market and where it will be located.

Competition for space is stiff. At the larger markets, there are as many as two applicants for each available stand. Between 70 and 80 percent apply to open Glühwein stands, the business that Arens says is the most profitable at Christmas markets. In 2002, BSM estimated that the average mulled wine stand has sales of around €50,000 in a single season. Other stallkeepers, on average, have half that turnover. But strict rules prevent a glut of supply: Only one Glühwein stand per 5 or 10 different stands is permitted in each market. "The public would probably like more, but there has to be a mixture of stands," Arens explains.

To make the economic environment more accomodating for other vendors, including artisans whose profit margins are a lot smaller, Glühwein sellers are typically charged higher rents. In Nuremberg, for example, which is home to the world's most-famous Christmas market, sausage and mulled wine sellers must pay €522 in rent per season. But sellers of Christmas tree decorations only have to pay €83. Most sellers prefer not to discuss how much is left over in profits. "With small scale businesses, no one likes to discuss how much they earn, even amongst each other," Arens says.

But it is not only the small scale traders who prefer to keep quite about their profits. Larger companies that sell their products at Christmas markets also keep their profits secret. Nuremberg's Gerstarker is the market leader in producing mulled wine in Germany. The company claims that 80 percent of the cups of Glühwein served up in Germany come from its factory. Few of the stalls make their own wine, and the price of wine depends on the quantities purchased and a trader's bargaining skills.

"Of course the interests of a private operator are different from those of a city," says Dirk Hilbert, a deputy mayor in Dresden responsible for business relations. Dresden is one of the city's that still runs its own famous Christmas market, the Striezelmarkt. The city recently invested €600,000 in themed areas for children and demonstration workshops. "These areas will no longer be available for businesses at the market," the deputy mayor says. But in contrast to private operators, the city is more concerned about operating attractions that will improve the city's image in the longer term and attract more tourists. Still, he says that privately run Christmas markets in other parts of Dresden are just as popular with local residents as ones run by the city.

Importing Artisans from the East

In the competition for visitors, the supply of artisans is quickly drying up. In recent years, shopping centers have vied against Christmas markets to pull in artisans willing to sell their wares in their own small markets. They provide free stands and heating, which is often an attractive alternative to renting a stand in a cold city market square. The competition has gotten so fierce within Germany that one popular Hamburg Christmas market had to recruit potters and blacksmiths from Ukraine. But one artisan has been a presence at the Gerhart Hauptmann Platz market for the past 39 years. Sixty-five-year-old gold and silversmith Angelo Motta gets €450 a month from his government pension. "Money doesn't mean a lot to me," he says. "I am satisfied."

He says his true career goal was to become a monk. In a cloister in Canossa, the Sicilian learned the art of jewelry-making. Motta sys he doesn't even know how much money he makes from the jewelry -- he just loves designing and making it. In order to afford the materials, he has to sell it once a year. "In all truthfulness, I'd rather give it away," he says.