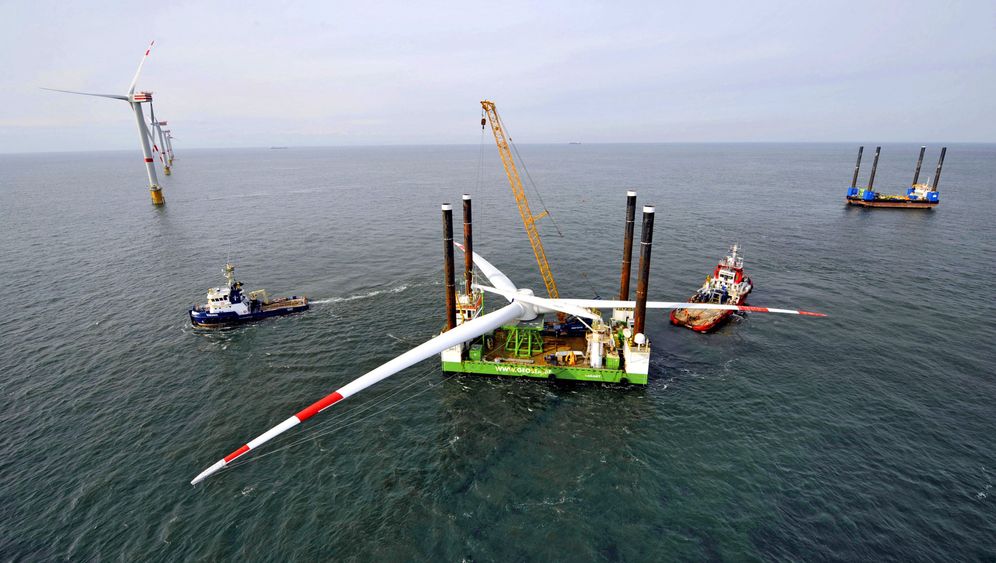 Whenever German Chancellor Angela Merkel visits one of her country's four major electric utilities, it is bound to have symbolic significance. This was the case when the chancellor and Jürgen Grossmann, the CEO of electric utility RWE, visited the Emsland nuclear power plant near Lingen in northern Germany last year. Merkel's message was clear: German nuclear power plants are safe. And they will be needed for years to come to ensure that the country's energy supply remains affordable and stable.

But after the catastrophe at Japan's Fukushima nuclear power plant, Berlin's energy policy changed dramatically. And an event Chancellor Merkel is scheduled to attend on May 2, together with officials from the electric utility EnBW, comes at a convenient moment. On that day, the chancellor will not be touring a nuclear power plant. Instead, she will be headed out to sea or, more precisely, to a point in the Baltic Sea 16 kilometers (10 miles) off the Zingst Peninsula in Western Pomerania.

Energy giant EnBW has almost completed the first commercial offshore wind farm in the Baltic Sea at the site, and Merkel will inaugurate it.

Twenty-one giant wind turbines -- each 130 meters (425 feet) tall -- will jut out of the water over an area of seven square kilometers (2.7 square miles). When the wind is strong, they will feed about 185 gigawatt hours of electricity into the grid each year, or enough to supply 50,000 households with green energy.

The EnBW wind farm is only the beginning, assuming the German government is more faithful to its new energy concept than it was to the old one. It has been six weeks since the reactor accident in Japan, and the first cornerstones of the new policy are already clear. Merkel's administration, though, has yet to decide how many nuclear power plants must be replaced in the near future, and how much longer the remaining plants will remain in operation.

It is clear, however, that wind energy will assume the central role in the energy about-face envisioned by Merkel and Environment Minister Norbert Röttgen, both of the center-right Christian Democrats. They laid out ambitious goals at a meeting with German state governors two weeks ago. And to meet those goals, the government plans billions in subsidies and loans.

The plan foresees that by 2030, offshore windparks will have a combined capacity of 25 gigawatts -- equivalent to 20 nuclear power plants. To get there, energy providers will have to install several offshore wind farms each year. Although they have repeatedly pledged to make the necessary investments, implementation has been sluggish. Projects like "Baltic 1" and the "Alpha Ventus" research project completed last year by utilities E.on, Vattenfall and EWE seem more like alibis than the real thing.

When building wind farms in the North Sea and Baltic Sea, the operators must overcome substantial obstacles. To protect coastlines and tidal flats, German authorities have required that wind turbines be located up to 40 kilometers from the coast. While neighboring countries like Denmark need just a few months to build wind farms in shallow waters within view of the mainland, German engineers must cope with water depths of up to 50 meters (164 feet).

Specially designed ships are needed to anchor the foundations and build the towers. The effort is comparable in scope with the first expedition to the moon, says Fritz Vahrenholt, head of RWE's renewable energy division.

Furthermore, operators face tough resistance from environmentalists. Currently, the harbor porpoise is of great concern. The loud noises produced when the foundations are rammed into the bedrock could harm the animals' hearing and sonar systems, fears Beate Jessel, the head of Germany's Federal Agency for Nature Conservation.

Great Britain has solved this problem by merely chasing away the marine mammals during the construction phase using sonar buoys which produce a sound unpleasant to the animals. Germans, however, have shown little appetite for such a pragmatic approach.

Instead, government agencies are calling for construction to be suspended between May and August. A farcical policy say Germany's utilities: It is virtually impossible to work on the wind turbines during the stormy winter months.

In addition, the grid connections and high-tension power lines are still in short supply along the country's coastline, making it impossible to transport the electricity to Germany's economically powerful south. Such realities have not exactly proven a magnet to investors.

Despite billions in subsidies, concludes a study by the management consulting firm KPMG, returns are higher in neighboring European countries. As a result, while E.on and RWE are among the world leaders in offshore wind park construction, they have been holding back in Germany, a country which is fond of touting its pioneering role in alternative energies.

The industry is gradually losing hope that this situation will change in the foreseeable future. And some have begun betting on a new strategy, which is in fact the old strategy: building turbines on land again. "Onshore is much easier, much cheaper and much faster," says Andreas Nauen, managing director of the Hamburg-based turbine manufacturer Repower.

Scientists at the Fraunhofer Institute for Wind Energy and Energy Systems Technology in the central German city of Kassel have studied the options on land. They believe it is realistic for Germany to make 2 percent of its land area available for wind power, which would make it possible to operate about 63,000 turbines, or almost three times as many as today. According to the Fraunhofer study, southern Germany is particularly promising and holds enormous potential.

Indeed, southern Germany has neglected wind energy until now. In Bavaria, it constitutes no more than 1 percent of total power generation. And the southwestern state of Baden-Württemberg is in last place among Germany's large states, with 470 megawatts of installed wind capacity. By comparison, the northern state of Lower Saxony has 6,660 megawatts.

Is the Future on Land After All?

This imbalance is not merely a result of the wind blowing more strongly in the north. There are also other phenomena in play -- such as the wood grouse population in the central Black Forest.

For the last five years, local resident Andreas Heizmann has been trying in vain to obtain a permit for a new, more powerful wind turbine to replace an older one, a process industry experts call "repowering." Heizmann is one of 76 shareholders who operate the turbine, located on a plateau on top of the Brandenkopf, a 945-meter (3,100-foot) mountain. A fantastic location, Heizmann raves, if it weren't for the problem with the birds.

The Forest Research Institute in Freiburg fears that the turbine could restrict wood grouse habitat. Worse still, the regional authority has identified the slope behind the Brandenkopf, where there is little wind, as a preferred area for wind power, and not the Brandenkopf itself. "It's as pointless as putting a solar panel under your bed," Heizmann says heatedly.

Many a project has failed because of such obstacles. Mostly though, projects in the relatively wind-poor south have been avoided because profits are low. But technical advancements could change that. Rotors will be longer and lighter in the future. Plus, whereas towers have thus far tended to be 50 to 70 meters tall, they will rise over 100 meters in the future. While that is sure to increase opposition to wind turbines, an industry rule of thumb has it that each additional meter in height increases profits by 1 percent.

Wind turbine manufacturers have high hopes for repowering. By next year about one third of the installed turbines will be at least 12 years old, and the industry expects operators to replace some of the older turbines with the latest generation -- as long as they can expect to recoup the costs. That, however, is not a given. Older turbines have already been depreciated, minimizing operating costs. It is essentially free money -- and has lowered the incentive to invest millions in new technology.

It is up to turbine manufacturers, it would seem, to work on their sales pitches, particularly those in Germany. Thanks to billions in subsidies, German makers are pioneers in the field. Companies like Enercon in Lower Saxony or Fuhrländer in the Westerwald region invented the industry a quarter century ago, and German manufacturers long dominated the world market -- until new competitors appeared on the scene and displaced them at the top.

Not unexpectedly, those new competitors are from China, where about 60 to 70 companies have been established and have made enormous progress in a very short amount of time. The new companies are still focused on the domestic market, where they have a lot of catching up to do. In 2010, wind capacity of 19 gigawatts was connected to the grid in China -- more than half of all wind turbines installed worldwide. China now produces more electricity from wind than any other country. Eventually the Asian products are bound to find their way into the European Union market.

Indeed, they are already trying to gain a strategic foothold in Europe through corporate takeovers. Three years ago, for instance, the Chinese company Goldwind acquired Vensys Energy, a manufacturer in the German state of Saarland. Large South Korean companies are also showing an interest in investing in German companies. Daewoo, for example, owns Dewind, a turbine manufacturer in the northern German city of Lübeck. And Hamburg-based Repower is likely to be entirely in Indian hands soon.

Conversely, the Asian market, especially China, remains largely closed to German manufacturers. This puts the German pioneers in a tight spot. There will be a shakeup in the wind energy sector, says Manfred Hader, a partner with the Roland Berger strategic consulting firm. According to Hader, not every member of the old guard will survive the consolidation process. Only those that can grow internationally, he adds, will stand a chance of doing well in the market.

This presumably includes Siemens. The Munich-based company has assumed a leading global position in offshore technology, and because of its financial power it can maintain a presence in all key regions. It is the kind of clout that Nordex, a wind turbine manufacturer based in Hamburg, could use. The company is currently focusing its efforts on the high seas, recently unveiling a six-megawatt turbine designed specifically for offshore use. Competition, though is stiff. And Nordex, while too big not to play a role, is too small to be truly important, says one observer. In other words, it's a takeover candidate.

Enercom, the German industry leader, for its part, has chosen to focus entirely on the domestic, onshore market. Its products, recognizable by their green base and drop-shaped gondola, have an excellent reputation and are priced accordingly. And despite holding a 60-percent market share in Germany, the family-owned company is hardly on the way to becoming a global player.

Not all of the pioneers of wind power will be able to benefit from the energy turnaround. Other countries, particularly Great Britain and Denmark, are outflanking Germany in the offshore market. And on dry land government agencies and citizens often stand in the way of rapid expansion. In the end everything depends, of course, on whether the wind blows strongly enough in the first place. But even that isn't guaranteed.

Climatologists have now discovered that the wind does not blow as consistently as previously assumed, even at sea. Apparently fluctuations in atmospheric pressure over the North Atlantic have produced alternating strong and weak wind periods over the last 130 years. This alone would not be particularly dramatic. However, say the scientists, the periods of weak wind could last for several years -- making a mockery of the existing calculations.