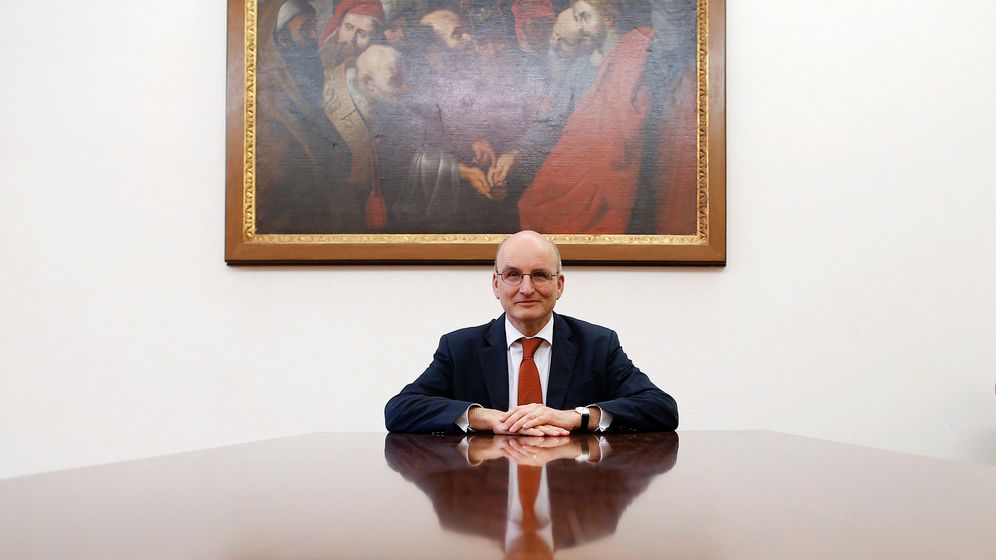 Photo Gallery: Offshore on the Tibor

In late May, two Germans stood in the heavily guarded interior of the Vatican Bank and gazed out over St. Peter's Square. Ernst von Freyberg, 54, had just been appointed as the bank's president -- and now he had been interviewed by Father Bernd Hagenkord, the director of Vatican Radio's German program. The two servants of the Catholic Church took stock of what had been achieved thus far and concluded that the head of the bank had survived his baptism by fire.

"I am convinced that we are a well-managed, clean financial institution," Freyberg had said into the microphone. He also rhapsodized over the morning masses with the pope in Saint Martha's House and found words of praise for the bank's directors. "When I came here, I thought I would primarily have to do what is generally known as a cleanup," Freyberg admitted, "but I haven't, as yet, discovered anything amiss."

The aristocratic bank president -- who in his spare time organizes pilgrimages to Lourdes for people with physical disabilities -- apparently had to rapidly and fundamentally change his opinion. Indeed, at virtually the same moment when the interview was broadcast, over 20 experts from the US consulting firm Promontory Financial Group marched into Niccolò V, a fortress-like medieval tower, to comb through some 30,000 accounts that customers around the world maintain with the papal bank. The external auditors are specialized in detecting and tracing irregularities like corruption and money laundering.

A History of Scandals

The specialists from abroad have also been hired to determine who is actually behind the deposits at the Vatican Bank and what is transpiring on the individual accounts. According to the bank's statutes, the financial institution of the church-state is charged with providing a home for funds belonging to members of the clergy and religious orders. As the auditors of the Vatican Bank dug deeper into the nature of the accounts, however, it became increasingly clear that a large number of individuals -- who actually shouldn't even be allowed to have accounts at the Vatican Bank -- highly appreciate its discreet business practices.

The church-state has sought the aid of a consulting firm as part of a change in strategy in which it is moving away from secrecy and toward more integrity and transparency. In fact, the Vatican has been troubled by affairs surrounding its bank ever since the Commission for Works of Charity was established in 1887. This served to protect church assets from the Italian state's appetite for expropriation. Over the decades, this financial institution, which was later rechristened as the Institute for Religious Works (IOR), appears to have been involved in a number of shady deals: There have been allegations of Sicilian mafia money laundering, stock market manipulation and illegal transactions worth billions funneled through the bank.

The Vatican Bank also played a key role in the 1982 collapse of Milan's Banco Ambrosiano, the largest bank crash in Italian history. Shortly thereafter, the bank's chairman was found hanging from a London bridge. It turns out he was murdered. In the 1990s, Italian industrialists used the church's spin-off to launder huge bribes for politicians.

The scandalous reports surrounding the financial institute reached their latest peak in May 2012, when church officials suddenly ousted then-bank head Ettore Gotti Tedeschi in the midst of a money laundering investigation by Italian justice officials and the Vatileaks scandal. Now that the investigation against Gotti Tedeschi has been closed without any charges being pressed, there are growing suspicions that he had to leave for other reasons. In his struggle to implement international standards at the institution, the bank president had evidently had a falling out with other powerful Vatican officials.

This, in any case, is suggested by a confidential memo that Gotti Tedeschi gave to his secretary two months before he was fired. Leading employees at the bank had told him that he would "go into history as the man who destroyed the IOR," he wrote.

Absolute discretion and protection from criminal prosecution by secular authorities have long been the trademarks of the Vatican Bank. It wasn't until 2010 that the church-state gave in to considerable pressure from the European Union and moved to ban money laundering and terrorism financing on its territory.

Is the Vatican a Tax Haven?

Gotti Tedeschi compiled a dossier in which he described the problem that the auditors from Promontory have discovered: customers who, according to the bank's statutes, are not allowed to have accounts at the Vatican Bank, which "could be one of the reasons for the difficulties that we are facing," wrote the former bank president.

It's now clear that in the shadow of St. Peter's Basilica over 1,000 people conduct banking activities who cannot be ascribed to the Holy See, or a church organization or a charitable foundation. They benefit from the fact that there are no taxes in the Vatican -- and that the Vatican is extremely tight-lipped in its exchanges with public prosecutors. For decades, transfers have been made near the Apostolic Palace that hardly differ from business as usual on the Cayman Islands. In essence, the Vatican Bank has become an offshore paradise on the shores of the Tiber.

Insiders have told SPIEGEL that over €300 million ($407 million) was still on these accounts this past summer. "The vast majority of this" is apparently illicit earnings, the sources say.

As part of his cleanup efforts, the new head of the bank, Freyberg, has had a letter sent to the owners of these accounts. The sad message is that the IOR intends to end the business relationship. The valued customers will have to transfer their money to another location.

By all appearances, though, these were not the only problematic customers at the bank. Astonishing transactions also take place on the accounts of church dignitaries. The misconduct by Monsignor Nunzio Scarano -- until recently an auditor at the Administration for the Patrimony of the Apostolic See -- is so obvious that the clergyman has been taken into police custody. According to investigations by Italian justice officials, Scarano attempted to have €20 million flown in from Switzerland with the help of an intelligence agent. "Don 500," as he is known in the Vatican due to his preference for large bank notes, had a number of accounts at the Vatican Bank.

The clergyman, who denies any wrongdoing, used these accounts to shift over €5 million within just a few years. On a number of occasions, he transferred money from one tax haven to the Vatican Bank, and then rapidly sent it to another financial haven. The investigative report of the financial auditors meticulously listed all transactions -- and harshly criticized bank managers. Bank employees apparently did not realize when they had to voice suspicions of illegitimate transactions. The auditors said that bank executives had to change their tone.

Freyberg has reacted and forced the bank's director general and his deputy to resign: "It's clear that we need new management to accelerate the reform process," he said.

By the end of the year, Freyberg -- who last week published the first annual report in the Vatican Bank's history -- hopes to have completed his cleanup work. By then, Pope Francis will also have to decide on the bank's future. "Some say the best thing is to have a bank, others say it should be a relief fund, others recommend it be closed down," the pontiff said as he outlined his options in July. "But whether it's a bank, a fund, or whatever, it should be based on transparency and honesty," he concluded.

Transparency and honesty -- that seems to be right in line with Freyberg's approach. But for the bank and its customers, it's a cultural shock. 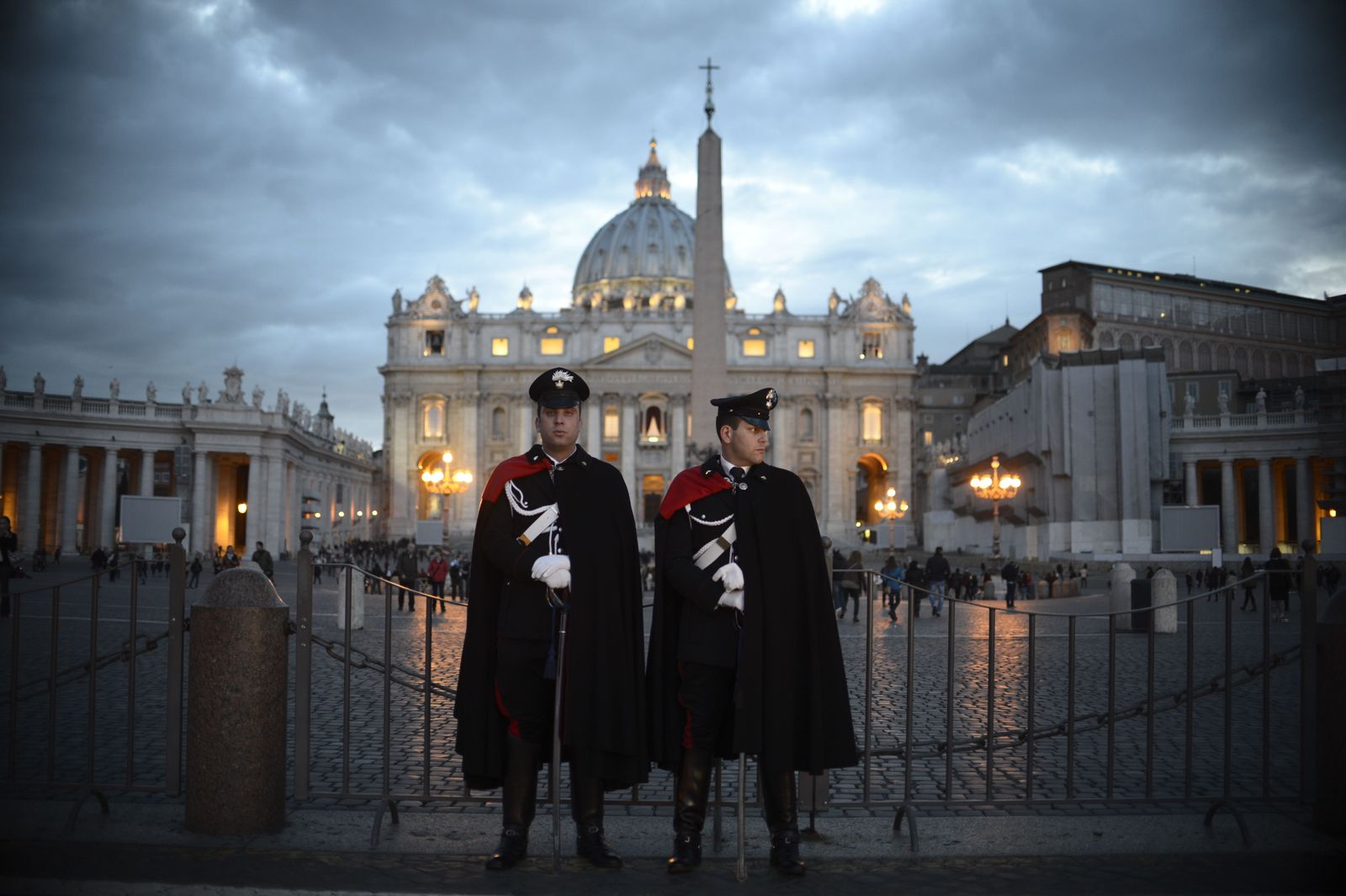 Insiders have told SPIEGEL that over 300 million euros ($407 million) was still in accounts held by over 1,000 people. "The vast majority of this" is apparently illicit earnings, the sources say. It's now clear that in the shadow of St. Peter's Basilica, tax haven-esque things are happening. For decades, transfers have been made near the Apostolic Palace that hardly differ from business as usual on the Cayman Islands. In essence, the Vatican Bank has become an offshore paradise.