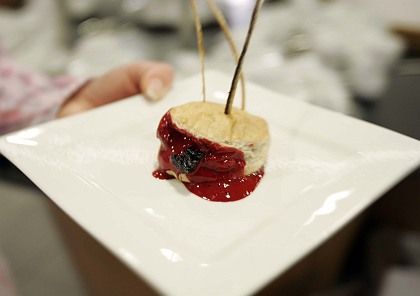 Michelin, the oldest and most respected European hotel and restaurant guide, is the continent's classic arbiter of gastronomic greatness. Since 1926, when the guide first introduced a rating system, its anonymous reviewers have had the power to propel or destroy Europe's priciest restaurants and best chefs simply by adding or removing a star in the famous three-tiered rating system.

Now, for the first time, the public is getting a chance to weigh in, thanks to state-of-the-art social networking and Web 2.0 features that take dining and trip-planning to a whole new level. "There are lots of amateur gourmets and seasoned travelers out there with opinions on good food and good restaurants," says Fabienne Latxague, Web site marketing manager for ViaMichelin, the digital arm of the Michelin Group, which also makes tires, of course. "We want to engage them and create communities."

The new tools, which went live in May, allow gourmands and travelers to share their opinions about restaurants, hotels, and vacation spots in eight European languages, to supplement the information in the traditional guide. The site also neatly pulls together useful information in one place, allowing, for instance, someone going to a business convention not just to book a hotel, but also to find out with a few clicks the weather forecast, which hotels are closest to the convention center, and how long it would take to bike, walk, or take a taxi from the closest train station to the various hotels.

Buy the Book, or Travel the Web

The new features are part of a major overhaul of Michelin's Web site and strategy. And because much of the new material will be free, the move represents something of a return to Michelin's roots. Its famous guide, first launched in 1900, was originally given to travelers for free to encourage tourism (thus also boosting demand for tires). The story has it that the Michelin brothers started charging for guides in 1920 after they found a pile of them being used to prop up a workbench in a garage and realized that customers didn't attach much value to the giveaway.

Fast-forward to 2008. In the digital age, people place a great value on information they can get at no cost on the Internet. And so while Michelin says its paper-guide business is still solid, ViaMichelin is hoping to increase substantially revenue from Internet advertising by giving the information in its distinctive red guidebooks away to a greater number of people.

To that end, in the fourth quarter, the company plans to add the capacity to download, at no cost, restaurant information and reviews from both the guide's experts and the public onto mobile phones so that consumers can choose the best places to dine via their keypads.

That doesn't mean Michelin Group expects people to stop carrying well-thumbed copies of its paper guidebooks, which are sold in bookstores around the world. Indeed in-country sales of the guides, which have expanded their coverage beyond Europe to include cities in the US and Japan, continue to grow 2 percent to 5 percent annually, says Jean-Luc Naret, the Paris-based director of Michelin Guides.

This despite the fact that Michelin has already been giving away some information since it launched its first major ViaMichelin Web site in 2001. The difference now is Michelin thinks it could earn even more money -- without eating into guidebook revenues -- if it did a better job of giving away information.

After all, though ViaMichelin has 3 million registered users and gets about 20 million visitors per month, it was losing ground to Google Maps and online travel site TripAdvisor. One reason, says marketing manager Latxague, is the site was too static and dominated by maps -- as opposed to interactive and containing community features. What's more, she adds, though users could reach restaurant ratings via the site, the information was difficult to find. A major redesign was in order.

The revamped ViaMichelin site includes satellite images of the earth provided by Microsoft. The maps are also more interactive than before, providing real-time traffic information and weather. The social networking aspect, which places reviews front and center, was created by Plum, a Silicon Valley startup that is itself still in beta testing.

Founded by seasoned technology entrepreneurs Hans Peter Brondmo, a Norwegian native, and US-born Margaret Olson, Plum specializes in technology that promotes a social way of sharing and saving information on the Net. The company, which raised seed money from Microsoft co-founder and billionaire Paul Allen, counts US retailer Sears Roebuck among its other clients. Sears is using Plum's technology to help its customers manage home renovations, while the Massachusetts Institute of Technology's Media Lab is using it to string together various media found on the Internet to tell stories.

In the case of ViaMichelin, Plum's technology lets visitors to the site contribute their own restaurant reviews and create their own digital trip planner and travel journal. They can drop in text, links, photos, or videos from anywhere on the Net and choose to share the information only with friends and family or open it to the public. Travel journals open to the public will show up any time someone looks up information for that destination on ViaMichelin's Web site.

The idea is that people will discover things off the beaten track and will be able to augment the information in the official guide. To create a travel journal or review a restaurant, people will have to register on the ViaMichelin site, but only a minimal amount of personal information is currently required.

There are plans to add more questions to better build communities of like-minded people on the site, says Latxague. For example, people who like trendy restaurants and boutique hotels are more likely to pay attention to the review of someone else who notes similar preferences. The goal of the new applications is "to get users engaged, [have them] become advocates, and have advocacy turned into addition," says Brondmo.

Michelin is betting the revamped Web site can help it make lots more money without hurting its other business. "People are always saying the Internet will kill paper, but in our case it is not true at all," says Naret, the head of the printed guides.

The parent company recently learned just how complementary its businesses can be. When it launched a new paper guide in Tokyo in November, the Japanese stood in line outside bookstores to get copies, Naret says. The first printing of the guide sold out in 24 hours, and all told Michelin sold 300,000 copies within five weeks. Since then its brand recognition has become so strong that the parent company has launched a new advertising campaign featuring the guide's famous red cover. The tag line: "Now that you've tried our restaurants, maybe you should try our tires."

Michelin's managers can only hope the new Web 2.0 ViaMichelin site creates the same kind of buzz in cyberspace.