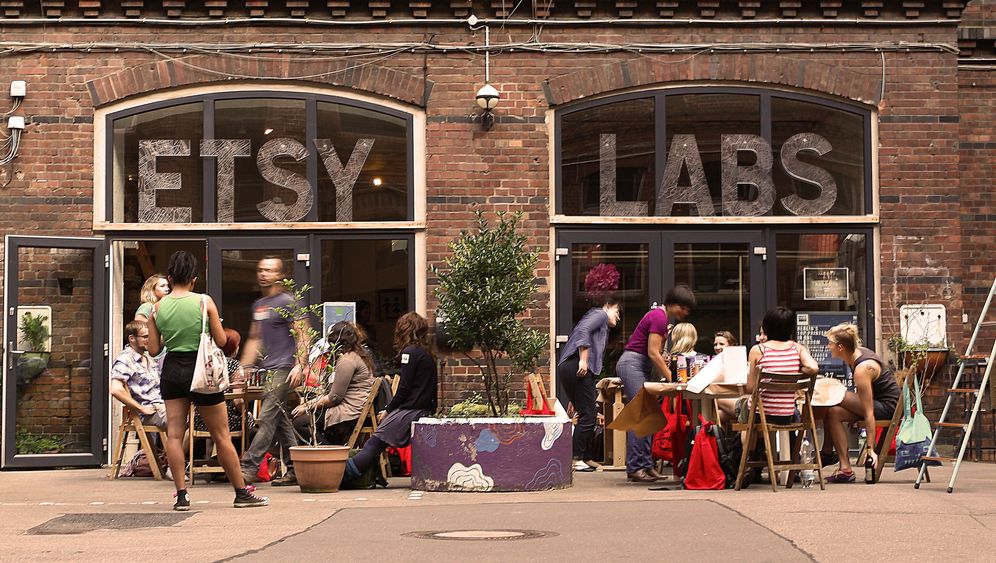 Matt Stinchcomb rarely gets time to do much more with his hands than tap his computer keyboard, even though he works for a website that lists more than 10 million hand-crafted or vintage items.

"I'm sitting in front of a screen all day and looking at all these creative products which I don't have time to make," says Stinchcomb, who is in charge of the European branch of the e-commerce website Etsy. "Sometimes I wish I could look back at the end of the day and see that I've made something tangible, something real."

Everybody's got a hobby. But is it possible to make money with it? Etsy, which recently launched a significant European base in Berlin, and homegrown start-up DaWanda are two successful online businesses in Germany that provide an emphatic answer to that question: yes. The Internet generation is rediscovering granny's knitting needles -- and the yearning to make, or own, authentic handicrafts has propelled virtual craft fairs from a niche pursuit into big business.

Rob Kalin, a painter, carpenter and photographer who wanted a suitable virtual outlet for his creations, founded Etsy in the United States in 2005. Since then, there has been a proliferation of similar online marketplaces for handmade items, sites where you can buy everything from a screen-printed t-shirt to a 1980s digital watch to an ornate dog collar. Unlike other platforms such as Ebay, however, these sites emphasize offline links between the makers and consumers, hosting DIY blogs and offline crafts workshops.

Successive years of climbing sales show they have tapped into a bigger trend. "I think this goes beyond the websites," says Stinchcomb. "This is part of a backlash," he says, explaining that consumers are increasingly turning away from mass-produced products.

The online retailing trend comes at a time when handicrafts are flourishing in Germany's urban centers. Berlin has a long tradition of small shops featuring handmade and vintage goods, partly due to its comparatively low rents. But in recent years, crafts have gained a new lease of life, with knitting clubs opening and stylish sewing shops sprouting up alongside hip cafes.

Germany could prove to be fertile ground for growth for both Etsy and DaWanda. In the country that brought the world the Waldorf method of schooling, which emphasizes an education of the head, heart and hands, a trend in de-accelerating busy digital lives and embracing handicrafts is gaining ground.

Evidence of this comes in the glossy pages of Landlust (the name loosely translates as "passion for the country"), a German magazine which comes out every two months. It contains articles on crafts, gardening and lifestyle reports, like how to build a cabin out of sticks with your children. The magazine, which glorifies a folksy rural lifestyle far removed from the digital age, has become the German publishing sensation of the year, with circulation soaring above the 1 million mark.

The backlash against mass-produced products has proven to be a goldmine for Etsy, which posted revenues of $500 million (€380 million) in 2011. In a bid to replicate its success in the US, the company opened the doors of a new European heaquarters in Berlin's fashionable Kreuzberg district last spring. The company says its European sales are already growing.

That pits the company directly against DaWanda, the market leader in the sector in Europe's German-speaking regions. In Berlin, where a debate has been raging for months about copycat Internet firms -- German companies that find initial success by cloning similar ideas that have taken root in the United States -- some have viewed DaWanda critically. But Etsy plays down such criticism, arguing there is plenty of room in the market for both companies to prosper.

In a sign of market confidence, DaWanda recently announced a major investment from American venture capital firm Insight Venture Partners, a financial backer of top Internet names including Twitter. DaWanda co-founder Claudia Helming confirmed that Insight paid a "double-digit million amount" for a 35 percent stake. She says the time is right for alternative retail ideas, adding that her website has been boosted by growing concern about the origins of mass-produced clothes and made-in-China trinkets. "People are more conscious consumers," she says. "The taste for handmade products goes hand-in-hand with people's interest in environmentally friendly or regional goods."

Etsy and DaWanda share the same business model: Artists, designers and artisans are charged a listing fee and the website also takes a small percentage of sales made on the platform. The approach has been a successful one: Both virtual craft fairs are turning a profit and seek to expand in Europe. DaWanda, which has been in the black since 2009, says it is entering a reinvestment phase and it will use its recent cash windfall to open an office in Paris. It is eyeing six other European countries as potential bases as well.

Etsy, which last year sold crafts in 150 countries, is also expanding internationally. "We are a global company. From the start we were trading outside of the US," Stinchcomb says. "Then we started to put some feet on the ground, working with local teams and local languages." Etsy now has offices in Paris and Berlin, and five people working from London and the Netherlands. Its European operations, however, are still financially supported by its US business.

The parallels between the two fast-expanding handmade marketplaces begs a question: Does Europe need two firms doing essentially the same thing? Pawel Chudzinski, the co-founder of Berlin-based Point Nine Capital, which has also invested in DaWanda, says there's plenty of space in the market for both virtual craft fairs. Looking ahead, he expects both Etsy and DaWanda to expand, squeezing out any smaller copycats. "With these platforms, the bigger they are, the better," he says. "Small sites do not have much appeal for buyers, nor sellers."

But for the two leading players, the taste for hand-stitched, crocheted or painted products is expected to remain strong. The growth of the unlikely sector presents a "big opportunity," Chudzinski says.

A Way to Unwind

One convinced fan of the online crafts bazaars is Lana Bragina of Hamburg. When she isn't busy with her day job as a graphic designer, she creates crocheted sculptures. It takes her at least a week to create just one of her works of art or pieces of jewelry, which she sells from her Ulani shop on Etsy. For Bragina, craft is a way of unwinding -- with a satisfying end result.

"Making something by hand makes the object unique -- it can't be endlessly copied, like a computer file," she says. "It is always exciting to upload a new design and wait to see how people respond."