In the land of stuffed animals, there is conflict twice a week. That's when the designers at famed German stuffed toy maker Steiff are required to present their latest creations to the director of quality control, a man named Mr. Krebs. He is completely immune to the heartbreakingly sweet faces of teddy bears, cuddly baby rabbits and cute longhaired guinea pigs. The furry toys' baby-like faces do not trigger any paternal feelings in Krebs.

Instead, his feelings toward the toys are driven by scientific curiosity. When Krebs sees a stuffed animal, his first thought is to burn it, drown it and wring its neck. He chars them, covers them with saliva and tears at their heads. He rubs acid into their fur, roasts them under UV light and tests the way they respond to all sorts of chemicals. 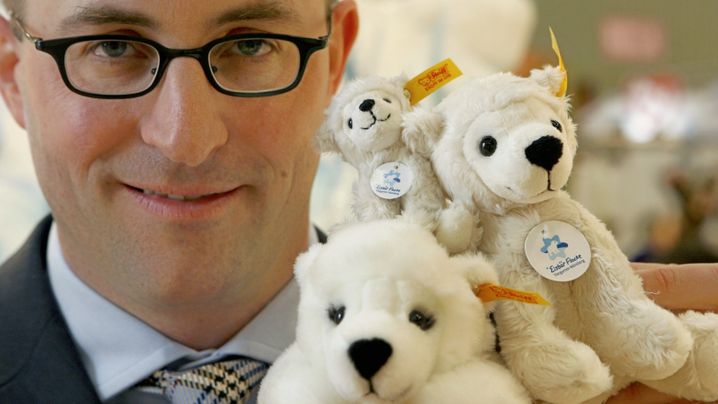 Only when a test bear has survived Krebs' onslaught is it permitted to become a Steiff animal. And when that happens, it gets the company's trademark button in its ear -- a medal for bravery, if you will -- at company headquarters in the town of Giengen in southwestern Germany.

Steiff CEO Martin Frechen loves these kinds of anecdotes. The 41-year-old head of Margarete Steiff GmbH is constantly talking about the quality of the world's most famous stuffed animals. He raves about the recently introduced "Steiff Purity Law" (the name is a play on Germany's famous Reinheitsgebot or "purity law" for beer). He is enthusiastic about seemingly mundane things like ISO certification and sings the praises of the organic cotton Steiff uses in its baby products.

"We want to make the most beautiful, best and safest teddy bears and stuffed animals in the world," he says, tugging at a piece of bear fur. "Look, there's no fluff. That's because we also weave the fur instead of just knitting it."

But why does he have to mention all this in the first place? Didn't practically every German grow up with a Steiff animal? Doesn't everyone know that, for some people, the stuffed animals remain a lifelong object of their affection? Even German Chancellor Angela Merkel has three Steiff animals, the celebrity gossip magazine Bunte reports: a rabbit, a duck and a lamb.

Given Steiff's reputation, why does Frechen needs to talk the company up so much? The answer is simple: A minor globalization adventure almost destroyed the reputation of this deeply traditional company.

The Misadventure of the Cosy Friends

In 2004, the company's then-management, in an effort to reduce costs, began producing in China. Of course, the Chinese-made products were not the company's flagship teddy bears and expensive collectors' items, but a cheaper collection called Cosy Friends. The purpose of the venture was to fight the low-cost producers that were filling department stores with cheap stuffed animals from Southeast Asia.

Even McDonald's was handing out free stuffed animals with millions of its Happy Meals at the time. A company like Steiff, producing in high-wage Europe, could hardly compete. But producing in China, where labor costs are significantly lower, enabled Steiff to sell teddy bears for just €14.95 ($21.50) -- a snip compared to the company's traditional bears, whose prices start at around €50 for a 12 centimeter (5 inch) bear.

Four years later, Frechen, who was named CEO in 2006, announced the end of the Chinese venture. He says he was skeptical from the start, but now he is convinced. "We don't want it any more," says Frechen. "China isn't part of our story. We want to place a Steiff product in a baby's crib and be able to assure the parents that nothing can happen."

It isn't as if the Chinese-made Steiff collection were filled with hazardous substances. But ever since the Mattel scandal involving contaminated toys, many parents no longer trust toys made in China.

Steiff's problems were of a different nature. The animals were often sloppily sewn together. In many bears, the eyes were not properly aligned. Perhaps Asians might have felt that the bears' new gaze was cute, but for European and American customers the animals' stare looked unappealing and even mean. The cross-eyed bears were rejected during quality control in Germany.

The production problems in China proved hard to fix. The globalized production of a sophisticated product entailed unexpected difficulties. For example, it takes an average of eight to 12 months for a seamstress to learn how to assemble the complicated Steiff patterns at the desired quality level. Hundreds of German Steiff employees traveled to China to train personnel.

But it turned out to be a costly program that ultimately wasn't worth the effort, because many Chinese factory workers do not return to their jobs after the Chinese New Year. Instead, they take jobs with other companies or simply stay home.

Chinese migrant workers have little loyalty to a particular firm. And why should they, when companies are just as disloyal to their workers? If another employer offers them better pay, workers are apt to move on.

The system drove up wages over time, leading to significant labor cost increases during the period of Steiff's involvement in China. What began as a low-wage venture became more and more expensive. Moreover, Steiff had trouble finding companies that were willing to meet German quality requirements. Finally, shipping costs rose as a result of rising oil prices, and the long distances that the products had to be shipped made it difficult for Steiff to react quickly to the market.

Berlin Zoo's celebrity polar bear Knut was a case in point. While Knut was turning from a cuddly baby into a larger, not-so-cute polar bear, thousands of stuffed animal versions of baby Knut were still en route to Europe. As a result, Steiff was unable to take full advantage of all the hype surrounding the celebrity animal.

Steiff had outsourced about 20 percent of its production to China, but in the summer of 2008 CEO Frechen decided he had had enough, and announced that the China venture would be over by the end of 2009. It hasn't quite worked out that way, with Steiff continuing to produce about 5 percent of the products in its toy range in the People's Republic. "Key chains and ... yes, a few bears," Frechen admits reluctantly. He insists that the company intends to be out of China completely by the end of 2010.

Others take a more critical view of Steiff's promises to be getting out of China. "The whole story also smacks a bit of PR," says Andreas Strobel of IG Metall Heidenheim, the branch of the German metalworkers' trade union that represents Steiff workers. He might be right, as jobs are not in fact returning to Giengen in Germany.

Steiff has long been manufacturing its products through companies it owns in Portugal and Tunisia. An additional 400 jobs have been created in Tunisia, to which much of the company's Chinese production is being shifted.

In the country's interior, where the factory is located, Steiff can depend on the loyalty of its workers, because there are no other jobs that pay a comparable wage within a wide radius. The shorter shipping distances also enable the company to react more quickly to the market once again. "If companies request special orders three months before Christmas, we are once more in the position to do that," says Frechen. Steiff has about 550 employees in Tunisia, 300 in Germany, about 100 in Portugal and 20 in the United States.

Steiff has also expanded beyond its roots as a teddy bear company. For some time now, the company has also been producing baby utensils and children's clothing, segments with a significantly stronger outlook for growth than the stuffed animal business. The German market for children's clothing is worth €2.2 billion in annual sales, compared with annual sales of only €100 million in the teddy bear segment.

Steiff's baby products are especially popular, including security blankets, toy watches, grip toys and romper suits. The company is reporting 60 percent growth in this market, and it hasn't shied away from ostentatious marketing stunts, including shooting the photography for its children's clothing catalogue in a Hamburg villa that used to belong to fashion designer Karl Lagerfeld (the company has also paid tribute to the designer with a limited edition €1,000 Karl Lagerfeld bear). Steiff sells its baby products in its own retail outlets and has opened one of its first concept stores on the upmarket North Sea resort island of Sylt.

Frechen explains that clothes attract customers into stores. "People can see that it is a solid product." He plans to continue expanding in this direction and dreams of selling high-quality kindergarten bags and children's underwear. "We want to market ourselves as a premium brand that is not arrogant," he says.

At the same time, he has also dropped many licensed products from the company's product line. His predecessors slapped the bear logo on too many products, including children's furniture, cosmetics and shoes, and risked diluting the brand. Instead, Frechen intends to focus entirely on Steiff's core competencies -- stuffed animals and products for small children -- and on maintaining control over production.

"Full integration" is his favorite expression at the moment. It sounds very German and not particularly globalized. It means maintaining control over every step in the production process and ensuring a high degree of autonomy for the entire product range.

But in one respect, Steiff has remained inconsistent. The company's clothes, a growth business, are produced under license -- and not in the company's native Swabia in southwestern Germany, but in Turkey. 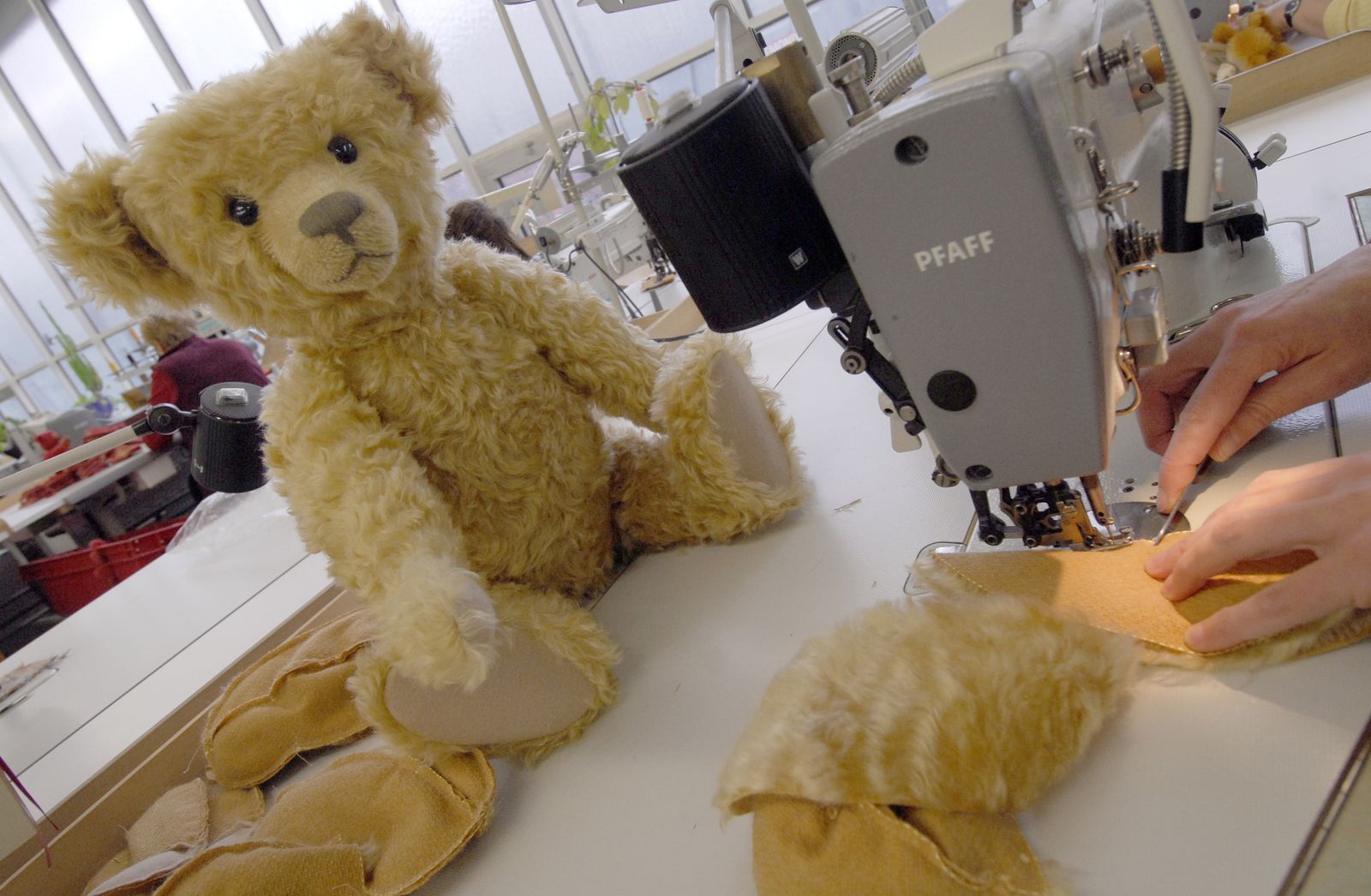 The Steiff plant in Giengen, Germany: Jobs aren't returning to Germany as a result of the pull-out from China, however.

The Steiff plant in Giengen, Germany: Jobs aren't returning to Germany as a result of the pull-out from China, however.