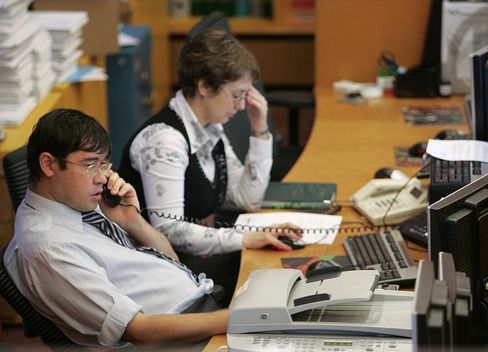 Is history repeating itself? That's surely a question many Russians must be asking themselves. Almost exactly 10 years after the financial crash of 1998, Russian markets are once again in turmoil. On Sept. 16, Moscow's largest stock exchange, MICEX, fell by a jaw-dropping 17.5 percent, the largest one-day loss in a decade, while the rival RTS exchange was down by 11.5 percent.

The free fall continued on Sept. 17, causing Russia's stock market regulator to suspend trading on both exchanges. The Russian central bank pumped a record $14.1 billion into the financial system, while the Finance Ministry said it would provide $44.9 billion in short-term loans to the country's biggest banks.

Compared with the gyrations in Moscow, the 5 percent declines in other global markets look pretty mild. What's more, the collapse in Russia is not simply a knee-jerk response to bad news elsewhere. Well before this week's chaos on Wall Street, the Russian stock market was imploding. Since the beginning of July, the RTS has lost 64 percent of its value, equivalent to some three-quarters of a trillion dollars.

The mounting losses have spurred frantic debate within the country's political and business elite.

Time to Face the Crisis

"The Russian economy is facing new and serious challenges. We require an active anti-crisis policy," Alexander Shokhin, the head of the country's main business group, the Russian Union of Industrialists & Entrepreneurs, told President Dmitry Medvedev at a meeting on Sept. 15.

Only a few months ago, Russian financiers and politicians were boasting that Russia was a financial safe haven, apparently immune from the global credit crunch. As recently as June, an International Monetary Fund mission to Russia concluded that "there are no significant negative spillovers from the global financial market turmoil."

Subsequently, both conflicts appear to have been resolved more or less amicably.

But the market hardly noticed, because on Aug. 8, Russia went to war with Georgia. Fearing a new Cold War, foreign portfolio investors took fright, selling the ruble and Russian bonds as well as stocks.

By the beginning of September, says Evgeny Nadorshin, chief economist at Trust Investment Bank in Moscow, the panic had spread from foreigners to locals. Fearing a further slide in the ruble, Russian investors also began piling out of ruble assets. "The times when the dollar was considered a much safer investment aren't that long ago, so many people just had a reflex reaction," he says.

As often happens in times of market panic, the collapse has been self-reinforcing. Having taken out loans to buy stocks, many investors suddenly found themselves forced to put up extra collateral as stock prices began to fall. The only way to raise cash in a hurry was to sell more stocks, creating an unstoppable vicious circle. "Once things start, you get automatic mechanisms that kick in. People don't know where it's going to stop," says Richard Hainsworth, general director of the Rus-Rating credit-rating agency in Moscow.

For Russia, the biggest fear now is that the chaos on Wall Street will deepen the global economic slowdown, pushing oil prices still lower. They've already fallen 35 percent, to the current $95 a barrel, after peaking at $147 in July.

Some seasoned investors and market analysts predict the Russian market will recover quickly. "The world has gone mad," says Eric Kraus, manager of the Nikitsky Russia Fund, who calls the market implosion "a negative bubblecompletely disconnected from economic fundamentals." With price-to-earnings ratios around 5 or 6, Russian stocks are now priced at a fraction of international counterparts', he says.

Nor do Russia's macroeconomic numbers give any obvious reason for panic. Gross domestic product growth in the second quarter reached 7.5 percent, only marginally down from the first quarter. Russia also recorded a $260 billion trade surplus in the first half of the year, helped by record $65 billion exports from its largest company, Gazprom.

"When people recognize the companies are still making money, there'll be a massive increase as people buy in," predicts Hainsworth. As the war in Georgia fades from the news, diplomatic tensions between Russia and the West appear to be abating, and the threat of economic sanctions is receding. Most analysts believe the oil price will soon climb back toward $100 a barrel.

Some relief may also come from the Russian government. For months, business leaders have been pressing for tax cuts to boost corporate profitability.

An End to Squabbling?

That would be a boon to the hard-pressed oil sector, which has recently curtailed production because of a crippling tax burden. The government, although sympathetic, has been squabbling for months over the extent of any tax cuts. The stock market crash looks set to break the logjam.

But that won't solve the underlying problems in Russia's financial system. Long-term savings in Russia are close to nonexistent. Most Russians still rely on the state to provide their pensions, and few have anything more than rudimentary insurance. Without stable institutional providers of long-term capital, Russian markets have to rely on volatile foreign capital.

With Wall Street in chaos, investors' appetite for riskier emerging markets such as Russia seems bound to diminish. Putin recently predicted that foreign capital inflows would fall to $50 billion this year, down from $81 billion in 2007. "If foreign investors don't buy debt and equity, Russian companies will find it harder to raise capital and therefore harder to grow," says Kingsmill Bond, chief strategist at Russian investment bank Troika Dialog. "That is the Achilles' heel of this market."

That could ultimately spell serious problems not just for the Russian stock market but for the entire Russian economy.