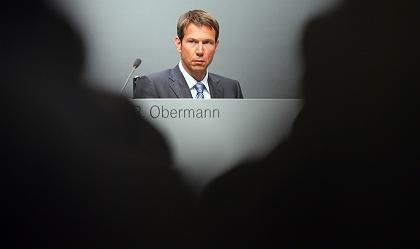 Deutsche Telekom CEO Rene Obermann has pledged a full proble into the scandal, which happened before he took over as head of the company.

German phone company Deutsche Telekom has tried to reassure its customers and pledged a full investigation into the snooping scandal that has drawn comparisons with the methods of the East German Stasi secret police.

It's the latest in a series of scandals in Germany over companies spying on their employees. One of the biggest involved supermarket chain Lidl, which reportedly violated labor laws by installing hidden cameras in its stores to systematically keep tabs on staff.

The difference in this case is that the federal government is the main shareholder in Deutsche Telekom, Europe's biggest phone company.

The opposition liberal Free Democrats said they would be asking the government to respond to the scandal in parliament. "We will ask the government what consequences it will draw from this," FDP member of parliament Hans-Joachim Otto told SPIEGEL ONLINE.

The chairman of the Federation of German Police Officers, Klaus Jansen, said the government should respond by forcing phone firms to place all their connection records in a common database supervised by privacy protection experts.

The companies could access the database for billing purposes while the government could access it in a strictly controlled way in criminal investigations, Jansen told the Neue Osnabrücker Zeitung newspaper. "The Telekom affair is a huge opportunity for data protection and we should seize on it," said Jansen.

Deutsche Telekom confirmed allegations in SPIEGEL that it hired an outside consultancy to track hundreds of thousands of phone calls by senior executives and journalists in 2005-2006.

It denied that the Berlin firm listened to the conversations, claiming instead that it merely logged details on who phoned whom as well as the time and duration of the calls.

SPIEGEL said that "Operation Clipper" and "Operation Rheingold" were set up in order to identify the source of leaks of sensitive financial information to financial journalists.

"I am completely shocked by the allegations," Chief Executive Rene Obermann said on Monday. "We have involved the state prosecutors and will support them in their efforts to conduct a thorough investigation."

The monitoring of phone calls took place when Telekom was being managed by former Chief Executive Kai Uwe Ricke and supervised by supervisory board chairman Klaus Zumwinkel. The latter recently quit after he became embroiled in a tax-dodging affair.

SPIEGEL reported both men as saying that they knew nothing of the monitoring of phone calls. A spokesman for Zumwinkel told the magazine that any such analysis of phone records, if true, was not made with his approval.

The scandal is a major test for current CEO Obermann, who is under severe pressure to clear it up as soon as possible. He tried to reassure Telekom customers on Monday, telling Bild newspaper: "The data of our millions of mobile and fixed line customers are safe."

Germany's Federal Commissioner for Data Protection, Peter Schaar, said Telekom would have to notify everyone affected by the spying operation. "The case must be fully investigated and consequences need to be drawn," he told reporters in Bonn.

Evidently some people had not been able to resist the temptations resulting from their control over an ever-increasing stock of personal information, he added.