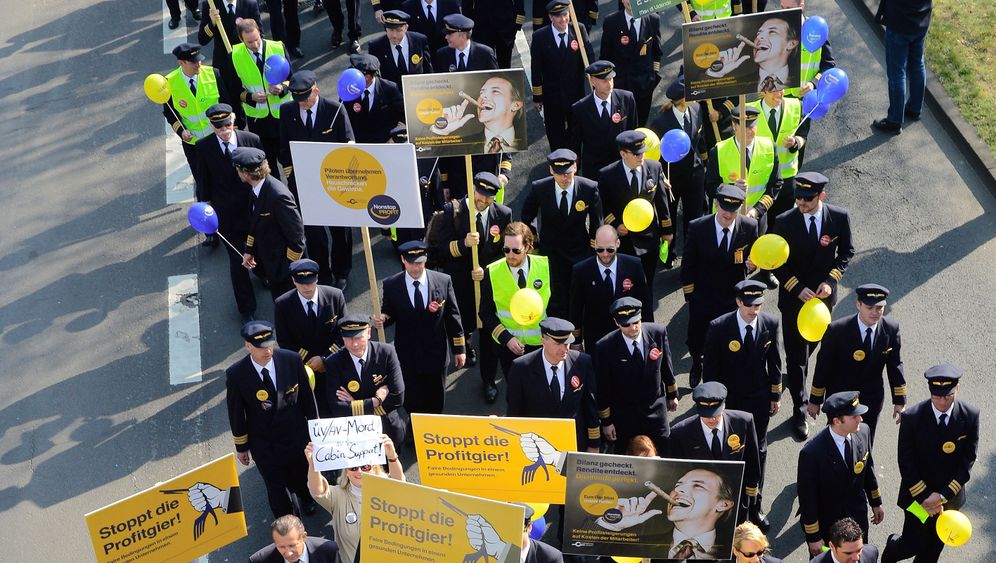 Photo Gallery: Threats from All Sides at German Airline

Munich's Franz Josef Strauss Airport is one of the world's top airports, and ironically, this is most evident on a day when it feels abandoned. On Wednesday of last week, a contemplative silence prevailed in Terminal 2, which is reserved for Lufthansa, its subsidiaries and its partner airlines.

Because the enormous terminal was uncharacteristically empty in the morning, the handful of people in the building had an unobstructed view of the open space and the glass roof, with its awnings and elegant steel ribs. And above it all: a perfect, pale blue sky.

The men and women responsible for the unusual stillness were sitting only a few hundred meters away, in a room adjacent to the airport brewpub: Lufthansa's pilots, who, by staging the first three-day, nonstop strike the company had ever experienced, ensured that about 3,800 flights were cancelled and more than 400,000 passengers were unable to complete their travel plans. It was an impressive show of strength by a small but confident professional group, represented by the tiny German pilots' union, Vereinigung Cockpit (VC).

VC's slogan for the strike, "Stop the profit greed," was illustrated with signs depicting a crane (the Lufthansa symbol) in the clutches of unscrupulous financial investors. But the motto ended up backfiring on the pilots' union. In the public and the press, on television and in many Internet forums, discussions of the pilots' strike, instead of triggering debates over greedy fund managers, were focused on the pilots themselves. People across Germany were talking about whether the strike was justified or excessive. The Lufthansa pilots came under fire, given that their annual salaries can range up to €260,000 ($360,000). The tabloid newspaper Bild characterized the pilots as "luxury strikers" and noted that the highest-paid pilots, "with salaries of up to €21,000 a month, earn 10 times as much as bus drivers" -- the implication being that this is clearly too much.

The early retirement program for cockpit employees in the Lufthansa Passage division triggered similar outrage. The rule, which only entered into the public awareness as a result of the strike, allows pilots to retire at 55 with 60 percent of their last salary.

Company management and the new head of human resources, Bettina Volkens, want to raise the minimum retirement age and lower the amount paid to pilots if they choose to go into early retirement. The goal of the pilots' walkout is to prevent both things from happening.

Lufthansa Is Losing Its Luster

But the fuss over the two issues deflects attention from the fact that the conflict between management and pilots is about much more than what early retirement will look like in the future. In fact, management and the pilots are at odds over nothing less than control over the future course of Europe's largest airline. The two sides are grappling over the issue of what the airline's modernization program should look like, how well prepared it is for the future and, finally, how it can survive in a world in which low-cost carriers and aggressive Arab airlines are increasingly stripping the once proud Lufthansa of its importance.

Lufthansa management has been trying for years to cut costs in all employee groups, in order to compete with budget carriers like Easyjet and Ryanair, as well as large Arab airlines like Emirates and Etihad. There is more at issue than the company itself. In fact, Lufthansa is also acting in the interest of the German economy, because an exporting nation like Germany cannot prevail in the long term without worldwide passenger and cargo connections several times a day to and from Germany and beyond.

The pilots and their union, on the other hand, have a completely different take on the situation. They believe the company still makes enough money to keep up with the competition and preserve popular benefits like early retirement and other perks. In fact, the pilots suspect that British and American investment funds are exerting substantial pressure on Lufthansa management to increase dividends and returns -- a claim they have yet to substantiate with hard facts.

To reinforce their respective positions, the two sides have bombarded each other for months with numbers and facts, along with position papers. Most are too esoteric for outsiders, and some are filled with assumptions, half-truths and thinly veiled threats.

Nevertheless, there are some facts that even the pilots and their representatives cannot ignore, ones that tend to favor Lufthansa management's position. The numbers indicate that the company isn't doing nearly as well as is generally assumed.

An Airline Essential to the German Export Economy

In the last three years, strong competition from Emirates and other airlines has forced the German carrier to abandon routes from Frankfurt to Jakarta and Hyderabad, and from Munich to Singapore. "On balance, significantly more destinations have been cancelled than added to the flight schedule since 2011," management writes in a position paper published in mid-February. Besides, the paper continues, Lufthansa is "currently unable to operate profitably on many (of its) routes."

The document also notes that as recently as 2011, the plan was to operate 480 aircraft in the Lufthansa Passage division, that is, without subsidiaries like Swiss and Austrian Airlines, until 2016. That number has since been reduced to 400 jets. When the carrier does acquire new aircraft, it is only to replace older and smaller planes. This reduces costs per passenger, but hardly creates any additional jobs.

These developments ought to give the pilots and their representatives food for thought, and yet they remain relatively unwilling to compromise -- which is partly attributable to the pilots' self-image. Humility is apparently not part of the genetic code of pilots. On the contrary, many Lufthansa pilots and VC officials still cling to outdated notions of status, from an era when Lufthansa was still a state-owned carrier, and the men and women with gold stripes on their uniforms were essentially treated as honorary German ambassadors to the world.

Because there was only one prestigious employer for them in Germany in the 1980s and 90s, Lufthansa, their careers were structured like those of civil servants, with professional advancement and compensation tables established in advance, and generous retirement benefits.

For this reason, most Lufthansa cockpit personnel still see themselves as part of an elite group, a feeling that is not entirely unjustified. Lufthansa's standards for physical and emotional resilience are so strict that it generally accepts no more than five of every 100 candidates for jobs with the airline. Successful candidates must also exhibit three-dimensional reasoning skills, the ability to cope with stress and risk-averse behavior. However, these character traits now present a challenge for Lufthansa, as the pilots prove to be especially tough opponents in pay negotiations. The dispute over early retirement is only one of many contentious issues.

The months of skirmishes over the true situation at Lufthansa and its prospects for the future have only concealed a number of other bones of contention. Some, such as how the airline treats sick days and vacation, or the ongoing quarrel over compensation, are relatively harmless and will likely be resolved quickly. Others, such as the use of aircraft made by Brazilian manufacturer Embraer in Lufthansa's Cityline subsidiary, are immensely dangerous and could soon trigger the next major conflict.

Cityline currently operates 33 of the aircraft, with 100 to 120 seats, but not always with the same personnel. About a dozen of the jets are flown by Lufthansa captains and co-pilots, who are paid just as well as their counterparts with the parent company. Regular Cityline pilots fly the remaining aircraft -- for significantly lower pay.

Based on an arbitration agreement reached in 2010, the VC officials are demanding that these jets be transferred to the Lufthansa Passage division by the end of 2015, and that they be flown exclusively by Lufthansa pilots. However, this could result in the elimination of several hundred cockpit jobs at Cityline. In a worst-case scenario, Lufthansa management could even be forced to shut down the budget subsidiary.

All of this increases the pressure on management to resolve the current dispute over early retirement benefits, but without caving in, which would only weaken its position in future disputes. No new strikes are expected before Easter and the two following weeks, because the pilots and their union have promised to largely spare the Easter vacation period.

However, unless a compromise is reached, the pilots could go back on strike starting May 5, a potentially symbolic date for the company, because it will mark the end of the new, 47-year-old Lufthansa CEO Carsten Spohr's first full week of work. Spohr does have one advantage: He holds a pilot's license for the Airbus A320.