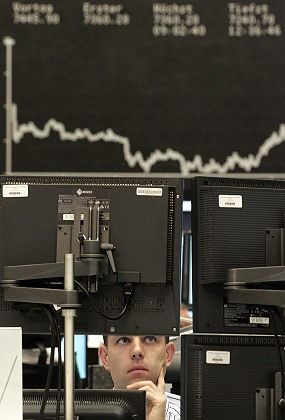 Despite posting net profits for the first quarter of the year, Europe's big banks are still making large writedowns.

Just when shareholders hoped the worst was over, European banks revealed further writedowns this week linked to soured US assets. From Britain's HSBC to France's Crédit Agricole, these new multibillion-dollar losses highlight the continuing exposure of Europe's major financial institutions to credit market volatility. Investors can't help but wonder how much longer the bleeding will continue.

At first glance, the spate of recent earnings releases did little to soothe fears. HSBC announced a $3.2 billion writedown on May 12 and cautioned the US economy would remain in recession. The next day, Crédit Agricole took a $1.85 billion writedown, primarily tied to its investment banking division. And on May 14, Barclays took a $1.9 billion hit related to its investments in US securitized assets.

At the same time, these and other writedowns were less than many banking analysts had expected, suggesting that the worst of the crisis may have passed. Indeed, the big European banks all posted net profits for the first quarter and expect to remain in the black for the rest of the year, though balance sheet adjustments may continue into the second quarter and beyond.

What does it all mean? Experts say banks are erring on the side of caution in light of uncertain economic prospects, the difficulty of valuing securitized assets, and calls from central banks to boost their capital reserve ratios. One consequence is a continued reluctance by banks to lend money -- hampering economic growth on both sides of the Atlantic.

At the same time, some analysts are starting to wonder whether banks are writing down too much -- jettisoning unwanted investments under the guise of cleaning up their balance sheets. "Once the writedown decision has been made, the pendulum swings to the other extreme, and banks start to throw in the kitchen sink," Dresdner Kleinwort analysts wrote in a recent note to clients. Even the Bank of England has suggested as much, noting in an April report that prices in some credit markets may now "overstate the losses that will ultimately be felt by the financial system."

No doubt the push to ditch undesirable assets is tied to banks' growing risk aversion. Unlike in the heady days of cheap capital and easy lending, financial institutions are taking a conservative approach to valuations in order to protect their capital reserves. That means some creditworthy assets such as commercial mortgage-backed securities are being lumped in with riskier investments like securitized subprime loans, in big writedowns.

According to Ralph Silva, a banking analyst at financial services consultancy Tower Group in London, institutions are writing down these investment-grade assets to show shareholders how serious they are about protecting reserve ratios no matter what happens in the financial markets. "No one wants to be the next Northern Rock," he says, referring to the British mortgage lender that suddenly collapsed last summer when credit dried up. "They don't want to put all their marbles in one place and find out they've made a mistake."

Banks are also going to the markets in search of additional capital. Britain's Royal Bank of Scotland is raising $24 billion through a rights offering to shore up its balance sheet, and on May 13, Crédit Agricole said it would use a similar tactic to raise $9.1 billion. Banks are choosing rights offerings, which dilute shareholder equity, because raising debt has gotten more expensive. But some observers think they may be going too far. "Banks are obviously trying to attain more money than they need," Tower Group's Silva says.

Most Want Safety, Not Profit Growth

According to analysis from Morgan Stanley, the money raised from these rights issues may be used for more than just strengthening capital reserves. Flush with new cash, some banks could turn their eyes to acquiring distressed financial assets on the cheap. That might include buying rival banks that have suffered more from the credit crunch, before a recovery in equity markets pulls prices up again.

Only the strongest European banks are likely to take such risks now, though. For the rest, the paramount goal is safety, not profit growth, says Pete Hahn, a fellow at City University's Cass Business School in London and a former managing director at Citigroup. "There's pressure to show you're safer than your counterparts," says Hahn, who believes a conservative mentality may last for the next two to three years.

That means investors may see continued asset writedowns into the second half of 2008. But behind the headlines, the multibillion-dollar hits will reveal more about risk aversion than they do about the underlying financial soundness of Europe's major banks.