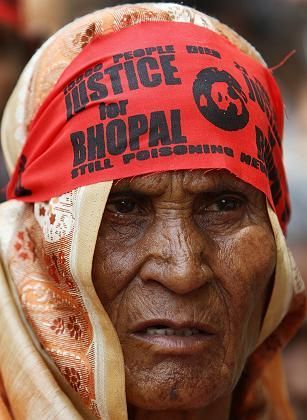 A Bhopal survivor at a May 13 protest in New Delhi.

For nearly a quarter century, the name Bhopal has been synonymous with the dangers of industrialization. In the wee hours of Dec. 3, 1984, a toxic gas leaked from a pesticide plant in the central Indian city of Bhopal. Since then, some 20,000 people have died from the contamination, including thousands on the day of the disaster.

Today, Bhopal is also coming to mean endless litigation. Although a civil case on compensation for victims was settled 19 years ago, Indian courts have yet to rule on several other issues involving Bhopal. And the continued legal wrangling now threatens to trip up a company that had nothing to do with Bhopal in the first place: Dow Chemical.

What's Dow's connection to Bhopal? Seven years ago, Dow bought what was left of Union Carbide, the company that owned the Bhopal plant. Even though Union Carbide had sold off the unit that ran the Bhopal facility a decade before Dow bought in, many Indians believe Dow should now take responsibility for the accident. Even if Dow never has to pay any damages, Bhopal has become a thorny public-relations issue for the company. It faces increased scrutiny of its activities, and some people -- both in India and abroad -- believe Dow may ultimately have to help clean up the site, where toxins have leaked into groundwater that's used by some 25,000 people.

The latest headache for Dow is a May 14 letter by shareholders to the US Securities & Exchange Commission. Signed by nine investors, the letter says the company hasn't disclosed potential liabilities related to Bhopal. "Up to $1 billion in Dow Chemical investment in India may be impeded," the shareholders write. They're worried about a $22 million deposit that India's Ministry of Chemicals & Fertilizers wants from Dow to cover the cleanup pending a final determination of costs, which could be many times that amount. This follows a December, 2007, resolution by heavyweight shareholders, such as TIAA-CREF and the New York City Pension Funds, asking the company to address issues concerning Bhopal.

In 1989, Union Carbide agreed to pay $470 million to victims -- $1,500 per death and $550 per contaminated individual. But a criminal case against Union Carbide is far from resolved. The company was charged with "culpable homicide not amounting to murder." No one from Union Carbide headquarters appeared in court, though, and a magistrate declared the company and its chief executive "absconders" from the law. Victims' groups and some lawyers argue Dow could therefore be drawn into the criminal case for allegedly giving shelter to Union Carbide -- now considered a fugitive -- a notion Dow calls "ridiculous." Environmental litigation might also be a liability, since toxic chemicals at the plant weren't properly disposed of.

While Dow has expressed sympathy for the victims of Bhopal, the company says it has no responsibility to clean up the Union Carbide facility. Dow "never owned or operated the Bhopal plant site and Dow did not inherit any liabilities of Union Carbide Corp.," says spokesman Scott Wheeler. The company hasn't paid the $22 million deposit, which it calls "inappropriate," and says the shareholder letter is without merit. Any cleanup, Dow maintains, is the business of the state of Madhya Pradesh, where Bhopal is located. In 1997 the site was handed over to the state, and a court suggested that the state and federal governments start cleaning up the Bhopal facility.

But all this has rattled Dow enough to spur the company on to intense lobbying. Dow CEO Andrew N. Liveris has been in touch with top Indian executives and government ministers. One business leader, Tata Group Chairman Ratan N. Tata, suggested to Prime Minister Manmohan Singh that Indian corporations create a fund to clean up Bhopal. The Prime Minister and many companies agreed to Tata's proposal, but the Chemicals Ministry would have none of it. In February it sent Singh an opinion from the Ministry of Law that contained a bombshell for Dow: "If there is any legal liability, it would have to be borne by Dow Chemical," and some of the company's investments in India could be at risk.

Dow's Indian troubles extend beyond issues directly related to Bhopal. In Chakhan, some 120 miles from Mumbai, Dow is building a $100 million R&D center. But since January, residents of nearby villages have staged a sit-in, blocking access to the site. The villagers of Chakhan are worried that what befell Bhopal awaits them, despite full-page reassurances, paid for by Dow, published in local papers. Dow's reputation in India took another hit last year after the company revealed that some employees had bribed Indian officials, resulting in a $325,000 fine from the SEC.

Meanwhile, activists are stepping up the pressure. About 50 victims of the disaster walked to Delhi from Bhopal this spring and have set up camp near Parliament, demanding that toxic waste be removed, clean water be provided to area residents, and legal action be taken against Dow. "Our victory will be against Dow," says Satinath Sarangi, founder of the Sambhavna Trust Clinic, which provides free health care to Bhopal victims. "And we will win."