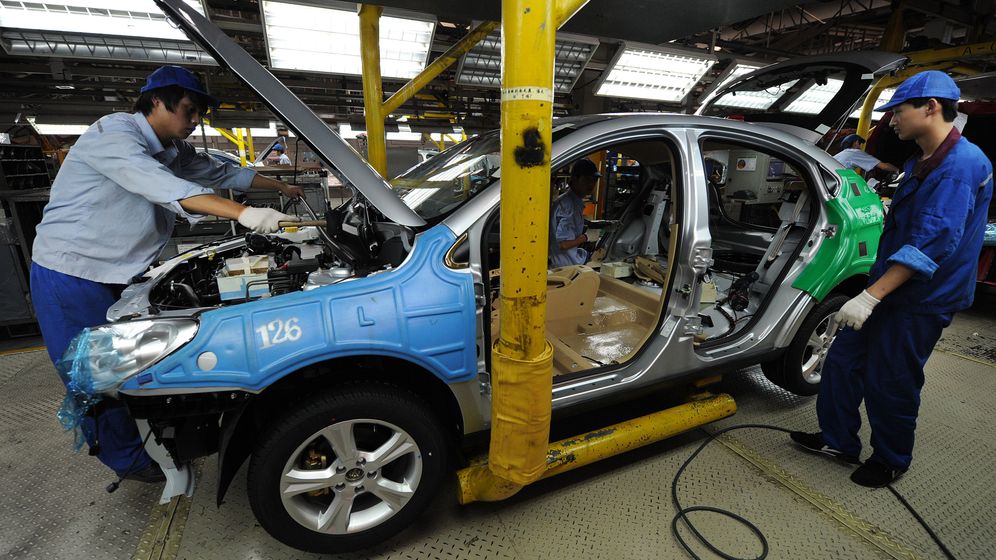 The sea change is coming slowly, as if to protect those affected from being startled out of their festive mood. At the end of last year, the Chinese government's National Development and Reform Commission (NDRC) approved a new industrial plan that could have a devastating effect on German car manufacturers like Volkswagen, BMW and Mercedes once it takes effect in late January.

These companies have worked to make China one of their most important and successful foreign markets, while Beijing industrial planning officials looked on in frustration. In the first 11 months of last year, VW alone sold more than 2 million vehicles in there -- up more than 15 percent from 2010.

But this kind of growth could now be over. To protect the "healthy development" of their domestic auto industry, the NDRC said it would remove car manufacturing from the list of industries where it encourages foreign investment. The goal of the change is clear: Beijing wants to help its own carmakers break into the market.

When compared to foreign manufacturers, domestic Chinese carmakers such as BYD ("Build Your Dreams") are suffering from the current slow-down in the market there. After Beijing cut state benefits for car purchases, the entire Chinese auto market grew by only about 3 percent in 2011 -- compared to 30 percent the previous year.

It was not exactly what the communist government had in mind for its car industry when it was opened up to foreign manufacturers in the 1980s. They stipulated that foreign automakers could only produce vehicles in China if they established equal joint ventures with Chinese partners -- and this still hasn't changed. Beijing hoped to harness the foreigners to act as mentors to their own companies. At the same time, they also hoped to nurture some of China's more than 100 carmakers into becoming internationally competitive companies.

The plan, though, didn't quite work. Instead of learning modern technologies and creating their own attractive brands, Chinese government enterprises often took the opportunity to comfortably earn money through the joint ventures. Chinese car brands managed to capture just 30 percent of the domestic auto market.

Companies like Shanghai Automotive Industries (SAIC) decayed into cumbersome holding companies, even though the state-run colossus maintained joint ventures with VW and General Motors (GM). They left most business operations up to the foreigners. Only after political pressure from Beijing in the last few years have Chinese auto companies redoubled their efforts at producing their own brands.

But they were too late. In the meantime international companies like VW had already started squeezing Chinese manufacturers with their own discount brands like Skoda. VW also plans to strengthen its more affordable offerings with models from their Spanish subsidiary SEAT.

Beijing's next tactic was pressuring foreign carmakers to build domestic brands with Chinese partners. Thus joint ventures with GM and Nissan produced the Baojun and Venucia, respectively. And VW promised to offer an electric vehicle called Kaili beginning in 2013, a pledge that reportedly resulted in approval to build a new factory in Foshan, in the country's southern Guangdong province.

Chinese consumers, though, haven't been excited by these "domestic brands," still preferring foreign originals. Plus, in the interest of security, foreign companies develop their main technologies at their headquarters back home.

This means that China's auto industry planners have widely missed their ambitious goals. If Beijing had its way, the domestic auto industry would be as successful as their high-speed train production.

Through clever negotiating tactics the Ministry of Railways skilfully played German, French, Canadian and Japanese manufacturers against one another, getting them to relinquish their core technologies. The result: In other international markets China's trains have long become serious competition to their former mentors.

Now, everything is set to change with the new rules for foreign investment. The plan could indeed accelerate the transfer of technology in the auto industry.

The activities of foreign carmakers will still be allowed in China, and for certain components like motors, automotive electronics and transmissions, Beijing will still allow foreign investment. Companies such as VW are already well established on the Chinese market anyhow, making the withdrawal of state support unlikely to damage their business.

When it comes to building new factories and branching out into the enormous market's hinterlands, however, the new rules may prove to be restrictive, because local officials will be tasked with interpreting them. A number of provinces have their own local carmakers, and they have little interest in allowing foreign competitors into their regions.

The situation could become particularly difficult for brands such as BMW, Ford or Mazda, which have so far only worked with one partner and depend on their further cooperation. Things might be even more difficult for Japanese car company Subaru as it attempts to advance into the Chinese market. The government is likely to demand concessions in know-how in exchange.

Despite the new rules, China's industrial planners are under no illusion that they will quickly catch up to foreign manufacturers technologically. Instead they are focusing their ambitions on electric cars, the sector of the future, by forcing cooperation with foreign producers.

Similar to the solar industry, where thanks to state support China has risen to be the world market leader, the country hopes to overtake the electric car competition in the long run. To this purpose, the NDRC's new plan includes another important requirement: Those who want to produce car batteries in China won't be allowed to do so alone, but only in an equal joint venture with a Chinese partner. 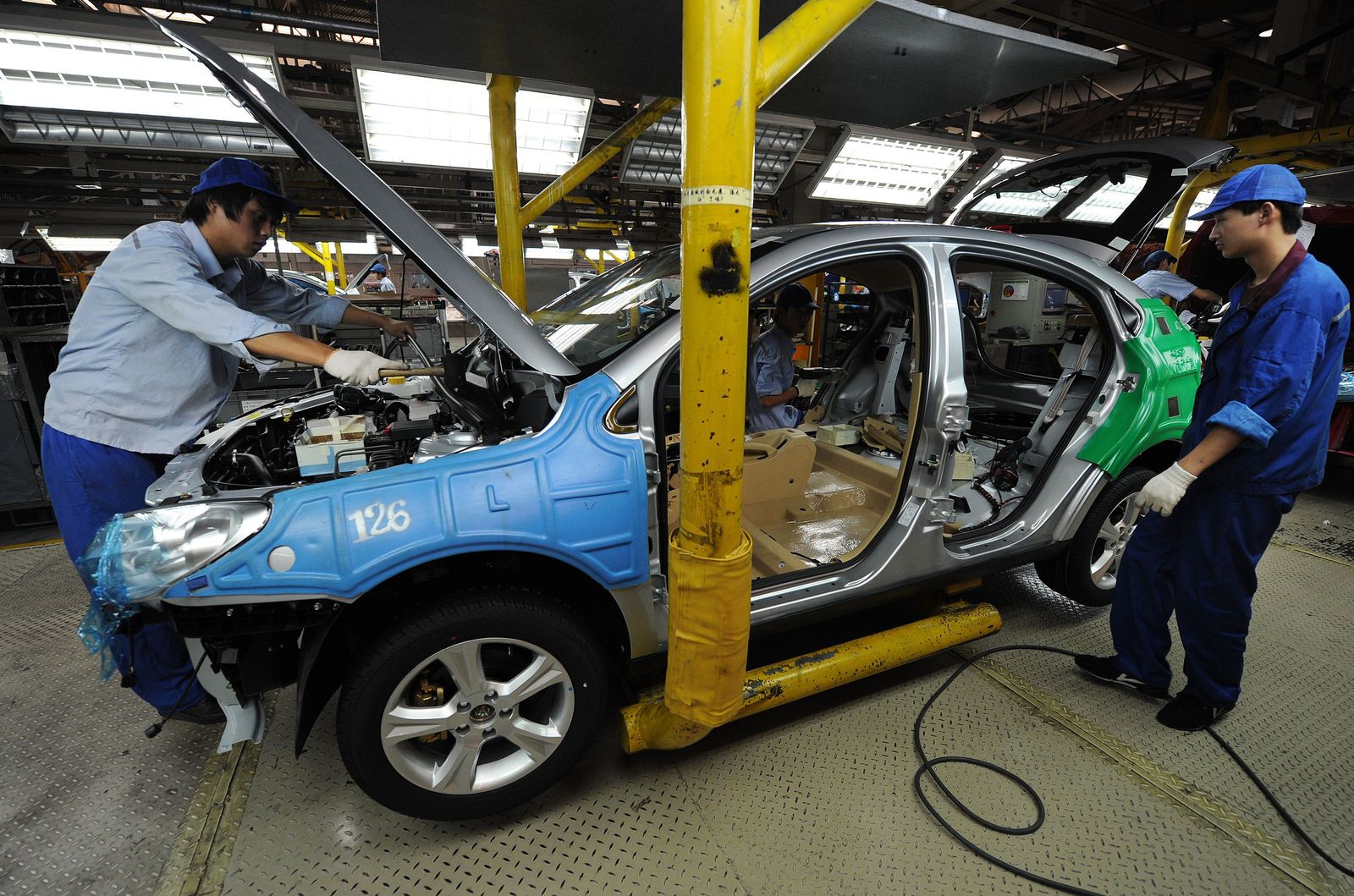 Foreign carmakers have long had a largely free hand in China, with domestic models lagging far behind. Here, workers in a factory belonging to the Chinese car company Chery. Now, though, changes in regulations may make it more difficult for foreign companies to grow in China.