In fairytales, a fairy occasionally appears when the going gets really rough. The hero makes three wishes, extricates himself from various predicaments, and can look forward to eternal happiness.

In the harrowing tale currently embroiling Porsche, the good fairy is played by a sheik. Porsche managers say the company is conducting promising negotiations with the emirate of Qatar.

An investor could buy a stake in Porsche or help the carmaker, which is strapped for cash, by acquiring its troublesome Volkswagen stock options. In any case, he would give Porsche a cash injection worth billions and rid the company of all its problems.

But, for the time being, that is just a fairytale. No sovereign wealth fund that intends to safely invest its money is likely to be interested in buying a stake in Porsche or VW. Both companies appear to be in a totally chaotic state.

Merger negotiations have been broken off, then resumed. The shareholder families Porsche and Piëch are at each other's throats. Uwe Hück, a member of the Porsche works council that represents employees' interests inside the company, has called on the workforce to demonstrate against co-owner Ferdinand Piëch. And Piëch wants to sack Porsche CEO Wendelin Wiedeking.

But all backroom squabbling aside, the real problem is that Porsche needs fresh capital, or the automaker could become a total loss. "There still remains a risk of insolvency," says a VW manager. Porsche CEO Wiedeking told the supervisory board of Porsche Automobil Holding SE: The "critical situation" will continue even after an extension is granted on the €10 billion ($14 billion) in loans. And co-owner Piëch says: "None of the shareholders wants to see an insolvency." 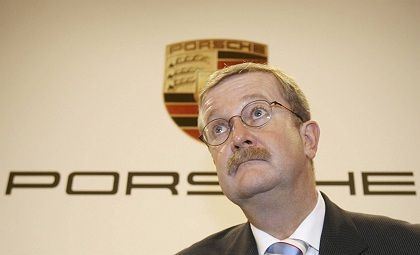 Porsche CEO Wendelin Wiedeking: The brakes have been applied to a man widely considered to be a turbo capitalist.

The fact that Piëch even uses the word "insolvency" is an indication of the seriousness of the situation. But in its official statements, the company vehemently denies any such insinuations. "We certainly haven't lost our shirts," says a company spokesman. He added that Porsche is making interest payments from its ongoing business activities, and the workforce has received its union-negotiated pay increase on time, in contrast to other carmakers. Porsche will only have to seek new financing to the tune of €3.3 billion in March of next year, he said.

But that's only part of the truth. Actually, on top of this €3.3 billion, the Stuttgart-based company will very soon need additional loans of over €2.5 billion. So far they have only been able to secure €750 million of that amount.

Out of desperation, Porsche managers have even looked into the possibility of securing loans from Germany's state-owned development bank, KfW. Their application has been turned down, at least for the time being. Now the governor of Baden-Württemberg where Porsche is based, Günther Oettinger, has raised the possibility of his state granting loan guarantees.

Porsche CEO Wiedeking, a turbo capitalist who used to look down his nose at subsidies ("luxury and government handouts don't match"), Porsche CEO Wiedeking has long looked down his nose at government subsidies. Now, though, it seems unlikely that he would turn down such handouts. There are apparently no private banks in sight that are willing to grant Porsche a line of credit without government loan guarantees. And that's not all.

During the three days from March 22 to 24, according to the statements of a number of those present, Porsche had to ward off an impending bankruptcy. Even German Chancellor Angela Merkel intervened on the company's behalf.

A Porsche spokesman says that bankruptcy was never an issue. But the events were dramatic.

It began on Sunday, March 22, at 5:00 p.m. with a crisis meeting in the state chancellery in Hanover. Porsche CEO Wiedeking and his chief financial officer Holger Härter told Lower Saxony's governor Christian Wulff how serious the situation was at Porsche.

The banks were hesitant to provide an extension on a €10 billion loan that was due to be paid back on March 24. The Porsche executives didn't say that they were on the verge of bankruptcy. But that is how a number of those present interpreted the situation.

A number of rescue plans were debated, including VW taking over the automotive business of Porsche AG. The meeting ended at 10 p.m.

Governor Wulff discussed the situation with the chancellor. Both of them wanted to use their contacts with the banks to help the luxury sports car manufacturer raise money.

The next day, Porsche CEO Wiedeking and CFO Härter negotiated possible loans with a number of financial institutions in Frankfurt. Meanwhile, this time a larger group of people met in Wulff's state chancellery.

Wolfgang Porsche was shocked and speechless as he followed the discussion. He had no idea that Porsche was in such dire straits. VW CFO Pötsch received regular updates on his mobile phone on the ongoing banking negotiations in Frankfurt. The situation changed continuously, with some banks bailing out for good, while others increased their loan commitments.

The chairman's committee of the VW supervisory board -- gathered in Wulff's state chancellery -- approved €700 million in bridge financing, granted by VW to Porsche. The Porsche and Piëch families had to put up parts of their car dealership company in Salzburg, Austria as collateral.

On March 24, Porsche CFO Härter also had to negotiate additional loans. It wasn't until 11:00 p.m., one hour before the expiration of the old loans, that Porsche had managed to refinance its €10 billion loan. This is what the carmaker officially announced. The company made no mention of the crisis meetings.

Porsche executives gave the impression that they needed the loans to acquire additional VW shares. But in reality the money primarily served to pay off debts incurred from the purchase of VW shares. Porsche also failed to disclose that some of the banks involved had also taken this opportunity to reduce Porsche's short-term operating credit, which is used to finance ongoing business expenses, such as paying suppliers' invoices. And the interim loan from VW of over €700 million was treated as if it were top secret material.

This last loan reveals just how close a call this was for Porsche. And it illustrates a grotesque situation. Ironically, it was VW -- the very company that Porsche CEO Wiedeking had attempted to dominate with a control agreement -- that saved him. Ironically, it was governor Wulff and VW works council head Osterloh -- men whose influence at VW Wiedeking wanted to reduce -- who helped the Porsche CEO out of this tight spot.

The two men had good reasons not to let Porsche slide into bankruptcy. An insolvency could have grave consequences for VW as well. Porsche has a 50.8 percent stake in the company. If the sports car manufacturer were to fail, these shares could be swiftly sold to a Chinese automotive company, or perhaps even a buyout firm. 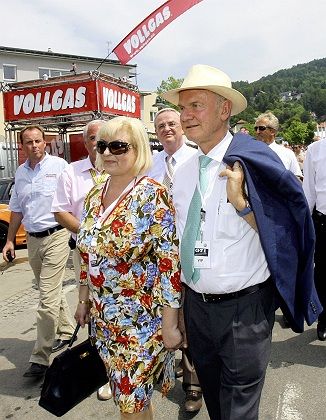 Porsche co-owner Ferdinand Piech (right) and his wife Ursula at a meeting of Volkswagen Golf GTI enthusiasts in Austria in May: VW has good reasons not to let Porsche slip into bankruptcy.

But Porsche can only expect a limited amount of help from VW. The bridge financing expires in September. Then Porsche will have to find a new source of financing. And an even more dramatic deadline is looming on the immediate horizon: June 19 is triple witching hour. That's what brokers call the third Friday in the months of March, June, September and December.

This is the day when futures and options on stocks and indexes expire. As a safe hedge for Porsche's options, many banks hold VW shares -- a total of 20 percent of the common shares. When the options mature, the banks may unload their VW shares. The price of VW stock would plummet. Porsche would lose billions in depreciation on the VW shares that it still holds.

Triple witching hour is another reason why the negotiations over a possible merger between VW and Porsche, or the purchase of Porsche AG by VW, should be completed by June 3. Instead of waiting in dread until the last day, the companies should leave themselves some breathing room until June 19.

It remains to be seen how the two companies will merge. Porsche perhaps only has a future as one of the 10 brands in the VW family. But VW cannot absorb the small former attacker without first knowing the risks that are hidden in its balance sheets. Up until now, Wiedeking and Härter have refused to disclose all the details of their stock option contracts worth billions.

Wiedeking has been dealt a lousy hand, though. VW CEO Winterkorn says: "We're not under pressure." By contrast, Porsche is in deep trouble, even if CEO Wiedeking tends to gloss over the harsh realities of the situation and still dreams of a "merger of equals" with VW.

These will most likely be his last negotiations as company CEO. Even members of the Porsche family clan are no longer on good terms with him. They are deeply disappointed that Wiedeking neglected the company's finances.

Since the collapse of the Lehman Brothers investment bank in September, 2008, companies around the world have had problems acquiring credit. Yet at the supervisory board meeting of Porsche Automobil Holding SE, on March 30, 2009, Wiedeking said that "up until a week before March 24," when the €10 billion in loans were due, he was "not aware of the worsening credit situation." He also said that he didn't find out about the banks' draconian conditions for the new contracts until after he started taking part in the negotiations himself.

It's an embarrassing admission. The members of the supervisory board have great respect for the fact that Wiedeking saved the company from bankruptcy in 1993, reorganized it, and transformed it into the most profitable carmaker in the world. But that won't save his job.

Unless a fairy comes to his rescue. Or a sheik.