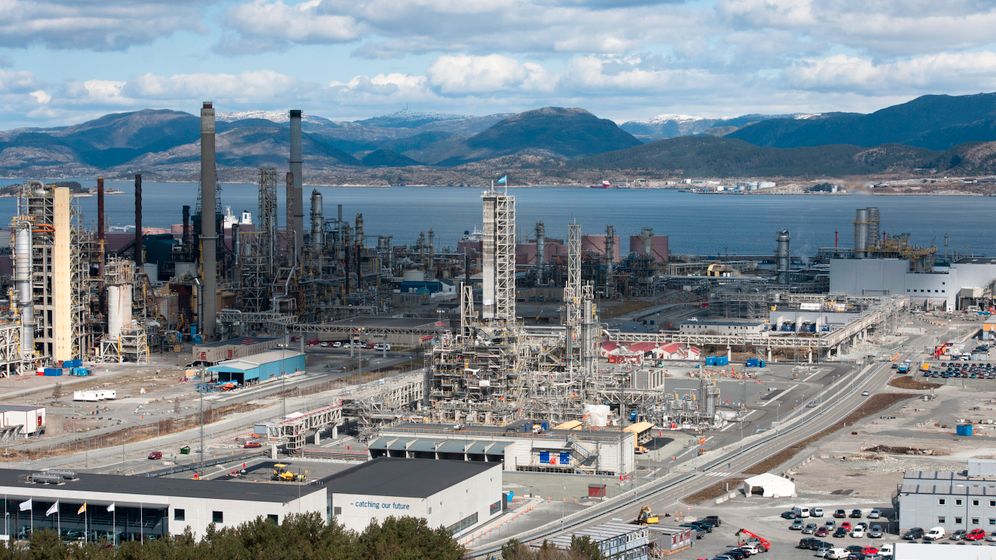 A promise stands at the entrance: "Catching Our Future" reads the slogan Tore Amundsen hurries past.

Still, it doesn't exactly smell like a clean future here in Mongstad, on the west coast of Norway, where a sweet-and-sour odor fills the air. "That comes from the refinery over there," says Amundsen, pointing to a spitting gas flare. "After all, we're in Europe's second-largest crude-oil port here," he adds apologetically as he shuts his helmet's visor.

Amundsen is headed for a part of the stinking refinery sheltered from the wind, where two towers surrounded by a maze of pipes jut into the sky.

"This is where we're capturing the future," he says. At this moment, he is so proud that he abandons his typical Scandinavian restraint. He raves about the plant, calling it "a one-of-a-kind facility worldwide."

Amundsen is the director of the CO2 Technology Centre Mongstad (TCM). The plant will filter out 85 percent of the climate-damaging carbon dioxide from the emissions of the adjacent gas-fired power plant and refinery. After that, plans call for the CO2 to be permanently stored in gas caverns. The process, known as carbon capture and storage (CCS), has never been tested on such a large scale.

A Small Gain in a Big Battle

On Monday, Norwegian Prime Minister Jens Stoltenberg and European Commissioner for Energy Günther Oettinger attended the official inauguration of the new CCS plant. Stoltenberg has characterized the plant as a milestone on the road to a climate-friendly future, calling the project "Norway's moon landing."

Of course, this is a slight exaggeration. Saving the global climate from the warming effect of the greenhouse gas carbon dioxide is a massive task. It gushes from steel mills, cement factories and chemical plants. But the most damaging thing to the climate is mankind's thirst for cheap energy. "Climate-friendly wind and solar energy won't be enough," says Amundsen. Statistics compiled by the International Energy Agency (IEA) back his assertion: In China alone, the amount of electricity produced by burning coal has increased six-fold over the last 20 years.

At the same time, scientists note with some urgency that total greenhouse-gas emissions must be cut in half by 2050 from their 1990 level. This, they say, is the only way to stabilize the average global temperature at 2 degrees Celsius (3.6 degrees Fahrenheit) above current values. Amundsen believes that the technology in his plant can help the world solve this dilemma.

It's no accident that the CCS plant is located in Norway. There, scientists already envision a transcontinental circulation system. In their model, future pipelines could pump carbon dioxide from Central Europe to Norway's fjords, where it would help force natural gas out of underground deposits. The gas, in turn, would then be piped to gas-fired power plants in Germany. It was the appeal of this vision that prompted the Norwegian government to invest almost 1 billion ($1.3 billion) in the Mongstad test plant.

Other countries are also looking into ways to achieve an emissions-free future. One of the Persian Gulf states is currently planning to build a 700-megawatt gas-fired power plant outfitted with CCS technology. And China is investing billions in a pilot plant that will use coal to produce hydrogen, which in turn will be burned to generate electricity, thereby making it possible to capture the carbon dioxide before combustion.

But as promising as this all sounds, carbon-capture techniques are controversial, especially in Germany. Climate activists fear that energy companies merely want to use them to keep their old coal-fired plants in operation and obstruct other projects using renewable energies. Ecologists warn that the carbon dioxide could leak from underground storage sites. And politicians are afraid of citizen opposition.

A bill designed to promote CCS technology in Germany failed last year, prompting Vattenfall, the Swedish energy giant, to furiously scrap its plans for a 300-megawatt pilot power plant in the eastern state of Brandenburg. The search for permanent disposal sites has practically ground to a halt.

When German Chancellor Angela Merkel hosted an energy summit at the Chancellery last week, she mentioned CCS only once -- as a cautionary tale of how politics can torpedo climate-protection technologies.

Amundsen, the TCM's director, is undeterred by the opposition to his plant. "The realities will soon convince politicians," he says.

The Process and the Costs

Amundsen is already focusing on the plant's first test runs. "We can take readings at more than 100 locations," he explains. Indeed, whether it has to do with measuring the gas's composition, volume or conductivity, testing equipment monitors the complex cleaning procedure at every step along the way.

Two different processes are installed at the site in order to determine which is more effective in actual practice. Both processes employ a washing fluid, one containing ammonia and the other amines. While emissions bubble up the 60-meter (200-foot) tower using the amine process, they are forced through tiny holes in plates containing flowing washing fluid. The amines react with and absorb the carbon dioxide contained in the emissions. Then the mixture flows into another tower, where steam hisses through the liquid and removes the carbon dioxide so that it can be liquefied and moved into final storage.

"However," Amundsen admits, "all of these processes consume a great deal of energy."

Indeed, critics say this is the true Achilles' heel of CCS technology, and even Amundsen has no illusions about it. "In a gas power plant, we lose about 8 percent efficiency," he says, pursing his lips. "That would make the cost of electricity about 30 to 40 percent greater than it is now."

Amundsen hopes his engineers will be able to bring down the energy consumption of the CO2-filtering technology even further. For example, power-plant engineers at the German engineering giant Siemens have developed a promising method using a new and supposedly more effective washing substance, which could soon be tested in a third facility at Mongstad.

This new method might enable the engineers to cut energy losses in half. "But, at some point," Amundsen says, "we'll inevitably run up against physical limitations."

Is CCS Worth the Extra Cost?

One can also ask whether CCS technology is even worthwhile for energy companies. As part of the emissions trading scheme, they currently have to pay about 7 per metric ton of emitted carbon dioxide. But this price is too low to make CCS worthwhile. Another key factor is the rapidly falling costs of generating renewable energy. Wind energy, in particular, is probably already cheaper today than coal- or gas-fired power plants outfitted with CCS technology.

Felix Matthes, an energy expert at the Berlin branch of the Institute for Applied Ecology, says that this is why no German electricity producer has been willing to touch the new process.

Nevertheless, Matthes is critical of German politicians for giving up on the development of large-scale CCS technology, such as that employed at the TCM plant in Norway. In fact, Matthes says there is no alternative but to use CCS for emissions from steel mills and cement factories, adding that CCS critics "have no ideas for how emissions could be reduced." In any case, the IEA has calculated that almost 20 percent of the CO2 reduction needed worldwide would have to be achieved through CCS technology if its implementation is to be relatively cost-efficient.

Still, Matthes goes even further. In the end, he says, it would even be possible to extract carbon dioxide from the Earth's atmosphere by using the CCS technology elsewhere, such as in wood-pellet power plants. After all, he says, trees also incorporate carbon from the atmosphere into their wood as they grow. "By burning it, capturing it and storing it underground, we reduce the concentration of the greenhouse gas in the Earth's atmosphere," Matthes says.

Amundsen, the TCM's director, is pleased to hear such arguments coming from climate-protection activists. In Norway, skepticism among many experts led to less research funding than he had initially hoped for, which in turn caused the completion of the Mongstad plant to be postponed several times.

But Amundsen is optimistic about the future. "Once a product has been introduced into the market, development goes forward very quickly," he says.

As an example, he cites developments with cell phones. In 1988, when a former employer bought him his first one, it weighed 10 kilograms (22 pounds). "And now look at this," he says, pulling his smartphone out of the pocket of his overalls.