A massive gray mountain rises from the vast plains of Inner Mongolia. The artificial hill is the pride of the Chinese and the envy of the world -- at least the world of commodities traders.

Workers at the Bayan Obo mine refer to the mound as "Treasure Mountain." Up to 6,000 people work at Bayan Obo, China's largest mine, which is completely inaccessible to the outside world. The Chinese authorities are intent on ensuring that no outsiders should gain access to the craterlike landscape, and for those who do somehow manage the feat, it is akin to arriving on another planet.

There is not a speck of green on the site, only the monochromatic monotony of earth and debris. Massive dump trucks rattle around the desolate landscape, looking from a distance like giant bugs. They crawl down into the open-pit mine, which is more than 1,000 meters (3,280 feet) deep, and later crawl back up to the surface, heavily loaded with iron. It is because of these trucks that the treasure mountain continues to grow from one day to the next.

A sign on the edge of the heap lists the 71 substances it contains: iron, of course, as well as 17 metals with hard-to-pronounce names like yttrium, dysprosium and neodymium, the so-called rare earth metals. These metals, used to manufacture high-tech products like lasers and solar panels, are coveted and expensive.

Nowhere on earth are larger amounts produced than at Bayan Obo. About 40 percent of world production comes from these mines, and the People's Republic satisfies a total of 97 percent of global demand. In other words, China controls the world market.

It's a situation that has been the source of many a headache for Ulrich Grillo. Grillo runs a zinc and sulfur processing company in the western German city of Duisburg, and he also heads the commodities policy committee at the Federation of German Industries (BDI). He notes with growing concern how German companies are becoming increasingly dependent on Chinese sources of raw materials, putting themselves literally at the mercy of the Chinese. What happens, Grillo asks, if China decides to block access?

There are certainly signs that this could be happening. The People's Republic no longer wants to sell off its rare commodities at rock-bottom prices, as it once did. Indeed, government planners have imposed restrictions on exports recently. This could seriously jeopardize German industrial growth, says Grillo. "We are headed for a commodities gap," he warns.

He is not just referring to problems with the supply of rare earth metals. In fact, Grillo is more generally concerned about the supply of important industrial metals like lithium and cobalt, for example, which are used in batteries, indium and gallium, used in thin-film solar modules, or tantalum, contained in the microchips used in mobile telephones. These are the sorts of metals that are essential in the production of quality, high-technology German products.

As it turns out, the fate of Germany's future-oriented industries lies in the hand of suppliers from Latin America, Australia, Africa and, to a much greater extent, northern China. In a new study, scientists from the German Federal Institute for Geosciences and Natural Resources (BGR), which advises the German government, warn of the possible consequences of that dependence. The imposition of limits on exports of rare earths could "lead to serious bottlenecks," the scientists warn. They believe that there could be "a substantial shortage" of certain metals after 2012, and that it is "not clear" how demand for those metals will be met in the future. Does this mean that the German economy could soon run out of key raw materials? Or can the supply crisis still be prevented?

In Hanau, a city near Frankfurt in the western state of Hesse, the answers to these questions are critical to the future of Vacuumschmelze, known as VAC, a company with 3,800 employees that specializes in the production of permanent magnets. "We are watching China carefully," says European sales director Helmut Dönges.

VAC is one of the biggest importers of neodymium, a metal in the group of rare earths with extraordinary properties. Neodymium magnets have magnetic fields up to 25 times stronger than those made from conventional ferrites, even at high temperatures and in confined spaces. Neodymium is a critical material for the industries of the 21st century.

This remarkable material is transported, in the form of fist-sized, silvery-gray chunks of metal, by ship in steel drums from China. In Hanau, the pieces are ground to a very fine consistency, then pressed into molds and heated at high temperatures for use in a wide variety of applications: in elevator motors, electricity meters, dental drills, window regulators and power steering systems.

Automotive suppliers are among VAC's biggest customers, and the foreseeable boom in hybrid and electric engines will likely increase demand for its products in the future. A Mercedes S 400 Hybrid contains about half a kilogram (1.1 pounds) of neodymium. Even larger amounts are consumed by the wind turbine industry, where the rule of thumb is that about 200 kilos of neodymium are needed for each megawatt of electricity generated. The turbines' giant generators, up to five meters (16 feet) in diameter, generate up to five megawatts each.

VAC has recently been importing 400 to 500 tons of neodymium per year, or twice as much as it did five years ago. Demand for the material is expected to double once again by 2012, primarily due to growth in the wind power industry.

In a study conducted for the Economics Ministry, scientists from Berlin and the southwestern German city of Karlsruhe examined the rates of increase in the consumption of rare metals. They concluded that demand for neodymium will increase by a factor of 3.8 by 2030, while demand for gallium, which is used in photovoltaics, will grow by a factor of six.

Certain companies would be particularly affected by a reduction in the supply of rare metals. Electronics giant Siemens, for example, needs the special materials to make X-ray machines and power plant generators.

The signals coming from Beijing are unmistakable: The percentage of rare earths approved for export is shrinking. This year, China decided to reduce its exports by about a third compared with the same period in the previous year. The People's Republic keeps most of the material for its own use. The resulting shortage is part of the new natural resources strategy that the powerful Ministry of Industry and Information Technology is pursuing.

The government planners have scaled back production, apparently to boost prices, which fell sharply as a result of the financial crisis. Their efforts were successful. Recently the price of neodymium has been about $25 (€17) per kilo, four times as much as in 2003. Dysprosium, which is used in lasers, is now selling for more than $150 per kilo, a tenfold price increase over 2003.

At the same time, the Chinese intend to combine the many small mines in Inner Mongolia into a handful of mining companies, creating powerful entities like Baotou Steel Rare Earth Hi-Tech. The company, which describes itself as the "dragon's head" of the industry, is the world's largest producer of rare earths. Deng Xiaoping, China's legendary reformer, is quoted on a plaque in the lobby at Baotou headquarters: "The Middle East has oil, China has rare earth."

Even as it stockpiles its own mineral resources, China is systematically securing its access to other resources around the world, including investments in iron mines in Australia and cobalt reserves in Congo. At the same time, China is filling up its warehouses. Its zinc inventories have more than doubled since March, while its lead supplies have grown by close to 600 percent. With more than $2 trillion in foreign currency reserves, Beijing has more than enough money to fill up its stockpiles. In some cases, it even pays for resources with weapons.

A battle over coveted natural resources has now begun, as industrialized nations worldwide vie for access to the biggest reserves. Germany has remained more or less on the sidelines of this conflict until now. "Germany did not recognize the strategic importance of these resources early enough," says Christoph Eibl, a Switzerland-based fund manager and commodities expert. According to Eibl, the country has itself to blame, at least partly.

The Germans have recklessly relied on the belief that natural resources would always be available, cheap and abundant. Many companies even left the industry altogether. Chemical giant Bayer, for example, has systematically sold off its holdings in countries like South Africa and Brazil. The German government, too, has paid more attention of late to the country's access to crude oil and natural gas than to where it will get its tungsten or indium from.

For this reason, Ulrich Grillo from the BDI wants the new German government to develop a separate natural resources strategy for such materials. "We need unrestricted access to the metals," he says, "and politicians have to come to our aid." Brussels has already begun to address the issue, but at the slow rate typical of the European Union: A working group has been formed which has been tasked with identifying, by the end of the year, which metals are scarce to begin with.

It is not, however, due to some quirk of geology that China enjoys a virtual monopoly on special industrial metals. These sought-after resources are also found buried underground elsewhere in the world. In fact, geologically speaking, there should be no shortages at all. The availability of rare metals is more of a question of price.

Smelting companies in the West are reluctant to make the substantial investments needed to obtain a few tons of exotic metals, in processes that are both labor and energy intensive. China, with its cheap labor force and lax environmental laws, can afford to extract the materials, however.

German industry therefore has to find other ways out of the supply trap. One option is to recycle valuable industrial metals. Siemens, for example, completely recycles the indium in X-ray equipment. Other companies try to avoid the use of rare metals all together. In developing electric motors, automotive supplier Contitech favors the method of generating magnetic fields with electricity instead of neodymium, thereby making itself a little less dependent on unreliable sources of raw materials.

Of course, German companies will not be able to do without these materials completely, and the industry will continue to be dependent on shipments from abroad, particularly from Inner Mongolia. In China, meanwhile, strategists no longer want to limit themselves to merely mining the metals. Instead, they hope to process the raw materials into finished products in the future.

To that end, help from abroad is certainly welcome, says Chen Fucai, a government planner who works at Baotou's high-tech industrial park. He says that he has already proposed to a Bosch executive that the company develop a plant to produce electric motors in the Inner Mongolian city. The wages there are unbeatably low, there are generous tax abatements, and land can be had for next to nothing, he argues.

Of course, says Chen, prices for the rare earths are also negotiable. "Anyone who builds a factory in our high-tech park will receive a 5-10 percent discount on the raw materials." 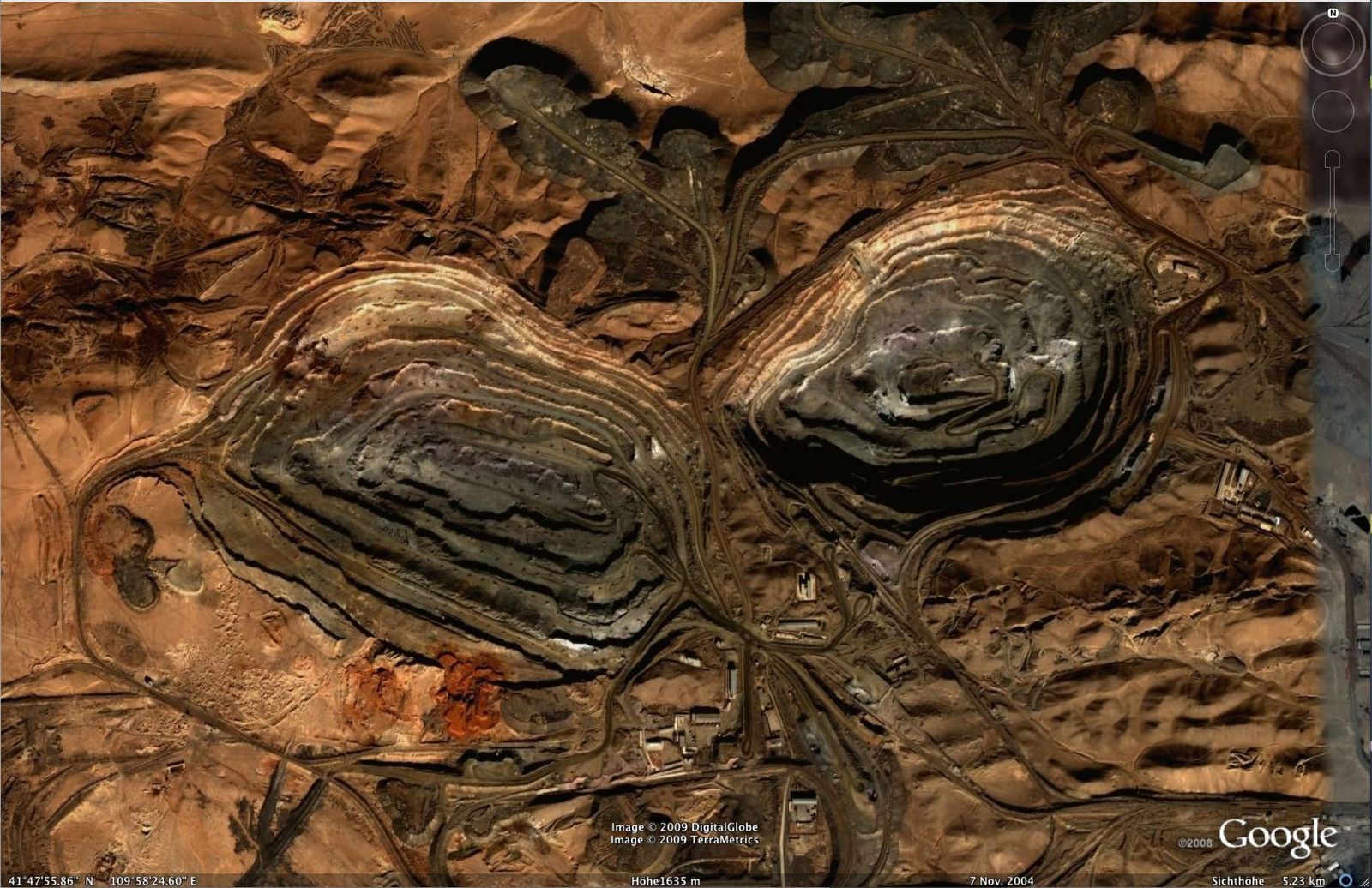 The Bayan Obo mine in China