Jürgen Neffe has had a lot of crazy ideas. Some of them have become bestsellers, Neffe's journey following in the footsteps of Charles Darwin, for example. For seven months, the author and former SPIEGEL editor travelled to places Darwin had visited on his ship the Beagle a century and a half ago in his quest to unlock the mysteries of life.

Neffe's new idea involves much less travelling. He wanted to see an e-book which allows the reader to focus on the text without distraction, but which nevertheless provides easy access to the extras offered by tablets such as the iPad (photos, background information, videos, comments, audio clips and source references). The extras, Neffe thought, should complement the text rather than compete with it.

The new format, which Leffe ended up designing himself, is called Libroid. It is similar to an e-book, but avoids the standard digital book format which involves manually "turning pages" by clicking through. And in just two to four weeks, the program -- which cost a low six-figure sum to develop -- will appear as an iPad application. Last week, Neffe presented the Libroid format to the public for the first time.

The concept of Libroid is easy to grasp: If you hold the tablet vertically, you only see text. If you turn it horizontally, two narrow columns appear on either side of the main central text column. In the example of Neffe's Darwin book, the left hand column is used for photos whereas the right contains a world map with the current location, a list of additional reference sources, and -- importantly for this book -- links to the appropriate places in Darwin's own records of his travels.

A unique feature of the Libroid format is that the columns on the left and right move with the text as you scroll up and down the text, and vice versa. Users thus always have the opportunity to access additional information relating to the exact passages they are reading. It sounds simple, but such an elegant way of combining various narrative elements has never been seen before. The photos, original passages and references to background information don't interrupt the readers' flow as they do in many iPad applications.

In short, the Libroid opens up a new narrative form -- and allows writers to do what they do best: tell stories.

It is, perhaps, telling that the Libroid idea was developed by an author rather than by a publishing house. Indeed, Neffe paid for the programming himself. Everybody in the industry may be talking about the e-book these days, but hardly anybody is looking closely at the new creative possibilities it has opened up.

Indeed, German publishers are only just now beginning -- years after the first decent e-book readers came on the market -- to experiment with using the Internet as a distribution channel. It's about time too. This July, only 26 of the 50 fiction hardback titles on the SPIEGEL bestseller list were available as an e-book in Germany. According to figures by management consultants PriceWaterhouseCoopers, 29 of 50 paperback bestsellers were available in digital form over the same period. In the United States, at the time of the launch of the Kindle reader in early 2008, 102 of 112 titles on the New York Times bestseller list were already available for the device.

The results of this meager offering? In Germany tens of thousands of e-book readers (up to 80,000 according to PriceWaterhouseCoopers estimates) and more than 100,000 iPads (according to industry rumors -- Apple will not confirm these figures) have been sold. But hardly anyone is buying digital books. By comparison, PriceWaterhouseCoopers says US publishers made more than $550 million with e-books in 2009 -- about 3.3 percent of US sales of printed books. In Germany, the e-book market share in 2009 was so low that PriceWaterhouseCoopers estimates it at 0.5 percent -- with reservations. Germany is expected to hit 3.3 percent sometime in 2015.

Furthermore, those German publications that are available for e-books are pretty bare bones -- pathetic imitations of the original. To be sure, not every novel and non-fiction book needs to have photos and multimedia extras. But sometimes it enriches the story when you can also read the original sources, track multiple narrative perspectives simultaneously, or can simply look at photos, as Neffe's first Libroid adaptation of his Darwin book demonstrates.

Just how alien the new medium is to publishers is demonstrated by the old e-book version of Neffe's book. When you look up the Darwin book in Apple's iTunes Store (sold for €9.49 or $13) the first thing you see is a piece of customer feedback: "Certainly a good book, but I'm missing the 32-page photo section (or am I just too stupid to find it?)." Apparently the publisher -- or its service provider -- had forgotten to transfer the images from the printed version into the first version of the digital book. They were supplied later with an update, another customer points out.

In the run up to the Frankfurt Book Fair, two publishers -- Rowohlt and Lübbe -- announced initial trials with so-called "enhanced e-books." These works are to cost €2 to €3 more than "normal" e-books, but will contain additional material. The historical novel "Clash of the Titans", for example, has an interview with the author Ken Follet as well as maps, family trees and links to Wikipedia. Still, it seems that most publishers see enhanced e-books as a kind of facsimile of the print edition with colorful extras -- a few photos, some videos, and presto, an e-book.

Neffe sees things differently. He wants to explore the possibilities the Libroid format offers for opening up new narrative forms. He is talking to author Katharina Hacker about a Libroid version of her novel "Alix, Anton and the Others." The text would run in two columns. When two characters meet, we can read the thoughts of one of them on the right and those of the other on the left. There are a surprising number of novels with such narrative experiments. In J. M. Coetzee's "Diary of a Bad Year" for example, the reader follows three narrative threads simultaneously -- all printed in parallel. In the Libroid format that would be much smoother.

Neffe hopes to recoup the development costs of the Libriod with the sale of the Darwin book as an iPad App. The app will cost €7.99 ($11) and will be available in German, English, Spanish and Italian. Neffe will start making a profit after the sale of 25,000 copies. He hopes that publishers use the Libroid format in the future or that authors work directly with him on Libroids. One of Neffe's financing ideas: Libroid develops a title and in turn retains up to a 12.5 percent of the authors' revenue -- with no advance.

If enough money comes in, Neffe wants to develop an Android-version of the Libroid development model and a Libroid software for authors to use themselves.

Still, there is one obstacle that will be difficult to overcome. German tax law requires 7 percent sales tax on printed books, but the full 19 percent for e-books. When publishers shift fixed development costs onto a relatively small number of e-books sold, but at the same time attempt to keep prices comparatively low, the profit margins automatically shrink. PriceWaterhouseCoopers forecasts that e-books will continue to make a loss as long as their market share remains less than 1.8 percent of the printed book market.

Neffe, for his part, doesn't see it in economic terms: "We must keep as much of the character and dignity of the book as possible," he said at the Libroid presentation. Perhaps this is the reason that it was Neffe and not a publisher that financed the Libroid development. He sees the book as a cultural object and not just as a collection of paper bound together. 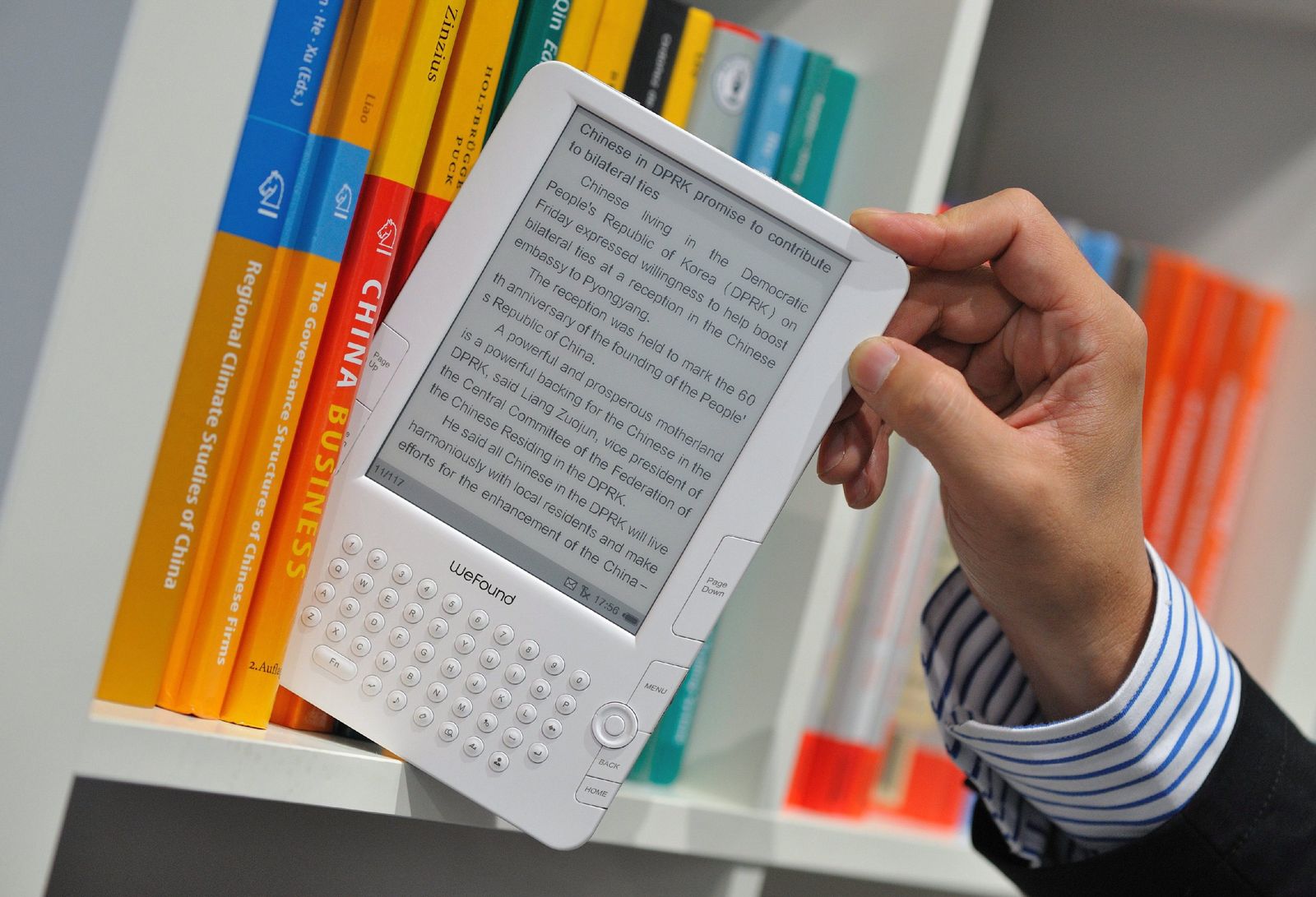