All Volker Stiny wanted to do was to sell his parents' house. His father died in 2006, his 86-year-old mother had since moved into a retirement home and the house, located in the village of Baldham on the outskirts of Munich, was too expensive for him to keep. 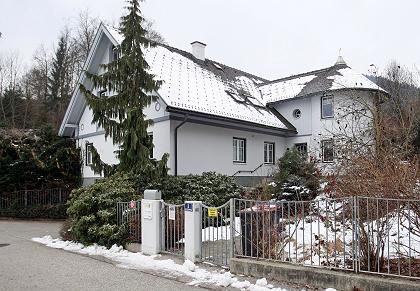 This home in the Austrian city of Klagenfurt was raffled off on Tuesday night.

As Stiny quickly found out, though, selling property these days is easier said than done. Despite lively interest in the 156 square-meter (1,680 square foot) home, no offers were forthcoming. German banks have been hit hard by the financial crisis, and property loans are hard to come by. Stiny was in a bind.

He stumbled on a solution that an ever-increasing number of people are turning to, both in the United States and in Europe. With no hope of getting anything close to market value through a traditional sale, why not raffle off the property? Numerous homeowners in the United States have already tested the waters and the method has become something of a trend in Austria in the last two months. Stiny, though, is the first to import such a sales strategy to Germany.

"I really wasn't prepared for the interest it would generate," he told SPIEGEL ONLINE. Stiny said he was also having difficulties because the number of people signing up for his contest had crashed his bank's electronic money wiring system.

Alternative trends in selling property have gained momentum in recent months as sellers have trouble getting market value -- and as market value plummets. Home values in some parts of the US have dropped by 35 percent or more, in Spain they are down 36 percent in the last 12 months and in Ireland, an economist with the University College Dublin has warned, housing prices could fall by as much as 80 percent.

In response, sellers are becoming creative. Last autumn, a man in the United Kingdom offered to give his Lamborghini to anyone who would buy his house. Chicago real estate broker Marni Yang told USA Today that "one couple even offered the buyer a complete refund of their purchase price later, when the sellers died." Others have offered large-screen televisions, gift certificates or even "tryouts," allowing prospective buyers to stay in the home for a few days to see how it feels.

Raffles have proven particularly popular. And successful: On Tuesday Walter Egger became the new proud owner of a luxury villa in southern Austria after buying a raffle ticket for €99 ($128) in a contest which rapidly sold out in December. The home's seller, Traude Daniel, said the Klagenfurt house had been on the market for about six months before she decided to raffle it off.

She said the house had an estimated market value of some €830,000 (close to $1 million) -- leading to her offer 9,999 tickets. They all sold, and the money received in excess of the market value went to cover expenses related to the administration of the raffle. In the end over 18,000 people registered for the contest, and latecomers had their ticket price reimbursed.

"Nobody could have guessed that the interest would be so great," Daniel told Austrian television on Tuesday during a live broadcast of the number drawing. "We were all taken by surprise and steamrolled by the number of people who signed up."

Daniel has found numerous imitators. In Austria alone there are some 40 Web sites offering property raffles. A few have even thrown in their cars. And a couple of ambitious Austrian entrepreneurs have started up a Web platform ( in German only) for those wanting to raffle off property.

"When we heard about the first raffle in the beginning of December, we thought the idea was very good, but realized that a lot of individual Web sites would be useless because of the interest each contest has to generate," Bernd Asbeck, who runs the site, told SPIEGEL ONLINE.

Asbeck's site currently has about 15 properties listed, but, he says, they have "30 to 40 properties" ready to pop up on the site. He says the plan is to keep the homes on the site for a few weeks to guage interest. If it is high enough, then they will start a raffle and pocket a percentage of the proceeds. No raffles have yet begun on his site -- and he says he rejects roughly half of those wanting to advertise.

"People want a castle in the mountains or a villa on the beach," he said. "They won't join a raffle for a small apartment worth €70,000 on the outskirts of some city."

Still, it's unclear just how far the trend can spread. Traude Daniel was careful to check the legality of her raffle with the Finance Ministry in Vienna. But it remains unclear how the courts might react. Asbeck is currently spending most of his time with his lawyers to come up with a water-tight legal foundation for his business.

Others didn't prepare quite as meticulously. Conor Devine of Northern Ireland launched his raffle last November in an effort to raise 650,000 pounds (€707,000) for his home just outside Belfast. Interest was slow, though tickets were sold for just 100 pounds each. And last week the company processing the online payments withdrew, fearing legal consequences of participating in a legally murky "cash competition."

Laws prohibiting such contests are on the books in Germany as well. But Stiny has found a way around them. Those interested in winning his home ( Web site in German only) must pay €19 before being allowed to take part in an online quiz contest. Those 100 players who do the best on the quiz qualify for the final drawing. The house is the grand prize, but there are numerous other prizes, too. As such, Stiny explained, his contest does not depend purely on luck. He said the skill element keeps him within the law.

"It took a while to find a lawyer who was able to find a way through the various regulations," Stiny said. "It could be a way for people in other countries to stage similar contests as well."

Stiny is hoping for 48,000 participants, which will then cover the value of the property, the cost of the other prizes (second prize is a compact car), administrative costs and a donation to charity.

The Munich native likely won't have long to wait. Already, 25,000 people have signed up for the competition. He's growing tired of it all and can't wait until it's over. He's set to do three television interviews in the next two days. "I don't have time to eat or to sleep," he said.