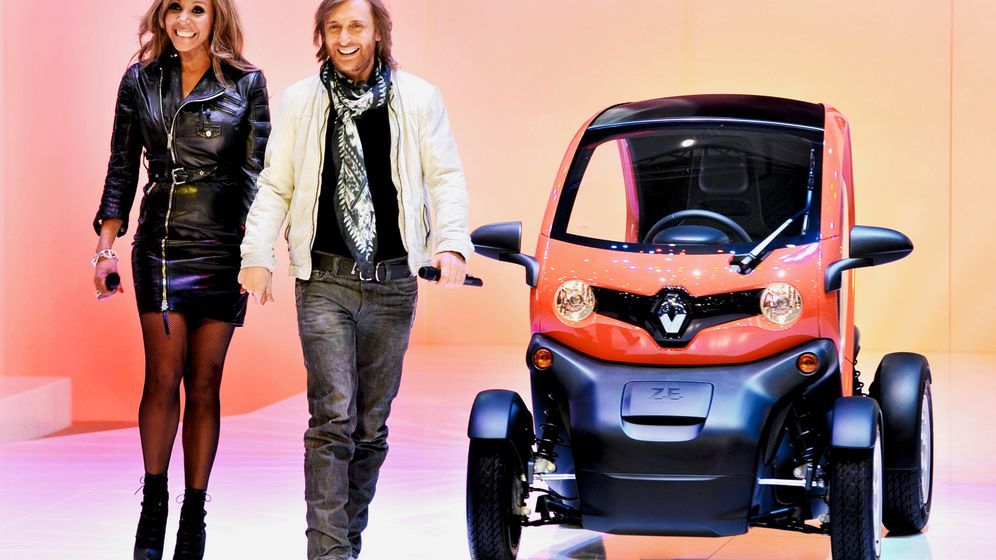 In the 1990s, the idea of stripping down automobiles as far as possible resulted in the Smart, Daimler's spherical two-seater that is now considered the epitome of a city car.

Now French manufacturer Renault has shown it's possible to go smaller still. This spring the company is introducing an urban-use vehicle that takes up far less space in traffic -- Renault says three of its new models can park perpendicular to the street in a single parking space.

This vehicle, called the Twizy, is also a two-seater, although its seats are positioned one behind the other. Its wheels are mounted outside the body of the car, making it look a bit like the "Kabinenroller" cars produced by German aircraft manufacturer Messerschmitt after World War II. On the whole, the Twizy looks as if it could have sprung from the imagination of a comic book artist.

The Twizy runs on electricity alone. Renault offers a powerful version with 13 kilowatts, which can reach speeds of 80 kilometers per hour (50 miles per hour) and requires its driver to hold a valid driver's license (possible in Germany at the age of 18). A second version of the vehicle is restricted to 45 kph (28 mph) and can be operated by drivers as young as 16.

Renault's top management calls the Twizy a "completely new concept in automobiles." Regulatory authorities have classified the vehicle as a "quad," a category of car/motorcycle hybrids that also includes a variety of all-terrain vehicles. This categorization saves the manufacturer the trouble of having to demonstrate any sort of crash safety. Still, Renault has voluntarily outfitted the Twizy with airbags and seatbelts, and says the vehicle's tubular frame structure protects its occupants "like a crash helmet."

Unlike other quads, the Twizy comes with a roof and, if desired, doors as well, although without windows. Full weather protection with heating and ventilation would have been prohibitively expensive, the vehicle's designers explain. The Twizy is meant to capture the spirit of the times with its hybrid of car and motorbike features -- although it remains to be seen whether it unites more of the advantages or disadvantages of both vehicle types.

Regardless of its actual utility, the Twizy does serve as an indicator of the opportunities and limitations presented by electromobility, a type of propulsion to which the Renault-Nissan Alliance has devoted itself as no other automobile manufacturer has done.

Company CEO Carlos Ghosn, who first gained prominence for orchestrating Nissan's financial turnaround, is banking on electric cars making a speedy breakthrough into large-scale production. With a development budget of €4 billion ($5.2 billion) at his disposal, Ghosn hopes to make Renault and Nissan the leading vendors of electric cars, promising that by 2015, the alliance will be able to produce over half a million such vehicles.

The CEO seems to have set this goal without taking into account the basic scientific parameters that inform his plan. The electric cars Renault and Nissan have rolled out so far are standard automobiles aside from the addition of batteries, and can travel no more than modest distances despite those expensive and heavy batteries. The cars also consume so much electricity that they can hardly claim to be an environmental boon.

Ghosn didn't consider a solid understanding of electric power an important step as he journeyed into the field of hybrid technology. His company offers products such as the Nissan Leaf, an electric car with about the same operating range of an urban subway system but at the price of a medium-sized car with a far greater range.

The urban Twizy, on the other hand, provides a more modest and plausible picture of how electric power can be reasonably applied at its current stage of development. The Twizy can travel 60 to 100 kilometers (40 to 60 miles), which is certainly sufficient for such a vehicle, and a lithium battery with a capacity of about six kilowatt hours provides all the power it needs.

Heavy electric cars developed from conventional automobiles, on the other hand, consume more than twice that amount of electricity and recharging them takes eight hours and robust safeguards. The Twizy requires just three and a half hours to recharge and can use a normal electrical outlet, making it a far smaller burden on the power grid.

In short, in purely physical terms, Renault's little quad is actually the more convincing application of electric power, when compared, for example, with electric sports cars such as the Tesla.

Now, Renault needs to succeed in making its pared-down vehicle the latest elite trend -- the Twizy is not a cheap, when measured by its capacity. The base price of €7,690 for the 80-kph version includes neither the half-high doors nor the battery. As with its other models, Renault plans to rent out the Twizy's rechargeable batteries for a monthly fee ranging between €50 and €72, depending on the contract.

Calculated across an assumed lifespan of 10 years, that means the Twizy actually costs more than some full-fledged compact cars.