The power struggle over beleaguered Stuttgart sports carmaker Porsche isn't one for the weak-kneed. After the company claimed on Wednesday that discussions about Volkswagen taking shares in the company had been taken off the table, new reports suggest that VW, Europe's biggest automobile manufacturer, is close to deal that would see it taking control of Porsche. 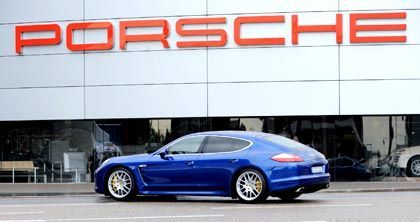 The Financial Times Deutschland and the Web site of the newspaper Die Welt are reporting that Porsche's owners, the Porsche and Piëch families, have reached an agreement on a model for an integrated company. Under the plan, Volkswagen would obtain about 49 percent of the sports carmaker's shares. The plan, promoted by the chairman of VW's supervisory board, Ferdinand Piëch, would see Porsche become Volkswagen's 10th brand in a line-up that includes VW, Audi, Skoda, Seat and others.

Porsche is faced with €9 billion ($12 billion) worth of debts, most of which it incurred in its failed bid to take over Volkswagen. "Porsche is moving closer to VW because there is no other choice left," a source with knowledge of the negotiations told Die Welt. The source added, however, that no formal decision had been made. Volkswagen and Porsche have each called for special meetings of the respective company's supervisory boards to take place on July 23. A decision is expected by then at the latest.

If the cards fall in Volkswagen's favor, efforts by Porsche Chairman Wendelin Wiedeking to hinder a merger with VW will fail. Indeed, Die Welt reports, there wouldn't be room left for Wiedeking in a Volkswagen-Porsche company that would be controlled from VW headquarters in Wolfsburg. According to the Financial Times Deutschland, the executive is already preparing for his resignation and has hired a respected German labor law attorney to advise him.

A spokesperson for Porsche denied both the report that an agreement on a merger had been reached and one that Wiedeking had hired the labor lawyer. Still, speculation about Wiedeking's future has been simmering for weeks now. On Wednesday, the German business weekly Wirtschaftswoche, citing unnamed sources, reported Wiedeking was expected to leave the company. But a Porsche spokesperson said the report was false and countered: "A war is being waged through the media."

The head of Porsche powerful work's council, the employee-chosen body that looks after workers' interests, Uwe Hück, has also been critical of VW's maneuvering. "A VW merger would, in the end, hold disadvantages for the labor forces at both companies," also damaging Volkswagen, he said. Hück also expressed his backing for Porsche chief Wiedeking. He told German public broadcaster ZDF on Wednesday evening that the executive would remain in his position for the duration of his contract, which runs through 2012.

The FTD is also reporting that as part of the tentative deal the families who own Porsche have come to, the integrated Porsche-VW would also be open to external investors. The Emirate of Qatar is planning to purchase 20 percent of Porsche's options for VW shares. That would make the Persian Gulf nation the third biggest shareholder in the company after the families and the western German state of Lower-Saxony, which owns 20 percent of VW.

Banks are estimating the value of the shares Qatar wants to acquire at around €5 billion. But it is money that would go the banks and not Porsche, the paper reported. Still, it would release Porsche from the three-digit million fees it is being forced to pay monthly for its VW options. The paper said the families are also considering the option of allowing Qatar to make a bigger investment.

Meanwhile, criticism is growing against the governor of shareholding state Lower-Saxony. Günther Oettinger, the governor of Baden-Württemburg where Porsche is located, accused Lower-Saxony Governor Christian Wulff of "going over the heads of the people doing the negotiating." Porsche works council chief Hück agreed, claiming that Wullf has attempted to bad mouth Porsche to banks so that the automaker wouldn't get any more money. "Wulff wants to cripple Porsche in order to buy us cheaply," Hück said. He called on German Chancellor Angela Merkel, the head of Wulff's conservative Christian Democratic Union party, to "put him in his place."

The governor's spokesperson responded to the attack with sharp words, accusing Hück of issuing polemics and truthless claims. He said that Wulff, who is a member of VW's supervisory board, had successfully pushed for banks to provide loans to Porsche. He also claimed that all employees at Volkswagen and Porsche would benefit from an integrated company.

As a result of the economic crisis and ensuing credit crunch, Porsche has been forced to back away from its planned takeover of Volkswagen. Instead, the company is now desperately seeking new sources of funding. The sports carmaker currently holds about 51 percent of the shares in Europe's largest automobile manufacturer. With the help of banks, it also holds options on a further 24 percent of VW's shares.

Porsche works council chief Hück is expected to update employees on Thursday on the status of negotiations with VW. He is also expected to address rumors that CEO Wiedeking is close to stepping down.