In a last-ditch effort to avoid bankruptcy, Chrysler is seeking a tie-up with Fiat Group to rejuvenate its lineup with smaller, more fuel-efficient cars based on the Italian automaker's Fiat and Alfa Romeo models. 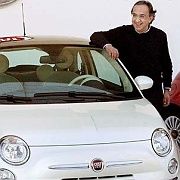 There's another model Chrysler might want to look at, too: The management model of Sergio Marchionne, Fiat's dynamic chief executive. Marchionne, who arrived in Detroit this week for talks with Chrysler executives, has pulled off one of the most dramatic turnarounds in auto industry history. He rescued Fiat from the brink of financial collapse, overhauled nearly every aspect of its operations, and installed a leaner, more flexible management structure-all this since taking the job in June 2004.

Fiat ended 2008 with $2.2 billion in profits on sales of $78 billion, and a 5.7% operating margin that was one of the best in the industry. Of course, the outlook for 2009 is much gloomier --indeed, Fiat's debt rating was downgraded to junk status on April 1 -- but the company still predicts it will end the year in the black.

It's an impressive story. But Chrysler has already suffered through a disastrous merger with another European company, Daimler. What could it possibly learn from an Italian auto executive? More than you might think. For one thing, Marchionne, 56, is as much North American as Italian. His family emigrated from Italy to Canada when he was 14, and he didn't return to Europe until he was 41, when he moved to Switzerland as an executive with a maker of packaging materials.

Ready for the US

Unlike former Daimler executives who never clicked with their U.S. counterparts, "Marchionnne understands very well how the system works in the U.S.," says Pierluigi Bellini, an Italy-based auto analyst for consultancy Global Insight.

Most important, industry watchers say, Marchionne overhauled Fiat's corporate culture, with a management playbook that should be required reading for executives trying to save basket-case companies. "There used to be a joke at Fiat that the main thing they produced was organization charts," says Karl Ludvigsen, an independent auto industry consultant in London who was a Fiat executive in the pre-Marchionne era. Now, Ludvigsen says, "people's energy has been released to make the changes that are necessary."

In a first-person account of the makeover, published by Harvard Business Review last December, Marchionne recalled that when he became CEO, Fiat had a traditional top-down decision-making structure that was hopelessly broken. "Our senior leadership wasn't used to taking responsibility, and when you've been working for years in a well-defined status quo, it's almost impossible to change," Marchionne wrote. Within months, he laid off hundreds of mid- to upper-level managers.

At the same time, he scouted management talent from Fiat's global operations, ranging from automotive plants in Brazil and Argentina to the factories of its U.S.-based farm- and construction-equipment subsidiary, Case New Holland. For example, the current head of the Fiat brand, Lorenzo Sistino, previously ran New Holland's agriculture unit in the rolling farmlands of Pennsylvania Dutch country. He also now oversees branding at Fiat's Iveco truck unit.

In addition, Marchionne recruited a new engineering boss from outside Fiat, leading to improved reliability and a dramatic reduction in development time for new models, from four years to only 18 months for the revival of the classic Cinquecento, or 500, a peppy new minicar that has been a smash hit in Europe. And he promoted younger brand managers, urging them to benchmark themselves against non-automotive companies such as Apple. "I like to think of the Cinquecento as our iPod," he wrote in Harvard Business Review.

Marchionne also proved himself a smart dealmaker. Soon after taking over, he persuaded General Motors, which had taken a stake in Fiat in 2000 but was eager to extricate itself from the then-floundering company, to pay Fiat $2 billion to cut itself loose. Besides the extra cash, GM's departure freed Fiat to cut deals with other automakers, such as an agreement with Ford to share a factory in Poland, where Fiat makes the Cinquecento and Ford makes its Ka minicar.

Marchionne's casual style -- he almost never wears suits, favoring sweaters and unbuttoned shirt collars instead -- adds to the atmosphere of openness in the company. So, too, does his frankness about Fiat's shortcomings. In recent months he has warned that the company is too small to survive on its own and must link up with another carmaker.

A Good Deal for FIAT

But why Chrysler? Though the Detroit-based giant is tottering, it offers Fiat a ticket back into the U.S. market after a 25-year absence. While details of the possible deal are still being negotiated, Marchionne has said Fiat would not put up any cash or assume any of Chrysler's debt. Indeed, it probably couldn't: As the global economy worsens, Fiat's cash pile has shriveled from $9.1 billion to $5.1 billion over the past year, while its now junk-rated debt has soared to more than $7 billion.

Yet taking a stake in Chrysler presents minimal financial risk to Fiat, Global Insight's Bellini says. And even if Chrysler goes bankrupt and is liquidated, Fiat could take advantage of the situation by buying some of its assets. "It's a very, very good opportunity for Fiat, and a last chance for Chrysler," Bellini says.

However, there's another risk. Managing a tie-up with Chrysler could distract Marchionne and his key deputies from the task of keeping Fiat's revival on track. For example, the Italian automaker might have to delay introduction of new models while it scrambles to help Chrysler start production of cars based on Fiat platforms. Helping to rescue Chrysler will either burnish Marchionne's reputation as a turnaround whiz -- or tarnish it.