The historical first simply couldn't end without the usual mantra. At the first-ever press conference in the 98-year history of the US Federal Reserve, Fed Chairman Ben Bernanke announced last Wednesday what everyone was expecting, and wanting, to hear. Flanked by the Stars and Stripes as well as the flag of the US central bank, he said: "The Fed believes that a strong dollar is both in American interests and in the interest of the global economy."

Bernanke has often made similar pronouncements -- as has US Treasury Secretary Timothy Geithner. Invoking the dollar's strength was also part of their predecessors' standard repertoire.

This familiar litany is actually a worrying sign, however. The statement is always made when things are not looking good for the dollar. In one sense, currencies are just like people: Anyone who is genuinely strong doesn't feel the need to emphasize that fact over and over.

In reality, the US currency is currently plagued by an acute bout of weakness. Its exchange rate has stabilized at around $1.50 to the euro, which is not far from the low point that it reached before the outbreak of the financial crisis. Since the beginning of the year, the dollar has lost 13 percent against the euro.

The decline in the value of the dollar on the currency markets, however, is merely an indication of a profound global development. The dollar is in danger of losing its role as the global reserve currency and the world's benchmark unit for exports.

Not only is the euro gaining in importance -- despite the debt crises in Greece, Portugal and Ireland -- but the currencies of emerging nations like China, India and Brazil will likely play a larger role in the near future, both in global trade and in the investment practices of central banks. The dollar no longer has a monopoly, according to US economist Barry Eichengreen, a professor at the University of California, Berkeley.

There are many reasons, both short-term and long-term, for the decline of the greenback, a currency once coveted around the world. The fiscal policies of US President Barack Obama and his predecessors cast doubt over whether the US will ever be able to repay its debts. The rating agency Standard & Poor's has already threatened to downgrade the credit rating of the only remaining superpower.

To make matters worse, the low interest rate policy pursued by Bernanke's Fed will further erode the value of the dollar. The central bank is printing money virtually without limit to finance the US federal budget. That's a guarantee for higher inflation.

In addition, the US is losing its dominance in the global economy. In the mid-20th century, it manufactured the majority of all goods in the world. Today, the US share of global GDP is 24 percent, and is expected to fall even further.

America's declining importance also has consequences for the role of the dollar. "It is not obvious why the dollar, the currency of an economy that no longer accounts for a majority of the world's industrial production, should be used to invoice and settle a majority of the world's international transactions," economics professor Eichengreen writes in his book, "Exorbitant Privilege: The Rise and Fall of the Dollar and the Future of the International Monetary System."

These changes are being felt only gradually, but there is no mistaking them. The dollar is still used in twice as many foreign exchange transactions as the euro, but its share has steadily declined over the past 10 years, while the popularity of the euro has risen.

It's a similar story when it comes to currency reserves. Last year, the world's central banks kept 61 percent of their holdings in dollars. In 2000, this figure was nearly 10 percent higher.

The vacant space that this leaves in the banks' vaults is primarily filled by the euro. Its share rose from 18 percent in 2000 to around 26 percent 10 years later.

'Room for More than One Key Currency'

The euro is also gaining ground in its role as a pegged currency. In mid 2009, 54 countries had tied their currencies to the dollar, and already half as many had been pegged to the euro.

Many economists expect the US currency to continue to wane in importance -- and not just because the Europeans are gaining ground with their common currency. "As the world economy becomes more multipolar, its monetary system, logic suggests, should similarly become more multipolar," Eichengreen writes.

Working on behalf of the German Finance Ministry, Ansgar Belke, a professor at the University of Duisburg-Essen and director of research at the German Institute for Economic Research in Berlin, has already conducted studies on emerging global monetary trends. He has long been convinced "that the US dollar's era as a monopolistic key currency is over," and that in this globalized world, "there is room for more than one key currency."

The euro has excellent chances of continuing to gain ground. Belke predicts that its success will be decided in the competition "over who has the better stability strategy," which is essentially a contest between the Fed and the European Central Bank (ECB). It all boils down to the simple question of who is better at keeping inflation under control.

US Economy Flooded with Liquidity

The current outlook for the Europeans is not so bad. After all, the ECB has already raised interest rates to quell inflation fears, while Bernanke's Fed continues to flood the US economy with liquidity.

Belke believes that a further condition for the rise of the euro is the "defragmentation of European markets for government bonds." In plain English: German and French bonds could disappear from the market and be replaced by standardized European government bonds, but only if all member countries manage to keep their government debt under control.

Politicians are still shying away from such Eurobonds because they fear for the creditworthiness of their countries. But if a market for government bonds similarly attractive to the one in the US were to emerge, Europe's politicians could no longer avoid this financing instrument.

In addition to the dollar and the euro, Belke believes that the Chinese yuan, also known as the renminbi, has the best chances of establishing itself as an international key currency, trailed at some distance by the Indian rupee and the Brazilian real.

These are currencies from countries with highly dynamic economies and, in contrast to Europe, steadily growing populations. These mediums of exchange could serve as key currencies for adjacent regions, just as the euro already does today, and thus continue to push back the dollar.

But these countries would first have to fulfill a number of conditions, according to Belke. They would have to ensure that their currencies could be easily exchanged into any other currency, at any time. Furthermore, they would have to develop strong financial markets. Currently, both of these conditions are only fulfilled to a very limited extent.

To change this, the G-20 countries, a group of the world's leading industrialized and emerging economies, have established a working group to reflect on a future global monetary system. It is headed by Jörg Asmussen, an influential state secretary in the German Finance Ministry, and his Mexican counterpart.

"We have a monetary system in transition," says the senior German official. The dollar will certainly not lose more importance suddenly, he says, but the trend is clear.

Asmussen doesn't see this new monetary diversity as detrimental. Quite the contrary: The more currencies that play a global role, the more stable the system, he argues.

That may sound paradoxical at first, but it also makes sense. While the exchange rates of virtually only the dollar and the euro are currently fluctuating, in the future this adjustment pressure could be spread across a number of currencies. The euro would not rise in value nearly as rapidly as it is currently doing if the Chinese yuan were already freely traded.

Yet the yuan remains pegged to the dollar, and is almost perfectly mirroring the greenback's declining value against the euro -- despite China's robust economic fundamentals. Indeed, the yuan should actually be rising against the euro. Such monetary policy distortions serve to consolidate global imbalances that threaten the world economy.

Just as the dollar is not about to lose its importance overnight, the yuan's importance is not suddenly going to massively increase. In any case, Asmussen and his colleagues in the G-20 working group realize that they have a long road ahead of them.

As a first step, there are plans for the Chinese to take part in the Special Drawing Rights (SDR), the International Monetary Fund's unit of account. This is an artificial currency that can be exchanged for real money.

If the yuan were part of the currency basket which makes up the Special Drawing Rights, it would at least be indirectly represented on the international financial markets. Chinese representatives in the G-20 working group have already agreed in principle to this step. The aim is to establish a timetable before this November's summit in Cannes.

The journey may be a long one, but Eichengreen from Berkley sees it as irreversible nonetheless. "The euro in five years, and the yuan in 10 years, could be serious rivals to the dollar." 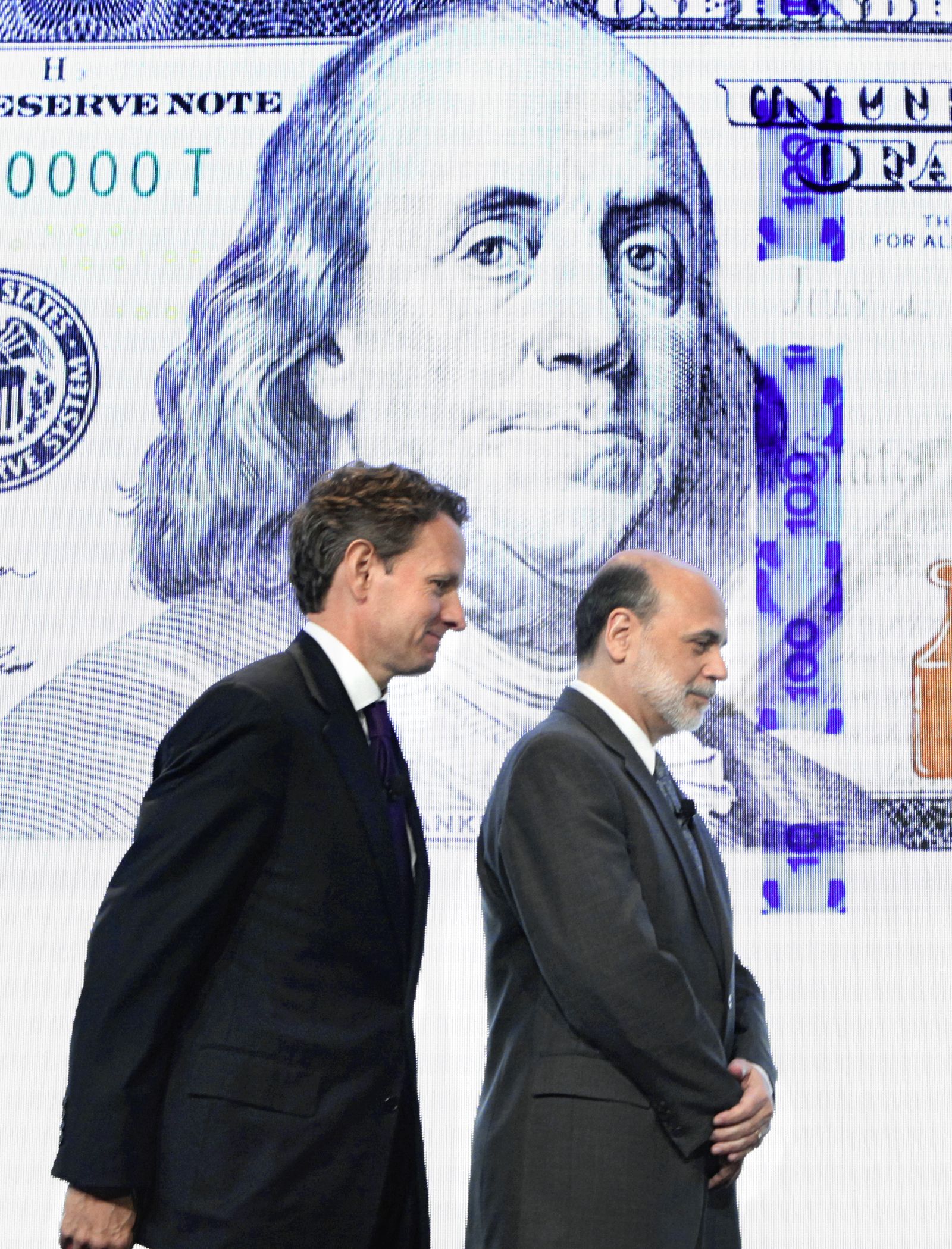 US Treasury Secretary Timothy Geithner and Fed Chairman Ben Bernanke both believe in a strong dollar.