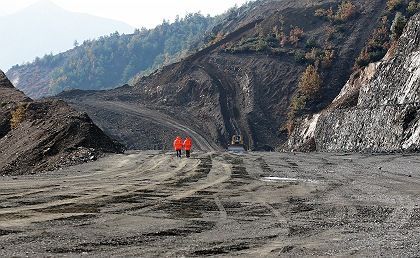 The road to Europe's largest highway project winds through villages where one sees old women in black head scarves and the occasional horse-drawn cart. Then, on a seemingly deserted plateau, comes a sign with a triangular logo: Transylvania Motorway. Turn left, and suddenly you're in the middle of a small city, with stacks of temporary housing containers, a small mountain of gravel, and a parking lot full of identical Nissan four-wheel-drive pickup trucks.

That's the first incongruous thing in this region that many people associate -- inaccurately -- with dark castles, primitive forests, and vampires. The second incongruity is Michael John Mix, a barrel-chested American in cowboy boots with a picture on the wall of his office showing himself holding a massive catfish. What's a guy with a Kansas twang doing in the middle of Transylvania? "I like building stuff, you know," Mix says in a deep voice that many a country-and-western singer might envy.

He could hardly have found a better way to do what he likes. Mix is project director for the Bechtel Group in Romania, overseeing construction of a $3.2 billion, 258-mile divided highway that will more than halve the driving time to Western Europe. The Autostrada Transilvania, as it's known in Romanian, is a dramatic example of the kind of emerging market infrastructure projects that are fueling sales for companies such as San Francisco-based Bechtel, Germany's Hochtief, and Norway's Aker Kvaerner.

Romania demonstrates why many emerging countries desperately need such projects if they are to continue their rapid growth. The Romanian economy grew more than 6 percent in 2007, economists estimate, but the nation could develop even faster if travel and transport were easier. With 22 million people living in a territory the size of Oregon, Romania has fewer than 100 miles of high-speed highway, by some estimates. Airports and railways also need upgrading.

From the city of Cluj-Napoca, where companies including Finland's Nokia and St. Louis-based Emerson Electric are building major manufacturing facilities, the 240-mile drive to Budapest is at least six hours over a winding, bumpy, two-lane road that passes through the middle of practically every village along the way. Bad weather or heavy truck traffic can easily add several hours to the trip.

When Bechtel completes work on the Transylvania Motorway from Cluj to neighboring Hungary's E71 superhighway in 2011, the driving time will be cut almost in half. Vienna, the gateway to Western Europe, will be about five hours away, compared with about nine hours now. By 2013 the motorway and several smaller projects will connect Transylvania to the Romanian capital of Bucharest. In effect, Romania, which joined the European Union in 2007, finally will be physically connected to Europe as well.

Even before the highway begins handling traffic, it is helping the local economy. Nokia chose Cluj as the site for a new handset factory in part because of the region's improving infrastructure, says John Guerry, managing director of the plant, which is scheduled to begin producing handsets for Europe and Africa by the end of March.

In addition, Bechtel, which is doing the project in partnership with Istanbul-based engineering giant Enka, has become a major employer in the region. Already 3,500 people are working on the motorway, a number that will rise to 8,000 at the peak of construction. Many workers live at one of the three temporary villages Bechtel has built since construction began in 2004. The village where project manager Mix works, known as the Savadisla Camp, has its own asphalt factory as well as a facility to produce steel-reinforced concrete beams for bridges and overpasses.

The beams, each made to order on site and stenciled with a number to indicate its place on the highway, are so big that they can't travel over existing Romanian roads. So Bechtel is building the highway out in both directions from the Savadisla Camp, hauling the beams over the motorway as sections are completed.

Already, much of the road surface is graded and awaiting asphalt. Upright supports for bridges stand in the snowy countryside, where the only people are shepherds tending their flocks. But the primitive appearance of rural Transylvania is deceptive. Nearby Cluj is a college town with 100,000 students and a well-regarded technical university. Bechtel has been able to draw on a steady supply of engineers. "There's a huge talent base here," Mix says. "You find really ambitious and educated people."

Many of them seem to share Mix's enthusiasm for the Transylvania Motorway. One is Daniela Oprisca, a 26-year-old civil engineer who earned her degree from the technical university in Cluj. "For a Romanian engineer, this is very exciting," Oprisca says, as she steers a pickup truck along the temporary road built parallel to the future motorway. "When I came for the first time I was like a child, 'Wow!' " When the highway is complete, Romanians used to suffering on the existing roads may feel the same way.