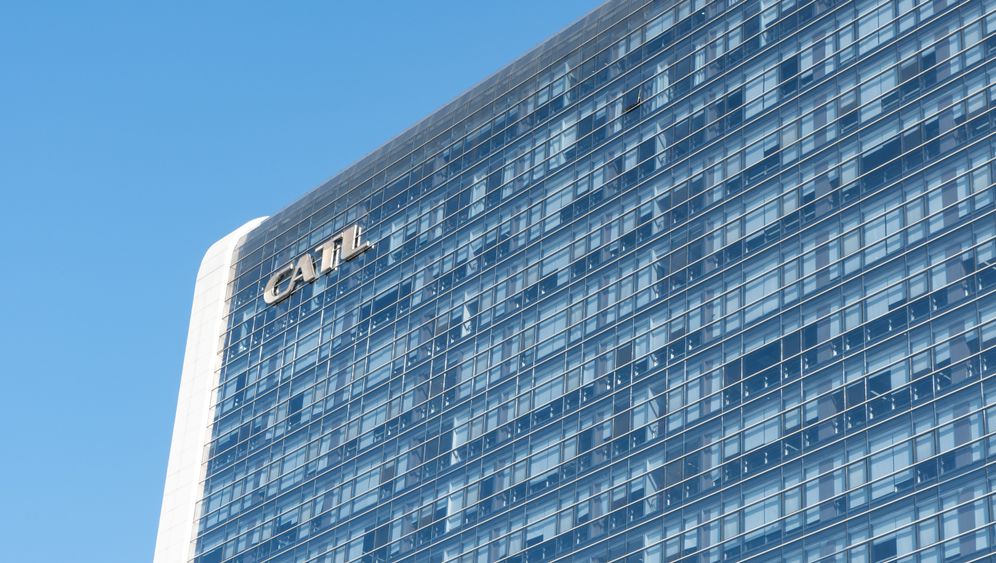 The vulnerability of the German auto industry will soon be on full display at a major highway junction near Erfurt. The Chinese conglomerate CATL plans to build a factory for electric car batteries smack dab in the middle of the country. If all goes according to plan, it will take up 87 hectares (215 acres), making it the largest such factory in Germany and perhaps even in Europe.

Construction is due to start in March or April of this year and is supposed to move quickly. Matthias Zentgraf, 55, the European head of CATL, isn't leaving that open to doubt. Zentgraf was born in Offenbach, not far from Frankfurt, and has spent years working in the German car industry. On a laptop, he demonstrates how his company does things by showing images from the city of Ningde, in southeastern China, where CATL's headquarters is located. As he types on the keyboard, buildings grow taller, just like the video game "SimCity."

The buildings include factory spaces for manufacturing batteries, housing for workers and, a few streets away, for staff, research laboratories, a high-rise for the company's management. One last click and CATL's headquarters is complete. The conglomerate was founded in 2011, only eight years ago. "An entire city was built," says Zentgraf.

The manager is expecting his project in Erfurt to happen in similar fashion. "Probably not quite as fast," he says. But it will still be very quick.

The Chinese want to invest 240 million euros ($272.3 million), creating approximately 600 jobs and producing battery cells with a total capacity of 14 gigawatt hours (GWh) per year. That would be enough to power 300,000 BMW i3 model electric cars. And that's only meant to be the beginning. At the end of last year, Zentgraf says, the company got a "real boost in orders." The project's target size is now 60 GWh, and he even believes 100 GWh are realistic: "We have a lot of work ahead of us," he said.

CATL's plans in Erfurt are unparalleled in terms of size. That's why the German car industry is keeping close tabs on the development, half in awe, half in bewilderment, as a Chinese company establishes itself as a primary supplier of a core electric car component for BMW, Daimler and the like. Battery systems make up about a third of electrical cars' net added value. How did that happen in the first place? And is that kind of development even desirable?

The answer points to a vulnerability in the German car industry, which was way too slow in recognizing the importance of battery technology. For far too long, the companies' management boards were dominated by supporters of the combustion engine, who saw electric cars as a marginal phenomenon and dismissively described batteries as "commodities." They saw the idea of a battery manufacturer in Germany as unnecessary.

Now the misguided bullheadedness of this position has become clear: Electric mobility is on its way to becoming a mass phenomenon and battery manufacturing is becoming a science. In the future, a car's appeal won't just be determined by its overall engineering, design or price, but also by the quality, durability and range of its battery.

According to the consulting firm P3, electric car sales will increase by about tenfold between 2018 to 2025, eventually reaching around 30 million vehicles per year. Global demand for batteries is expanding at a similar pace, and is expected to reach over 1,200 GWh by 2025. The fallout from the diesel emissions scandal, the recent decision to ban diesel cars from several German city centers and the EU's stricter emissions standards are putting the car industry in a delicate position. It has a supply problem.

The OEMs, or original equipment manufacturers, as carmakers are referred to in industry jargon, need cells, cells and more cells. But these are primarily made in Asia, where most of the world's gigafactories are located, according to the consulting firm Benchmark Mineral Intelligence. Of those, as many as 46 are located in China alone. Meanwhile, Germany and Europe face a shortage of batteries.

German Federal Research Minister Anja Karliczek, a member of the center-right Christian Democratic Union (CDU), warns of dire consequences. At a conference in Berlin in late January, she argued that batteries are an "existential subject" for Germany. She said she regrets how small of a role the country is playing in the sector: "We are dependent on Asia."

That seems unlikely to change. According to P3's predictions, two Asian companies will dominate the market by the middle of the coming decade: China's CATL and South Korea's LG Chem. The two companies will, according to forecasts, make up one-quarter of the global market. The rest will fall to manufacturers located mostly in China, South Korea and Japan -- but not Europe.

Things could have gone differently.

The board of Bosch, an automotive supplier, long debated whether the company should open a battery factory, and ultimately decided against it. The Stuttgart-based corporation was worried about the financial risk, though their traumatic experience with photovoltaics might have also played a role. A few years earlier, it had entered the solar market and lost billions.

Daimler also had some bad experiences. The car company began manufacturing battery cells near the eastern German city of Dresden in 2012 at its Li-Tec subsidiary. The factory closed three years later. Even though experts gushed about the quality of its product, the factory wasn't economically viable.

The Freudenberg Group, an automotive supplier, on the other hand, is investing heavily in battery manufacturing. Last week, the company acquired XALT, a company that makes lithium-ion cells for large vehicles. But XALT is based in Midland, Michigan, and no equivalent investment in Germany is currently on the table.

Plans by the California-based electric mobility company Tesla to build a gigafactory in Germany also haven't come to fruition. In 2014, Tesla founder Elon Musk announced in an interview with DER SPIEGEL that he wanted it to happen in five or six years. Time will tell.

"When it comes to battery manufacturing, we have become a developing nation," says an industry insider. "We have fallen far behind."

Plans to Catch Up

The German market's lack of battery production isn't just worrying for car company executives. Politicians are also concerned. Federal Economics Minister Peter Altmaier, a member of the CDU, has specifically made an expansion of battery manufacturing a goal of his new industrial policy offensive. Altmaier would like consortia to be created and has set aside 1 billion euros for addressing the issue.

He would also like to see trade associations emerge on a European level. EU Commissioner Maros Sefcovic has concluded that 20 gigafactories are needed to strongly counteract Asian dominance. French President Emmanuel Macron announced on Wednesday that, in the coming five years, 700 million euros would be invested in the construction of two battery factories. One of them is to be built in Germany. "We need a European wake-up call," Macron said.

So far, plans by German consortia have been considerably more modest. Battery-maker BMZ, based near Frankfurt, and Aachen-based scientist Günther Schuh plan on building a factory with a tiny capacity of 1 gigawatt hour by 2024, possibly in North Rhine-Westphalia, but that's yet to be decided.

Schuh founded Streetscooter, which manufactures electric delivery vans for the German postal service. The engineer is also set to introduce a compact car called e.GO Life to the German market soon. As an entrepreneur, Schuh is particularly interested in securing a supply of batteries. If he doesn't worry about it, he argues, his company will be "the first to get stuck on the flytrap."

Further cooperative efforts are also being explored. A group of scientists wants to build a model factory together with German battery manufacturers and with federal government support to test new production methods, but the people involved haven't even decided on a location yet.

That said, at least German companies still play an important role as suppliers for the battery sector. Siemens provides battery factories with automation technology, while BASF supplies them with components for cathodes, which make up about 70 percent of a battery's material costs. But the crucial elements -- development and manufacturing -- are controlled by the Asian companies.

CATL, with its determination and drive toward growth, provideds some hints about how this happpened. From early on, the company's founder, 51-year-old physicist Zeng Yuqun, focused on lithium-ion technology and how it can be efficiently manufactured on an industrial scale. Today, around 1,400 CATL engineers are working to develop the batteries of the future.

Its business has grown enormously. First with batteries for buses, then for cars. Since 2016, the company's capacity has doubled annually and last year, he took the company public to finance its global expansion, turning him into a billionaire.

This exemplary rise has been fueled by the Chinese government. In China, electric vehicles are highly subsidized and it is a requirement that their batteries are supplied by domestic companies. This allows Beijing to protect fledgling battery manufacturers and enables them to grow unimpeded until they are ready to tackle the global market, which CATL is doing today.

This strategy differs considerably from that of Berlin policymakers, who have adopted a broader, more regional but also more sedate approach. In Germany, 19 institutes of the Fraunhofer Society research organization are studying batteries, and countless alliances, platforms and consortia are dabbling in the sector. These may be creating excellent technology, but they are not doing so especially fast. "Speed is currently the clincher" if one wants to satisfy customers' battery needs, says Zentgraf.

That's why Zentgraf has planned such a tight schedule for the project in Erfurt. He explains that he has opened a small office there and hired the first few employees. He is now recruiting staff, finding suppliers, building up infrastructure. He doesn't want to lose a single day, since he is racing against competitors that are also interested in building factories in Europe: LG Chem in Poland, Samsung and SK Innovation in Hungary, Northvolt in Sweden.

So far, the German car industry has only been watching from the sidelines. It remains unclear to what extent they have resigned themselves to the situation, and to what extent they would like to enter the battery manufacturing market themselves. In the long run, their suppliers won't just be making batteries, but battery systems, threatening the carmakers' net added value.

That seems hard to imagine. Presumably, car companies and battery-makers will need to cooperate even more closely when it comes to battery manufacturing in the future. At a car conference in the German city of Bochum earlier this month, BASF CEO Martin Brudermüller managed to bridge the two positions. He argued that Europe needs to build up its own high-performing battery supply chain: "We shouldn't make ourselves dependent on battery deliveries from Asia, but should instead invest much more in manufacturing cells of our own." But he said the supply chain in Europe "doesn't necessarily need to involve only European companies."

In other words, the most important thing is that the batteries are being built here, regardless of whether the company doing it is European or Asian.

The article you are reading originally appeared in German in issue 8/2019 (February 16th, 2019) of DER SPIEGEL.

Zentgraf has been following the debate with mixed feelings. It annoys him when people complain about selling out to the Chinese, but he understands that many people are disappointed Germans aren't building their own gigafactories here.

Zentgraf himself has spent a long time working in the German car industry. "I would also prefer to buy a Mercedes with a battery by AEG or Mannesmann," he says, referring to two German companies once considered technological pioneers. Today, these companies no longer exist. 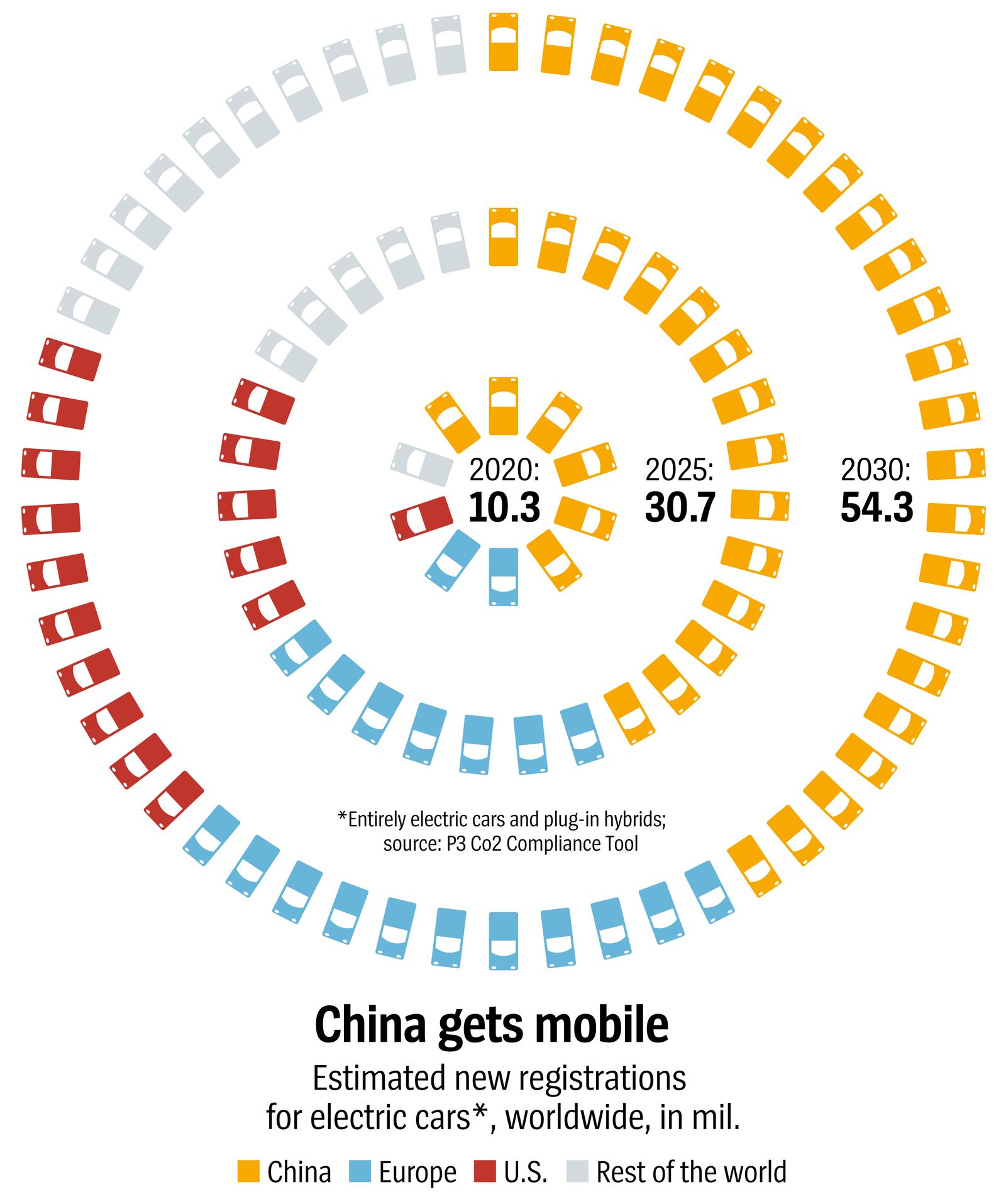