Nelson Müller knows a thing or two about food. In addition to hosting a popular cooking show on TV, he is the head chef at Schote, a restaurant in the western German city of Essen that has had a coveted Michelin star for over a year now. To make lasagna, says Müller, he needs ground meat, lasagna noodles, butter, scallions, tomatoes, Parmesan cheese -- plus milk, flour, salt and pepper.

If he were to purchase the necessary ingredients at a supermarket, he would have to calculate over €5 ($6.70) per person, he says, even if he did without refinements such as lovage, soy sauce, garlic, nutmeg and basil. Anyone who doesn't have the time or the inclination to cook, though, could -- at least until last week -- purchase a ready-made version of the dish at their local supermarket. The German retail chain Edeka, for example, sold its own brand of frozen lasagna Bolognese for as little as €1.49 ($1.99). 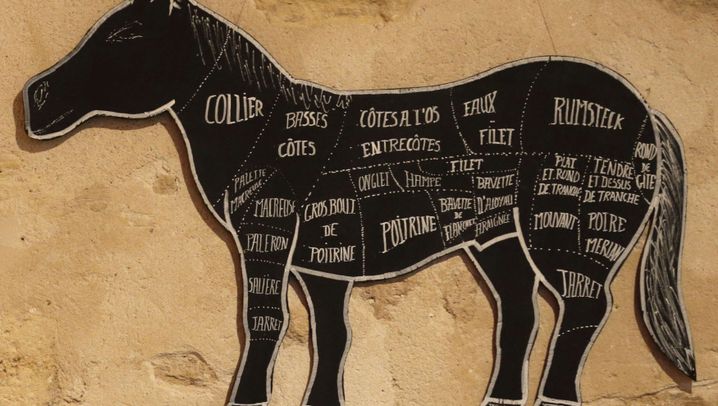 Such insanely low prices sparked a nationwide debate in Germany last week after inspectors discovered that up to 2.8 million packages of lasagna, cannelloni and moussaka by Luxembourg manufacturer Tavola contained not only beef, as indicated on the label, but also horsemeat.

Almost all major German food retailing chains, including Edeka, Rewe, Kaiser's Tengelmann and Real, recalled their products and cleared their freezer shelves after it was discovered that nearly 10 percent of the total 1,596 metric tons, or nearly 144 tons, of the convenience meals made by the Luxembourgian company between November 2012 and January 2013 had found its way to Germany.

These figures stem from an internal European Commission list that SPIEGEL has obtained. On Friday evening, it was announced that meat products sold by German discounters Aldi and Lidl were also suspected of containing horsemeat. As a precautionary measure, these companies have withdrawn their corresponding products from the market. If the suspicion is confirmed, German manufacturers would now officially be drawn into the scandal.

The horsemeat admixture does not pose a health risk, but many German consumers have an aversion to consuming horsemeat -- especially if they grew up with tales of Fury, Black Beauty and Iltschi, a trusty stallion that belonged to the fictive Apache chief Winnetou. Consequently, although some might call the reaction overly emotional, the scandal has in fact done an exemplary job of exposing the weak spots in the European food industry.

Intense price pressure from retailers and discounters is forcing food manufacturers to purchase ingredients from all around the world, including preprocessed foodstuffs. This has resulted in enormous flows of goods, and once these products have passed through the hands of three, four or more middlemen before they reach manufacturers, it becomes extremely difficult to trace their origins. This jungle of cross-border trading gives criminals a golden opportunity to re-label commodities. After all, the authorities have little control over what is stored and transferred in Europe's cold storage warehouses.

A prime example is Werk II, a refrigerated warehouse in the western German town of Neuss, which served as a gateway for a large proportion of the allegedly tainted frozen convenience food to enter the country. In December and January alone, at least 14 shipments were unloaded here, and then sent to supermarket chains. The concrete complex in the district of Norf serves as a transshipment center for goods from across Europe. A sign in German, English, French, Spanish, Polish and Russian directs delivering drivers to the reception office.

This is only one of many such warehouses. Last week, the European Commission warned of 310 deliveries from Tavola since August 2012. This concerns the noodle dishes carried by German food retailers -- but the same product was also supplied to Denmark under the "Budget" brand name, delivered to ICA supermarkets in Norway under the "Delish" name, sold in France by leading grocery stores including Casino and Carrefour, and purchased by other customers under the "Findus" brand.

Until late last week, it was still unclear who was actually to blame for the food fiasco. France's consumer affairs minister, Benoit Hamon, alleged that the Spanghero meat processing company was the first participant in the chain to slap a "beef" label on horsemeat. By contrast, a Spanghero spokesman told SPIEGEL that the firm only ordered, received and sold meat that was "reputed to be beef."

Nevertheless, Spanghero also appears to use dubious sources. For some seven years now, the company has been working with Cypriot-registered Draap Trading Ltd., at least according to its Dutch owner, Jan Fasen. Last year, Fasen was tried on charges of fraud and lost in the first instance: He is accused of selling meat labeled as Dutch and German beef, which in reality came from South American horses. The name of the company, Draap, is the reverse spelling of paard, the Dutch word for horse.

Of all the meat sold in Europe, beef actually has a reputation for being well monitored in the food industry. The EU Food and Veterinary Office (FVO) in Dublin registers the control numbers of all slaughtered animals. But the EU's clear rules become blurred as soon as the meat is chopped or mixed for hamburgers or döner kebabs. In this case, slaughterhouse waste is mixed with the last residual meat that can be removed from the bones.

As a rule, importers are responsible for their goods. Anyone who imports food to Germany must personally check to ensure that it's up to standards. Regulatory agencies only conduct spot checks. This explains why the first deliveries suspected of containing horsemeat were shipped by Spanghero on Aug. 22 -- but it wasn't until Jan. 15 that the Food Safety Authority of Ireland (FSAI) first reported horsemeat in hamburgers based on its own DNA testing.

It was only then that the scandal started to gain momentum. It comes as no surprise, though, that there are no big brand names on the long list of customers supplied by Tavola. Today's retail chains have long since become producers themselves, and the business with house brands has become a key sales driver. Nearly 40 percent of all purchases in Germany are for products with names like Gut&Günstig, A&P and tip.

Furthermore, not only do industrial food manufacturers seek to purchase their ingredients as cheaply as possible, they also require such large quantities that individual slaughterhouses simply cannot meet the demand. Consequently, wholesalers purchase from a wide range of channels and mix the goods to such an extent that it becomes virtually impossible to trace their origins.

That's how horsemeat, which is currently inexpensive, ended up in lasagna. In addition to being imported from Romania, where many horses are no longer needed in the wake of a law prohibiting carriages on main roads, it also comes from Spain, where the economic crisis has prompted many people to sell their horses to local slaughterhouses. Some 80,000 horses were butchered last year, nearly three times as many as in 2009. Unscrupulous meat dealers also make purchases on the gray market. At the Internet domain alibaba.com, it's possible to purchase commodities from around the world, round the clock: buffalo meat from India and pork sides from China -- and horsemeat, which currently sells for $350 to $500 per metric ton. There is no obligation to label the goods, which would at least make it more difficult for traders on the gray market to commit fraud.

A labeling system for processed products could have been introduced a long time ago, if not for resistance from opponents, including many German politicians. In Nov. 2011, the European Food Information Regulation came into force. It aims, among other things, to make it mandatory to indicate the provenance of all meat, and not just beef. Starting in Dec. 2014, the origins of pork, mutton, goat and poultry will also have to be clearly indicated. This does not apply, however, if the meat is just one of many ingredients, as in the current scandal. "At the time, we urged much more comprehensive regulations, but we were stymied, primarily by conservative and liberal members of the German parliament," says Martin Häusling, a member of the European Parliament for Germany's Green Party.

From a purely technical point of view, it would be easy to use bar codes on each individual package to disclose the origin of the ingredients. But this is primarily opposed by manufacturers who purchase their ingredients here and there, according to the season, price and demand. They would have to list the latest information on their packaging. What's more, any mention of Romanian horsemeat would hardly help sales.

German Consumer Protection Minister Ilse Aigner has done little to push through such a labeling system. Last week, she condemned the mixing of horsemeat with beef as a "shocking mess" and demanded "the greatest possible transparency" for consumers. She also assured the public that she supported EU efforts to improve clarity. But it was an entirely different story nearly two years ago: "I don't think that exact, detailed labeling of origin is feasible," she said at the annual conference of the German Federation of Food Law and Food Science (BLL), a lobbying group for the food industry. Aigner added that there was currently no "real possibility" of introducing such an obligation.

It's interesting to note how eagerly politicians are looking everywhere -- except at themselves -- for someone to blame for the current labeling scam. "If anyone here has reacted quickly and purposefully, it's us," says the CEO of one of the affected retail chains. After the initial evidence surfaced, he says, in addition to pulling all suspected products from the shelves and ordering laboratory tests, the retailer immediately informed the authorities. "Now everyone is acting as if we were against transparency, but that's just to divert attention from their own shortcomings," says the manager.

The chronology of events effectively shows once again how difficult it is in Germany to appropriately react to suspected cases. After the first cases surfaced in Britain, Aigner's ministry sent a memo on Jan. 30 to the authorities responsible for food inspections at the state level. With "Non-declared horsemeat in hamburgers" as the subject line, the e-mail suggested that the authorities "more closely monitor whether such products were also circulating in Germany." There were no reactions. It wasn't until the EU's Rapid Alert System for Food and Feed (RASFF) sent a message to Germany on Feb. 12 that government inspectors went into action. By then, many of the lasagna portions had long since been consumed.

An additional weakness of the German warning system is that, as long as no documented health risks exist, government agencies are not allowed to mention product names or manufacturers.

"The legal incentive system doesn't work," says Matthias Wolfschmidt from the consumer organization Foodwatch. Currently, there is nothing to motivate retailers to sort out house brands with false declarations, he argues, because the sector can only be held civilly liable for ridiculously small amounts of money, but is not criminally liable. "Big fines would prevent widespread fraud such as this," he contends.

There is currently not much to deter unscrupulous businesses. A southern German meat retailer, who sold döner kebab ingredients in the so-called rotten meat scandal in 2005, was sentenced to three years in prison -- but he didn't have to forfeit his profits from selling the re-labeled meat. 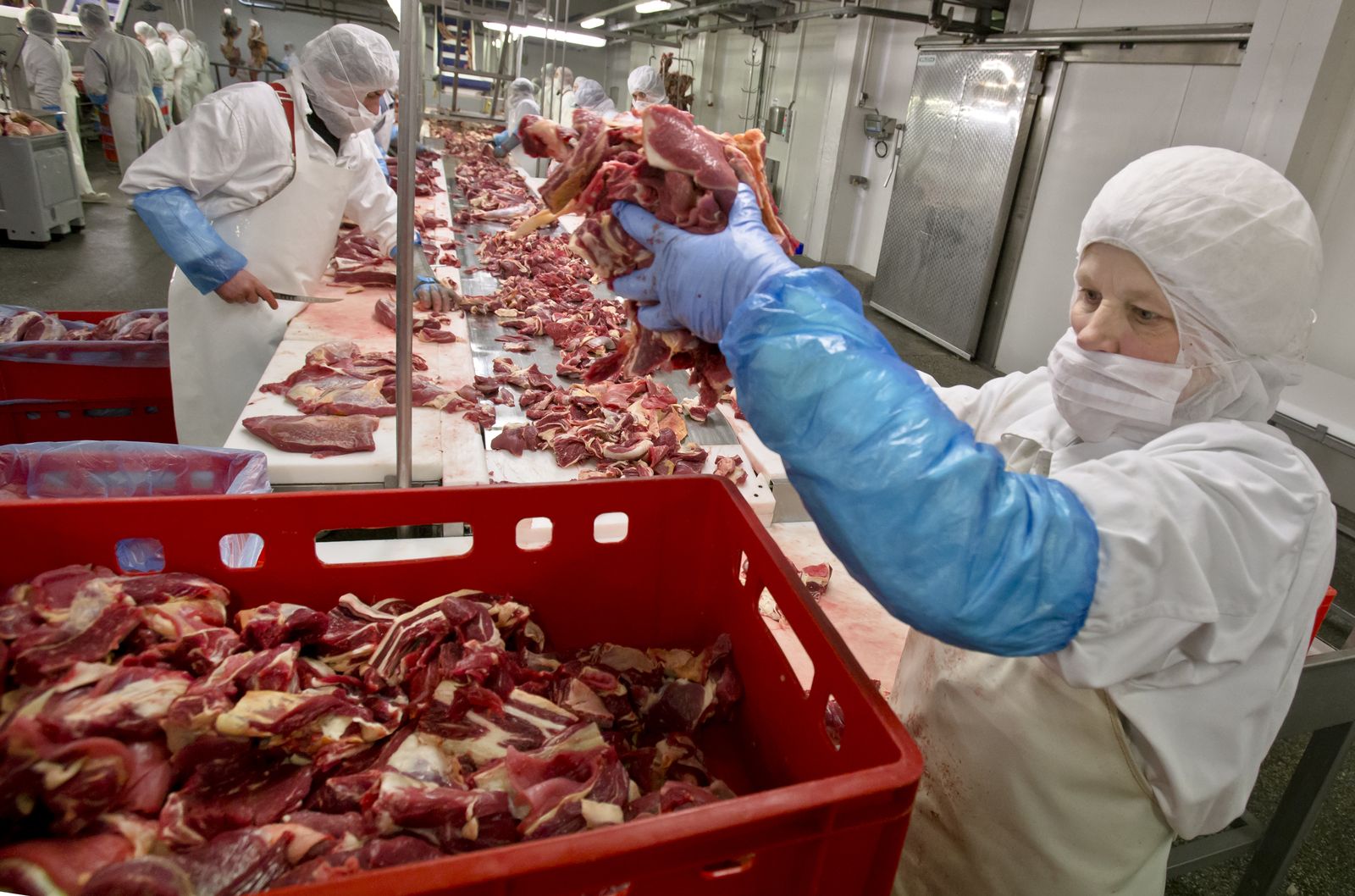 A worker handles meat at the Doly-Com abattoir, one of the two units checked by Romanian authorities in the horse meat scandal. 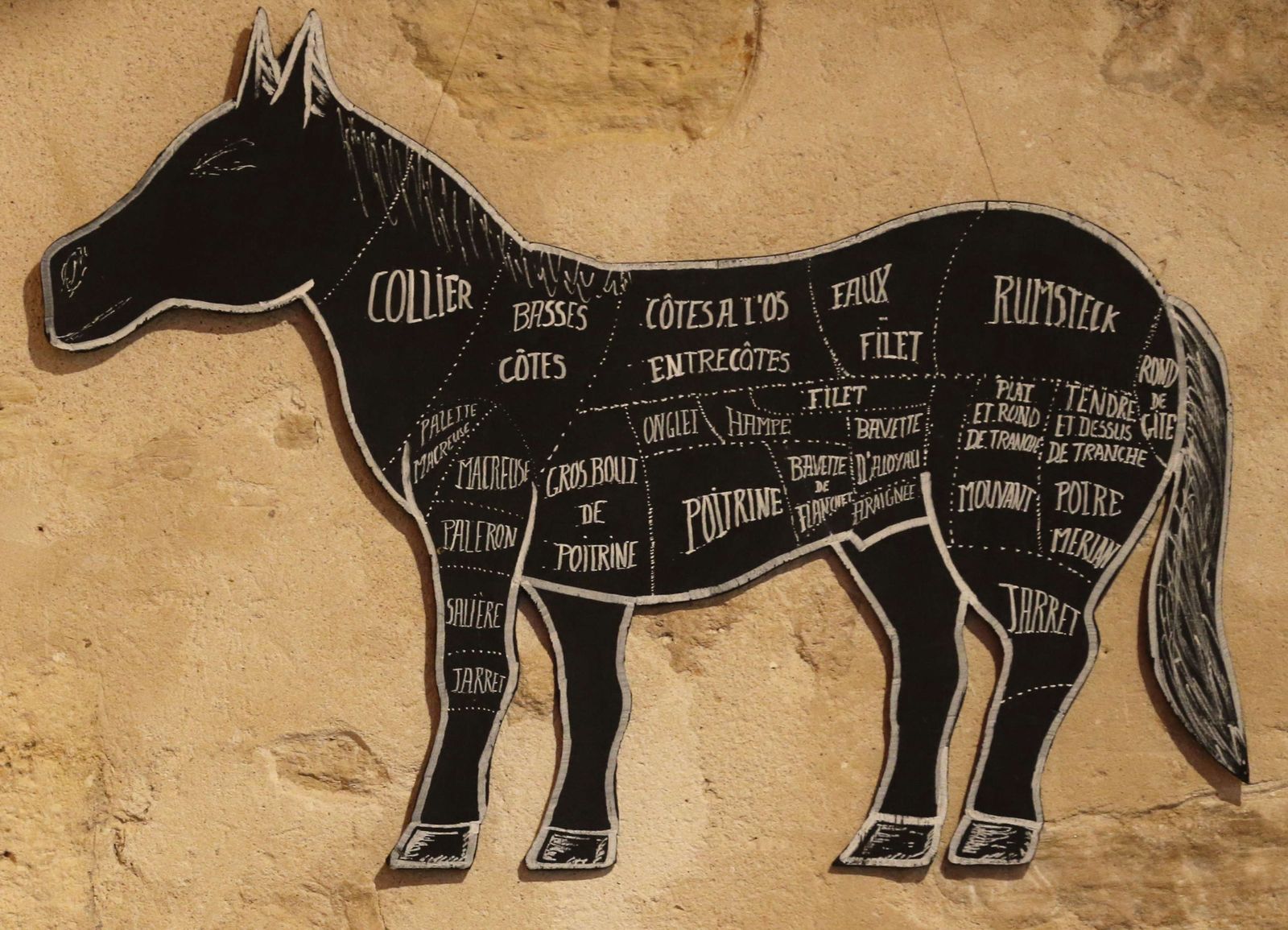 Europe's horsemeat scandal keeps broadening as contaminated products are pulled from the shelves in several countries. Investigations have begun to center on a French company and a Dutch broker. 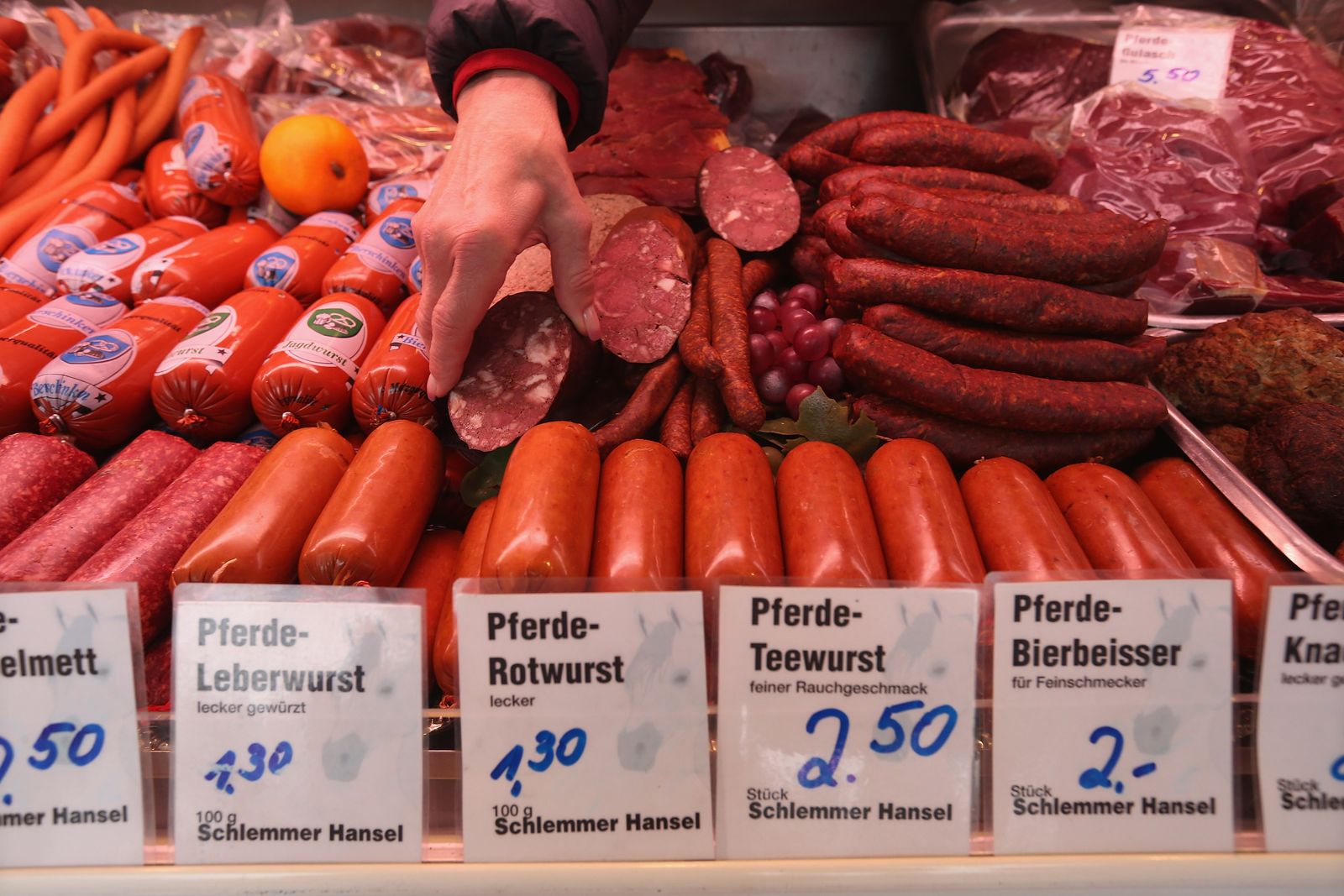 Even in Germany, horsemeat is relatively common. Here, a shop assistant in Berlin arranges horsemeat sausage at an open-air market on Thursday.