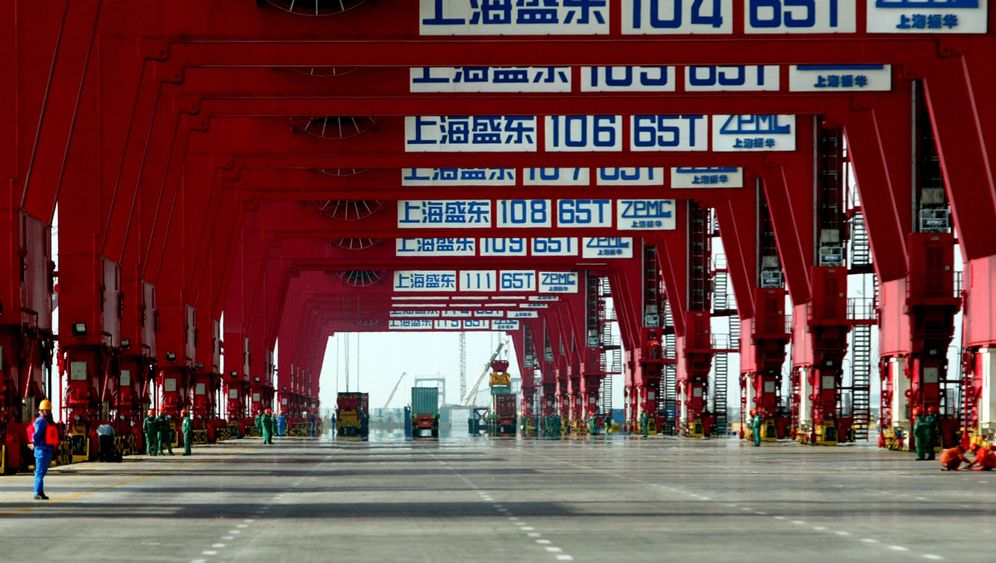 Expo 2010 is underway in Shanghai, and the luxury bars along the Huangpu River are filled with the delegations of Western companies drinking toasts to the new partnerships they have just formed with Chinese companies. In March, this was also where the Chinese adventure of M.C.M., a construction machinery dealer from the southwestern German city of Mannheim, got its start. But now, despite initial high hopes for the deal, the company is struggling to stay afloat.

The head of M.C.M. has spread out a number of photos on a table in his hotel. They are among the few certainties that Mohammad-Reza Mouazzen, 62, can still cling to. One photo depicts a beaming Mouazzen, an Iranian-born German citizen, at a banquet with Chinese businessmen. It was the day after Mouazzen's Chinese business partners, as he believed at the time, had shipped a used mobile crane, for which he had paid €100,000 ($122,000), to Iran, as their contract had stipulated.

Mouazzen has gray hair, wears a dark suit and, as he points out, is not a "baby." For the past 30 years, he has been buying used heavy equipment in countries like Poland and Russia, and then selling it at a profit, often in Iran. It is a tricky business, which is why Mouazzen was careful to cover his bases during his first deal in China. He and his son Omid, 23, documented every step of the process with both photos and videos. One cannot say he behaved naively or negligently in Shanghai.

Nevertheless, the two businessmen were "shanghaied," so to speak, unscrupulously duped in a way Mouazzen has never experienced anywhere else. In early May, after Mouazzen had returned to Mannheim, he received a furious phone call from his client in Iran. Instead of delivering what was expected, a well-maintained crane, made by the Japanese company Kato and freshly overhauled at Mouazzen's behest, the Chinese had shipped a rusty Mitsubishi -- a wreck without an engine or a loading arm, weighing 12,590 kilograms (27,700 lbs.) less than the original crane.

Mouazzen places the photos of both cranes next to each other. He is still in disbelief. The two machines were photographed standing on the same container, which was marked YMLU 700754 6. Mouazzen photographed this number and the crane when it was being loaded in Shanghai. At the time, he and his son remained with the truck carrying the container in the Shanghai customs port until 1 a.m. Only after the truck had taken its place in the long line of other trucks waiting at the harbor did they return to their hotel, satisfied that everything was legitimate.

The container number is listed in the bill of lading. "No one questions what's in the bill of lading," says Mouazzen. "That's how I've worked my entire life." But his Chinese partners, he assumes, must have replaced the heavy container cargo on that same night: a daring logistical feat that they could only have been performed with the help of two large hoisting cranes -- and hardly without accomplices in the Shanghai customs office.

But the dealer from Mannheim noticed nothing that night. In fact, he was overjoyed as he raised a glass to his new business relationship with the Chinese. An enormous market seemed to be opening up for M.C.M., because the majority of used heavy equipment is offered for sale in China, primarily on the Internet. "We Chinese wish to learn from you," the head of the company, which calls itself China Heavy Equipment, vowed solemnly. Mouazzen, who felt flattered at the time, says: "They treated me like a father."

And because everything seemed to be going so perfectly in China, the visitors from Germany agreed to the next deal: the purchase of another used crane, this one made by the Japanese company Tadano, also for shipment to Iran. Mouazzen gave the Chinese a 60-percent down payment for the €110,000 crane, which he characterizes as "a wonderful machine." For another €6,000, the Chinese promised to provide the crane with an air-conditioning system.

But when he returned to Germany, Mouazzen began receiving a flood of e-mails that raised serious doubts. China Heavy claimed that the crane's entire electrical system had burned out during installation of the air-conditioning unit. As the customer, Mouazzen would be responsible for the added costs, China Heavy wrote. The Chinese partners demanded more than $40,000 for the repair and claimed it would take three months. When Mouazzen insisted on inspecting the machine in person, the e-mails became increasingly hostile.

China Heavy eventually sent its German customer a "letter of urgency," in which it stated that if he did not react to the letter within eight hours, it would be "responsible for nothing." But the flight to Shanghai alone would have taken Mouazzen about 11 hours, and besides, most European airports were shut down at the time because of the volcanic ash cloud. The Chinese apparently did not seriously expect that they would ever see their business partner again.

The small Mannheim business, which consists of Mouazzen, his son and three employees, is now struggling to survive. In addition to the money he had already paid for the cranes, Mouazzen owes his Iranian customers a 30 percent contractual penalty for the incorrect shipment. Even worse, says Mouazzen: "My reputation with business partners of many years is ruined."

Now the Mouazzens are back in Shanghai. During their previous visits, they splurged on a suite, but now father and son are saving money by sharing a double bed. And instead of spending their time marveling at the glittering facades of this city of skyscrapers, they are struggling with the harsh realities of everyday business in China.

'Why Don't You Arrest These People?'

The Mouazzens have one of their first appointments with the police. The officers listen patiently to the foreigners' story, but they do not seem surprised. In light of the overwhelming evidence -- the photos of the cranes, the Chinese partners' shipping container, the manifests, the contracts -- the Chinese agree that a "crime" was committed. "Well, then why don't you arrest these people?" Mouazzen asks. The officers reply that they will conduct a thorough investigation of the matter, because their aim is to crack the entire ring of swindlers later on, in one fell swoop.

The Mouazzens spend one day after the next in Shanghai, in much the same way, achieving nothing. Instead, they discover that the crane they had already paid for is apparently being offered for sale on the Internet again.

Every day they spend in Shanghai costs them a lot of money. Their Chinese attorney alone charges €250 an hour. And with each passing day in China, Mouazzen loses potential contracts that his company urgently needs.

In their desperation, the Mouazzens begin conducting their own investigations. They discover, for example, that the address of their Chinese "partners" listed in the contract is incorrect. Suddenly no one is answering any of the mobile phone numbers the Mouazzens were given, and the interpreter, who attended every meeting, is supposedly in the hospital. The shipping agent who transported the crane to the port starts shouting at the Mouazzens when he sees them approaching from a distance. He claims that neither the truck nor its driver belonged to his company.

Finally, on the fifth day of their stay, the Mouazzens are sitting across the table from a representative of China Heavy. The meeting, held in their lawyer's office, is a perfect example of the Chinese art of wearing down negotiating partners. The head of China Heavy has sent an assistant, the same person who had signed the contracts. But the attorney for the Chinese company controls much of the conversation. His name is Tony Hang, he is wearing black glasses, and he behaves boldly, as if he were the prosecutor in this case.

'Do Not Call Us Cheaters!'

When the Mouazzens present their photos, Hang pushes them aside, saying that they are not evidence. Nevertheless, he says he would like photocopies, a request the Mouazzens deny. Then Hang launches into a debate over the model name of one of the cranes, which is different in China than it is in Japan. Finally, he pulls out the "letter of urgency" and says that his client had demanded that Mouazzen appear in Shanghai within eight hours. "But you didn't show up!" he shouts.

The air becomes more and more stifling in the conference room, and Mouazzen begins breathing heavily. When his son berates the opposing party as "cheaters," Hang shouts: "You do not call us cheaters! You are cheaters!" The representative of China Heavy looks on silently.

Mouazzen silences his son with a wave of his hand. There are beads of sweat on his forehead, his eyes are moist, and he still hopes that he can appeal to the Chinese on a human level. "Why did you do this to me, after I had brought so much money to China?" he asks quietly. "And why do you defend such people?" he asks the attorney. "You only harm your country by doing so."

The parties eventually go their separate ways. The Mouazzens' attorney, a young man who said very little during the meeting, smiles encouragingly at his clients and says that the opposing party will undoubtedly get back to him soon. Mouazzen has already heard many variations on the same theme in Shanghai.

When the police fail to pursue his case, Mouazzen takes matters into his own hands and searches for his crane in Shanghai, which, as he has already discovered, is once again for sale online. He watches as the crane is loaded onto a truck. Then he instructs his attorney to ask the police to intervene. But the police refuse, claiming that the officer assigned to the case is now on vacation and that nothing can be done about the matter at the moment.

"What kind of a city is this," Mouazzen asks, "where swindlers are simply allowed to go about their business?" 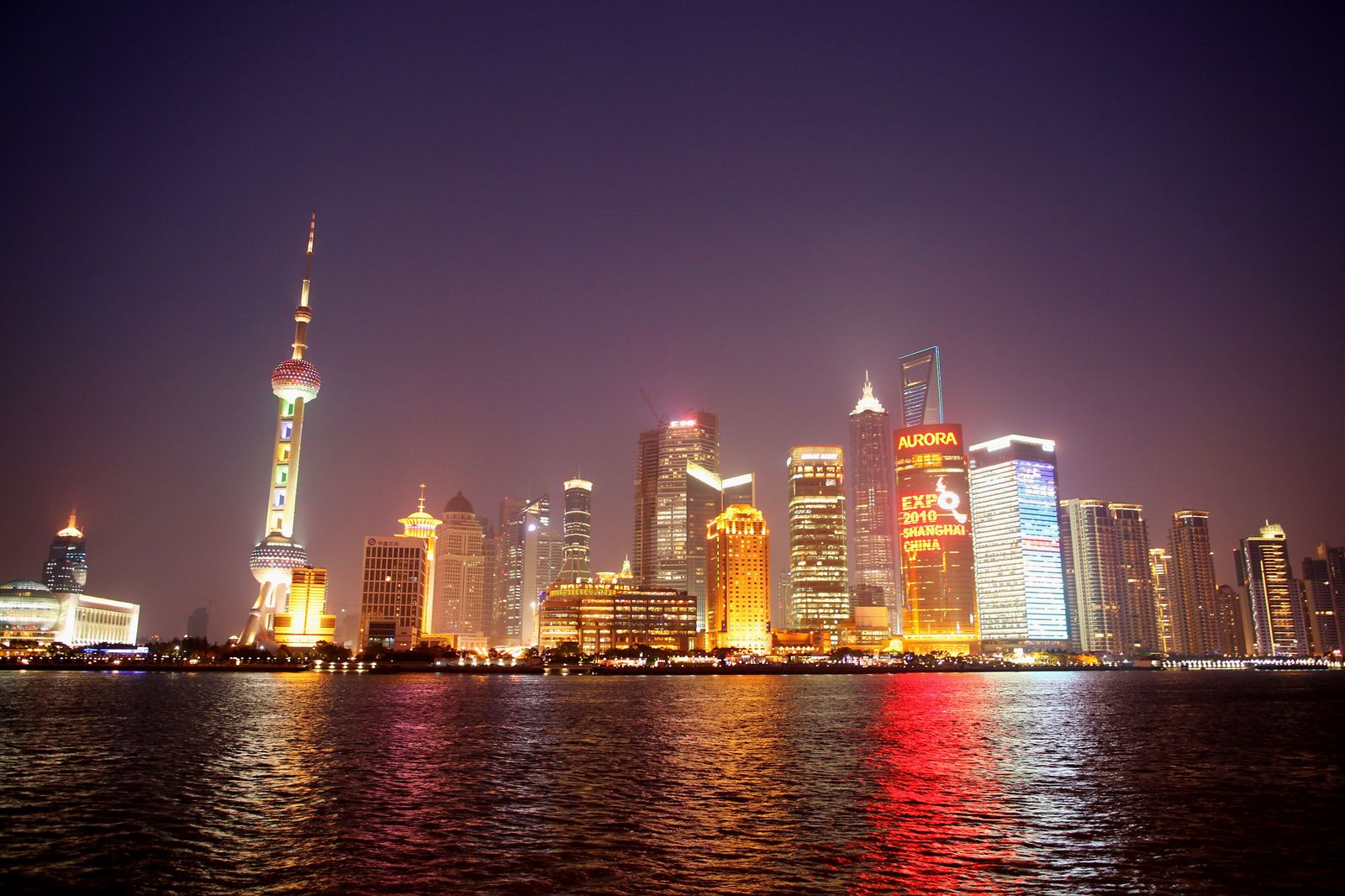 Shanghai, host of this year's World Expo, boasts a new financial district after being spruced up for the big event. Doing business in the city, however, is not always easy.