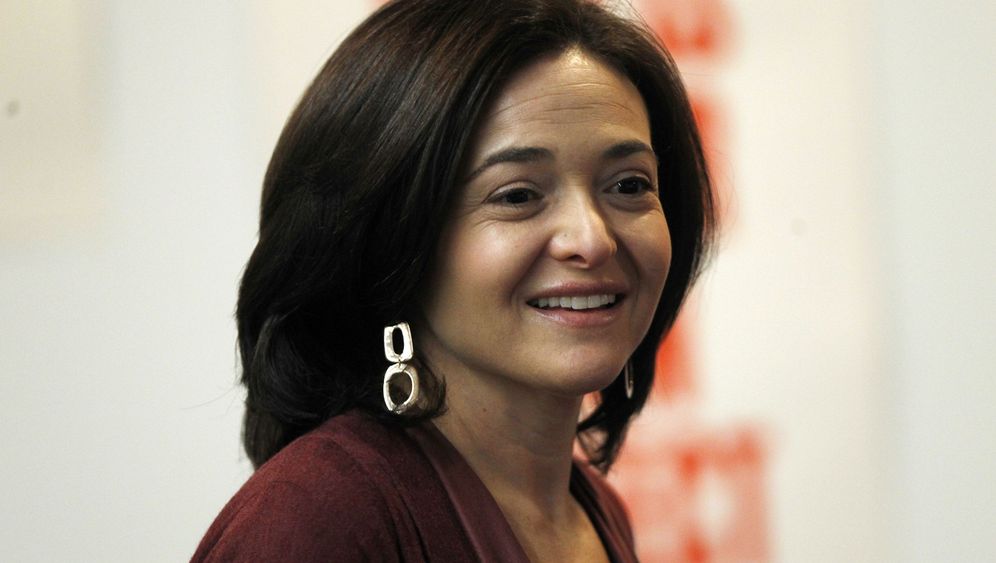 The episode with the ladies' room must have been truly unsettling to Sheryl Sandberg, because she mentions it in the first few pages of her new book. It happened in a conference room in New York, in one of those movie-set offices with a 360-degree view of Manhattan.

Sandberg had been named chief operating officer of Facebook two years earlier, and now she and her team were giving a presentation to a private equity firm -- at a conference table surrounded by men.

When the presentation was interrupted for a break after two hours, Sandberg asked where the ladies' room was. The firm's senior partner turned around and offered a blank stare. Stumped by the question, he said he didn't know where it was located. The company had moved into the offices a year earlier.

"Am I the only woman to have pitched a deal here in an entire year?" Sandberg asked.

"I think so," the client replied, adding, "or maybe you're the only one who had to use the bathroom."

Sandberg, 43, is the mother of two children, one of the richest women in the world, a Harvard graduate, a former economist at the World Bank and later chief of staff for the United States Treasury Department and a vice president at Google. She has written down this story, like many others from her professional life, in "Lean In: Women, Work and the Will To Lead," a book to be published in the United States next week.

'Our Revolution Has Stalled'

She relates the story as evidence of the fact that the world still isn't the way she would like it to be, even 50 years after American feminist icon Betty Friedan made her famous plea for a woman's right to work. "It is time for us to face the fact that our revolution has stalled," Sandberg writes, noting that there are still myriad barriers and glass ceilings.

Sandberg is the kind of woman who likes to tell people that, when she was still nursing her daughter, she used to run an electric breast milk pump during conference calls at Facebook. If anyone asked about the strange noise on the line, she would say that a fire truck was driving by outside. Later, she decided to leave work at 5:30 p.m. each day so that she could eat dinner with her children. At first she left the office secretly, but then she did it publicly, and in doing so she did a lot of women a big favor. And although it's easier for a person at the top to leave work early or interrupt her workday so that she could finish her work in the evening at home, Sandberg still set standards by demonstrating that it was feasible -- even at the very top.

The next step in her campaign is a book that is being launched in a style befitting one of the Harry Potter books: with a party attended by New York Mayor Michael Bloomberg, an exclusive 60-minute interview on CBS and a 40-page special in Cosmopolitan.

In her book, Sandberg quotes dozens of statistics and studies that document the plight of women in numbers. She writes, for example, that mothers who stay at home for a year because of a child see an average 20-percent drop in their salaries. Professional women spent twice as much time as their partners doing housework at home, and three times as much time taking care of children.

'We Hold Ourselves Back'

None of this new, but what is original is Sandberg's answer to the question of why, in 2013, she remains one of the few powerful women in the American economy, an exception to the rule, in 10th place on the Forbes list of "The World's 100 Most Powerful Women," with an annual income of close to $31 million (€24 million).

It has to do with women themselves, she says. "We hold ourselves back in ways both big and small, by lacking self-confidence, by not raising our hands, and by pulling back when we should be leaning in," she writes. "We internalize the negative messages we get throughout our lives -- the messages that say it's wrong to be outspoken, aggressive, more powerful than men. We lower our own expectations of what we can achieve. We continue to do the majority of the housework and child care. We compromise our own career goals to make room for partners and children who may not even exist yet."

This can't sit well with all those women whose approach to feminism has always meant holding men -- husbands, politicians, bosses -- responsible for the impasse. And there are many of them.

Criticism from all Quarters

Even before its release, the book is being berated from all sides. American newspapers promptly condemned Sandberg's criticism as an elitist and naïve way of looking at things. It isn't appropriate, Jodi Kantor writes in the New York Times, for Sandberg, as the owner of two large stock packages from Google and Facebook, as well as a 9,000-square-foot house with a small army of household help, to simply urge less fortunate women to work harder.

Author Joanne Bamberger even believes that the country is in for a new "Mommy War." While Yahoo CEO Marissa Mayer is just reintroducing the culture of being present in the office and getting rid of the home office, thereby placing women at a disadvantage once again, Sandberg is invoking feelings of guilt among America's women: guilt for not acting with greater ambition, guilt that gets passed on to "working women who are trying to keep work and family in some sort of balance." She sees Sandberg's ideas as a step back for working mothers, not as progress.

Is this true? Is Sandberg betraying the ideals of her champions? How so?

For years, Sandberg has made the problems of women in leadership positions her issue, because she believes that she knows something about them -- and because she has experienced all too often that women are not advancing professionally, even though they could. She also thinks it is no longer acceptable that only 21 of the heads of the Fortune 500 companies are women.

This debate is by default elitist, because it affects only a small number of women: those capable of rising to top corporate positions. But this doesn't make the debate any less important. Not every woman strives to achieve management positions. Other life decisions are also legitimate, as Sandberg repeatedly concedes. For everyone else, the tome contains many small truths and makes demands with which women can identify, regardless of their annual salary.

Sandberg describes, for example, how women are still constantly underestimating themselves, don't sit down at the conference and shout "present," while the boys, not beset by doubts, clamor for new tasks, projects and positions. She wants women to finally shed the belief that as long as they do their work, someone will eventually stop by and place a crown on their heads. She warns women who want children against preventatively placing themselves on the reserve bench, just because they will eventually have to reconcile children and a career.

She also describes the many "internal barriers," gender-specific and acquired stereotypes, that have to be overcome and with which she too has struggled. Sandberg writes that it was only after her brother-in-law urged her to negotiate like a man for once, that she rejected the first offer she was given to join Facebook.

Women are constantly fighting against resistance, as she writes: "Imagine that a career is like a marathon ... a marathon where both men and women arrive at the starting line equally fit and trained. The gun goes off. The men and women run side-by-side. The male marathoners are routinely cheered on: 'Looking strong! On your way!'"

The female runners hear something different: "'You know you don't have to do this!" the crowd shouts. The episode ends with the question of why the women are running at all when their children need them at home.

It's yet another moment of truth.

The book is only the beginning of a large campaign. The next step will consist of "Lean In Circles," small clubs in which women seeking leadership positions meet once a month, educate themselves and learn the secrets of effective management. Sandberg wants to create a global community with the goal of encouraging women to be ambitious and "lean in."

Sandberg dreams of creating a social movement. The will behind it is both feministic and thoroughly politically correct. "We need more women in power," she says. "Only when the leadership demands different policies will anything change." One couldn't be more suspicious of men.