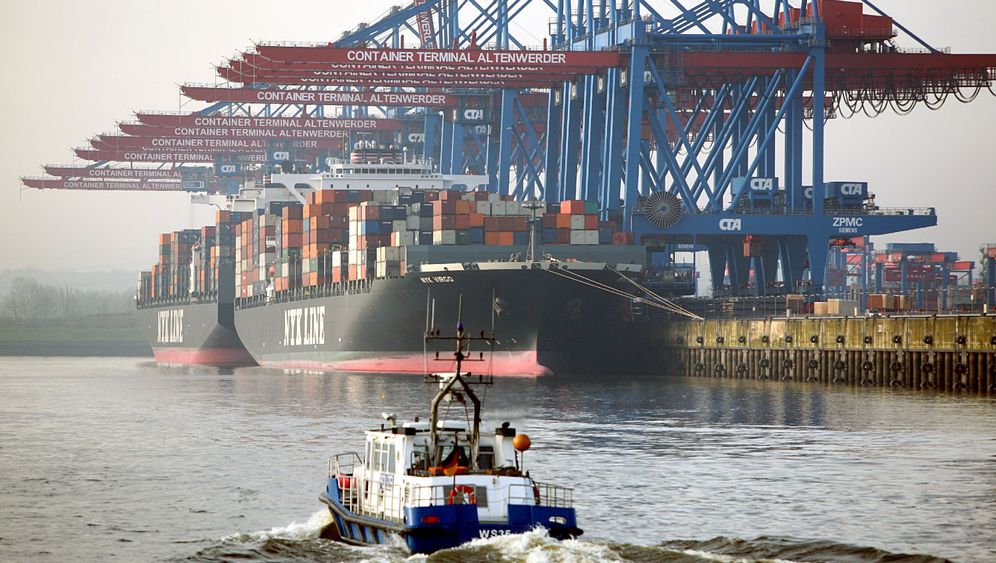 In the evening, when the at-times inhospitable northern German weather allows it, Klaus-Dieter Peters swaps his suit and tie for casual clothes and rides his bicycle from his home in the upmarket Hamburg neighborhood of Othmarschen to the beach along the edge of the city's Elbe River. There, the 57-year-old executive, who is the CEO of Hamburg Harbor and Logistics AG (HHLA), sits on the sand and enjoys a beer and a cigar. And he watches the Burchardkai container terminal on the other side of river, one of the three container terminals that HHLA operates in the Port of Hamburg.

For months, the scene resembled a still life with cranes. The container cranes' arms were raised into the sky, as if they had capitulated in the face of the economic downturn. Occasionally, but only occasionally, a ship passed by the bleak silhouette of the terminal. The port, which usually buzzes with life around the clock, was almost silent.

Last year, Hamburg's dream of an eternal boom and its ambitions to become Europe's top logistical hub seemed to have come to an end. The port's container throughput fell by 28 percent in 2009 as a result of the economic crisis. In the competition to be Europe's most important container port, Hamburg lagged in third place behind Rotterdam and Antwerp. And in the global league tables, the German port found itself in the no-man's-land of the middle rankings -- a place which did not correspond to the self-image of the proud Hanseatic city.

The Red Blood Cells of Globalization

After a decade of euphoric growth, the crash hit HHLA, Hamburg's largest terminal operator -- which is also owned by the city -- particularly hard. "For us, 2009 was a bad year of unprecedented proportions," Peters says. But he emphasizes that that unpleasant chapter is now over. "In the last couple of months things have been taking off again," he adds quickly. Indeed, the numbers are looking up. The container throughput in the Port of Hamburg increased by 4 percent in the first half of 2010, while HHLA's terminals even saw throughput rise by nearly 9 percent.

Ever since the low point of the global crisis passed, the economic recovery has been felt with full force in ports all around the world. Containers are the red blood cells of globalization, carrying oxygen around the global economy. Most of the goods being moved in international trade are transported in containers, which are generally 12 meters (40 feet) long and 2.4 meters (8 feet) in width and height. They hold everything from Australian wine to Chinese-made PlayStations to German wind turbines.

According to one rule of thumb, when the global economy grows by 1 percent, container traffic increases by 2.5 percent. That increase is being felt in Hamburg, which is by far Germany's most important port. HHLA CEO Peters can observe the renaissance of his business empire in the evenings, when he watches the harbor from the other side of the Elbe. He can also see it in his company's flagship project, the Altenwerder container terminal, which is buzzing once again.

Carsten Pohl, 36, who works as a vessel planner in Altenwerder, has also noticed the upturn. His job is to make sure that the giant container ships that moor in Altenwerder, one of the world's most efficient container hubs, are optimally loaded. The ships tend to call at several European ports as part of their route between, say, Asia and Europe, and are therefore not completely loaded or unloaded in Hamburg.

Back in 2008, Pohl had 19 colleagues, all working to make sure the containers found their proper place, and working overtime was common. Last year, there were far fewer people, and none of them worked longer than their regular hours. HHLA even put some 2,000 of its 5,000 employees onto a government "short time" working program, whereby they worked shorter hours and the state made up for part of their lost wages in benefit payments. Nowadays, the number of vessel planners working in Altenwerder is almost back up to its pre-crisis level, and only a few HHLA employees are still on short time.

"Admittedly, things are still not quite as busy as before the crisis, but it's picking up more and more," says Pohl. The view from his office is enough to show that's true. Up to four giant container ships of the latest generation can moor along the 1.4 kilometer-long (0.9 miles) quay wall at the same time, and more than 30,000 containers can be stored at the terminal.

For a long time, the container terminal looked pretty empty. Now, tens of thousands of containers are stacked up again in endless rows, waiting for their onward journey by smaller ship, truck or train. About one-third of the goods that arrive here have the Hamburg area as their destination, one-third go on to other German and Eastern European destinations and the other third are bound for ports in the Baltic Sea.

The rebirth of the port is also noticeable elsewhere. A few weeks ago the large container shipping companies CMA-CGM and Maersk began operating a new service between Asia and Hamburg. As part of that service, the companies are sending the largest ships that are currently available to Hamburg's port. These mega-freighters can hold up to 14,000 containers. It takes 8,000 trucks to transport the goods from a single ship.

While HHLA is naturally pleased to be handling the prestigious new service, the trend toward larger vessels also poses challenges for Hamburg. For ports, accessibility is key, both by sea and by land. While the expansion of roads and rails usually fails because of lack of money, the Elbe River also poses natural limits. Although the river will be deepened by 1 meter in 2011 so that it can handle vessels with a draft of up to 14.5 meters (47.57 feet), it is doubtful whether the river will be deepened further in the future. Next year's deepening comes after a bitter years-long conflict over the project, which was opposed by environmentalists.

And so it's looking likely that, in the future, it will be shipbuilders, rather than fluctuations in the economy, that will determine how things go with Hamburg's port. At the end of the 1990s, a ship that had a draft of 14 meters and which could hold 8,000 containers was still seen as something of a sensation. These days, cargo ships are being designed that have a draft of more than 16 meters and a capacity of up to 15,000 containers.

"Hamburg can take solace in the fact that it makes little economic sense to keep building ever-larger ships with ever-bigger drafts," says Burkhard Lemper from the Institute of Shipping Economics and Logistics in Bremen. Other industry experts, however, are pessimistic about the city's prospects. "Because the ships keep getting larger, Hamburg faces the threat of being demoted to a regional port in the medium term," says a source at one Hamburg-based shipping company, who preferred to remain anonymous.

No matter how big the ships of the future might be, the days of the "bigger is better" euphoria in Hamburg seem finally to be at an end. A few years ago, it was still all about expanding the harbor as fast as possible and the question of how the port would cope with a permanent two-digit growth rate. Nowadays, nobody worries any more about future congestion problems at the port's terminals.

The pre-crisis target of a throughput of 10 million containers, which Hamburg once expected to see in 2009, is still a few years away. According to current estimates, the annual number of standard containers passing through the port in 2020 will be more like 15 million than the once-estimated 25 million. If the currently existing facilities were expanded to maximum capacity, the port could easily handle more than 20 million containers a year. Hence it will be some time before an expansion of the harbor is necessary. 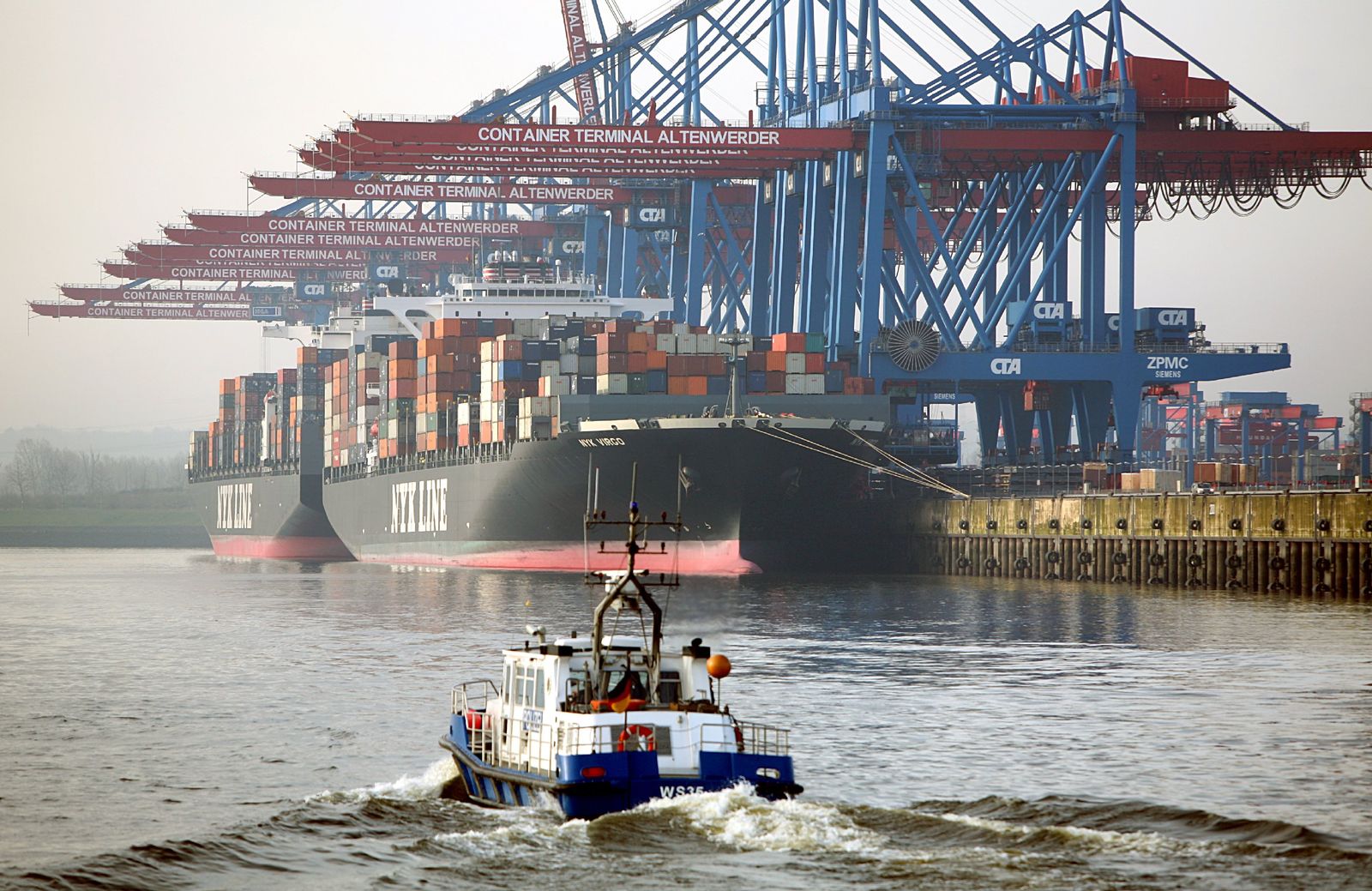 The economic crisis turned Hamburg's port into a ghost town. Now that things are picking up, the container terminals at Germany's most important shipping hub are buzzing with life again. 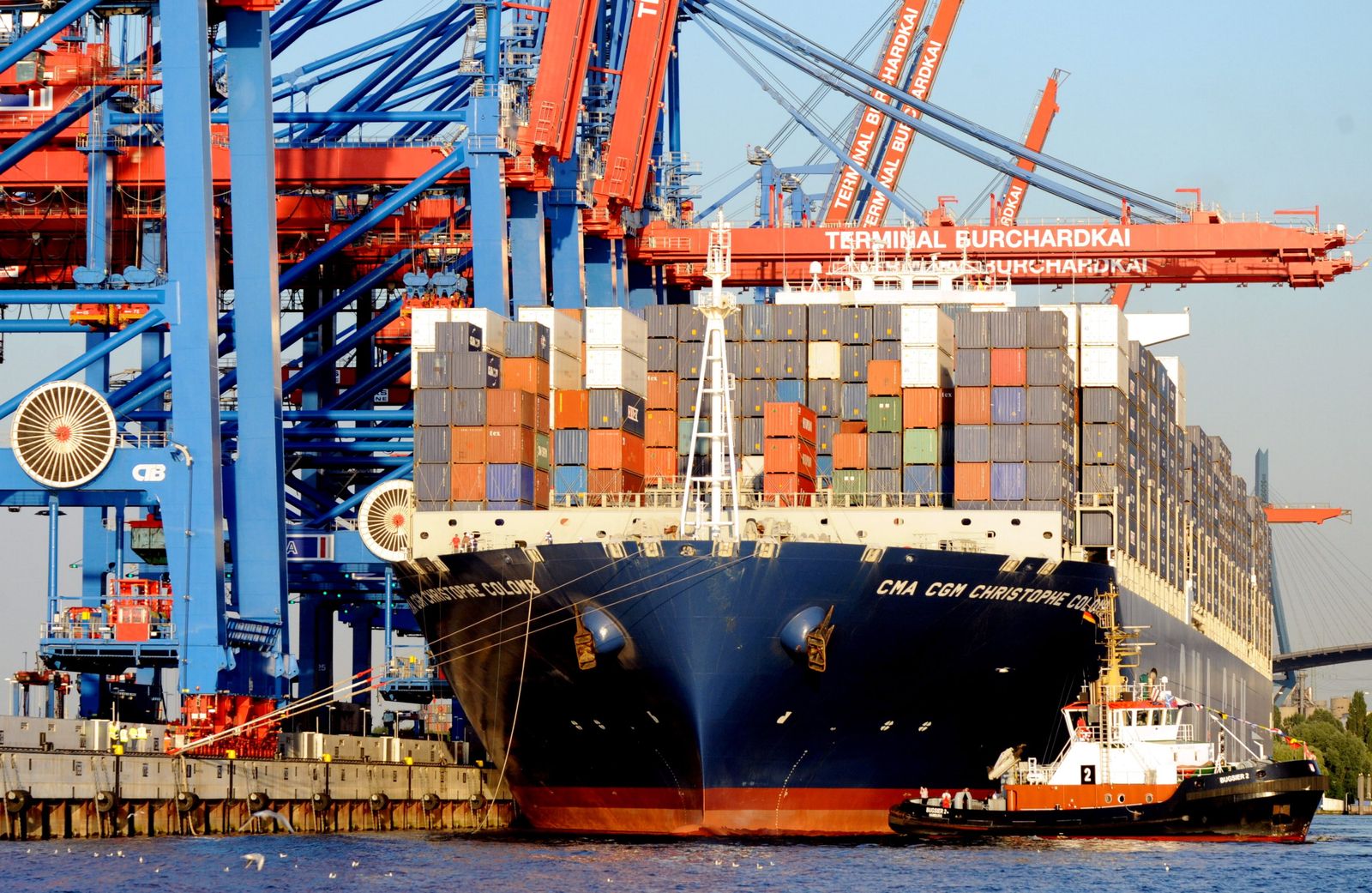 The CMA CGM Christoph Colomb visited Hamburg in July 2010, the largest container ship that the port had ever seen. 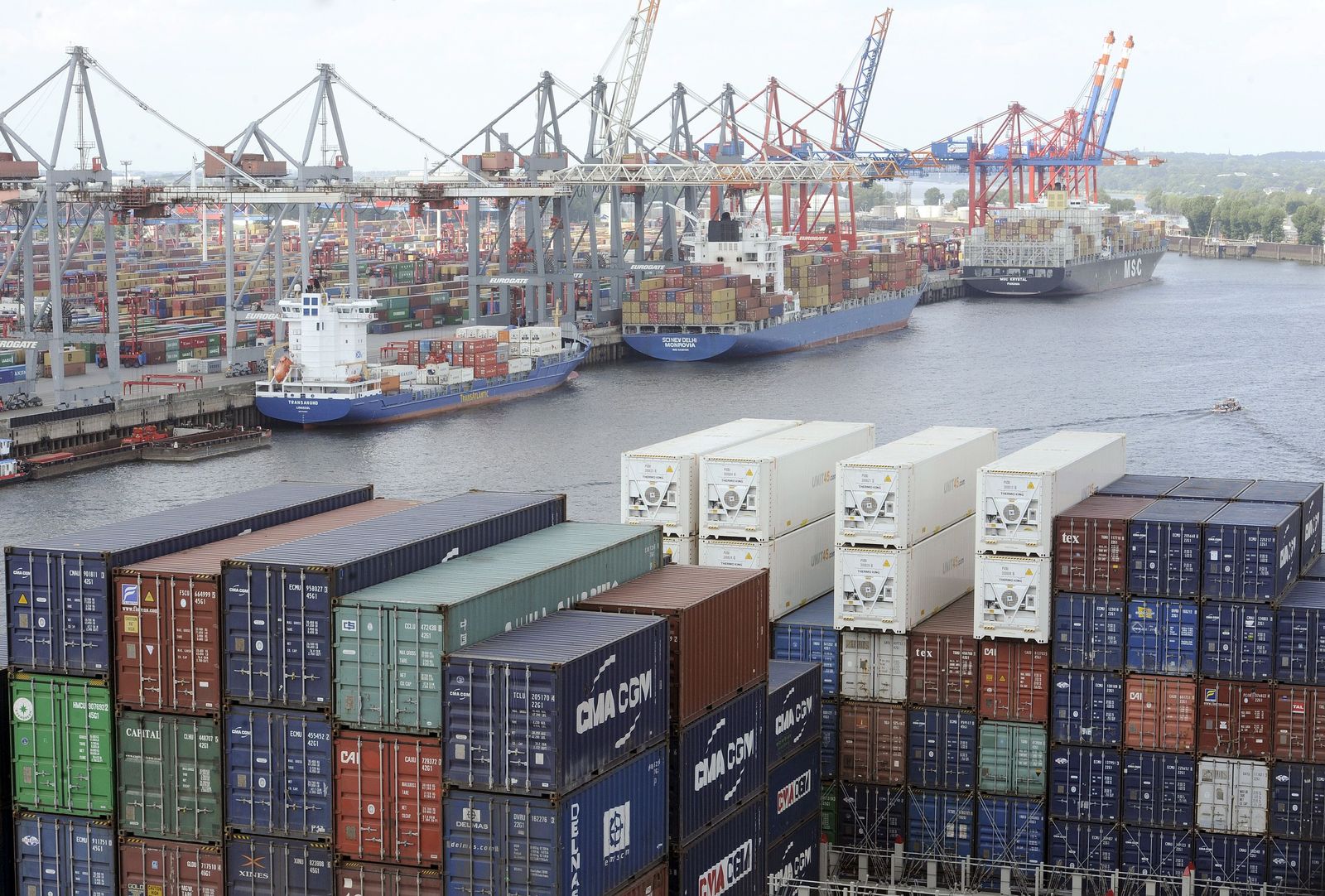 For a long time during the economic crisis, the container terminals in Hamburg looked pretty empty. Now, tens of thousands of containers are stacked up again in endless rows, waiting for their onward journey. 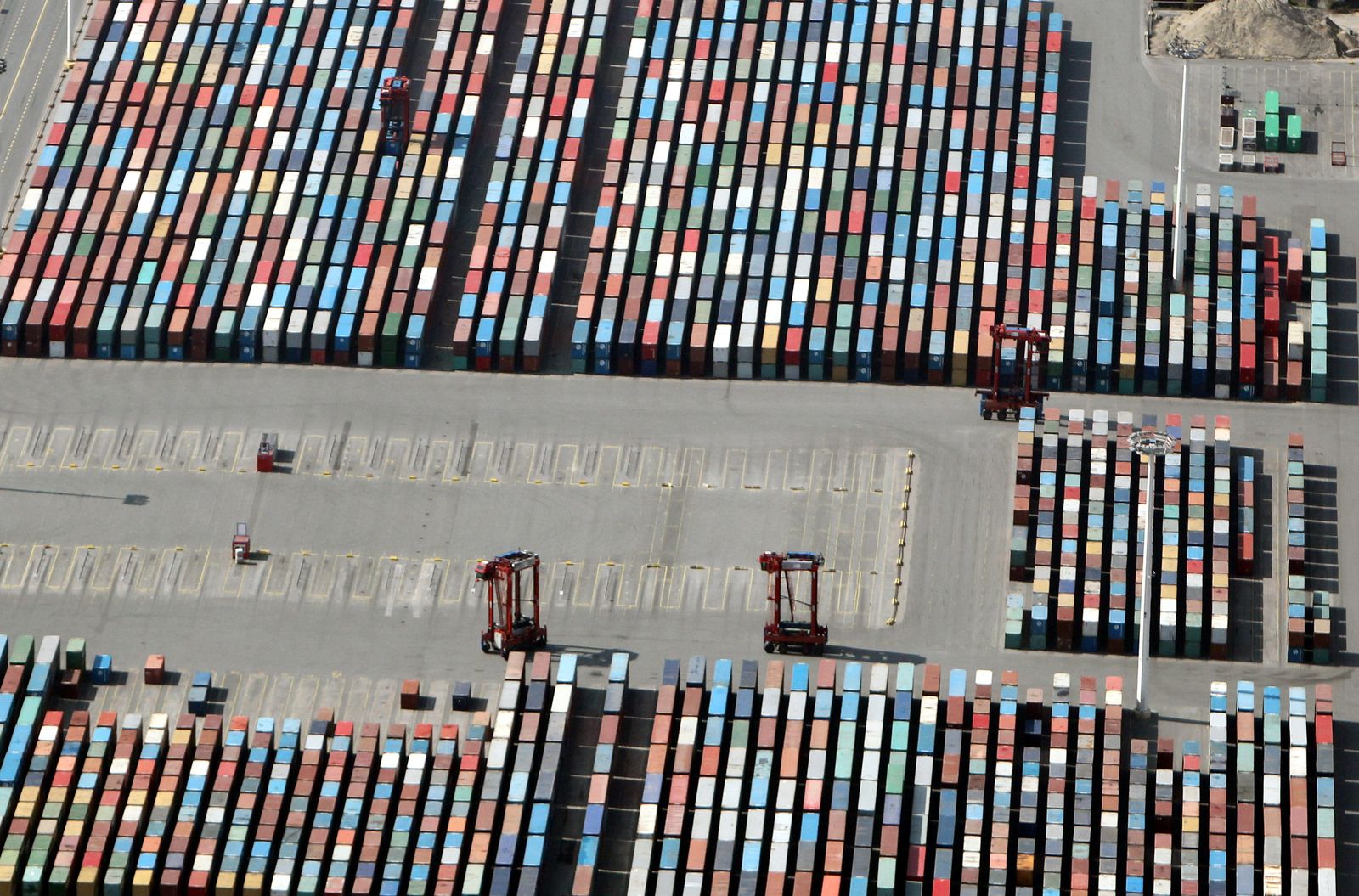 Containers in the Eurogate terminal: Most of the goods being moved in international trade are transported in containers. 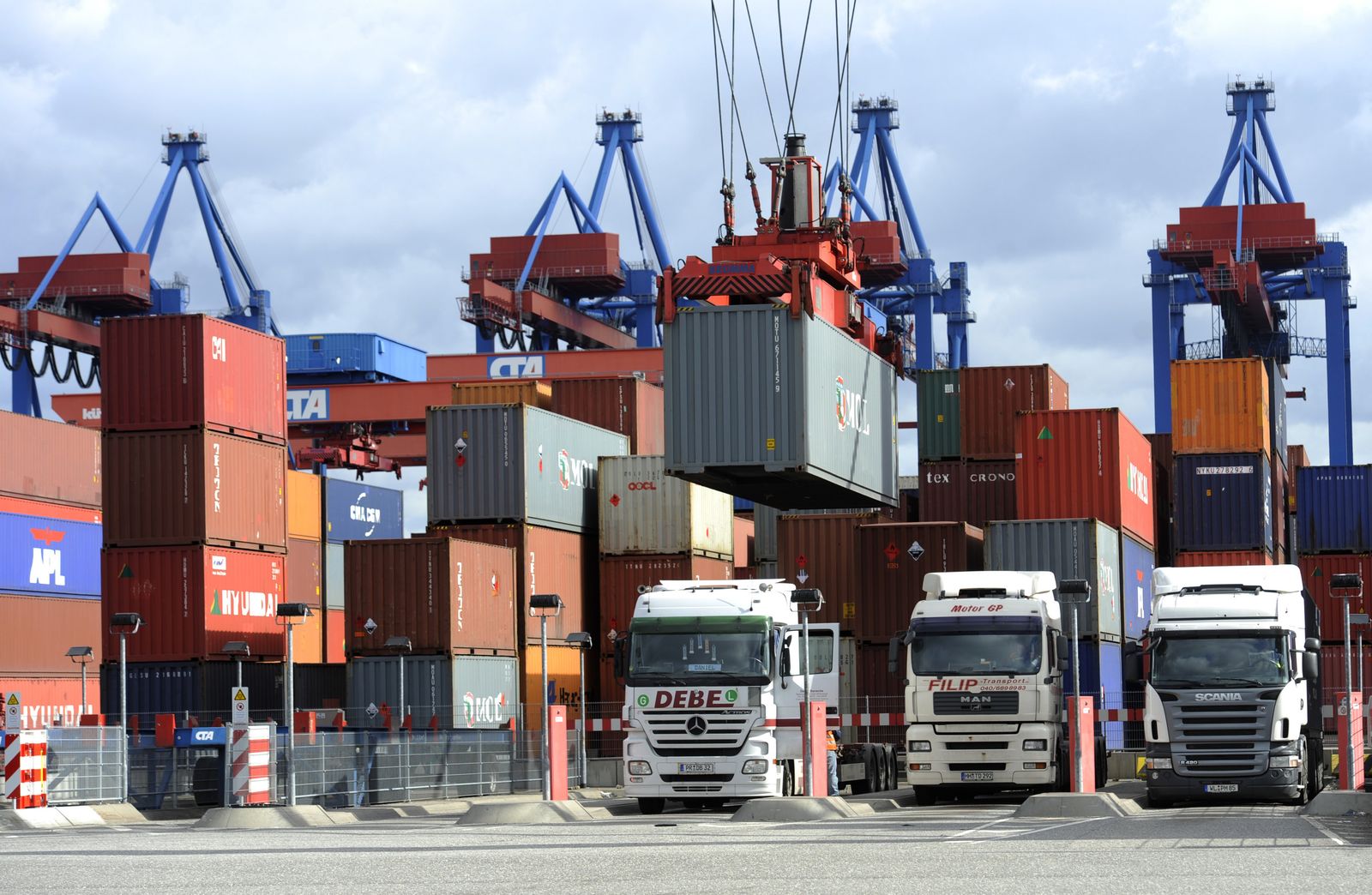 The containers continue by smaller ship, truck or train.