SPIEGEL ONLINE: Everyone in the tech world seems to be talking about Berlin right now. People say it's the Silicon Valley of Europe and more and more investors are also beginning to take notice. What's fuelling the hype?

Niklas Zennström: I think there are a few reasons. Berlin is perceived as a cool city for tech people, perhaps because it is more of a culture city than a financial one, and that makes it more interesting for entrepreneurs. It is also much easier to find a place to live than elsewhere and it is certainly cheaper to find office space. That is very much a driving factor.

SPIEGEL ONLINE: Certainly there are several other cities in Europe that fulfill those criteria, Lisbon and Barcelona to name just a couple.

Zennström: Berlin is approaching critical mass at the moment. People hear that stuff is happening in Berlin and that attracts them to move there and all of a sudden you end up with a vibrant scene. Plus, you have the Technical University of Berlin doing a fantastic job encouraging entrepreneurs and promoting computer science, which means that start-ups have access to talent. That creates a virtuous circle.

SPIEGEL ONLINE: Do hubs really matter? If one looks at a map of exciting start-ups in Europe, it is clear that there are great companies all over the place. Everyone is talking about cloud computing. Can you have a cloud start-up ecosystem as well?

Zennström: Berlin is certainly one of the hottest places for start-up companies. But you can start great companies everywhere. If you go back to the 1970s, during the creation of Silicon Valley, you needed to have a place. You had companies like Xerox and HP and others that were the pioneers, and you needed to be in one place because there was no other way to exchange ideas. Today, a lot of that is happening online and you don't really need to be in one of these geographical ecosystems because it's in the cloud, its virtual. People all around the world have access to the same information. You don't need to be in one of these hubs at all to be successful.

SPIEGEL ONLINE: Despite the emergence of the cloud, entrepreneurs are still excited about Berlin. They aren't alone, either -- a number of investors are also focusing on the tech scene in the German capital.

Zennström: That is true. In fact, many are also looking into setting up offices in the city. But like I said, it is easy these days to see what is bubbling online and then get on a plane and travel there. In the old days, venture capital firms had an office in a city and they invested in companies all around that city. Today, that is changing a lot. Now, funds like ours have a much broader geographical scope. Talented people are not born in a cluster. Some companies make the decision early on to relocate to a tech hub. But many do not.

SPIEGEL ONLINE: Even if, as you say, funds don't necessarily have to be local, many have complained over the years that Europeans generally and Germans more specifically have been overly wary of investing in start-ups or in venture capital funds. Could that pose a problem to the Berlin ecosystem in the future?

Zennström: That is something that has been a problem for many, many years -- and it is also one of the reasons I started Atomico in 2005. I thought there was very clearly a need in Europe for successful entrepreneurs to go back and invest in the next generation. Its hard for investors who have never built a business before -- those who come from a financial or consultancy background, for example -- to really understand the ins and outs of a start-up company. That's historically been a problem in Europe, and not specifically in Berlin or Germany.

SPIEGEL ONLINE: What can be done about it?

Zennström: The good news is that it's getting better and better. There are now many entrepreneurs in Germany and elsewhere who are going back to invest in up-and-coming entrepreneurs.

SPIEGEL ONLINE: How important is that kind of investing for a tech hub?

Zennström: It is a vital part of the ecosystem. You need to have generations of entrepreneurs. For example, there are a lot of people who worked for me at Skype who left to start their own companies. You end up with entrepreneurs who become investors and people working for start-up companies who become entrepreneurs themselves.

SPIEGEL ONLINE: It sounds very organic. Is there a possibility that, even as Berlin is rapidly developing at the moment, the stumbling European economy could put a damper on things?

Zennström: Tech companies like the ones we are talking about are pretty immune to the macro-economic situation. They are governed by a couple of things, and one of those is access to capital. But venture capital funds don't all of a sudden pay back their money to investors when there is a crisis; their funds typically run for several years. The other issue they have to deal with is consumer buying power. But many online services are extremely cost efficient for consumers. Take Skype, for example. If you want to communicate with people and you don't have much money, Skype is a good way to do it. It's free. A lot of online services like that are almost counter-cyclical in terms of growth.

SPIEGEL ONLINE: So you think there is no reason that the Berlin tech scene won't continue to grow?

Zennström: I certainly don't see any reason why it would shrink. I think there will be more and more companies coming out of Berlin and that in five years there will be at least one company that will have become a huge success. Right now, there are many great companies in the city. There is absolutely no reason that a company like Skype couldn't come out of Berlin. 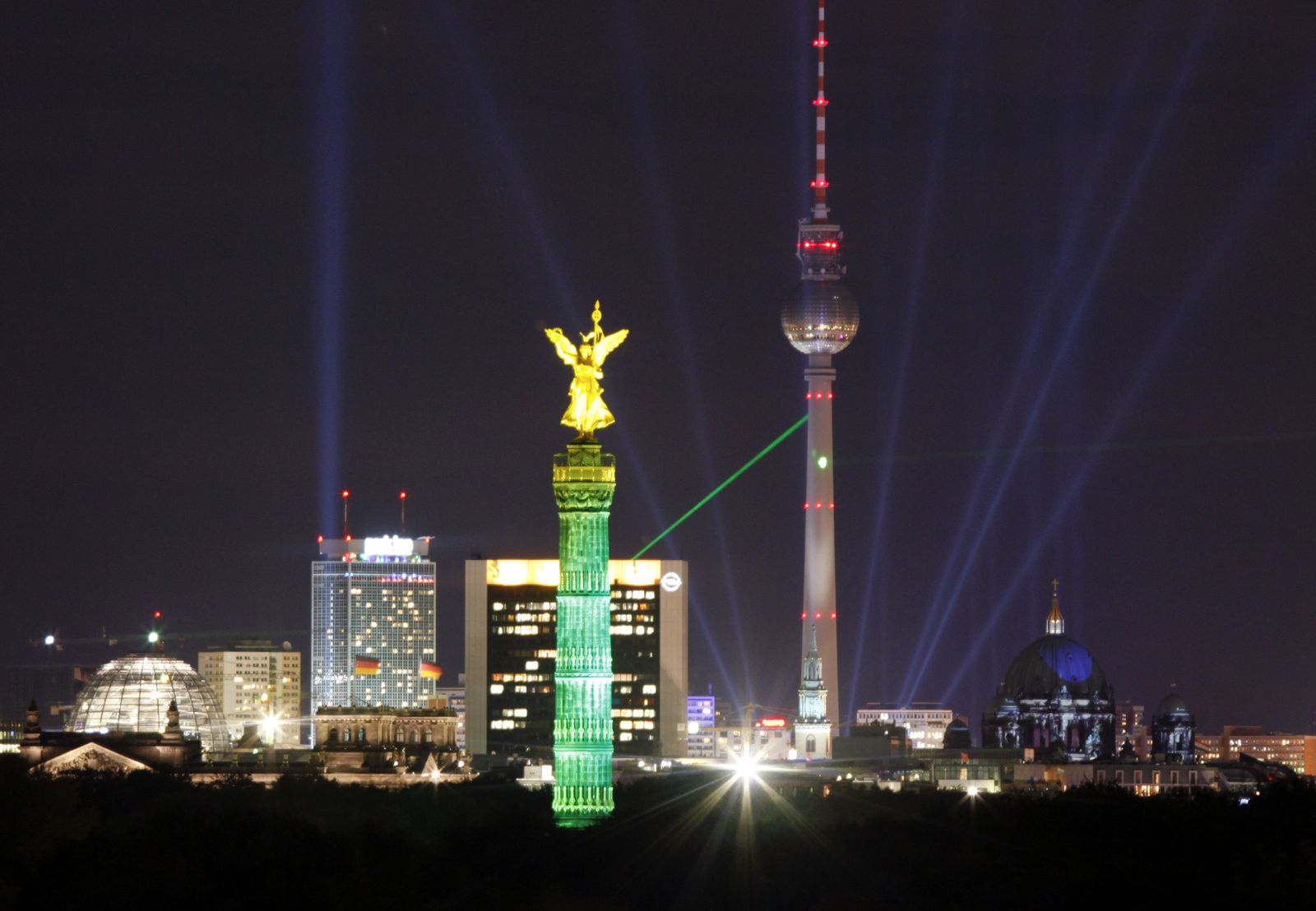 The illuminated Berlin skyline: "Berlin is perceived as a cool city for tech people."