An investigation commissioned by Deutsche Bank has revealed that Germany's largest bank spied on several of its management board members, supervisory board members and on at least one shareholder. The 150-page report was prepared by legal firm Cleary Gottlieb Steen & Hamilton. 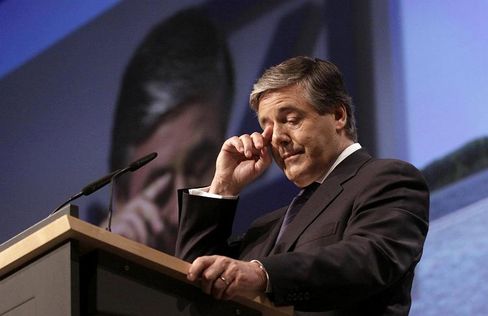 Deutsche Bank CEO Josef Ackermann has been presiding over an internal investigation into a snooping scandal at his bank.

Like Deutsche Telekom and Deutsche Bahn, which have also been hit by internal snooping scandals, it seems that Deutsche Bank also succumbed to a mixture of paranoia and megalomania.

Leading executives at the bank hired external "specialists" to solve their security problems -- some of them real, some of them imagined -- and those specialists in some cases resorted to dubious methods.

Chief Executive Josef Ackermann has ordered an investigation but the bank faces a major conflict of interest in the form of supervisory board chairman Clemens Borsig, who shares responsibility for at least some of the snooping operations.

As chief financial officer between 2001 and 2006, he was in charge of the corporate security department that is now at the center of the scandal. Many of the spying operations that have come to light happened during that time.

Gerald Herrmann, an official from the Ver.di services union who had a seat on Deutsche Bank's supervisory board at the time, was suspected in 2001 of having leaked the bank's third-quarter results to the Reuters news agency. The Corporate Security department reacted by hiring external detectives to monitor him.

At first the bank had only admitted comparing travel data such as hotel stays to establish a link between Herrmann and a Reuters reporter. But it's now clear that the snooping operations went much further in some cases.

There were also investigations into members of the bank's management board that could only really have been ordered by Borsig or Ackermann. In 2006 the internal security department received the delicate order to check contacts between board members and Munich-based media magnate Leo Kirch and his associates.

External detective agency Bühner Private Risk Advisors was commissioned with the task. But the head of the agency, Bernd Bühner, denies this. He said he was at no point ordered to spy on Deutsche Bank management or supervisory board members.

The operation was in response to legal action brought by Kirch, who blamed former Deutsche Bank CEO Rolf Breuer for the collapse of his company. Kirch's lawyers had managed to obtain sensitive information from within Deutsche Bank's management.

The bank also had external helpers investigate a shareholder believed to have links with Kirch -- Michael Bohndorf, a lawyer who resides on the island of Ibiza. The investigators compiled detailed reports on his movements and even looked into whether he had any personal weaknesses: alcohol, gambling, women? One insider reports that the agency resorted to hiring women to test him.

For years, Bohndorf has been annoying Deutsche Bank by asking dozens of questions at annual shareholder meetings and taking legal action if his questions aren't answered. The bank has already informed Bohndorf of the spying operation and apologized for it. Bohndorf couldn't be reached by SPIEGEL last week by the time the current issue went to press.

Data protection officials in the western state of Hesse, the Federal Financial Supervisory Authority (BaFin) and possibly even the public prosecutor's office in Frankfurt will now have to check whether any laws were broken in the snooping operations.

Many members of Deutsche Bank's supervisory board have little doubt that laws were broken. And they're particularly worried about the Michael Bohndorf case. The litigious shareholder has proved that he doesn't shy away from suing the company.