Khadem al-Qubaisi really likes Mercedes. "I drive an SLR, and most of my other cars are also made by Daimler. Apart from a few BMWs and Porsche," said the chairman of investment company Aabar, which belings to the emirate of Abu Dhabi. That's part of the reason why his fund has just purchased a 9.1 percent stake in the Stuttgart-based automaker, he added. 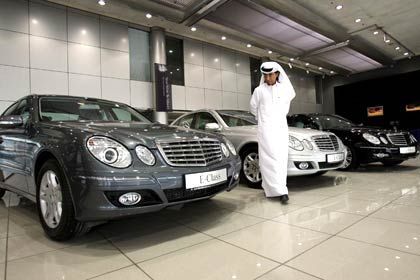 Al-Qubaisi and Daimler CEO Dieter Zetsche were in high spirits as they explained the deal to the world at a news conference on Monday morning. The head of Aabar justified the investment by citing soft arguments rather than hard figures. Germany's car industry was fascinating, he said, and Daimler had an investment style that he liked. But he left no doubt that other industries had potential too, especially in Germany. "There are good companies, good technology and good managers here," said al-Qubaisi.

It's a view shared by many sovereign funds in the Middle East, and there are strong signs that Arab investors will become increasingly active in Germany and Central Europe in the near future. Despite the financial crisis, they have ample cash. Besides, the stock value of major companies has nosedived and governments are so busy trying to rescue their economies that their resistance to supposedly dangerous foreign investors has evaporated.

"Daimler is a signal," said Professor Christoph Schalast, a mergers and acquisitions analyst at the Frankfurt School of Finance. "There will be more direct investments." Investors won't just target blue-chip companies listed in the DAX stock market index, he said. "Sovereign funds are also increasingly interested in companies in the MDAX (the index of 50 stocks with lower market value than the DAX stocks) and in unlisted companies."

The German Near and Middle East Association also expects more investors from the region. "There is huge interest and further investments will be coming," said board member Helene Rang.

A major driving force for them is the historic decline in share prices. "That can make an investment look cheap," said Steffen Kern, an analyst of sovereign funds at Deutsche Bank. "The funds have suffered income declines as a result of the economic crisis. But they still have net inflows that need to be invested." In many cases, those inflows stem from raw material sales.

Al-Qubaisi said the timing for the Daimler investment was perfect: "It's best to buy when there's panic in the market," he said bluntly.

Given the persistent market turbulence, funds have refrained from major transactions in recent months. Instead of spending money abroad, they have switched to protecting domestic companies. "In the Gulf region and in Asia, sovereign funds have been helping to shore up the home economy and have been investing in infrastructure and construction projects in their own countries," said Deutsche Bank's Kern.

In addition, funds are refocusing after getting stung by investments in financial institutions in the last two years. "The financial crisis was a wake-up call," said Schalast. "That's why they now need to review their strategy."

Daimler could serve as an example of that change in focus. Aabar plans to cooperate with Daimler in the development of electric cars and innovative compound materials. Daimler will also help to set up a carbon-emission free traffic project and an auto industry academy in Abu Dhabi. But Al-Qubaisi ruled out setting up a Mercedes plant in Abu Dhabi -- that would be too expensive, and the local market was too small.

Funds Demanding a Say in Management

The new rule seems to be: get involved rather than stand by and watch.

"Many sovereign funds are determined to take a more active role in the management of the companies they own stakes in," said Schalast. "Their strategy is changing. They are increasingly behaving like classic investors."

If the trend is confirmed, the times when Arab investors simply nodded through decisions by German management boards will be over. Kuwait, which has owned a stake of 7.6 percent in Daimler for years, rarely made any demands, apart from once, when it unsuccessfully urged the management to rapidly sell its loss-making small car unit Smart.

Arab investors will continue to focus on Europe and Germany, analysts say. In Europe, investors are interested in a broad range of industries, from machine production to carmaking.

Another European advantage is the euro. "Many funds try to prevent the dollar share of their portfolios from getting too big," said Deutsche Bank's Kern. "The euro area offers diversification." In the case of Germany, emotional factors come into play as well, from an Arab point of view. Top German brands like Daimler promise a "high value guarantee," said Schalast.

The funds are less interested in technology transfer or boosting the Gulf's own political clout than in simply getting a successful long-term financial investment.

The German government last year introduced legislation to give it the power to block major acquisitions of German firms by foreign investors from outside the EU. The aim was in part to prevent an exodus of German technology and know-how.

But the new rule, which allows the government to prevent foreign purchases of more than 25 percent of a firm's voting rights if it deems the investment "a threat to public order and security," is unlikely to be used in these times of crisis. Given that many companies are badly in need of capital, authorities are unlikely to throw up any hurdles to acquisitions.

German companies for their part seem keen to welcome foreign sovereign funds, according to a survey of the 80 companies in the DAX and MDAX conducted by the Frankfurt School of Finance. "The firms have no misgivings as regards the entry of sovereign funds," the study says. Companies see the funds as "reliable investors with a long-term focus."

However, German executives will probably have to communicate more with their Middle Eastern investors, and to seek their approval on key strategies in advance of annual shareholder meetings.

So far, the lines of communication between Daimler and Aabar seem to be working fine. Al-Qubaisi said the idea for an investment came during a lunch four months ago. His German business partner immediately rang a Daimler supervisory board member and meetings were arranged. Zetsche has already praised the commitment shown by his new shareholder. Aabar's €1.95 billion payment had already arrived in Daimler's account on Monday morning.