SPIEGEL: Professor Roubini, you have a cameo role in the upcoming sequel of the movie "Wall Street." Who are you playing?

Roubini: I'm playing myself. But it's just a small role. There is a scene right after Lehman has collapsed where I'm being interviewed as "Dr. Doom," worrying about the global financial system.

SPIEGEL: We understand you also acted as a consultant for Oliver Stone, the director of the movie?

Roubini: I was not a formal consultant, I just helped him with some advice. We met on a couple of occasions and he asked me about the financial crisis. He also came to a social event with clients of my firm; he wanted to meet hedge fund managers. I came rather accidentally to my role in the movie as "Dr. Doom."

SPIEGEL: You got your nickname, of course, because you were predicting the financial crisis at a time when many other economists were still full of optimism. Are you still pessimistic about the future of the global economy?

Roubini: First of all, I'm not a perma-bear. I am not always negative about the future. Rather, I want to assess the situation correctly. But if I look at the economic picture of the world now, I still see plenty of dark clouds.

SPIEGEL: According to the International Monetary Fund, economic activity is picking up again with forecasts of 4 percent growth this year. Isn't this cause for Dr. Doom to surrender to Dr. Boom?

Roubini: I'm a realist. I can only see a few bright spots in some countries like China, India or Brazil. But the rest? The US economic recovery has been anemic, Japan looks comatose, and Europe is facing a double dip. The Continent is vulnerable to falling back into recession. Even before the Greek shock, the outlook was rather moderate, but now euro zone growth is closer to zero.

SPIEGEL: What do you think about the dangers presented by Greece?*

Roubini: Today the markets are very worried about Greece, but that's only the tip of the iceberg. Increasingly, bond market vigilantes have woken up in places like the UK and Ireland. Even the US and Japan will have problems because of their huge budget deficits. Maybe not this year, but they will eventually. In the US, states like California, Nevada, Arizona, New York and Florida have immense fiscal problems. The growing budget deficits and the huge government debts are really what worry me most.

SPIEGEL: Is it really the right thing to do for the IMF and the EU to help out Greece with €110 billion?

Roubini: That is only kicking the can down the road for a year. I am afraid that Greece, more likely than not ,isn't just illiquid, but insolvent. And providing an insolvent country with money and forcing it to make painful cuts isn't going to do it. Even if taxes are raised and spending is cut, Greece won't necessarily become more competitive. On the contrary, output might fall, unemployment might rise and market share will be lost. We need a plan B.

Roubini: It is necessary to start with a pre-emptive debt restructuring. We have to find an orderly solution for debtors and creditors. And we also need to work out fiscal adjustments for other euro zone countries like Portugal or Spain.

SPIEGEL: Do you think the German government would agree to that? German banks would have to come up with billions once again.

Roubini: Indeed, more than €300 billion of Greece's public debt is held by non-residents, mostly financial institutions from Germany, France and Switzerland. They will have to forego a part of that. Too much time has already been lost by ignoring the Greek crisis. Without such a plan B, if Greece collapses in a disorderly way then the domino effect hitting Spain, Portugal and other parts of the euro zone could be very rapid and dangerous. Eventually, this could lead to a destruction of the monetary union.

Roubini: Yes, the EU wasted several precious months in designing a support package for Greece in part because of German political resistance to such a package. Domestic German politics and growing skepticism about European monetary union led to a delayed policy response that damaged the efforts to contain the Greek crisis and prevent it from infecting other parts of the euro zone.

SPIEGEL: Was monetary union a mistake?

Roubini: I wouldn't go that far. But it might have been a mistake to allow so many countries in so early. A smaller core of countries that are economically more homogenous, fiscally more sound and committed to structural reforms would have made for a more successful monetary union. The trouble is, once they are in there is no exit without causing a lot of damage.

SPIEGEL: Today, it's a debt crisis. Before that it was a banking crisis. And before that a real estate crisis. Must we get used to constantly being hit by new crises?

Roubini: I am afraid so. In my new book, I show that crises are part of capitalism's DNA. They are not the exception but rather the rule. Many elements vital to capitalism, like innovation and risk taking, also trigger frequent collapse. And what we just went through could get much worse in the future.

SPIEGEL: You make it sound as though crises were inevitable.

Roubini: They are not inevitable. But if you look at history, you will see patterns repeated -- such as excessively loose monetary policy, leveraged vulnerabilities and weak regulation. And we will see them again. Probably we will have even more crises in the future.

'We Have to Starve the Beast'

SPIEGEL: Is there a script for crises?

Roubini: No crisis is identical but many of them are similar. There is a stage of boom and bubble before the bust and the crash. People will see the value of certain assets like homes or equity go up, then they will use these assets as a collateral for borrowing too much and therefore you have a build-up of leverage in the financial system. And then, once the bubble goes bust, the value of the assets falls and people are stuck with all this debt they can't repay.

SPIEGEL: But how do you recognize a bubble?

Roubini: It's difficult. I get suspicious when people say, this time it's different and this innovation is going to radically change the way we live and work and it is going to lead to long-term massive increase in actual wealth. During the tech bubble there were people writing books with titles like "Dow at 36,000."

SPIEGEL: Currently a lot of money is going into commodities like oil and copper. Is that our next bubble?

Roubini: Possibly. To me it looks like some of it is not due to demand but liquidity chasing commodity. It is one of my major concerns right now: We decided to save the global economy by flooding the world with a massive amount of liquidity. Now we risk making the same mistake as during the last cycle.

SPIEGEL: But what would have been the alternative to stimulus programs and the intervention of the central banks? Leaving it to the markets could have driven the world into a depression.

Roubini: That's true. But we have to be careful not to go down that road for too long. Otherwise we risk creating zombie banks and companies that are kept alive artificially. Also, look what is going on with the banking industry. We started with a too-big-to-fail problem, and part of the policy response to the crisis has been even more financial consolidation. JP Morgan took over Bear Stearns and Bank of America took over Merrill Lynch. What we have now is financial institutions that are even bigger. Those institutions, even more then before, know if they do something dangerous, something reckless, they will be bailed out again.

SPIEGEL: Should the institutions that are too big too fail be broken up?

Roubini: Why not? We have to starve the beast. The official policy approach has been, let's create a resolution regime for an orderly wind down. My concern is: How do you, in an orderly fashion, close down a globally operating financial institution like Goldman Sachs or Morgan Stanley in the heat of the next crisis? It is too risky, and in the end it would be: Let's bail them out again.

SPIEGEL: But how do you determine who is too big to fail?

Roubini: If I had to think about the parameters that define a systemic important institution, certainly the size of assets and liabilities as a share of the financial system and the GDP are relevant. Certainly the amount of leverage and liabilities not only on, but also off the balance sheet are important. And how crucial that institution is in the clearing and payment system is also important. At the end of the day, it is not too hard to figure out which ones they are.

SPIEGEL: US President Barack Obama has introduced plans for financial reform, including the so-called Volcker rule and other regulations to limit the size of banks. Is more drastic regulation needed?

Roubini: It's a good start, but I am thinking in a more radical direction. The financial supermarket model obviously has not worked. An institution where you have, all in one place, commercial banking, investment banking, hedge funds, insurance and lots of other financial services becomes too complex to manage. No CEO can effectively monitor that. So, this all needs too be broken up into pieces. If you have many different institutions which do different types of financial services, none of them will be systemically important.

SPIEGEL: Almost 100 years ago, the US government broke up Standard Oil -- and the world ended up with pieces that became bigger than the original.

Roubini: What I am proposing goes back to Glass-Steagall Act types of restrictions between commercial and investment banking, regulations that already existed until about 10 years ago. They worked well.

SPIEGEL: What additional financial reforms do you consider indispensable?

Roubini: The derivative markets have to become more transparent, and securitization has to be more strictly regulated. Financial institutions need to change their compensation systems in a way that they don't lose sight of long-term interests. And the rating agencies need to be forced to change their business model so conflicts of interest are no longer an issue.

SPIEGEL: Unfortunately, it seems rather utopic right now for very far-reaching reforms to be pushed through.

Roubini: I don't expect that my views are going to be implemented during this crisis. We might have to wait until the next one, until more radical proposals will be considered. My worry is that if we don't create a system where these crises occur less frequently, then the backlash we have seen in recent times against market oriented economies, against reforms, against globalization, against free trade, could become more severe the next time around. The lesson is actually if another crisis were to occur down the line, it's going to be even more virulent then the last one, even more damaging and costly for any measure you want to look at, income, jobs, wealth, fiscal costs. We just can not afford that.

SPIEGEL: Your reform proposals are derived from the current crisis. Will they also work for avoiding any kind of future financial crisis?

Roubini: We can not make crises disappear entirely. But if we can make them less frequent, less virulent, that will already be a success.

Editor's. Note: This interview was conducted before the European Union and the International Monetary Fund agreed on a €750 billion package to shore up the euro in the early hours of Monday morning. 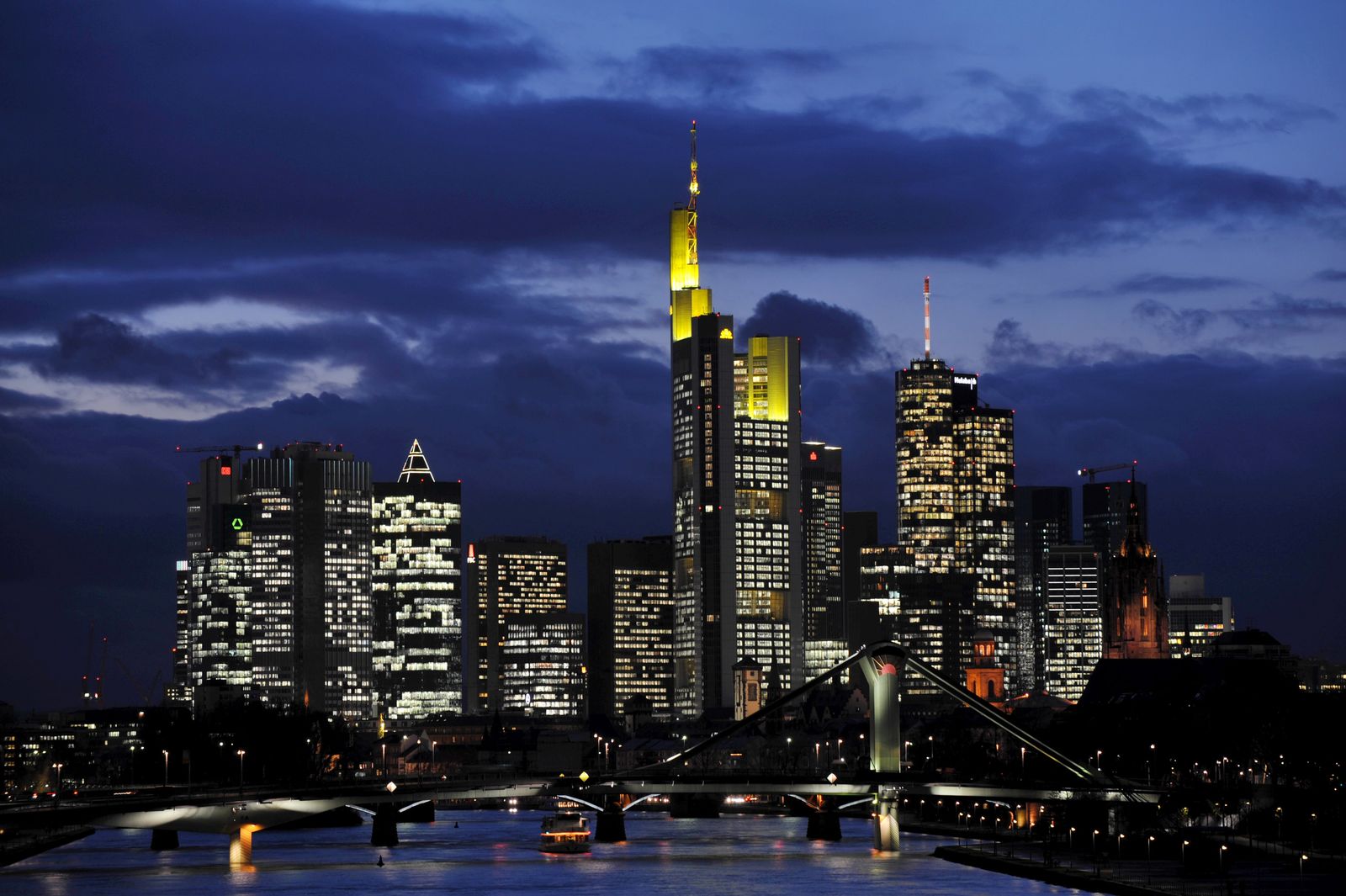