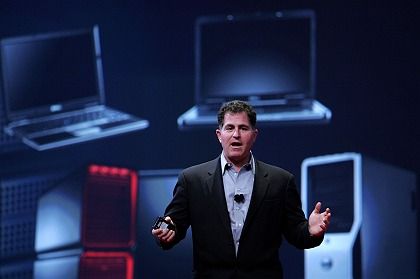 Michael Dell is back running Dell.

SPIEGEL: Did you wait too long to come back?

Dell: I probably could have come back a little bit sooner, but I don't think I waited too long.

SPIEGEL: What made you decide to return?

Dell: The board asked me to come back. It was clear that we needed to make some changes in the company. I'm actually quite excited to be back -- it gives us a chance to reinvent the business. We've taken a very fresh approach to things. We're willing to question anything, change everything and do whatever it takes to get success and results for our customers, our shareholders and our people inside the company.

SPIEGEL: Your profits have been falling for quite awhile.

Dell: One reason is fairly easy to see: our head count grew by 50 percent to about 80,000 employees while revenues grew by just 15 percent. That's not a good idea.

SPIEGEL: What were these people hired for?

Dell: We've been asking ourselves that same question. I think the organization got too complicated. We made it too complicated. The CEO had too many people reporting to him, each person reporting to the CEO had an organization to support him, and then these had their own supporting organizations and so on. It multiplied out to be a whole lot of people. Everyone was well-intentioned, everyone went to work saying 'We're going to do great work today,' but when you add it all up, the structure didnt work out.

SPIEGEL: Does this mean layoffs?

Dell: I think it's pretty clear that our head count is going to go down.

SPIEGEL: Do you feel pressured by your shareholders?

Dell: I'm the biggest investor in the company, so I feel my own pressure.

SPIEGEL: Dell used to be the biggest computer maker worldwide. But last year Hewlett Packard took over and became global market leader. What makes them more successful than you?

Dell: We're still the most profitable producer. HP makes money mainly with printers. Their profit in the PC business is much less than ours. But they are now number one worldwide, absolutely. 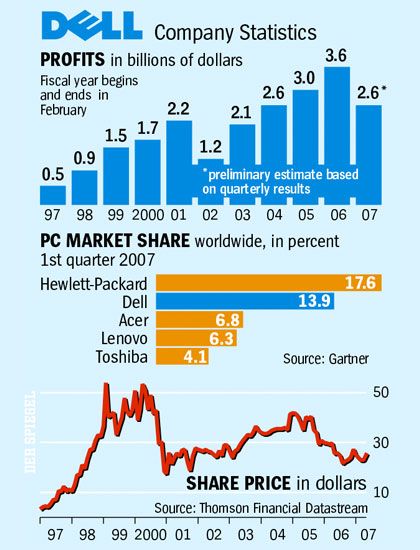 Dell by the numbers.

SPIEGEL: Was it a mistake to focus on corporate desktops while laptops gained in importance and increasingly became a must-have entertainment device?

SPIEGEL: Dell was famous for its low-cost approach -- for its direct-sales model via Internet and telephone. Is that still an advantage today?

Dell: We are 10 times more efficient than all our competitors. Did some improve? Absolutely, but we still have a big advantage. We think we can even enhance it. We're looking at our entire system and saying, 'where do we have overlaps and inefficiencies, where can we reduce time and improve speed, where have we made it too complicated and not gotten value for customers and shareholders?'

SPIEGEL: What was your first move after taking over as CEO again?

Dell: One of the things was to create a kind of amnesty environment.

Dell: We basically said, bring all your problems to the table and please tell us everything that's not going as well as it could. We got huge lists out of this. For example, I found out that Dell has been a company which has been very good at listening, but that we had lost some of that. So we created this Web site called Idea Storm. Now we are getting thousands of ideas from customers. Or they vote on different computer housings on this site so we know which one they like. We're getting this feedback in real time. It's fantastic.

SPIEGEL: Years ago, people sometimes even lined up on the streets as soon as new computer models or software came out so they could buy the latest. That seems to not be the case so much any more.

Dell: There is still an enthusiast market which always wants the latest, but this percentage of the total market is becoming smaller and smaller. It's also true that processor speeds are increasing in a way that nobody really needs. The most important thing now is high-speed Internet connections and multi-media applications.

SPIEGEL: In other words, people don't need a new computer every 18 months any more.

Dell: It depends on your job. If you're a trader at an investment bank, you always want the fastest. You'll replace your PC every six months. Consumers probably now buy a new one every three or four years.

SPIEGEL: What does this tell you?

Dell: More and more of our business is focusing on service. Our business services sector has grown in four years from less than $2 billion to $6 billion. We made the PC easy, simple and cost effective. Now we want to make IT easy, simple, and cost effective. A lot of companies are really suffering from complexity in IT and they need an army of consultants to keep their systems running. We call it "feeding the dinosaurs." Thats where we want to help with new and easy standards. To give you an example: We are managing the entire IT-structure of Boeing, including computers, software and printers.

SPIEGEL: Most of your growth, though, is likely to come in quickly developing countries like China. What is your strategy there?

Dell: We just introduced a new product for $349. It's a very basic PC -- not expandable. But if you want to do basic functions like get on the Internet, do word processing, e-mail, spreadsheets, that sort of thing, it works just fine. Its for the new PC buyer -- we are talking about the next billion computers -- and they're coming in China and India, Brazil, Turkey, and Russia. There is a lot of opportunity there.

SPIEGEL: A cheap PC -- is that enough? Analysts expect the Chinese computer market to outgrow that of the US by 2013.

Dell: I'm not sure about that. But it is growing very, very fast. We've grown 45 percent per year in China and we have two factories there. In China this year we are spending almost $19 billion with our suppliers. That's much higher than what our local Chinese competitor is generating in revenues.

SPIEGEL: You mean, of course, Lenovo, which took over IBMs PC business more than two years ago. It didnt really work out, did it?

Dell: No. They have lost market share everywhere in the world except China where they're kind of treading water.

SPIEGEL: Why isn't Dell doing so well in Germany? Four years ago, you told DER SPIEGEL that you'd become market leader here by 2008. But that hasn't happened.

Dell: We still have a year left. We moved up to rank three from rank five last year. And we're number one in the commercial market. But no question about it. We can absolutely do better.

SPIEGEL: When Steve Jobs returned to Apple, he reinvented the company. With the iPods success, his market value now is much bigger than Dells. Is Jobss performance an example for you?

Dell: There are lots of examples. Apple's a pretty different company than Dell. But he's certainly done a very nice job.

Dell: If you look at the development of Dell from 1984 to today, we have a history of doing new things. We're not going to stagnate. Look at the consumer market -- so far were participating in just one part of this business, the computer.

SPIEGEL: How will that change?

Dell: It's still a secret right now. But think about what's happening with wireless communications. There was a reason we hired a new consumer head who comes from Motorola.

SPIEGEL: Computer, home entertainment, communications, its all moving together. How is this changing the business?

Dell: First of all, the lines that previously separated various industries are breaking down. Five years from now when you ask yourself what is a PC, what is digital home entertainment, what is a cell phone, the differences won't be so clear. Companies who used to deal in totally different business models will be looking more and more like the same industry.

SPIEGEL: What sets you apart from them?

Dell: We have some great assets there for sure. We have a direct relationship with our customers, which is very valuable. We have a very strong brand. We have a great connection with commercial customers, and we have a supply chain model. You'll see many new things from Dell.

SPIEGEL: Did the world of Web 2.0 change your thinking?

Dell: I'm a big believer in online communities and in user-generated content. We now have a relationship with tens of millions of customers online in real time, even in China, where people tell us what they want. Its quite, quite interesting.

SPIEGEL: It makes you vulnerable as well. Pictures of an exploding Dell laptop were all over the Internet for a while.

Dell: Actually I'm very proud of the way we handled that situation in the face of enormous criticism. We knew it was a problem, and we did the right thing by recalling those batteries. I called almost all the CEO's of our competitors and said I'm going to announce a recall of these batteries, and you should join me. And every other company lined up and said, no, we don't have that problem. And then, one by one, they had to admit they did have one.

SPIEGEL: Is the transparency of the Web good or bad?

Dell: Its very powerful. On Dell.com we now have ratings and reviews by consumers. If we don't do it on our site, customers will write it down somewhere else anyway. So why not just have this discussion here? And actually we're more trusted, more authentic if those conversations are occurring on our site. Our people are listening and watching and paying attention and responding. Our customers want Windows XP? They get it. They ask for Linux? Here you go. That's very, very different than Apple. Apple doesn't do that. They're artists. And if you don't like their art, you know, too bad.

SPIEGEL: Thank you very much for taking the time to speak with us.