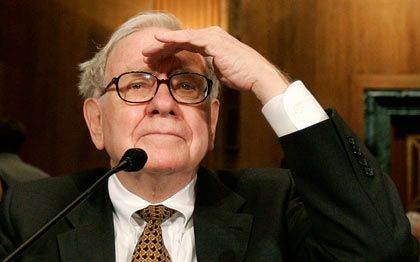 Looking to the future? Warren Buffet has set his sights set on acquiring German companies.

SPIEGEL: Real estate prices have plunged rapidly in the United States, energy is getting more expensive by the day, the financial sector is in a miserable condition and new risks are lurking everywhere. Can the United States even avert a recession anymore?

Warren Buffett: Well, I'm not an expert on the economy. I couldn't make any money predicting the course of the economy for six months or a year. But I do believe that we are already in a recession. Maybe not according to the economists' definition. That would require two consecutive quarters of negative growth. We haven't reached that point yet. But people are already feeling the effects of the recession. It will be deeper and last longer than many believe. But my business models aren't based on current forecasts. In fact, they are completely independent of forecasts. Even if the world went under, I would still be buying companies.

SPIEGEL: But you yourself have said that the party is over.

Buffett: Yes, but I was just talking about the insurance sector. For decades, it was possible to make relatively good money in insurance. But those days are now gone.

SPIEGEL: What about the financial industry?

Buffett: The party is never over there. Sure, there will always be new upheavals. We are now experiencing one of those upheavals, as evidenced by the near-collapse of investment bank Bear Stearns. But this sort of thing also presents huge new opportunities for investments, even if this is happening in a chaotic period.

SPIEGEL: Suddenly so optimistic? You yourself have referred to some of the tools of the financial industry as "weapons of mass destruction." It sounds almost like what German President Horst Köhler said about the financial markets, which he described as "a monster."

Buffett: I don't condemn the entire industry. When I mentioned weapons of mass destruction, I was merely referring to the out-of-control trading in derivatives. It doesn't make sense that hundreds of jobs are being eliminated, that entire branches of industry in the real economy are going under because of such financial gambles, even though they are in fact completely healthy. Besides, these types of constructs are so complicated that hardly anyone understands them anymore.

Buffett: They concocted a poisonous brew, and in the end they had to drink it themselves. This is something bankers are normally extremely loath to do. They'd rather sell it to someone else.

SPIEGEL: How can these financial instruments be monitored?

Buffett: That's the problem. You can no longer control or regulate this sort of thing. It's taken on a life of its own. You can't put the genie back into the bottle. The American central bank, the Fed, tried to exert its influence by lowering interest rates, for example. The Fed and the US government have absolutely no interest in promoting the extreme fluctuations we are now experiencing. Nevertheless, they were also unable to prevent them.

SPIEGEL: Based on your logic, any future US administration will also be powerless. Who would you like to see as the next president?

Buffett: Before they launched their candidacies, I told the two current Democratic candidates: I support you. I have donated the maximum amount of money allowed by law to the Democrats, and I've spent the same amount of money to support both Barack Obama and Hillary Clinton. But that's like being married to two people. You have to make a decision at some point. I chose Obama, and I hope that he wins.

Buffett: I just happen to agree with many of his views, starting with his modern proposals for abortion and reproduction policy and ending with the fiscal policy he envisions.

SPIEGEL: You've come to Germany to invest in family-owned companies. What do you find so attractive here?

Buffett: We are looking for large, well-run companies that we understand right away. The one condition is that they have grown over several decades. Companies that are three or four years old are out of the question. Of course, many families will not be interested in selling such attractive companies. I understand that completely. But sometimes there is a good reason to sell the company, after all. When that happens, we want the families to think of us first.

Buffett: I don't have a specific shopping list. I'm looking for companies with a long-term, permanent competitive advantage, companies that are managed by good people and that are good value. We have only 19 people at Berkshire in Omaha, which is why we need good local managers. I can think of a number of companies in Germany that would interest us. But as an outsider, I can't say when the circumstances are right for a sale. That's why these people should call me directly.

SPIEGEL: Whose call would you welcome in particular?

Buffett: It wouldn't be good for me or the companies if I told you their names.

SPIEGEL: The German economy is in a highly robust state at the moment, while a few other Western countries are having economic problems. How do you account for this?

Buffett: It shows that the Germans know something about business. In fact, the strong euro works against Germany. But if an exporting nation like Germany is still strong, it proves that the supply and quality are right. And that many correct decisions were made in the past and that reform efforts were worthwhile.

SPIEGEL: In addition to companies like Coca-Cola and Procter & Gamble, you have invested many billions of dollars in reinsurance companies. Now insurance premiums are falling. Did you make a mistake?

Buffett: I have been in the business since 1970, and it's always gone up and down. Perhaps I won't make quite as much money in the next 12 months, but overall I believe that the industry is in good shape, despite the current slump. When we buy something, we stay forever and forever. Many find this irritating, but that's just the way we are.

SPIEGEL: Munich Re was the first German company in which you invested directly. Another investment for posterity?

Buffett: We have two different categories at Berkshire Hathaway. There are 76 companies that we own permanently. And then there is a trading inventory. Munich Re is part of the second category.

SPIEGEL: Have you met with the executives at Munich Re?

Buffett: Yes, two years ago. We also bought shares in another German company

Buffett: I'd rather not say. Those shares are also part of our trading inventory and can be quickly sold again.

SPIEGEL: You have pledged about half of your fortune to the Bill & Melinda Gates Foundation. What happens with the other half?

Buffett: In addition to the Gates Foundation, I have pledged money to four other foundations. So far, 80 percent of my stock holdings have been firmly committed to these five organizations. I have promised that I would ultimately donate every one of my shares in Berkshire Hathaway. My will clearly specifies what will happen to the remaining shares. But I can still change this decision while I'm alive.

SPIEGEL: You are the richest man in the world

SPIEGEL: Let's not argue about a few billion. How does your immense wealth affect your everyday life?

Buffett: I have everything I need. But that's also the way I felt at 25, when I didn't have that much money yet. I have a wonderful family. I have a job that I love and wonderful people who help me with it. It can't get any better than that.

SPIEGEL: What's your take on the new class of the super-rich, such as the many Russian oligarchs who ostentatiously show off their wealth?

Buffett: Well, if it makes them happy It doesn't do anything for me. I'm happy when I can spend every day doing the things that I like to do. That's my luxury. Things could have gone differently, but I was lucky.

SPIEGEL: You have no interest in a new mansion in Omaha, or perhaps a luxury house at the beach? After all, you've been living in the same house for decades.

Buffett: I don't need 15 houses. Owning real estate doesn't mean much to me. I don't like to think about things like that. I don't need 12 boats, or even the world's largest boat with a crew of 80. I'd have to take care of them, to worry about them. I get a lot more fun out of life without all the bells and whistles.