Dmitry Kotenko admits that when he and a group of friends decided to found their own business in 1998, they had no idea what exactly the new business would do. They knew only that they wanted their business to be new, innovative, and technological. Hence the name: Nitol. 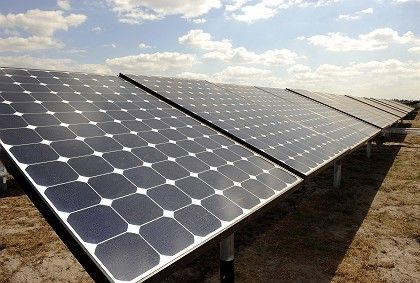 The hope of the future? Nitol Solar aims to see reliance on solar power soar in the coming years.

Ten years later, Nitol has not only a techie-sounding name but also a dynamic business to match. Now called Nitol Solar, the company is Russia's largest producer of polysilicon, the basic raw material used to make solar panels that turn sunlight into electricity. Nitol stands out as an all-too-rare commodity in Russia: a technologically savvy company that has grown in the space of a few years from tiny startup to billion-dollar success story. It's a model that Russia's leaders say they are eager to promote as the country casts around for new ways to achieve economic competitiveness in the 21st century.

Lately, nothing seems to have captured the imagination of politicians more forcefully than alternative energy. In an interview with CNBC host and BusinessWeek columnist Maria Bartiromo on June 4, President Dmitry Medvedev emphasized the importance for Russia of "cutting-edge technologies," especially in "green economy, energy saving, and energy efficiency." It's a theme both he and Prime Minister Vladimir Putin increasingly have emphasized in recent months.

Solar energy in particular is emerging as an area where Russia has high hopes of carving out an international niche. The Russian Nanotechnology Corp., a state company with ambitious goals for promoting high-tech exports, has identified solar energy as one of its priorities. In its biggest deal to date, in June, Rusnano partnered with Renova, a leading Russian industrial conglomerate, and Oerlikon, a Swiss engineering firm, to announce plans for a $630 million (€451 million) solar cell plant in the central Russian town of Novocheboksarsk. It's just one of a dozen solar-related projects currently being mulled or expanded by Russian companies.

In Search of an Industry

Nitol Solar's story illustrates why there is such excitement about the sector's potential. Kotenko, 38, a former student at the prestigious Baumann Technical Institute in Moscow, had ditched science in the 1990s for the more lucrative world of business. But after garnering managerial experience in the banking and metallurgical businesses, he had a hankering to bring this knowhow to bear back in the scientific field. "I wanted to find something new and extremely interesting. Above all, it had to be competitive," he says. Just what, though, wasn't immediately clear.

The answer came rather by chance some five years later, when Nitol, at that time a chemical trading company, had an opportunity to acquire an old chemical factory at a knockdown price. Located near the remote Siberian city of Irkutsk, the 70-year-old plant didn't seem to have much future. Kotenko says the plant, located hundreds of miles away from any significant markets, "was in terrible shape."

But it did have one thing going for it: A small unit at the plant produced a chemical called trichlorosilane that's used in industrial processes and is also a key ingredient in polysilicon for solar panels. Kotenko and his partners realized that if the plant were to have a commercial future, it would have to refocus away from mass-produced industrial chemicals and toward the higher value-added solar industry. They set about educating themselves about the renewables business from scratch. "We realized it was like another world," Kotenko says.

The move proved to be highly fortuitous, coming just as the solar industry was taking off worldwide. From 2003 to 2008, solar electricity production increased tenfold worldwide, while global sales for solar power equipment soared to $37.1 billion in 2008 -- more than double the figure a year earlier, according to consultancy SolarBuzz. The growth has been driven by higher prices for traditional fossil fuels as well as increasing subsidies from governments keen to diversify energy sources. A recent forecast by the European Photovoltaic Industry Association, a leading industry body, predicts that global solar energy generation will at least double by 2013, and could quadruple with further government support.

Nitol has sought to cash in on this growth by greatly expanding the Irkutsk factory's output of trichlorosilane and by branching into the production of polysilicon, the next stage up the value chain. Once full capacity is reached around the middle of next year, annual sales are forecast at some $300 million. The company already has invested $700 million to build modern production facilities. That's no small achievement, coming at a time when the global financial crisis has starved Russian companies of finance.

Nitol hasn't entirely escaped the effects of the global cash crunch. It was forced to cancel a planned initial public offering last year on the London Stock Exchange. Instead, other investors stepped in, notably Suntech Power Holdings, a leading Chinese solar cell manufacturer, which acquired a minority stake in Nitol last year, and Rusnano, which provided $140 million in credits and $94 million in guarantees. It helps that Nitol already has managed to sign $1.66 billion in long-term (five- to seven-year) contracts with some of the biggest players in the industry, which have provided $100 million in prepayment financing.

One of Nitol's largest customers is Massachusetts-based Evergreen Solar, a leading US maker of solar products. Richard G. Chleboski, Evergreen's vice-president for global expansion, says Nitol "seemed like credible people" with a sound business strategy. It also helped that the company's Irkutsk factory had long experience with making trichlorosilane, the "toughest part" of the manufacturing process. Although the Russians' existing technology was old, it provided a good foundation. "With Russia generally, there are some very good scientists and people experienced in materials research," Chleboski adds.

Although most of the cutting-edge technology these days is of foreign origin, Russians have played a significant role in the past, developing pioneering solar technologies that were used by the Soviet space program. Another key advantage is Russia's low energy prices, made possible by plentiful supplies of cheap gas. That's a big plus, because large amounts of electricity are required to make polysilicon. Kotenko says that manufacturing costs for polysilicon in Russia are around $30 to $40 per kilogram, well below the current market price of around $80 a kilo.

Labor is relatively cheap, too, but in this respect Russia faces stiff competition from China, which is also shaping up as a major supplier for the solar industry. "Strategically we see China as the biggest competitor," says Kotenko. "But we would like to be on a higher level because of our technology."

Russia faces other challenges, though, if it aims to become a major player. The biggest problem, Kotenko says, is the lack of any coherent government policy to encourage the use of solar energy domestically. Although Russia has plentiful supplies of cheap fossil fuels, he argues that the potential for solar electricity production shouldn't be underestimated. Despite its reputation for wintry weather, many parts of Russia are actually as sunny as the South of France or Italy. (Irkutsk, for instance, has some 300 days of sun per year.) And far from being a drawback, cold weather actually enhances the efficiency of solar panels.

Prodded by Medvedev and Putin, the Russian government may at last be beginning to see the light. Under a strategy drawn up in January, the share of alternative energy generation in Russia is set to rise to 4.5 percent by 2020, up from less than 1 percent today. That, plus growing export orders, could mean a sunny future for Nitol and the rest of Russia's nascent solar industry.