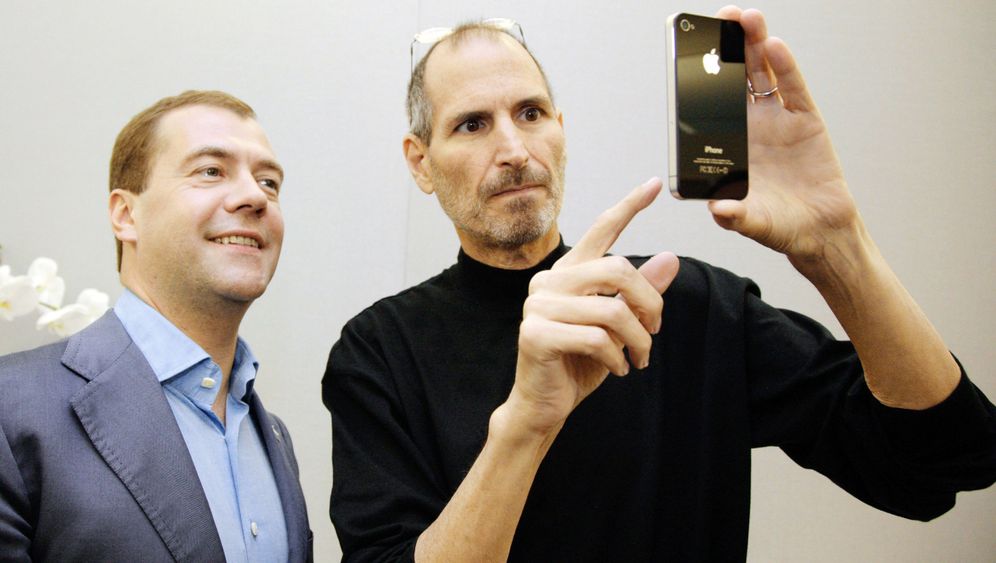 It was 1984, the year to which George Orwell had dedicated his dark vision of a future in a totalitarian world. There were those who conjured up Orwell's prediction, but soon they discovered that things were not nearly as bad as the author had feared when he wrote "1984" in the late 1940s.

It was in the midst of this creepy atmosphere evocative of Orwell's "1984" that Apple, still a tiny US computer-maker at the time, released an ad that was intended to attract a great deal of attention. In the ad, a group of gray and dull-looking people is sitting in front of a huge screen with an image on it of a dictator giving a speech. Suddenly a young woman runs into the room and smashes a hammer into the screen, which then breaks apart with a loud crash.

The message was clear: The evil dictator was IBM, still the world leader in the computer industry at the time, with its efficient, bland, skin-colored computers. The girl symbolized Apple, freedom and revolution.

That was a long time ago. Now Apple itself is a world power and, more recently, it isn't even clear anymore whether the company still represents good or is now the embodiment of uncontrolled power and the Orwellian urge to keep tabs on people. That, at any rate, is the way they see it at Apple's rival, Google. At a conference in mid-May, a Google executive said that If Google did not act we faced a "Draconian future" -- one in which "one man, one company, one device, one carrier would be our only choice." To reinforce his message, he projected the number "1984" onto the wall.

Apple CEO Steve Jobs picked up the gauntlet in early June, when he said: "They decided to compete with us. So they are." It was yet another attempt to continue playing the old game, in which someone else is always portrayed as the bad guy. But it isn't working anymore.

Apple itself is in the process of becoming an omnipresent and omniscient data leviathan, a "Big Brother" that knows or wants to know more and more about its customers -- but reveals almost no information itself.

In the past few days, every Apple customer who has attempted to buy something in the iTunes Music Store or the App Store has been confronted with a window in which he is asked to read and agree to new terms and conditions. In the text, the global corporation requests the customer's consent to Apple knowing where he -- and his iPhone, iPad or MacBook -- happens to be at any given time, and to Apple processing the information and even disclosing it to third parties.

In legal jargon, the message reads: Effective immediately, "Apple and our partners and licensees" may "collect, use and share precise location data, including the real-time geographic location of your Apple computer or device." Apple claims that this geographical data is "collected anonymously in a form that does not personally identify you." But the company does not specify exactly how it intends to ensure that this will be the case.

The move was met with outrage. It was the Los Angeles Times that seized upon the questionable passage, thereby bringing Apple, after Google and Facebook, its first real data privacy scandal. US bloggers promptly dubbed the program "iSpy," and the blog "The Consumerist" has characterized the company's thirst for data as "creepy."

Oddly enough, Apple has already used similar wording in its terms of use in the past, with the iPhone, for example. But as is often the case with such legalese, hardly anyone reads the fine print and realizes exactly what rights he is relinquishing to the company by checking a box and impatiently clicking on the "I accept" button.

As belated as all the fuss may be, it is nevertheless justified. The one thing that is clear is that the data Apple is gathering and storing is extremely sensitive. Someone who knows a person's exact whereabouts can reach surprisingly precise conclusions about his life. Apple, for its part, might as well forget about its anti-Orwellian image of itself.

To make matters worse, for the first time the company is trying to sell this information on a large scale to advertising customers.

Ironically, it was only in early June that the Apple CEO insisted that his company was very concerned about privacy. Jobs claims the company is particularly worried about the use of geographical location data obtained from smartphones. He even claimed that when it comes to privacy issues, Apple might seem old-fashioned, because of its wary view of things.

Now, as a problem that is not entirely new is finally being recognized, German politicians -- who have been very vocal in their criticism of the privacy policies of Google and Facebook -- are also expressing concern. Justice Minister Sabine Leutheusser-Schnarrenberger, a member of the pro-business Free Democratic Party (FDP), says that Apple must "immediately disclose" what data it captures, how long the data is stored and how it is used.

"It must be clear to the users of iPhones and other GPS-enabled devices what information about them is being gathered," says the minister, adding that it would be "inconceivable" if Apple were in fact to create personality or even mobility profiles of its users. "In this case, I feel that it is Apple's obligation to actually implement the transparency so often invoked by Steve Jobs." And then she added: "I expect Apple to provide German privacy groups with access to its databases."

Till Steffen, a Green Party politician and minister of justice for the city-state of Hamburg, also takes a critical view of the issue: "The providers' unclear data privacy rules show, once again, that privacy laws are lagging behind Internet technologies."

Apple Takes on Google Where It Is Most Vulnerable

But how much of an impact can such concerns have when it comes to the large sums of money at stake in the global advertising industry?

Apple intends to attack Google where the giant company, which began as an online search engine, is most vulnerable: in its high-stakes advertising business. In early July, Apple plans to launch its own distribution platform for mobile advertising, called iAd.

It was inevitable that Apple would not be able to avoid providing location data on its users to its advertising customers. "Advertising in the mobile Internet is almost unimaginable without such location data," says Karsten Weide of the market research firm IDC. "There is now enormous pressure from companies to make advertising more targeted and efficient."

Kais Makhlouf believes that Jobs' previous protestations were mainly hypocrisy. Makhlouf, an executive with the Canadian-American online advertising agency Nurun, which includes brands like L'Oréal, Louis Vuitton and Maserati among its clients, would have liked to use location data in the past to make his clients' ads on the iPhone more local. "Apple made this impossible. They wanted to wait until they were ready to control the business themselves and pull the strings," says Makhlouf.

Even Jobs says that competition between the two giants is getting "more and more serious." Since Google attacked Apple's iPhone with its own mobile phone, the Nexus, which includes a free operating system, and recently positioned its own music store to compete with iTunes, the two companies, previously on friendly terms, are now practically enemies.

All this aggressive activity isn't just the reflection of a struggle between two Internet ideologies, with Apple's control mania and its closed iCosmos on the one side, and Google's creed of the openness of the Web on the other.

Much of the rivalry between the two companies has to do with divvying up a business of the future: the online advertising market on mobile phones. Depending on the estimate, the market is currently worth between a few hundred million and $2 billion, but the prospects are seductive. Experts hope the market will eventually yield sales in the double-digit billions. According to market researcher IDC, Google currently sets the tone in the business, with its share of about 20 percent of the market.

The fact that Facebook and Google are making money with the data they gather on their users is already a sensitive issue. Mobile wireless providers in Europe like Vodafone and T-Mobile also gather plenty of data. But it raises new concerns that Apple, the device manufacturer, seller of content and marketer of apps, is now becoming a player in the business.

These concerns are underscored by the notion that Steve Jobs now knows just about everything about his customers. It starts with the purchase of Apple's devices. A customer who registers his iPhone provides Apple with his name and address. Anyone who wishes to use the iTunes Store to buy as little as a single song usually provides a credit card number. In addition, Apple can derive a wealth of other data based on user behavior, and on the answers to questions like: Who downloads which apps for his iPad, or films, songs and books through iTunes? Where and when does he do these things?

German Official: Data Traced to a Device Not Anonymous

When the first wave of outrage over the risks and side effects of Jobs' strategy erupted in the past few days, Apple didn't exactly try to downplay the privacy concerns. On the contrary, it didn't even respond to the critical question of whether and for how long the company stores the location data, and whether it might even have plans to derive mobility profiles from the linked information. "We don't provide any information about that," says Apple's spokesman for Germany.

Although customers have the option to decline personalized advertising and switch off the location services on their iPhones, this also means that they can no longer use them after that. Apple also points out that the data are collected anonymously. But German experts are skeptical.

Peter Schaar, Germany's federal commissioner for data protection, holds that data cannot be seen as having been collected anonymously if they can be traced to a specific device, especially when the company obtains the data from a phone and is familiar with the user's identity.

"In that case, (German) data privacy laws apply. Then the customer must be informed in advance as to which specific data are being collected and for what purpose, and whether and how the data are stored," says Schaar. This requirement, Schaar argues, is not changed by the fact that the information is subsequently made anonymous for further processing.