Executives who are able to produce halfway decent business figures have become a rarity in the current financial crisis. Thus it comes as no surprise that Louis Gallois, 65, visibly enjoyed his appearance at a press conference held in an aircraft hangar belonging to an aviation museum near Munich on Tuesday of last week. 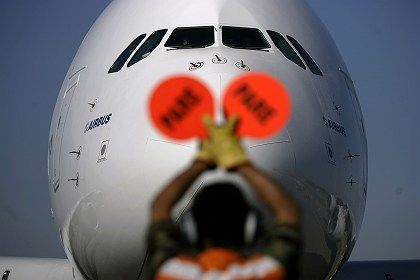 The Airbus A380: Emirates has delivered a damning list of defects with the aircraft.

Gallois, who is CEO of the European aerospace and defense giant EADS, was clearly in high spirits as he reported on the group's successes from the previous year. Sales rose by 11 percent and profits increased to about €1.6 billion ($2.1 billion). EADS even exceeded its internal cost-cutting targets.

But Gallois became significantly more subdued when he was asked about the coming months. He said that he had no idea how many -- if any -- aircraft orders will be cancelled by customers in the near future.

The A400M, a military transport plane which has been delayed for more than four years, also apparently poses a considerable potential threat to Airbus and its parent company, EADS. Gallois conceded that if the buyer countries pulled out of the prestigious project, the group would have to repay close to €6 billion ($7.8 billion) to their governments. This would put an enormous dent in EADS's ample financial cushion of around €9 billion ($11.7 billion).

There is another, even more pressing problem, one that the head of EADS preferred not to even mention. And yet it has triggered consternation at its most important subsidiary, Airbus.

In mid-February, senior executives from Airbus and the airline Emirates, the biggest customer for Airbus's A380, attended a crisis meeting in Toulouse to discuss the super-jumbo. Last summer, after a roughly two-year delay, the Arab airline took delivery on the first of 58 A380s it had ordered. The airline currently operates four jets in this series. Nine others are in use at Singapore Airlines and the Australian airline Qantas.

The Airbus executives could not have liked what they were told and shown by the Emirates representatives. In a 46-slide presentation, the aviation experts painstakingly listed what they viewed as the giant jet's serious growing pains. To illustrate their points, they included snapshots of singed power cables, partially torn-off sections of paneling and defective parts of thrust nozzles in the engines as evidence of what they described as a shoddy work ethic at Airbus and its suppliers.

The confidential manufacturer's information has since been leaked to employees, triggering a mood of panic. "Many good people have resigned and are trying to move to other projects," reports a concerned insider.

Airbus is doing its best to calm the waves. "We take our customer Emirates' criticism very seriously and are doing everything in our power to correct any reports of deficiencies as quickly as possible," says an Airbus spokesman. He also confirms a "number of individual incidents that have impaired the operation but not the safety of the aircraft."

Crisis meeting? Cable problems? These words are reminiscent of a humiliating chapter in the company's more recent history, one that Airbus managers and their CEO, Tom Enders, would rather see stricken from the annals of the company. Because of production problems and labor disputes in recent years, the mega-plane, celebrated by experts and aviation fans alike, has been the cause of vast amounts of additional work and a significant loss for its producers in the past few years. Some senior executives are even suspected of having lined their pockets through stock deals and of having concealed the true extent of the A380 debacle from outside shareholders for far too long.

Through a massive effort, the group did manage to deliver 12 of its flagship jets last year. It expects to build another 18 this year and hand them over to customers.

The problems seemed to have been corrected, and the company recently began a gradual shift from the costly and time-consuming manual assembly of the A380 to the long-planned commercial series production.

Airbus seemed to have cleaned up its act, only to be confronted by the incendiary information from the Middle East. The list of defects was long on clear language and short on diplomatic niceties.

On one of the slides, the experts provide a detailed list of the prestigious plane's various breakdowns. They say that the A380 has already been grounded nine times, which represented a loss of close to 500 operating hours. In 23 cases, say the Emirates managers, replacement aircraft had to be obtained at short notice. Minor glitches, the critique continues, happen in Emirates' A380 fleet about once every two days. In the medium term, the Emirates experts write, the airline could face the "threat of a loss of confidence in the aircraft and the brand image of the Emirates A380."

The Airbus managers want to make sure that this doesn't happen. They have sold only about 200 of their flagship jets to date. According to industry estimates, Airbus will have to sell about twice as many A380s to recoup its costs.

Enders and his staff are now doing everything possible to placate angry customers. Each individual problem report is analyzed and simulated. "Defects are traced back to their origin and corrected," explains an Airbus spokesman. "We have already made great progress in this respect in recent weeks."

In addition, the aircraft manufacturer is storing additional replacement parts directly on-site in places where the super-jumbo is now in use, so as to be able to respond more quickly to problems as they arise.

Airbus also plans to expand the rapid response team it created specifically to address A380 concerns. It is even considering making some changes to individual components. In private, Airbus executives point out that problems are also encountered with other new aircraft models when they are used in commercial aviation. Some 23,000 individual parts are used in the cabin area alone, managers say, meaning that teething problems cannot be ruled out completely. After all, they say, the reliability of all parts and systems can only be proved once the aircraft is in operation.

Whether these and other explanations will convince Emirates remains to be seen. In its damning presentation, the company also sharply criticizes the production processes at Airbus. For example, the Emirates report concludes, the A380 models were not sufficiently tested before being delivered to customers.

Experts, on the other hand, note that no other jet has ever been as thoroughly tested as the giant Airbus. Nevertheless, they say, not all conceivable scenarios involving every single part could have been simulated in the dry runs.

Some of the problems could hardly have been foreseen, such as one involving the plane's shower facilities. So far Emirates is the only A380 customer to provide two showers in first class. A determined female passenger who was unable to operate the showerhead promptly tore out the entire fixture -- and flooded the first class section.

The Emirates experts believe that Airbus should choose its suppliers more carefully and limit their numbers. They also say that the constant transport of parts and employees among Airbus's locations throughout Europe makes it more difficult to comply with prescribed quality standards. "Our work is well organized and properly inspected," counters an Airbus spokesman. He also points out that A380 production is becoming more and more normalized.

It is still not clear how the spat between the aircraft maker and its dissatisfied customer will end. Competitors Singapore Airlines and Qantas have also had to ground their A380 jets several times in recent weeks and months.

The Asians have had trouble with the fuel pumps and the on-board electronics. The Australians noticed that the highly sensitive measuring sensors in the tank were not working properly, although it is still unclear whether the problem was attributable to the devices themselves or was caused by impurities in the fuel.

Unlike Emirates, Singapore Airlines and Qantas have taken a more relaxed approach to the problems. However they, unlike the Arabs, have not just ordered dozens of new A380s.

Since the end of last week, the Dubai-based airline has however tried to defuse the conflict. "Technical problems are to be expected in a new aircraft, especially one in which so many new technologies are used," says an Emirates spokesman.

He is also quick to point out that order cancellations are not planned. The A380, he says, is an "outstanding airplane."