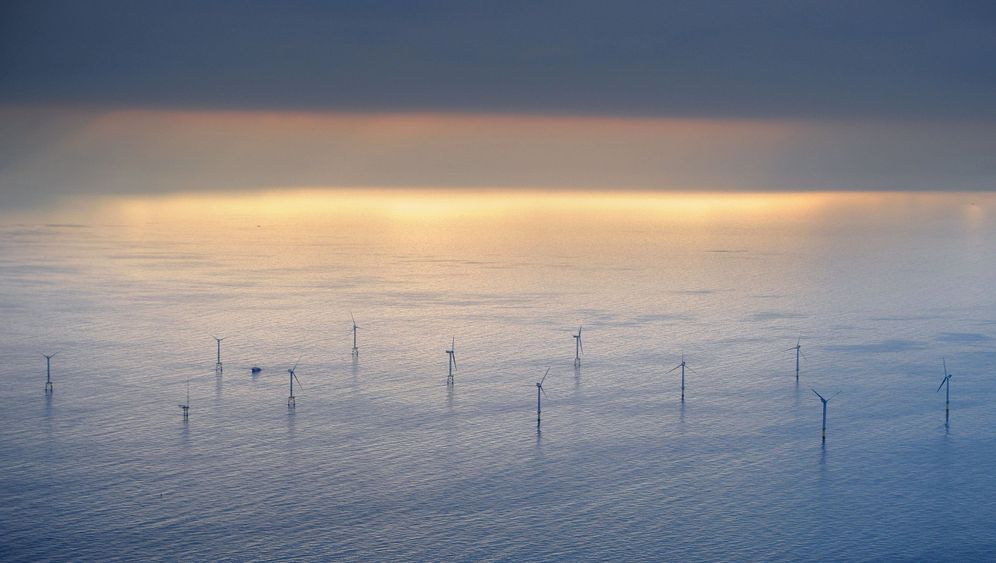 The generation of electricity from wind is usually a completely odorless affair. After all, the avoidance of emissions is one of the unique charms of this particular energy source.

But when work is completed on the Nordsee Ost wind farm, some 30 kilometers (19 miles) north of the island of Helgoland in the North Sea, the sea air will be filled with a strong smell of fumes: diesel fumes.

The reason is as simple as it is surprising. The wind farm operator, German utility RWE, has to keep the sensitive equipment -- the drives, hubs and rotor blades -- in constant motion, and for now that requires diesel-powered generators. Because although the wind farm will soon be ready to generate electricity, it won't be able to start doing so because of a lack of infrastructure to transport the electricity to the mainland and feed it into the grid. The necessary connections and cabling won't be ready on time and the delay could last up to a year.

In other words, before Germany can launch itself into the renewable energy era Environment Minister Norbert Röttgen so frequently hails, the country must first burn massive amounts of fossil fuels out in the middle of the North Sea -- a paradox as the country embarks on its energy revolution.

One of the central projects of Chancellor Angela Merkel's center-right coalition government, the scrapping of atomic energy and the switch to renewable energy, has hit a major obstacle. Nine months after the disaster at the Fukushima nuclear power plant in Japan, Berlin's multi-billion-euro project is facing increasing difficulties. And the expansion of the country's offshore wind farms in particular, which Minister Röttgen considers of paramount importance, is constantly beset by new problems.

On December 6 he received an urgent message from Leonhard Birnbaum, RWE's chief commercial officer, and Fritz Vahrenholt, who heads up the company's renewables division. The two men expressed their serious concern that "the timely realization of grid links" for offshore wind farms had become "dramatically problematic," thus seriously jeopardizing the expansion of the sector and therefore also the government's plans. "This development puts us in an extremely difficult position," the two RWE managers wrote.

The energy industry is currently under more stress than almost any other sector of the German economy. The country's utilities are being forced to completely change their focus: away from nuclear power; away from their centralized structure; and away from their accustomed business models. The quartet of E.on, RWE, EnBW and Vattenfall, which for so long have been spoilt by enormous profits, has had to implement tough cost-cutting measures, and countless jobs have been sacrificed. E.on alone is shedding up to 11,000 of its workers, and the industry as a whole could ax more than 20,000 jobs in all.

At the same time, the sector is forging aggressively into the business of regenerative sources of energy -- or at least that was the plan. Now it's becoming increasingly clear that the promised expansion will not progress as hoped due to a lack of the necessary conditions for its success.

Only this spring the German government set extremely ambitious targets. Electricity generated from wind, which blows much more consistently on the sea than on land, was to become the main source of Germany's new environmentally friendly power, backed by billions of euros in federal subsidies. So far 86 applications have been submitted for North Sea wind farms, though just 24 have been approved -- and only four are in operation.

According to the government's plans, capacities are to be increased to 7,600 megawatts by 2020 -- equivalent to the combined output of six or seven nuclear power plants. By 2030, the output is to be as much as 26,000 megawatts. However RWE's managers warn that even the more modest target for 2020 could be "missed by miles."

Their skepticism is based on sobering experiences with the HelWin wind farm north of the island of Helgoland. When RWE first applied for approval for its North Sea project two years ago, there was no evidence it would encounter any difficulties. The utility planned to invest about €1 billion to install systems that could generate output of 300 megawatts.

E.on and Blackstone also began hatching plans to set up wind parks in the allotted zone. The only proviso was that they would be connected to the existing power grid on the mainland within a reasonable period of time. The Federal Network Agency, the body responsible, assured them this would happen. A decree was issued demanding that a connection to the grid must be available within 30 months of the submission of an application.

Network operator Tennet, the Dutch company that had bought E.on's grid two years earlier, gave the green light for the project. In exchange for laying undersea cabling and building transformer stations, the Federal Network Agency promised to repay Tennet in the form of so-called "grid fees." By the summer of 2012 at the latest, it was promised, environmentally friendly electricity would begin flowing to the mainland through a massive submarine cable from the waters off Helgoland.

On the strength of that promise, RWE, E.on and Blackstone began making plans. RWE had ships purpose-built to help anchor the 100-meter (350 foot) high turbines to the seabed. The captains and crews of these ships were trained for their mission in special camps. The company even leased an area in the port of Helgoland itself so that it could transport the immensely heavy gondolas and rotors to their designated deep-sea destinations no matter what the weather conditions.

"Everything seemed to be going perfectly," RWE CEO Vahrenholt recalls. Until, that is, Tennet recently informed the utility about a change of plans. In a letter dated November 22, Tennet stated that inadequate funding and difficulties procuring the necessary equipment meant the envisaged timetable was no longer realistic. Completion would therefore be delayed by up to a year.

Tennet underestimated the challenges presented by the maritime venture, and the work at depths of up to 30 meters (100 feet) under water proved extremely laborious. "It's all a technical novelty," says Lex Hartman, the head of Tennet's German operations. Because of the weather conditions, engineers could only carry out much of the work between May and September, not least because the transportation of the necessary equipment couldn't be guaranteed outside this timeframe.

Then there was the expensive task of laying the cable itself. Some 85 kilometers (53 miles) of cables are required to connect the wind farms to the coast alone. Another 45 kilometers (28 miles) of lines are then needed to carry the power from the coast to the transformer station in Büttel near Hamburg, from where the electricity is to be transported to the relatively wind-poor southern areas of Germany along high-tension lines.

The business of offshore power generation -- with all its associated inherent imponderables -- is also uncharted territory for Tennet's suppliers like Siemens. The Munich-based electronics giant is building and installing four platform-based converter stations for Tennet, but the approval process has proved extremely complex and thus time-consuming. The HelWin1 and BorWin2 platforms were due to be installed as early as 2012 and be in operation a year later. Later, though, it became clear that only one of the two platforms could be installed on time.

The delays have far-reaching consequences for both the operators of the wind farms and the offshore sector in general. Without a grid to plug into, the turbines can't deliver any electricity to the mainland. And without the sale of "green" power, the multibillion-euro wind farms won't be generating revenues any time soon.

According to internal estimates, RWE alone could lose more than a hundred million euros. Delaying construction is no longer possible. The timing of shipping transports, supplies of materials and the use of specialized construction teams is simply too intricate to easily reorganize.

One particularly devastating consequence is that private investors, who only recently overcame their wariness about the technologically challenging business of offshore power generation, now have doubts once more.

Tennet says it has secured the €6 billion it needs to invest in its current projects. However the network operator is having a harder time finding investors for the plethora of plans it has for the future. Even the Dutch government is now starting to look into the possible fallout.

Following the setback in the North Sea, the utilities are themselves again discussing the merits of offshore power generation. E.on CEO Johannes Teyssen had planned to earmark several billion euros for the construction of three new wind farms weeks ago. But the bad news from Tennet and Siemens has sowed the seed of uncertainty in his mind too. Time and again, the projects have been tested for possible weaknesses, and their funding tweaked accordingly. Teyssen finally released the money just before Christmas, but his planners estimate that the projects' start dates will be pushed back by 12 to 18 months.

The delays on the high seas are a bitter blow for the German government's sensational about-face on electricity generation. Should the expansion of the offshore wind farms be delayed further still, this could lead to not only higher prices but also bottlenecks in energy supplies.

The utilities could presumably only alleviate such a possible shortage of electricity by importing nuclear-generated power from the Czech Republic or France. "Political blunders are carelessly threatening the hard-won faith in offshore technology," says RWE's clearly annoyed manager Vahrenholt. After all, it's the job of Germany's ministers and civil servants to guarantee the timely connection of the wind farms with the national grid.

Unfortunately both the politicians and the Federal Network Agency are ducking their responsibility. In their letter of December 6, the wind farms operators suggested offsetting the financial losses they would suffer by increasing or extending the feed-in payments for the offshore wind farms under the Federal Renewable Energy Act. They also demanded the introduction of legally binding connection deadlines for wind farms to allay investors' fears as quickly as possible.

The German government has yet to respond to the pleas. However there's little enthusiasm at the environment ministry for reopening the tough negotiations that preceded the passing of the Renewable Energy Act in the first place.

RWE's bosses say they won't be satisfied with that. If the government sticks by its hard line, the company vows to press for damages in the triple-digit millions. 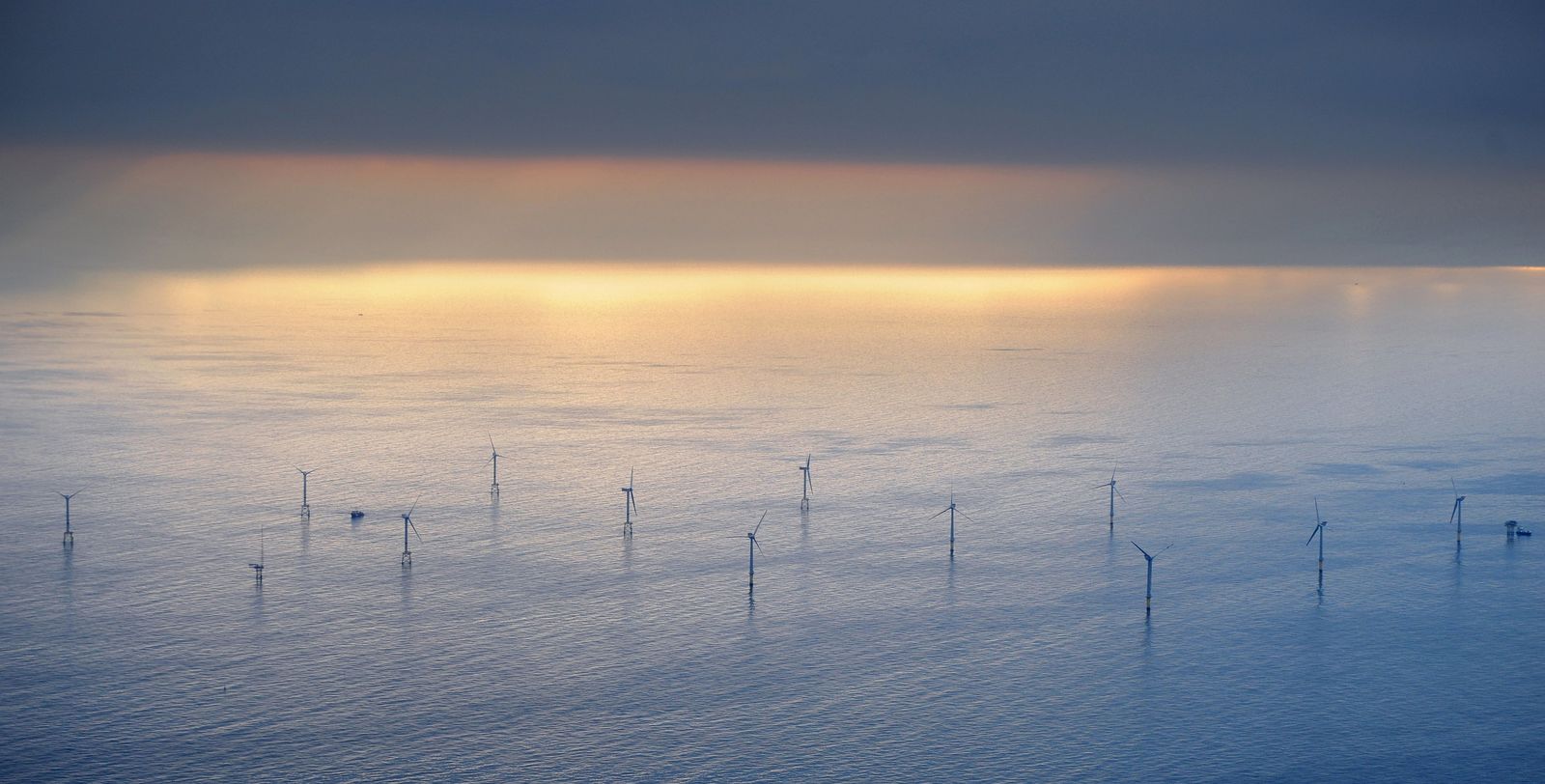 Germany last spring promised to moved ahead quickly to develop vast wind farms compensate for the decision to abandon nuclear power generation. The plan, however, has hit some significant snags. Here, the Alpha Ventus park in the North Sea.