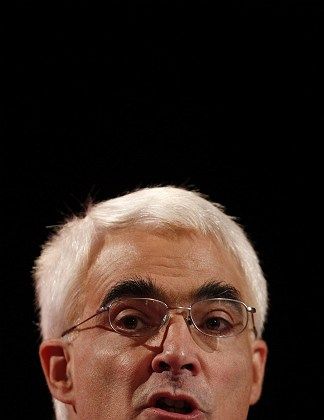 Britain's Chancellor of the Exchequer Alistair Darling might find his head below water soon. A slowdown in one of Europe's largest and fastest-growing economies would send ripples across the rest of the Continent.

Is this the proverbial other shoe dropping? Already reeling from the global credit crunch in the financial markets and the country's first bank run since the 1860s at mortgage lender Northern Rock, Britain is now exhibiting worrisome signs of broader economic distress. Aside from the impact on domestic jobs and income, a slowdown in one of Europe's largest and fastest-growing economies would send ripples across the rest of the Continent.

On Oct. 9, Britain's Chancellor of the Exchequer, Alistair Darling, cut the government's 2008 gross-domestic-product growth forecast from 2.5% to 3% to a revised range of 2% to 2.5%. Many independent analysts peg it even lower: Goldman Sachs, for instance, predicts 1.9% growth in 2008, down from an earlier estimate of 2.4%.

At the same time, there are new, troubling signs of inflation in material costs for British manufacturers. The double-whammy of slowing growth and rising prices will make for tough policy choices at the Bank of England, which has raised rates 1.25 percentage points since August, 2006, to 5.75%. Now, the bank may have to start loosening interest rates to stimulate growth, at the risk of encouraging inflation.

All of this comes on the back of a report from shopping comparison Web site uSwitch.com that finds disposable income in Britain is now at its lowest level since 1997. Prepared by consultancy Research Insight in Oxford, England, the study shows that over the last 10 years, discretionary income has dropped from 35% to 33% of gross household income, while social contributions and taxes have soared.

"Our paychecks may be getting fatter, but the chunk that we have to hand over to pay taxes, bills, and other living costs is growing even faster," says Mike Naylor, uSwitch.com's personal finance expert. "We are working harder, but we are not getting any wealthier. We are running just to stand still."

That's tough news for British consumers, who face an uncertain future as the economy struggles to come to terms with the fallout of the U.S. subprime crisis. The country's huge financial- and business-services sectors, which account for 30% of GDP, are gearing up for a correction. The Centre for Economics & Business Research estimates 6,500 jobs will be lost in London's financial sector during 2008. This is in stark contrast to the 11,000 jobs created this year -- and well below the growth of approximately 20% in the sector since 1998.

As the European economy with the closest ties to the U.S., Britain is feeling the impact of the U.S. mortgage and housing crash more acutely than counterparts on the Continent. But as credit dries up in Britain and the domestic housing market stutters, the pain is also popping up elsewhere. Major writedowns due to subprime exposure from the likes of Switzerland's UBS and Deutsche Bank have shaken Europe's financial sector. Similarly, home price appreciation in Europe, which had previously hit double digits in countries such as Spain and Ireland, now looks to have stalled as the cost of consumer lending increases.

"There's no doubt we'll see a reduction in consumer spending growth," says Michael Taylor, senior economist at London-based Lombard Street Research. "We haven't seen a great pick-up in real incomes, which will limit the amount of lending people are willing to take on."

Britain's slowing housing market won't help matters. According to mortgage lender Halifax, property prices fell 0.6% in September, to an average of $402,657, as mortgage approvals fell by 9% year-on-year. Housing prices also rose less than 1% in the third quarter of 2007, compared to 2.3% in the previous quarter.

The pain isn't limited to consumers and real estate. The British government's latest inflation statistics show raw material costs for manufacturers grew in September at their highest rate in more than two years, rising 6.4% in September from 12 months earliermore than twice the rate of analyst forecasts. In August, by comparison, the Office for National Statistics tracked an increase of just 0.7%, suggesting that prices have spiked quite suddenly.

Such rising costs, coupled with a reduction in consumer spending, represent a challenge for an economy still finding its feet after the recent financial volatility. Analysts think the Bank of England is now more likely to lower interest rates next year, by anywhere from one-quarter to three-quarters of a point. Morgan Stanley says the move would help free up consumer spending, as well as inject much-needed capital into the jittery equity and money markets.

Many experts remain surprisingly confident about Britain's long-term economic prospects. David Fenton, senior economist at the Royal Bank of Scotland, says the country's fundamentals remain strong, as export growth has offset declines in investment and consumer spending. "You can't go through an event like this [subprime crisis] without having a reaction," he says. "But the British economy is in good shape and should recover significantly by 2009."

Could be, but how long the downturn lasts will depend on a lot of outside factors, among them the state of the U.S. economy and China's continuing growth. One way or another, until a recovery shows up, Britain looks set for a bit of a rough patch.