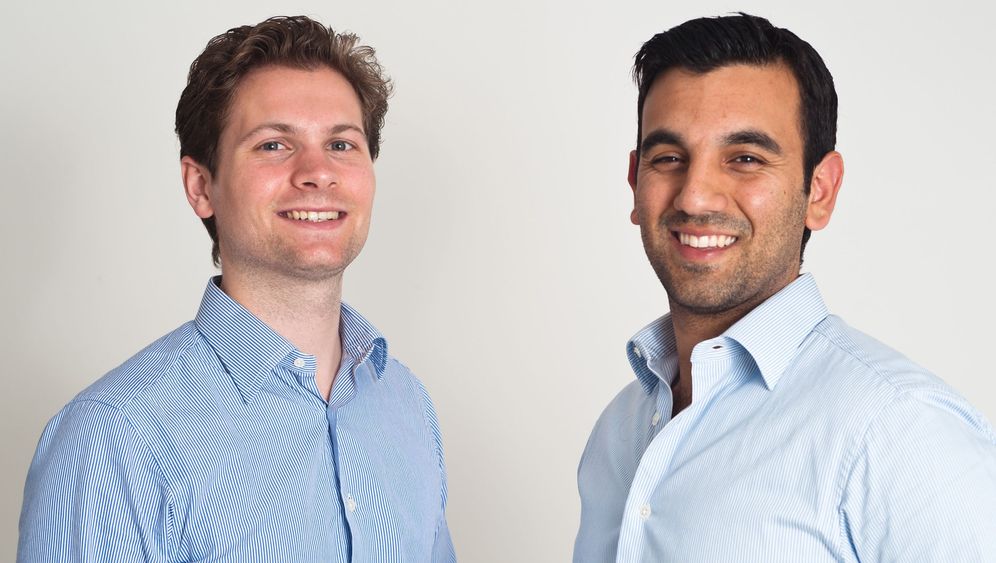 The way to the UPcload headquarters goes through a dreary courtyard at the Humboldt University in Berlin, up on a rickety elevator to the sixth floor, down a yellow-painted hallway to a staircase up to the seventh floor, through a glass door and down a deserted corridor, at one end of which is a small ladder leading to the flat roof of the university building. At the other end of the corridor are Asaf Moses and Sebastian Schulze, who are busy tucking into hummus, chicken and salad.

But they don't have much time for a snack break. In the hall, high school and university students are jostling. They are waiting to take part in a study that is expected to show just how little they know about their own body size.

Moses and Schulze, both economics graduates, will soon launch their Internet service UPcload. It is a website that uses a webcam to measure people to within a centimeter, and then shares the information with online clothing shops. If all goes well, the two young entrepreneurs could help the fashion industry achieve a breakthrough on the Internet.

With the study they are conducting, the UPcload founders hope to gain evidence that they can use to convince fashion companies of the value of their product. They explain that they want to prove, with the help of 500 guinea pigs, that people don't know their own body measurements. For Moses and Schulze, that lack of knowledge is one of the principal reasons why people don't buy many clothes online.

As Good as a Tailor

UPcload functions surprisingly well, as SPIEGEL ONLINE discovered in its own test of the product. All you need to do is load the website, turn on your webcam, take eight photos -- done. The whole process takes only three minutes and works in any living room, and yet the results are accurate to within a centimeter.

Moses can hardly contain his pride. "Our goal was always to be as good as a tailor with a tape measure," Moses says. "But we are usually even better." Their experiment with 500 volunteers, a full-body scanner, and a real tailor backs Moses up.

UPcload's trick is surprisingly simple. The user places a compact disc in front of his or her stomach while standing in front of the webcam. The fact that the CD has a standard size allows the photo-recognition software, with the help of some statistical magic, to calculate the exact body size, and check it for plausibility.

A Dream for Fashion Companies

Moses and Schulze are confident that the manufacturers will go along with the plan. Nowadays, a large proportion of all books are purchased online, but only 7 percent of clothing items, Schulze explains. "Almost half of all the clothes bought online are returned," he adds. The industry knows that it must do something about that state of affairs, and UPcload could provide a solution to the problem. The online shop would merely need to integrate a couple of UPcload buttons. The clothing manufacturer would also have to provide the site with its standard measurements.

Of course, Moses, Schulze and their colleagues have given much thought to other possible uses for their data. Possible applications could include fitness and diet programs, templates for custom-made computer game heroes and, naturally, also market research. The biggest body-size study to date measured a total of 13,000 people using body scanners. UPcload could record millions of data sets with sufficient accuracy. For fashion companies, it would be a dream -- even if some Internet users might feel uneasy about sharing data about their body measurements.

The UPcload idea has been very well received among programs to support entrepreneurs. The young businessmen have been showered with awards from, among others, the German Economics Ministry and the German E-Commerce and Distance Selling Trade Association.

'You Must Believe in Success'

Although the path to the UPcload idea and development may seem straight, in reality, it was as convoluted as the way to Moses and Schulzes' office in Berlin.

"In the beginning, it was hard to fall asleep," Moses recalls. "Although you know how badly things are going at the time, you must believe in success and convey your optimism to your co-workers and business partners."

The bureaucratic hurdles, the juggling of investors and ideas, and the constant poking around in the dark pushed the young founders to their limits. "We had a lot of money from our customers, but we did not really know if our idea worked," says Moses. "That was a terrible situation." It was especially true because Moses and Schulze themselves are not product designers but, rather, economists. The actual know-how was provided by a programming team in Israel, which was responsible for the technical implementation of the idea.

Start-up support was given primarily by Humboldt Innovation, a private subsidiary of Berlin's Humboldt University that aims to support spin-off companies. They provided the founders with money, rent-free office space and, above all, guidance navigating the bureaucratic maze. "We felt driven: We needed to do something, but we didn't know what," Schulze says, describing the situation a year ago. "In Germany, no one tells you how you start a company."

The city and country could greatly benefit from more innovators. "Berlin gains so much know-how in a short time from people like us," Moses says. "I am convinced that the money Germany has invested in us will be paid back by us many times."