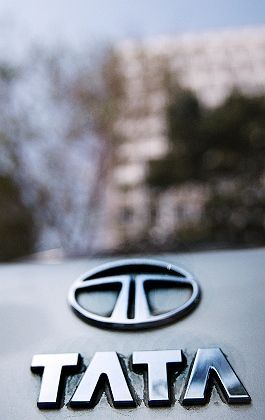 The Tata logo on a car in Mumbai, India.

India is about to become the frontier for high-speed, mobile Internet connections. On Mar. 4, India's Tata Communications , an emerging broadband player, announced the countrywide rollout of a commercial WiMax network, the largest anywhere in the world of the high-speed, wireless broadband technology.

Already 10 Indian cities and 5,000 retail and business customers use the product, and by next year Tata will offer service in 115 cities nationwide. The folks at Tata can hardly contain their excitement. "WiMax is not experimental, it's oven-hot," says Tata's Prateek Pashine, in charge of the company's broadband and retail business.

Of course WiMax is not new. Most everyone in the industry has been talking about it for years. Intel Chairman Craig Barrett has been propagating its virtues in pilot projects across the world, including India and Africa.

Sprint will be rolling out a WiMax network in Washington next month, and in other US cities next year. Until now the most advanced use of WiMax has been in Japan and Korea, where Japanese carrier KDDI and Korea Telecom offer extensive WiMax networks. However the Japanese and Korean services are not available nationwide -- KDDI will have its major rollout only in 2009 -- and most people use them as supplements to the wired services.

It's in emerging economies like India, where there is little connectivity and where mobile usage is soaring because of the difficulty in getting broadband wires to homes and offices, that WiMax is likely to see its full potential as a commercially viable technology. Intel, whose silicon chips power WiMax, has been pushing for this technology for some years and its executives are practically salivating at the thought of the successful rollout in India. "The more countries and telcos that get behind this technology the better," says R. Sivakumar, chief executive of Intel South Asia. Predicting that the new technology will make other types of Internet access obsolete, he boasts "Tata will set the cat among the pigeons."

Tata Communications has been working on setting this up for a couple of years, and successfully completed field trials last December. It has used the technology from Telsima, a Sunnyvale, California maker of WiMax base-stations and the leading WiMax tech provider in the world. For now, the technology will be restricted to fixed wireless, but Tata plans to make it mobile by midyear. The company has invested about $100 million in the project (€64 million), which will increase to $500 million over the next four years as it begins to near its goal of having 50 million subscribers in India.

Global tech analysts are will be watching carefully. Though WiMax is prevalent in Korea, the Korean service is a slightly different version, says Bertrand Bidaud, a communications analyst with Gartner in Singapore. It's a Korea-specific pre-WiMax technology called WiBRO.

But the Indian market is where the conditions for a WiMax deployment are the best, he says, because of limited fixed lines. That means Tata has fewer hurdles to overcome. And as WiMax scales up fast, it will give service providers greater flexibility and costs will drop equally rapidly. "If it doesn't succeed in India, it will be difficult [for it to succeed] anywhere else, and Bharti, Tata has been virtually asleep, with a limited subscriber base for its limited product. In fact, even with as many as seven broadband providers in the market, the total Indian subscriber base is just 3.2 million and there is no clear market leader. But with the WiMax rollout Tata can gain a leadership position and add "a few thousand subscribers a day," says Alok Sharma, chief executive of Telsima. Tata is, of course, going for the heavy-billing corporate customer -- a target audience that is beginning to make big investments in technology.

But also important is the ordinary Indian retail customer who can watch movies via WiMax and enjoy Tata's other unique offerings. For instance, users can take in an early morning worship service at the famous Balaji temple in South India. The temple permitted Tata to install cameras so that Hindu devotees from around the world could watch the proceedings in the temple around the clock. To get connected initially, users will simply have to go to a store, buy a router, install it, and then they become instantly connected. It will be as easy as buying apples, Tata executives promise.

The Tata rollout is a chance for India to become cutting-edge in mobile Internet services, say WiMax boosters. For India, which "always used last year's fashion to dress itself up," says Sharma, it is a chance to launch a brand new. fourth-generation technology that the world can follow. "India is becoming the knowledge center of the world; it should take the lead in this," he adds.