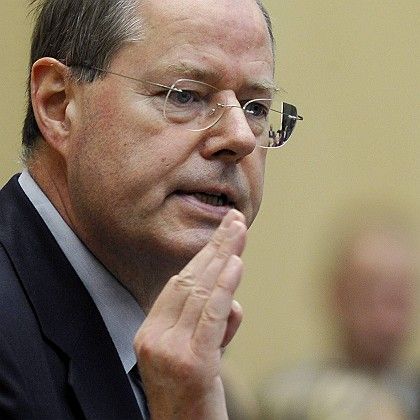 Peer Steinbrück doesn't mince words. Apparently, the Swiss don't either. On Tuesday, the finance minister called for Switzerland to be placed on an international blacklist of tax havens and accused the country's banks of helping German citizens to evade taxes. The Swiss reacted in anger, ordering Germany's ambassador to Switzerland to the Foreign Ministry for a dressing-down.

"Switzerland offers conditions that invite the German taxpayer to evade taxes," Steinbrück said. "Therefore, in my view, Switzerland belongs on such a list."

Swiss news agency SDA quoted Swiss Foreign Minister Micheline Calmy-Rey stating that the country's parliament, the National Council of Switzerland, was "unhappy" about the comments made by the politician with the center-left Social Democratic Party. She said her government had ordered her to express to the German ambassador their "surprise and displeasure" over Steinbrück's choice of words.

Steinbrück had spoken on Tuesday at an international conference in Paris. He said Switzerland should be placed on the Organization for Economic Cooperation and Development's list of tax havens. Steinbrück said Swiss banks worked openly with proven tax evaders.

Meanwhile, OECD chief Angel Gurria said the fight against tax oases and for greater transparency was now his top priority. By summer 2009, the OECD plans to issue its new blacklist. The list's release is expected to coincide with a conference to be held in Berlin on combatting tax oases. France has also joined Germany in leading the offensive to get the OECD to bulk up its black list.

French Finance Minister Eric Woerth told the French business daily La Tribune: "By mid-2009, we should have established a more realistic list of tax havens, and this would be an indispensable step to go further."

Although the OECD lists 38 countries that have adopted bank secrecy laws and are tax-free or have low taxation, French wire service AFP reports, only three -- Andorra, Liechtenstein and Monaco -- are listed for refusing to disclose information about their financial sectors. The French have called for an additional dozen countries to be placed on the list.

For his part, Steinbrück said if the OECD didn't make the move, Germany might act unilaterally to increase pressure on countries like Switzerland. "If the carrot doesn't work, we'll use the stick," Steinbrück said.

The anti-corruption organization Transparency International estimates there are 50 tax havens in the world, which collectively host "more than 400 banks, two-thirds of the 2,000 hedge funds and approximately 2 million letterbox companies." The organization estimates that close to $10 trillion (€7.3 trillion) is kept out of the reach of tax authorities worldwide.

Germany and France are betting that, as a result of the budget pressure the global financial crisis is putting on governments, it will be easier to get the OECD to expand its list in 2009, thus increasing pressure on countries that encourage illegal tax evasion.