The next time you get into a taxi in Germany and fancy some loaded emotional entertainment, just ask the driver about myTaxi. The answers will vary immensely according to who you ask: myTaxi is either the best thing since rubber tires or a despised "pile of crap," but nobody remains indifferent. "Driving a taxi is war," says a Hamburg cab driver, summing up the mood in the industry. "It's time for drivers to show where they stand."

myTaxi is a software that makes taxi dispatch centers redundant for smartphone users because customers can order a taxi without passing through an operator or dispatch center. The app uses GPS to send the customer's location to the nearest available drivers in the area within seconds. As soon as a driver accepts the job, the customer can monitor the taxi as it approaches on his mobile screen. For every mediated ride, myTaxi charges the allocated driver a set fee of €0.79 ($1.04).

The app has caused something of a war over how passengers and taxi drivers are brought together in Germany. The German Association of Taxis and Hire Cars (BZP) estimates there are around 260 million taxi passengers per year in the country, with total turnover of around €2.6 billion ($3.4 billion) in taxi fares. With such a lucrative trade, it's no surprise that taxi companies, who charge their drivers as much as several hundred euros per month to work for them, are striking back with everything they have: Threats, insults, bans and, if all else fails, copying the myTaxi concept.

Currently, myTaxi operates in 30 German cities and the company claims that 800,000 smartphone users have downloaded the app. Taxi drivers also support the app in Austria and Switzerland. So far, however, only a small percentage of drivers have registered with the service. By late January at the very latest, though, classic taxi dispatch companies began to consider myTaxi to be a potential existential threat. That's when Sven Külper and Niclaus Mewes, founders of the Hamburg-based firm Intelligent Apps, which created myTaxi, obtained a €10 million investment round in order to further develop the technology. The fact that a large share of the money came from Car2go, a subsidiary of automobile giant Daimler and the market leader in manufacturing taxis, riled many in the industry.

A few weeks ago, officials at industry association BZP wrote a letter to Daimler Chairman Dieter Zetsche. "We're fuming with disappointment and anger," the letter read. For the taxi industry, the letter stated, the deal was like a "slap in the face." The officials accused Daimler of making a pact with the devil.

When it comes to fighting this new enemy, representatives of taxi dispatch companies aren't pulling any punches, either. myTaxi's owners complain that they were even denied recent access to an annual convention of the taxi industry in Hanover in November.

In Nuremberg, meanwhile, the city's dispatch company has advised its member firms to forbid their drivers from using myTaxi and to threaten to fire them if they do. Following a 2009 ruling by the Higher Regional Court in Frankfurt that a driver has the right to work with multiple taxi agencies, however, that course of action is legally questionable.

Some learn the extent to which taxi companies are willing to go to preserve the status quo the hard way. With 37 years of experience behind the wheel, Hilmar Franke is one of the taxi drivers who has worked the longest for Taxi Pay, Berlin's largest taxi dispatch firm. In addition to registering with myTaxi in order to attract more passengers, Franke also applied the company's black and yellow logo to the door of his taxi. He promptly received a letter from Taxi Pay demanding, in no uncertain terms, that he make a decision: Us or them.

A Pact with the 'Devil'

Taxi Pay owner and CEO Hermann Waldner says it is not his intention to ban his drivers from using myTaxi. But when it comes to advertising his rivals' services, he believes drivers "should be able to recognize what the limits are."

Officials at myTaxi take a different view. Noting that most cabs in Germany are owned by the taxi drivers themselves, myTaxi co-founder Külper says that determining what advertising can or cannot be placed on the side of a vehicle should not "be the decision of the taxi company, but of the car's owner." He said his company is investigating the incident involving Franke and that, if necessary, it may even "initiate legal proceedings against Taxi Pay".

The company has enjoyed some legal successes already. In neighboring Austria, myTaxi succeeded in getting the competition authorities to take up its case and pass it along to the Cartel Court for review after some taxi dispatch companies in the country also forbade their drivers from working with the smartphone app. Meanwhile, in another Austrian case, a court ruled in favor of app creators Mewes and Külper. A Viennese dispatch firm was officially reprimanded after it copied myTaxi's website and logo.

In Germany, too, taxi dispatch companies appear set to fight the unwelcome competition from myTaxi by giving the online upstart a dose of its own medicine. They've created the platform taxi.eu -- which recently launched its own app and is available in 60 different cities through 40,000 registered cars, according to its website.

So far, though, taxi.eu has attracted attention mostly for its dubious practices. An anonymous person, supposedly a user of both taxi apps, has been posting derogatory remarks on numerous blogs about myTaxi -- while offering praise for taxi.eu. However, part of the blogger's IP address could be traced back to a server operated by Waldner's firm Taxi Pay. For his part, the CEO says the whole issue is much ado about nothing. If a driver is peeved "because myTaxi claims every day that it wants to eliminate the dispatch centers, then I can understand that," Waldner says. Besides, he adds, he "can't control every one of his 140 workers".

Meanwhile, veteran driver Franke has made up his mind. He would rather participate in progress in the taxi business than battle against it. In December, he gave notice to cancel his contract with Taxi Pay, his former employer. Now he is driving almost exclusively the smartphone generation. 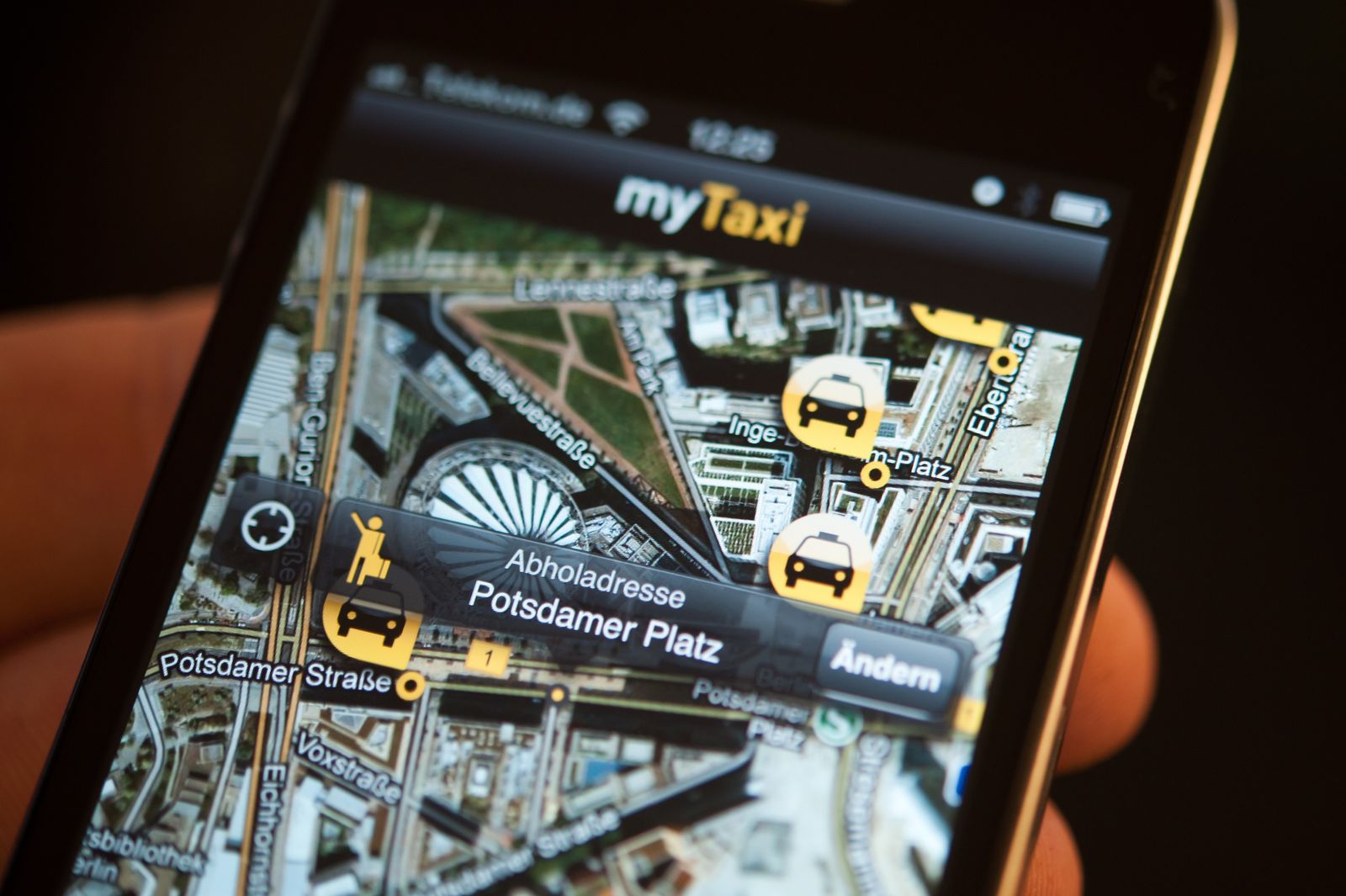 The taxi-booking app myTaxi is fast becoming a competitor to the traditional dispatch business in Germany.