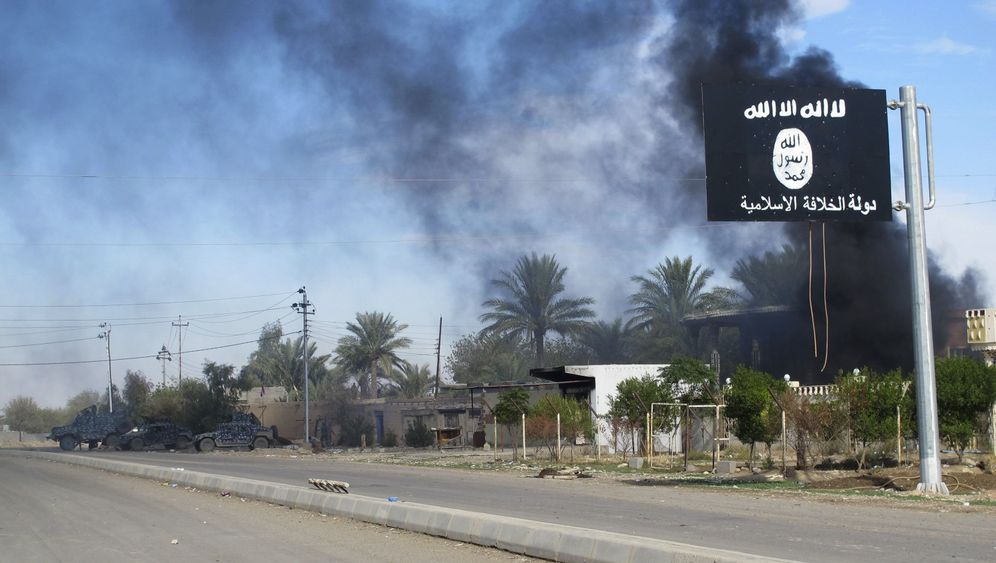 SPIEGEL: Professor Shelley, leaving aside the victims for a moment, what does a terrorist attack actually cost the terrorists?

Shelley: At first glance, it is less than you think. To obtain weapons or to train a small group of terrorists is not excessively expensive. Take 9/11 as an example: The costs are estimated at only $500,000. But I think this is the wrong approach for a calculation. The essential question here is: What are the costs of maintaining a terrorist organization? You need tremendous logistics, you need to keep all the fighters motivated, you have to take care of the families of terrorists who are killed, and so on. You need many millions.

SPIEGEL: In your new book, "Dirty Entanglements: Corruption, Crime and Terrorism", you write that every terrorist success story starts like the establishment of a successful business: with the collection of seed money. In al-Qaida's case, the money originated from Osama bin Laden's fortune. Where does Islamic State's seed money come from?

Shelley: From two sources. The antecedents of IS received donations from the Gulf States, but now it has smaller, new contributions from many locales. The smuggling routes they are now using were also used during the post-invasion period for low-level smuggling -- of cigarettes and pornography.

Shelley: Yes, I was also surprised that there was such trade in the region now under IS control. Now, IS is financing itself largely through the oil trade, but also many other activities. It is a diversified criminal operation.

SPIEGEL: What sort of activities?

Shelley: With looted art from the occupied territories, for example. It is sold via Ebay, at art fairs or in premium antiquarian shops in Europe. But that does not really bring in a lot of money because the market is limited. The terrorists think quite broadly about their sources of financial support and the number of potential customers for expensive items is small. IS taxes trade, they make money from the passports sold by foreign fighters, they sell mobile phones, trade in illicit cigarettes and engage in kidnapping as well as human smuggling and trafficking. And, of course, the arms trade. Other terrorist groups make money selling pirated CDs and DVDs. Counterfeit goods, forged passports and documents, the illicit wildlife trade and drugs earn a lot for terrorist groups.

Louise Shelley, 62, is the founder and director of the Terrorism, Transnational Crime and Corruption Center at George Mason University. She is the author of "Dirty Entanglements: Corruption, Crime and Terrorism", which was published last July.

SPIEGEL: How do the trade routes work for such illicit deals?

Shelley: They simply use traditional trade relations. The connections between Iraq, Syria or Turkey are hundreds, if not thousands, of years old. They were parts of common empires throughout history. Corruption of officials allows products to cross borders.

SPIEGEL: Does that mean that terrorist organizations are connected to organized crime from the very beginning?

SPIEGEL: Is it not actually taboo for jihadists to cooperate with regular criminals?

Shelley: An interesting question. A lot of experts I talked to say that for the Islamists, criminals are "usable". They are not untouchable. You can recruit staff for the jihad from among criminals by promising them that they will be cleansed of their sins. That is quite an attractive offer for Muslims. Within IS are a lot of fighters with a criminal past.

Shelley: What IS is teaching is not Islam. The terrorists have reinterpreted Islam for their own purposes and they use this distorted Islam to justify their actions. They do many things that are against Islam. When Imams in Turkey and Saudi-Arabia re-educate former terrorists, they explain that they have interpreted the Koran falsely.

Shelley: Yes, that's right. By now, many IS documents have been confiscated. In analysing them, you notice that the group is managed like a regular business. With IS, as with other terrorist groups, there is proper bookkeeping with a meticulous listing of incomes from different sources and an offset of the expenses for salaries, bribery or weapons. Terror is also a business -- a good one. Because terrorists operate like a business, it is important to go after them with a variety of legal measures and not just criminal law. Germany is now focusing on penal law but it has long experience with administrative and regulatory law that would be very helpful in addressing the facilitation of terrorist business practices.

SPIEGEL: We don't want this to sound nostalgic, but what happened to old school terrorism? Did terrorist groups not have ideological goals in the past?

Shelley: There has been a huge transformation in international terrorism since the end of the Cold War. With the decline of state support for terrorism, terrorists have turned more to crime. But even groups like the IRA were deeply involved in criminal business and, at some point in time, became more like criminals than like terrorists. If you continuously need to gather money for your operations, that eventually becomes the center of your thinking rather than ideology. Still the old alliances between terrorism and crime differ from the modern ones.

Shelley: Take the Mafia as a traditional form of trans-national crime. They depended on the state for contracts. Both the mafia and the Yakuza in Japan grew after World War II along with the postwar economies of Italy and Japan. The Mafia became so powerful because it used state structures in Italy and infiltrated them even up to top government circles. It grew with the state and became rich. The Yakuza in Japan proceeded similarly. They were part of the system and benefited from it. That is also the reason why they did not attack the state like terrorists do. Today, there are global networks for both crime and terrorism that operate outside the state, and that is why it is much easier for both criminals and terrorists to operate globally.

Shelley: It is more complicated than that. Groups like IS are closer to the historical trade traditions of the Middle East than to the industrial capitalism we know today. That is why they are more focused on generating money by trading in oil, other raw materials or goods to finance their terrorist organization. That is why they also launder their money through trade-based money laundering.

SPIEGEL: It appears that terrorist groups and international criminals are among those who have profited from globalization.

Shelley: Indeed. We still think in state structures. And on the other side are these groups that use the opportunities of globalization and the vanishing of borders for their own purposes and earn money with it.

SPIEGEL: The revenues from all these commercial operations need to be transferred from one place to the other. How important is the Hawala system -- the transfer of money via trusted persons without the use of banks?

Shelley: Of course Hawala belongs to the system. But it is not as though everything goes through informal systems; the money also intersects with the legitimate economy. Oil smuggling involves more than criminal and terrorist groups. Already in Saddam Hussein's Iraq, members of his Baath Party participated in it and some former Baathists are part of IS and are still participating in the oil trade today. It is not just a dirty entanglement of terrorists and criminal groups within the state machinery. It is a trade that interacts with the licit economy of trucks, tankers and banks -- not only in Iraq, but worldwide.

SPIEGEL: Is cybercrime among the business sectors that terrorist groups participate in?

Shelley: An interesting point, because nobody talks about it. When I talk to government representatives, they tell me that we have to bomb IS territory to deprive them of the possibility of continuing to earn money with the oil trade. Then I say: And you believe that is how you end terrorist financing? This is one of the basic mistakes in counter-terrorism: We talk about following the money. Then, investigators look back at what these groups did to make their money in the past. But terrorists think like businessmen. They ask themselves: How can I make money today and tomorrow? And cybercrime, of course, is part of that. Members of the al-Qaida affiliate responsible for the devastating Bali bombing in 2002, that killed 202 people, were sent to prison in Indonesia. There, one of the leaders raised money for the cause through Internet crime. There is more than a decade-long history of al-Qaida involvement in fundraising through the Internet.

SPIEGEL: Does that apply to IS as well?

Shelley: At the moment, the group makes so much money with oil that they do not need cybercrime. But of course it possesses the capabilities. You only have to look at how professionally they use computer technologies, the Internet and its social network capabilities for their public relations activities and recruitment. Additionally, these groups are connected globally, exchange information and learn from each other. Therefore, the past experience of al-Qaida is available to them.

SPIEGEL: In Germany everybody talks about terrorism, but few talk about organized crime. Is there an underestimation of the danger that results from the blending of these two sectors?

Shelley: I have noticed that in Germany there is little research on the linkages of these phenomena. There is also little basic analysis on the non-traditional security challenges facing Germany today. Germany is surrounded by many regions of the world where dirty entanglements are pervasive -- North Africa, the Balkans, and the Middle East. Germany does not control its borders any more. Yet there is little analysis on the consequences of this for Germany. Few researchers are studying the reasons for, and the dimensions of, illicit migration into Germany. In my conversations with the German government, I talked about an African country that nobody has on the radar, but because of its abundant natural resources, dozens of trans-national criminal organizations are active there. I was asked: How do you know that? And I replied: Because I do research! Germany was once known for its research tradition. It should remember that.

SPIEGEL: What role does Germany play when it comes to the business dealings of international terrorist groups?

Shelley: Think about the attacks on the World Trade Center on 9/11. It was partly planned and prepared in Hamburg. Germany did not pay attention to the problem of international terrorism then -- this country provided a good retreat for such groups. Today, IS in Germany recruits hundreds of volunteers to support terrorism. Part of the many millions of dollars that were embezzled at the Afghan Bank have been run through Germany. The heroin that helps support the Taliban likewise comes to Germany. There is no doubt: The problem of international crime and trans-national terrorism is a problem for your country, too. 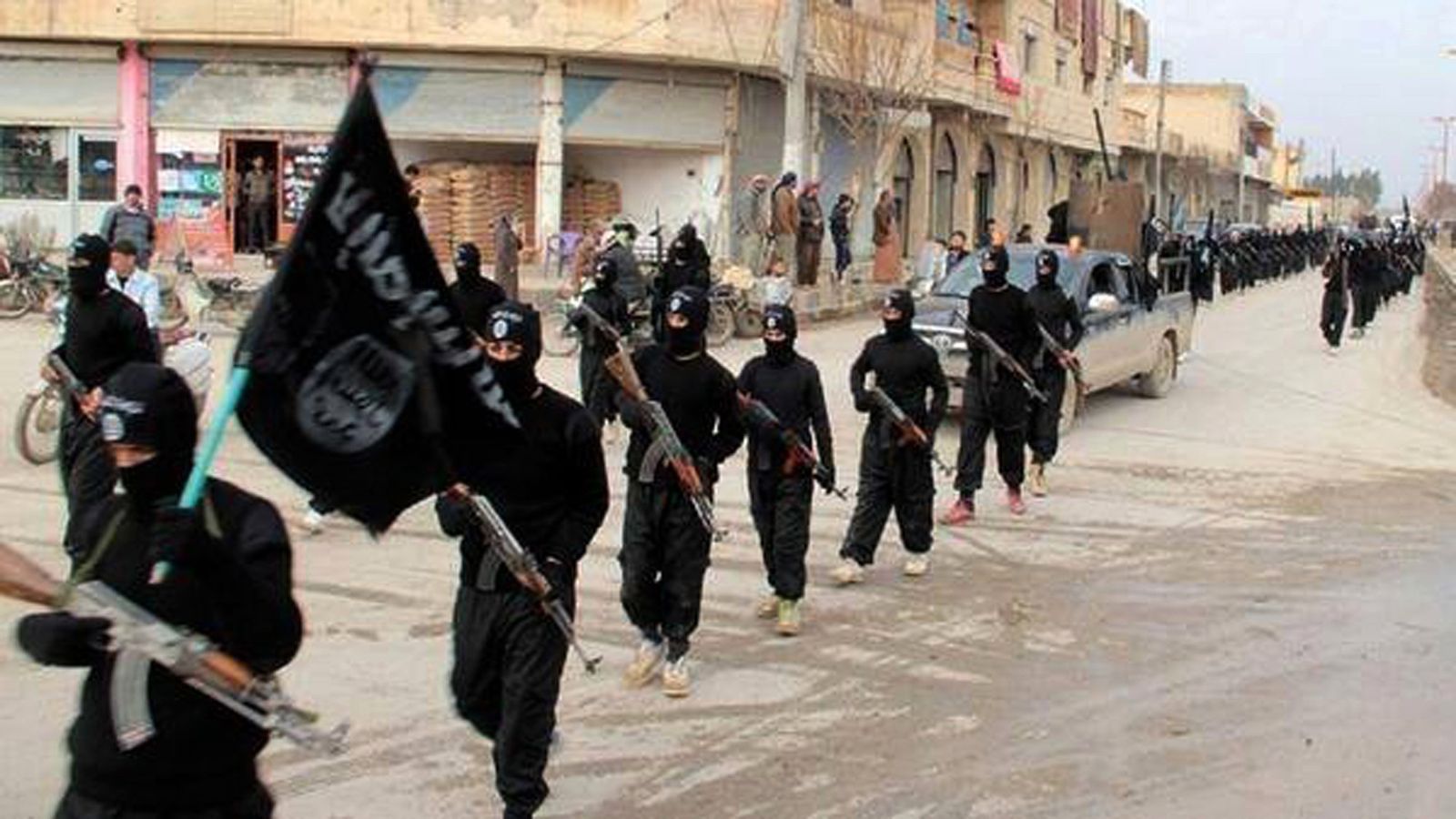 Terror researcher Louise Shelley says that Islamic State operates much like a criminal syndicate, taking advantage of every possible opportunity to generate revenues. Precursors to the IS, she says, even participated in the pornography trade. 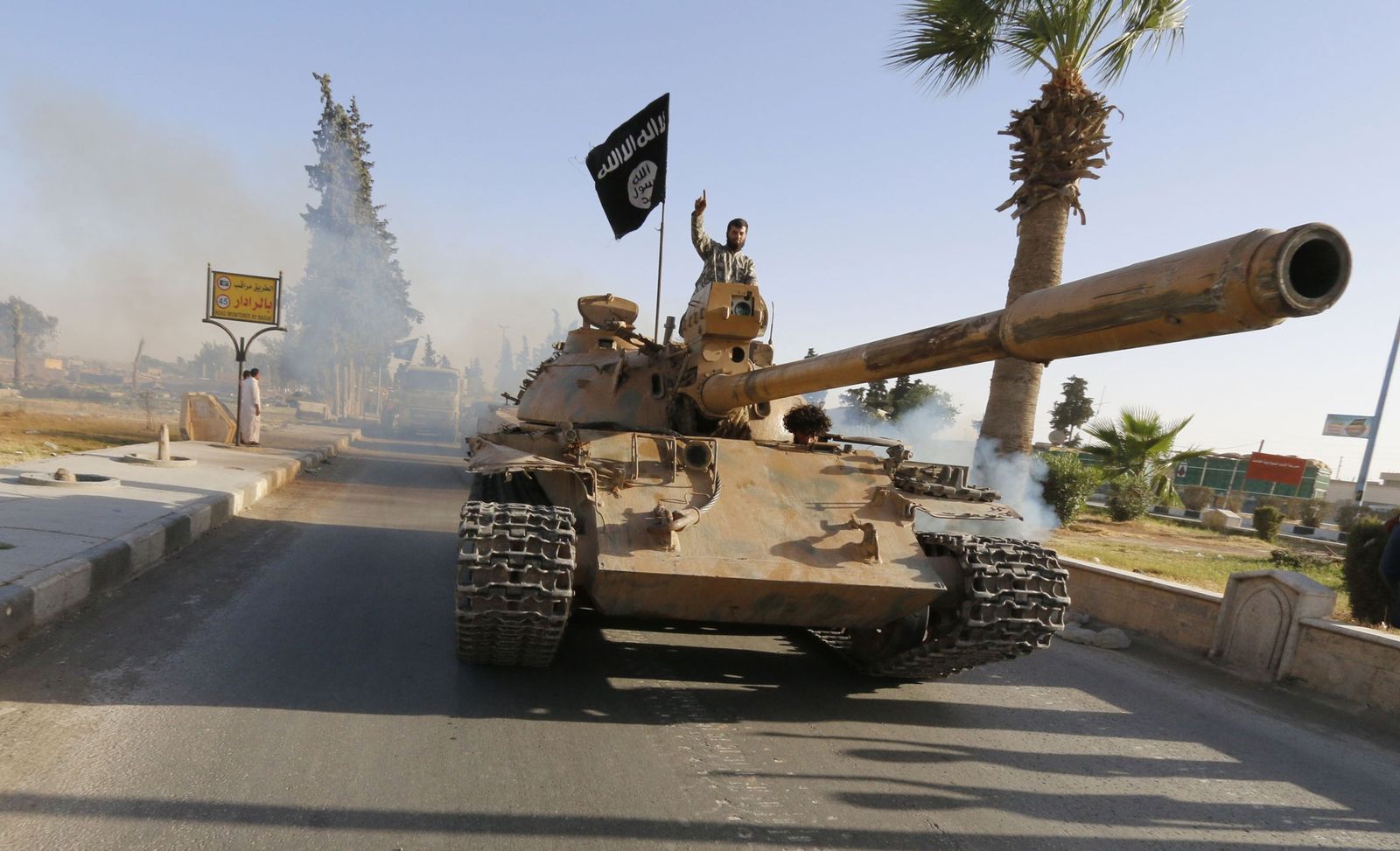 "To obtain weapons or to train a small group of terrorists is not excessively expensive," says terrorism expert Louise Shelley. "Take 9/11 as an example: The costs are estimated at only $500,000. But I think this is the wrong approach for a calculation. The essential question here is: What are the costs of maintaining a terrorist organisation? You need tremendous logistics, you need to keep all the fighters motivated, you have to take care of the families of terrorists who are killed, and so on. You need many millions." 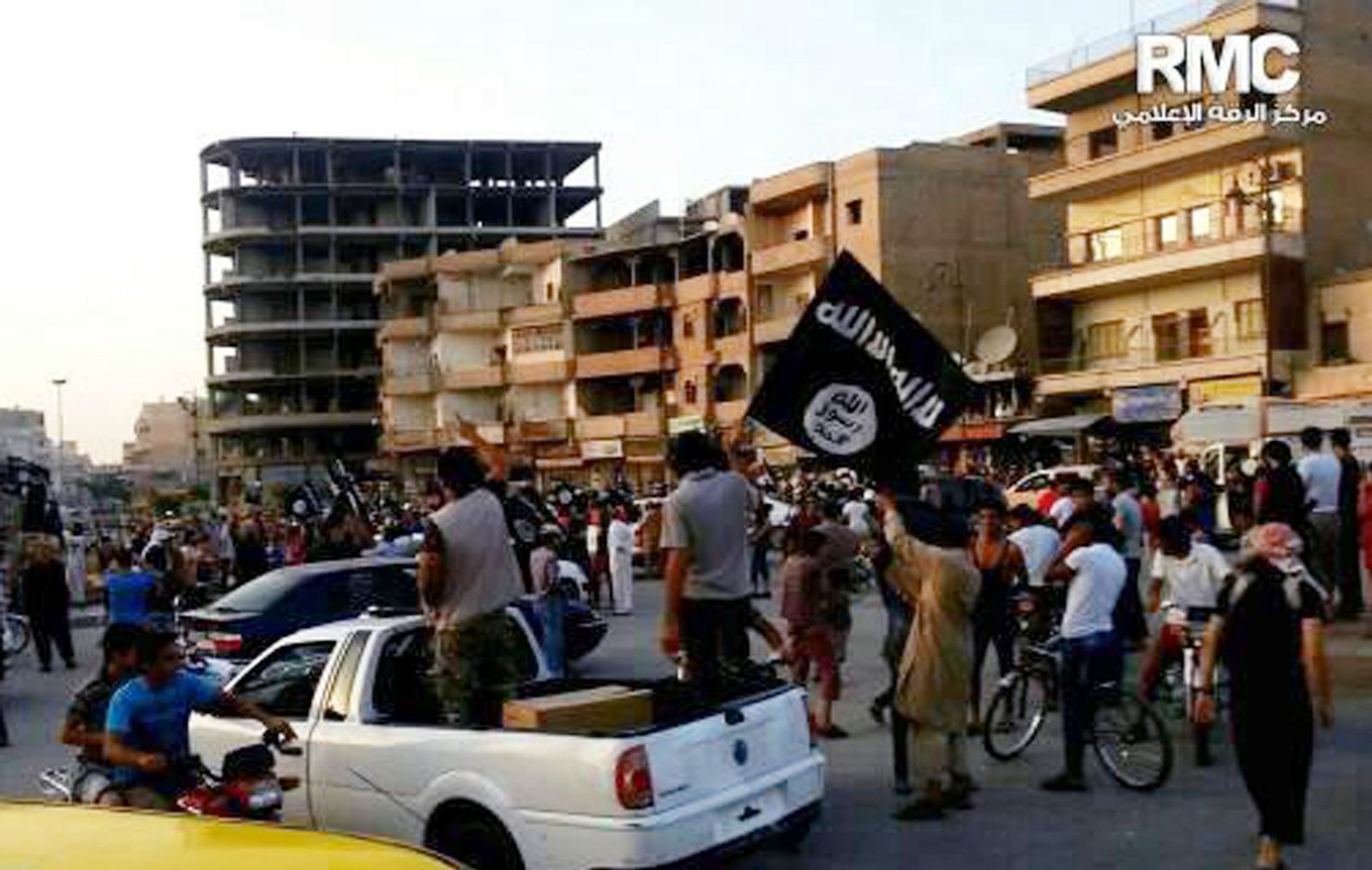 Fighters belonging to Islamic state in June 2014 in Raqqa, Syria. While much of the group's funding comes from the oil trade, it has also sought to sell looted works of art via Ebay or at art fairs, says terrorism expert Louise Shelley. 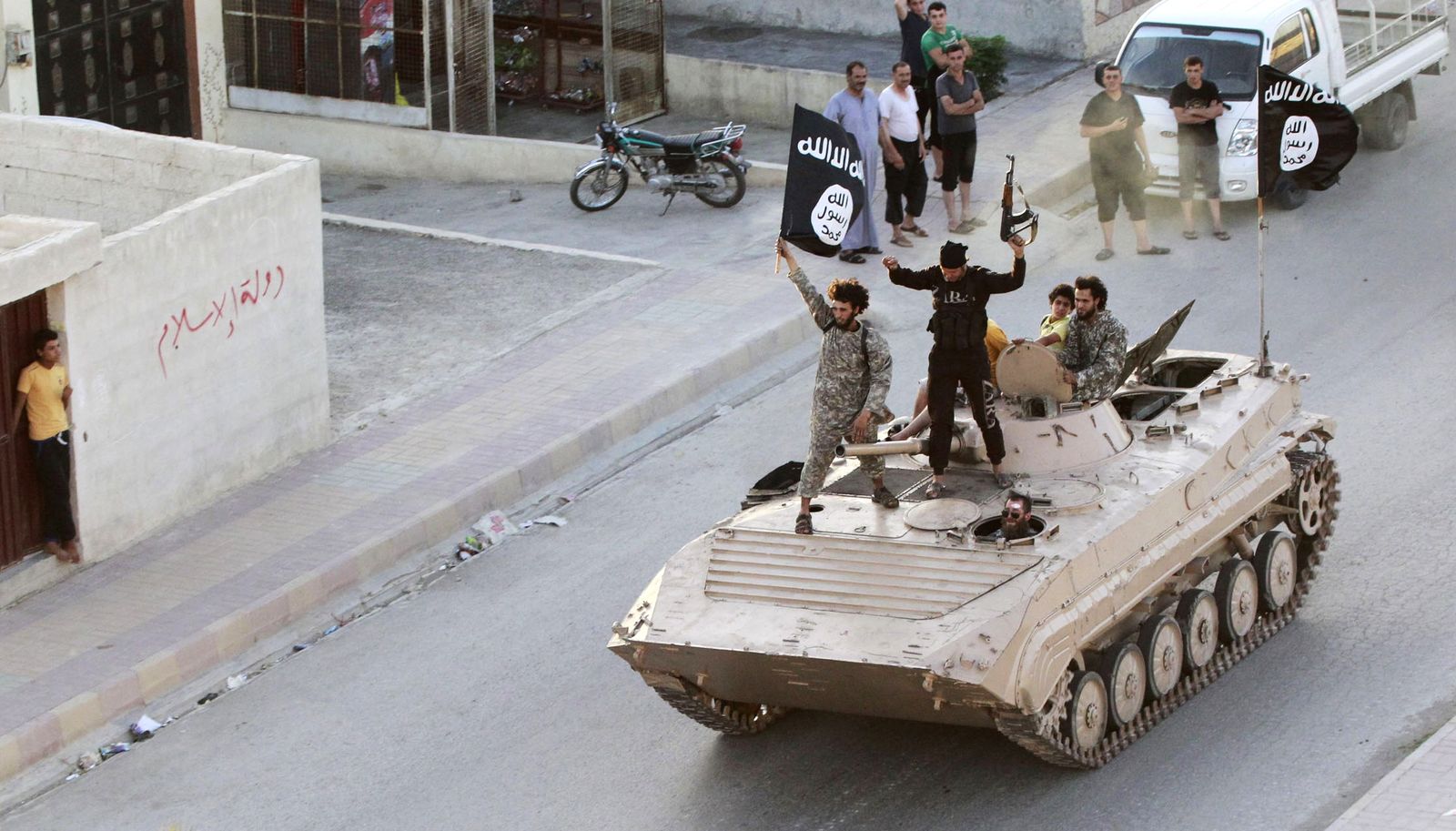 IS, says Shelley, is operated like a regular business with extensive bookkeeping monitoring revenues and expenses. "Terror is also a business," she says, "a good one."